There Will Be Blood: Chaim Soutine at the Jewish Museum

“His paintings reflect the route from Louvre to butcher shop to studio, a private map of an emigre who belonged to no national movement and who created his own style.” 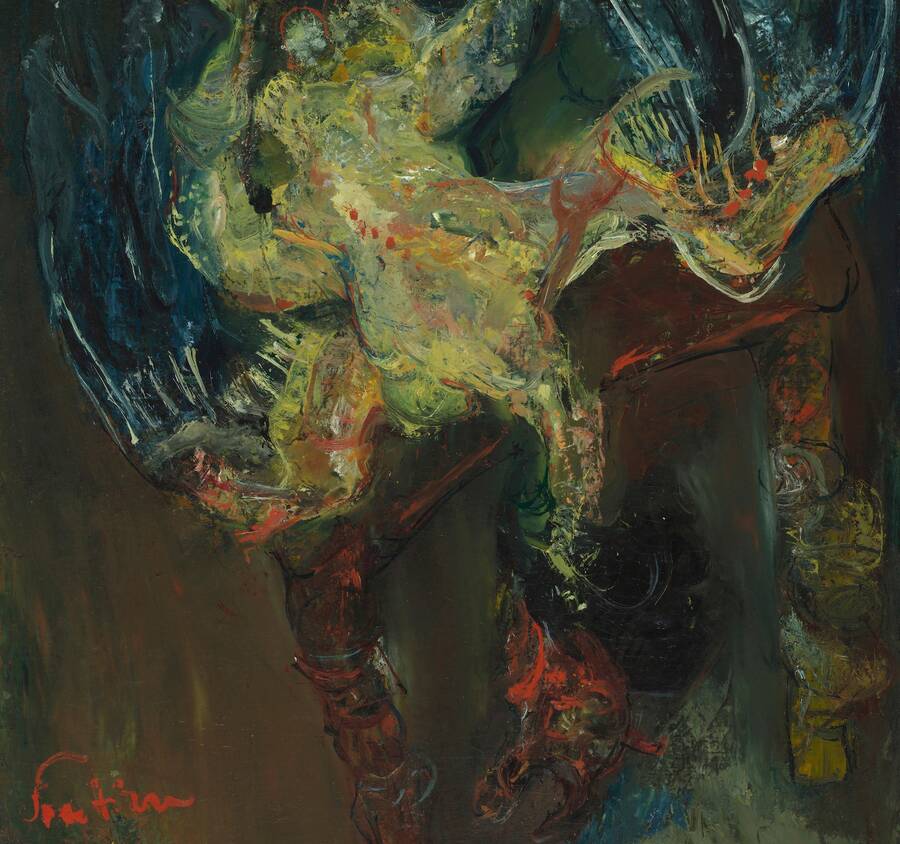 "WHAT IS THE MEANING of this art, whose origin is undefinable, which knows no law, no fatherland, and no directive principles, and is linked to no tradition? That of an exile or a barbarian?”

A critic named Waldemar George posed these questions in 1928 about the strange, ferocious art of Russian-Jewish painter Chaim Soutine. George (originally Jarocinski) was an upper-class Polish Jew who’d moved to Paris only two years before Soutine did in 1913. But whereas George assimilated to a French culture that felt uneasy about the many foreign artists in Paris, Soutine had no home but the margins. With the freedom of an outsider and the habits of a fanatic, Soutine produced works that still have the power to startle and darkly enchant, as a new show at the Jewish Museum, "Chaim Soutine: Flesh," makes forcefully clear.

Though he meant it as a partial compliment, George represented Soutine’s Jewishness (“no law, no fatherland”) in a way that echoed the era’s worst rhetoric about rootless Jews destroying native European culture. In more recent decades, Jewish scholars have tried to locate the origin of Soutine’s turbulent art in the extreme poverty of his childhood shtetl or as a rebellion against the ban on “graven images.” But more interesting than either the smears or the search for Jewish roots is the way that Soutine’s position as a foreigner in Paris shaped his process, if not his themes. When he arrived in Paris, Soutine spoke almost no French, carried almost no money and had almost no formal training. What classes Soutine signed up to take, he left after a few sessions to tutor himself at the Louvre, where he grew fascinated by old master depictions of dead animals. Refusing to paint from memory or photographs, he bought fresh carcasses from the butcher shop and hung them in his studio, heedless of his neighbors’ protests. His paintings reflect the route from Louvre to butcher shop to studio, a private map of an emigre who belonged to no national movement and who created his own style by combining the raw presence of decomposing flesh with the classic paintings he revered.

Most of the 31 paintings at "Chaim Soutine: Flesh" are technically “still lives” (nature morte, or “dead nature,” in French), but few painters had the same ability to bring inanimate objects to life. An early work, Flowers and Fruit (1918), is more bonfire than bouquet, as a clutch of gnarled flowers leap out of a vase, nearly grazing the top of the canvas. Soutine’s brushwork is so fluid and expressive that in an early work, Still Life with Fruit (1919), it’s unclear whether the sharp object behind the bowl of cherries is a bloody herring or a red-handled knife. He painted with such violence that, in one of the Soutine legends that substitute for our scant knowledge of his biography, he dislocated his thumb while feverishly painting and afterwards had no idea how it happened. The legend resonates with the central drama of Soutine’s work: the relationship between pain and paint, both for the dead animals and for the tormented artist.

From the initial gallery of fruit, flowers, and herring, the visitor enters a room that displays Soutine’s macabre yet beautiful paintings of dead fowl. Soutine once claimed that his whole artistic project was to free a cry in his chest that he felt while watching a butcher cut the throat of a goose. His dead animals are both the cause of the cry and ventriloquists of the cry: they scream on his behalf. Soutine depicts the fowl as eerily human, their mouths open for one last wail, their necks detached from their bodies, as if broken by a dense swirl of paint. In Dead Fowl (1926), the bird sprawls with its head dangling upside-down off a chair, but Soutine focuses in so closely that the bird looks to be in free-fall. The contorted body is a blast of glowing yellow, while the celestial, blue-toned wings look like something Soutine might’ve encountered on the walls of the Louvre.

In 1923, the American collector Albert Barnes discovered Soutine’s work and purchased 52 of his paintings. The sudden income and recognition increased Soutine’s purchasing power at the butcher shop, and the next room showcases a series of beef carcasses from the mid-1920s. Like many expressionists during the interwar period, Soutine was accused of “glorifying the ugly,” and the tension between gruesome subject matter and the virtuosic use of paint comes to a head in this room, where the depictions are the least humanized and the most painterly. It’s no surprise that later artists such as Francis Bacon and Willem de Kooning were enthralled by Soutine’s work: a single patch of color in Flayed Ox (1925), where Soutine restaged a famous work by Rembrandt, would make for a strong abstract painting.

The final room features three paintings of live animals that Soutine created in the 30s and early 40s. The presence of frail but resolutely not-dead animals comes as a shock after exiting Soutine’s morgue. It’s unknown how much the political climate impacted his work (Soutine also destroyed many paintings and never dated them), but one wonders if he painted live animals as a psychic counterbalance to a world in peril. Even before the war, the reactionary press turned against the foreign artists in France, and in 1931, the critic Waldemar George accused painters like Soutine and Chagall of “a spirit of Francophobia.” When the Nazis invaded, Soutine was separated from his lover, a German Jew named Gerda Groth, and forced into hiding despite his bad health. When his stomach ulcers erupted in 1943, it took 24 hours to bring him to a hospital, where he died in surgery at age 50.

That Soutine is less famous than other great Jewish expressionists of the interwar period like Marc Chagall or Amedeo Modigliani—the former a favorite with nostalgic Jews and the latter a favorite at the auction house—is a testament both to his early death and to the frightening complexity of his portraits, his landscapes, and above all, his still lives. Chaim Soutine: Flesh is not for queasy stomachs. Unlike at a Chagall exhibition, tour groups and schoolchildren won’t arrive by the busload to soak up a testament to Jewish perseverance. Lovers of great painting, however, should seize on this encounter with one of the most underrated artists of the 20th century.

"Chaim Soutine: Flesh" is on view at the Jewish Museum, New York, through September 16th.