Call It By Its Name

The right is scapegoating the left for its own deadly antisemitism. 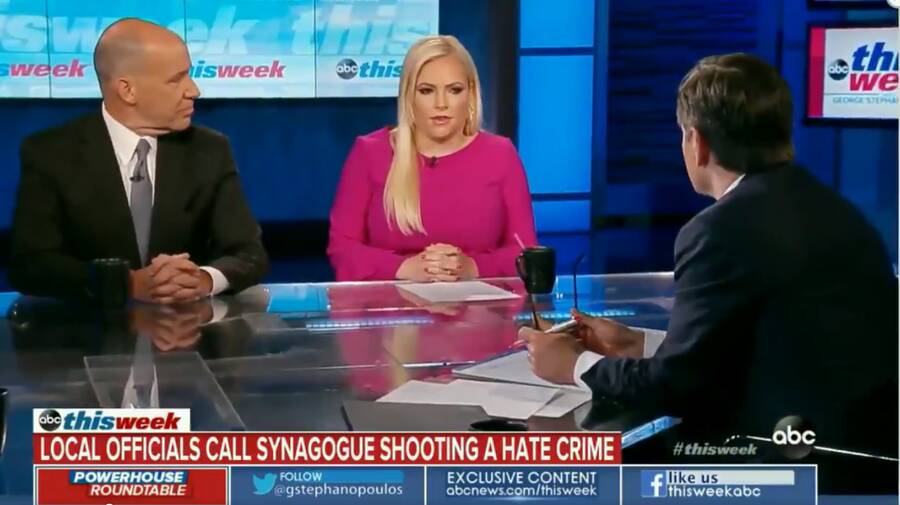 WE HAVE AT LAST reached the point where overt antisemitism in the US feels routine. For years now, conservatives have dog-whistled about, for instance, Jewish billionaire George Soros’ Elder of Zion-like control over the Democratic Party. Eventually, this gave way to something even darker. Donald Trump’s candidacy heralded the reemergence of straight-up Jew-hatred, bringing social media-fueled white nationalism into the mainstream. Inevitably, the antisemitic fervor he stoked had lethal consequences: this past October, a white supremacist massacred 11 Jews at the Tree of Life synagogue in Pittsburgh. And this past Saturday, at a Chabad center in Poway, California, just outside San Diego, a white supremacist directly inspired by the Pittsburgh shooter opened fire and killed a woman, Lori Gilbert Kaye, who reportedly jumped in front of her rabbi, taking a bullet on his behalf. Yisroel Goldstein, the rabbi whose life Gilbert Kaye saved, lamented in a New York Times op-ed on Monday that “today should have been my funeral.”

This steady escalation of American antisemitism has, at every turn, been accompanied by conservative and centrist insistence on denying or downplaying its source: white supremacy. After Saturday’s shooting, Mark Dubowitz, the head of the Foundation for Defense of Democracies, an influential right-wing policy shop, immediately said that the problem is both sides: “Some on the ideological left deny the anti-Semites on their side. Some on the ideological right deny the anti-Semites on their side.” The New York Times’ Bari Weiss offered a similar equivocation, tweeting “The past few days provide a useful case study. Thursday: an anti-Zionist cartoon is published in the Times. Saturday: a white nationalist guns down Jews in synagogue. Sunday: Javad Zarif appears on Fox. The three strands of modern anti-Semitism: far-left, far-right and Islamist.” Weiss’s friend Meghan McCain, who will apparently ride the coattails of her father for the rest of our lifetimes, went on ABC to blame Rep. Ilhan Omar for Saturday’s atrocity. Deborah Lipstadt, the Jewish historian, proclaimed that “Antisemitism does not come from one direction: it’s on the right and the left.”

What a sick joke. To give equal weight to the foreign minister of Iran appearing on cable news and to white supremacists repeatedly shooting up synagogues is a vacuous denial of the reality. White supremacists emboldened by rising far-right sentiment echoed from the White House have embarked on an anarchic campaign of violence against a wide array of minorities, including Muslims, Sikhs, and African-American Christians, in addition to Jews. The atomized and diffuse nature of this violence makes it difficult to contain, resembling the “jihadist threat” of groups like ISIS that people like Dubowitz, Weiss, and McCain pride themselves on recognizing.

These pundits, who all peddle Islamophobia and softer forms of traditional right-wing bigotry, will of course never adequately connect the dots between attacks on synagogues, mosques, and black churches. They would rather argue that people like Omar represent one strain of antisemitism, and the far right another, urgently denouncing the former whenever the latter presents itself.

But the truth sits in plain sight. A manifesto attributed to the San Diego shooter cites inspiration from the massacres at the Tree of Life synagogue and the Al Noor Mosque in Christchurch, New Zealand; it also takes credit for attempting to burn down a mosque in nearby Escondido. The perpetrators of all the attacks above are white men, who have explicitly tied their actions to their far-right, white supremacist beliefs.

Denying white supremacy as the basis for antisemitism today, and instead insisting that we must condemn both sides, is a moral failure. The suspect arrested earlier this month for burning down three black churches in Louisiana was charged with committing hate crimes, and was described by a fire marshal as being a fan of neo-Nazi Scandinavian heavy metal. Last year, members of the neo-Nazi group Atomwaffen were charged with five killings across three different states. One of the victims, Blaze Bernstein, was an openly gay and Jewish classmate of one of the suspects, who was killed while visiting his family in Orange County, California over winter break.

Though some argue that the rise of antisemitism is some mystical force, transcending right versus left and awakened by Trump-era political polarization, we cannot indulge such obfuscations. Only one side has a body count to answer for.