Once a wickedly clever saga about a family of dissolute LA Jews, Transparent loved itself to death. 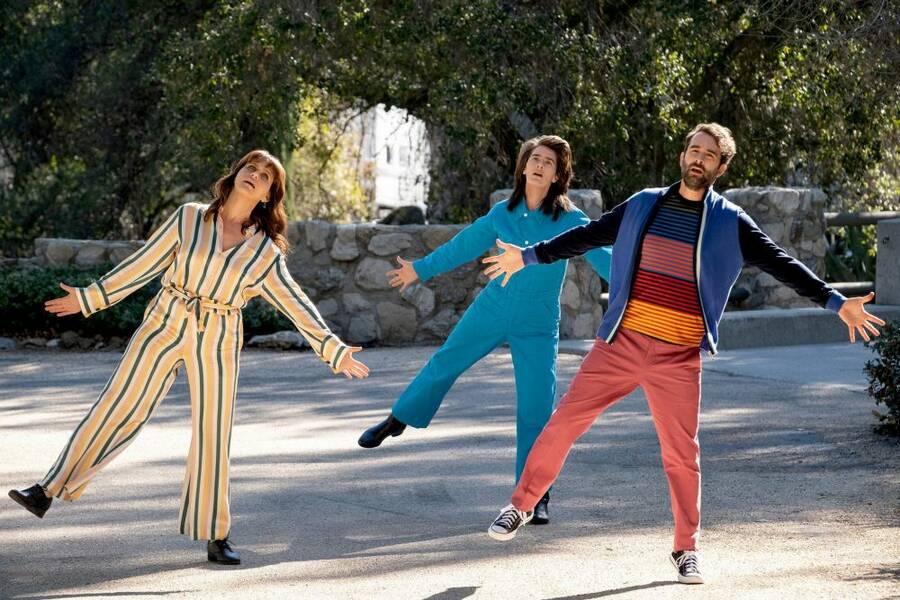 TRANSPARENT should have been a good satire.

The Amazon series, which premiered in 2014 and concluded with a feature-length “Musicale Finale” this fall, had a keen eye for the failings of its wealthy, listless Jewish characters. It was at its cutting best as members of the Pfefferman family, the dysfunctional clan at the show’s center, picked up projects like children’s toys: graduate programs, romantic relationships, sexual orientations, careers, and, especially, a waxing and waning interest in Judaism. The Pfeffermans won all of these opportunities for personal growth at great interpersonal cost, and jettisoned them as soon as they became the least bit difficult.

In the end, unfortunately, Transparent became as smug and myopic as its characters. The show had managed, for much of its run, to live in the gap it created between its narcissistic characters and its own moral perspective. But in its final seasons, that gap collapsed. Determined to be read as politically important both onscreen and behind the scenes, it increasingly disappointed on both counts.

Transparent’s finale—a nearly two-hour episode that made up the entirety of the show’s fifth season—opens with the offscreen death of its central character Maura Pfefferman, a retired college professor who came out to her family as a trans woman at the beginning of the show. The remainder of the finale focuses on the surviving Pfeffermans’ responses to their loss. One of Maura’s three adult children impulsively decides to become a rabbi, while Maura’s ex-wife Shelly (the always-delightful Judith Light) attempts to write a musical about the family. The episode ties neat, awkward bows onto the arcs of characters who had, for much of the series, been portrayed as compelling messes.

Transparent faced the difficult task of concluding the series in the wake of multiple sexual harassment allegations against Jeffrey Tambor, the cisgender actor who played Maura. The accusations, which came from two trans women working on the show, underscored the criticism the show’s creator Jill Soloway had received for casting a cis actor in the role in the first place. Soloway has insisted that the show could celebrate the character of Maura while distancing itself from the man who played her—but even if we take Soloway (who uses they/them pronouns) at their word, that protectiveness led them to demand that one of Tambor’s accusers remain silent. Transparent, a show that thrived in the smaller moments of its characters’ lives, had the opportunity to attempt a conversation as uncomfortable as any other at the Pfefferman house. Instead, the finale gave us “Joyocaust,” a musical number that takes the provocative diasporic idea of joy in the wake of unspeakable tragedy, and reduces it to a mischievous, sybaritic gag. (The song includes the lyric, “Hell yes, we crossed the line.”)

In some respects, the formal choice to structure the finale as a musical makes sense. Transparent already had a lot in common with the loud, corny, bombastic—and frequently Jewish—genre of musical theater. The musical numbers in the finale sometimes allow for a heightened, metaphorical expression of the characters’ feelings, a mode that often defines Transparent at its best. In particular, the song “Run From Your Father’s House” allows Gaby Hoffman’s character Ari—the Pfefferman child formerly known as Ali, who has recently come out as non-binary—to grapple with how they will live up to and move past Maura’s legacy in their own life as a trans Jew. (Naturally, the song quotes “L’chi Lach,” a guitar-strumming hymn by the lesbian Jewish folksinger Debbie Freidman beloved at liberal American synagogues.) Such moments, though, are few and far between, overshadowed by numbers like “Your Boundary Is My Trigger,” in which the episode seeks to use self-parody to absolve itself of the responsibility for nuance or texture. The show’s themes—generational trauma, American Jewish identity—deserve more thoughtful treatment.

It’s too bad, because Transparent, in its often-excellent first two seasons, effectively depicted all kinds of nuance, especially regarding the Jewishness of its characters. The show prodded at the minor inanities of the diasporic experience, moments that are rarely depicted even in stereotypically Jewish pop culture: the antsy energy of the Pfeffermans’ post-Yom Kippur break fast; their halting, half-remembered Hebrew during Shabbat dinner; the fact that they are, until the end, always a breath away from bringing up the Holocaust.

Transparent, however, did not want to be a Jewish show—or, at least, it did not want to be just a Jewish show. Soloway has often described the show itself as “trans”—apparently meaning that it bridges “masculine” and “feminine” creative energies—and the rave reviews that accompanied Transparent’s premiere positioned it as a work capable of speaking not just to Jewish life but to queer, feminist, and, above all, trans and gender-nonconforming life. When Soloway won an Emmy for directing in 2016, their acceptance speech described Transparent as “a revolution,” and concluded by calling for the toppling of the patriarchy.

Now those sentiments feel quaint at best. Was the show simply influential enough to write itself out of relevance? It would be absurd to credit Transparent alone with the current mainstream visibility of trans people, but it certainly did its part. It’s possible that, as a result, Transparent “broke so much ground that it revealed the elements of its own foundation that were rotten,” as the critic Emily VanDerWerff put it. But it wasn’t just that Transparent remained a static pop culture artifact, lapped by the passage of time and changing of norms. As it went on, Transparent began to take itself more seriously as a piece of political art. The show that often succeeded in smaller moments—and that once gently mocked itself by casting Soloway as a pompous gender studies professor—increasingly attempted to go big, broad, and didactic. In a third-season episode, for instance, Pfefferman son Josh briefly considers pursuing a romantic relationship with Shea, a trans woman played by Trace Lysette. When she tells him she’s not interested in being his one-off adventure, it’s in language so clunkily pedagogical that the speech seems directed less at Josh than at an imagined audience seeking validation as trans allies. (There is thus some irony in the fact that later, when Lysette accused Tambor of harassment, Soloway initially asked her to keep quiet.)

By its fourth season, Transparent was emboldened enough to send the Pfeffermans on a trip to Israel and Palestine. It’s an ambitious plot arc—Maura and Ari go to Israel for an academic conference, only to discover that Maura’s presumed-dead father has built a successful air conditioning business and raised an entire second family in the coastal town of Caesarea—and it’s genuinely striking to watch Ari navigate a West Bank checkpoint on a major American TV show. But the storyline flounders in its abject desire for “compromise”; when characters argue about the occupation, they inevitably throw up their hands and declare that things are “complicated.” This may have been an intentional choice—the Pfeffermans’ flaky ambivalence shouldn’t necessarily be seen as representing the perspective of the show—but it effectively foregrounds its lead characters’ narcissism at the very moment it could have seized a rare opportunity to give Palestinians a voice on television. (As the writer Lili Loofburouw puts it, narcissism “is the show’s politics.”) In the series finale, even Ari, the Pfefferman who initially takes the strongest moral stance against the occupation, breathlessly attributes their religious awakening to “Jerusalem Syndrome,” with no mention of the Palestinians they had ostensibly connected with the season before. Once again, a version of this dynamic played out in the show’s production as well: After pushback from BDS advocates like the writer Sarah Schulman, Soloway agreed to film the majority of the scenes set in Israel and Palestine in Los Angeles, but still went to Israel to shoot B-roll.

Rather than contend with its warts, the Transparent finale is a sendoff to the idea of the show, and the idea of its characters. With the exception of Shelly, whose overbearing personality thrives in the open space of a musical, the children are left to hit single beats of uncharacteristic, fantastical stability. The show spends its final, cringey moments in the throes of “Joyocaust,” insisting that its characters should “survive and put on a show” (for whom?) in order to expunge the pain of the Holocaust. (“Take the concentration out of camps / Concentrating on some song and dance.”). Don’t worry, be happy, and definitely don’t think about the way your actions affect those around you.

Transparent often depicted people trying to change but not quite knowing how. In its most transcendent moments, the show insisted that there was something more, that accumulated individual moments of transformation and self-knowledge could lead the Pfeffermans—and perhaps the viewer—to become better. No longer. Everyone is stuck exactly the way they were.

Eric Thurm is a writer and event producer in Brooklyn, New York.

Essay
Just Playing Along
What an antisemitic, Nazi-era board game has to teach us about the nature of complicity.
Eric Thurm
Sign up for our email newsletter, featuring exclusive original content