Jewish Currents is proud to release Black Ox Orkestar’s first recording in more than a decade.

This article appears in our Winter Gift 21/22 issue.

Psalm 107 offers a vision of redemption and rootedness intertwined. The psalmist sings of God collecting his people “from east and west,” showing them “a direct way to reach a moshav”—a “settled place.” It‘s an eternal human longing, this desire to arrive at a true resting place: a site of safety and security, free of the fear that soon we‘ll once again have to pack up frantically to chase the light while the shadows close in.

But ours is not a time of resting in any one place for very long. This is the age of mass exile, driven by the wrath of humans and of nature. So where will we go? Where can we go? And how shall we get there?

Black Ox Orkestar takes up these questions in the musical language of the Jewish diaspora. Thierry Amar, Scott Gilmore, Gabriel Levine, and Jessica Moss formed the group in Montreal in 2000 to explore the sounds of the Jewish past, drawing on their experiences as North American Jews whose lineages range from Eastern Europe to North Africa. The result is a vivid, almost overwhelming sound that transports the listener not into the past, but to an alternate present, one where the wails and thrums of Jewish music around the world—­especially the Ashkenazi genre known as klezmer—were never stifled. The band played locally, then nationally, then internationally, and released two albums on Constellation Records, Ver Tanzt? (Who’s Dancing?) and Nisht Azoy (Not This Way). Then, they vanished.

Now they have reunited, and Jewish Currents is proud to release their first recording in more than a decade. “Mizrakh mi ma’arav” (“East from West”) builds on a line from Psalm 103 (“As far as east is from west has he removed us from our transgressions”) to tell a story that will only become more universal in the days to come. By interspersing the predominately Yiddish lyrics with words in Arabic, English, Hebrew, and German, the band evokes refugee flows of past, present, and future. Lamentation, rage, and hope swirl together as the song reminds us that “settlement” is a dangerous illusion. The destination cannot be where meaning lies, for we may never reach it.

Onward we walk, west to east, and further east, and even further, until east becomes west. If we just get past the horizon, we can stop for the night. We‘ll sing. We‘ll sleep. Then, tomorrow, further still. 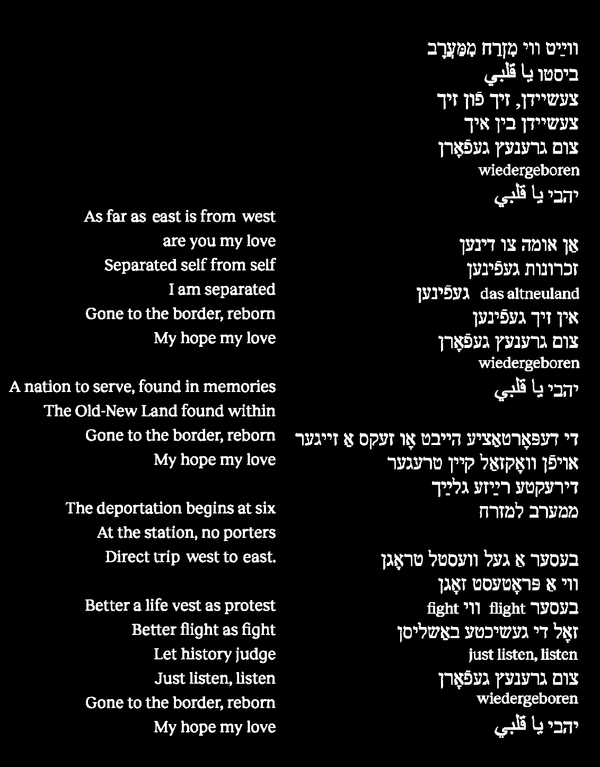 Black Ox Orkestar began in the summer of 2000, the project of four Montreal musicians exploring their common Jewish heritage for sounds that could speak to them today. Its members are Thierry Amar, Scott Gilmore, Gabriel Levine, and Jessica Moss.