An Optimist Signs Off 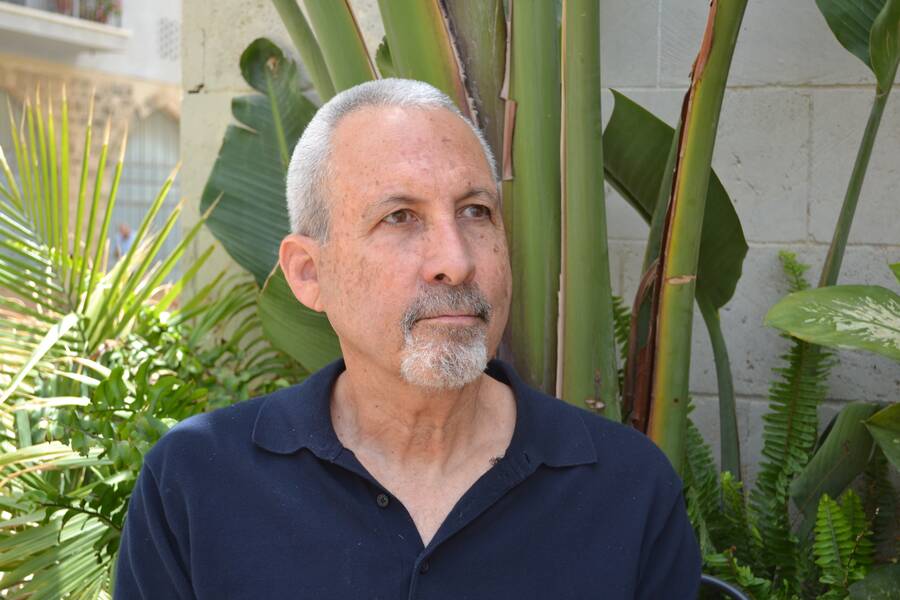 LAST MONTH, two weeks after it became clear that Benjamin Netanyahu would be serving a fifth term as Israel’s prime minister, one of Israel’s most beloved English-language, left-wing writers announced his retirement. The timing was coincidental, but for many of Bradley Burston’s readers, it likely stung. Burston’s Haaretz column on Israeli politics and life, “A Special Place in Hell,” was a regular destination for people who care about Israel but are deeply concerned about its political future. With elegant and sometimes searing prose, Burston laid bare the deepest moral questions facing the country.

Raised in Los Angeles and educated at Berkeley, Burston moved to Israel in 1976 at age 24 as part of a cohort of leftist American Jews who aimed to shape the Jewish future. He helped establish Kibbutz Gezer, between Jerusalem and Tel Aviv, which he now calls an “alternative Woodstock near Ramle.” At the time that he moved to Israel, Burston believed that the country’s fate was not yet written—it seemed plausible that Israel would retreat from its occupation of the West Bank. Now Burston uses the word “apartheid” to describe his adopted country’s policies toward Palestinians. In his final act of reportage as a Haaretz columnist, he interviewed the Messianist settler leader Daniella Weiss, who made a convincing case that her vision of Israel has won out over his.

Nonetheless, Burston was surprisingly upbeat during our interview at a cafe in Jaffa. He arrived with a blue binder stuffed with decades-old issues of The Jewish Radical. Before ordering a cookie and a cappuccino, he pulled out a copy with his photo on the cover and his byline inside. He wrote the article—of which he says he is not proud—shortly before he moved to Israel. In it, he considered whether older kibbutzim have “sold out” by becoming havens for wealthy Israelis. That’s why he was moving to a new kibbutz, he explained, to be part of an uncorrupted founding generation. Toward the end of the article, he wrote, a bit self-importantly: “I am looking forward to a life on which I can look back with fondness and pride.”

Looking back—and forward—was the focus of our conversation. This interview has been edited for clarity, length, and style.

Naomi Zeveloff: Why are you retiring your column, and why now?

Bradley Burston: There were other things that I wanted to do. I have written literally thousands of columns. If that hasn’t changed things by now, chances are it is not going to. I still loved doing it, but I didn’t want to just keep going indefinitely until I didn’t. I wanted to stop while I really love it. It was almost like a good omen that Netanyahu brought down the government [by calling for elections]. I would have one more election [to cover].

NZ: You are known for your empathetic writing, which stands in contrast to some of the other fiery voices in Haaretz. Why empathy versus anger?

BB: It is true of many Haaretz writers that you get the fire but you don’t get the warmth. But the idea I am really trying to drive home is that there is something here that is enormously strong and positive usually having to do with families, which has nothing to do with the government or ideology that people spend all their time on. Beyond it all, there is supposed to be this family of the Jewish people, after a tremendous catastrophe almost wiped it out.

NZ: You have said that you initially planned to stay in Israel just a year. Forty-three years later you’re still in Israel. Why did you stay, given your feelings about how the country has changed?

BB: Lately, it has become almost a daily occurrence to [ask], “What are we doing here?” We wake up to the news and it gets a quantum leap worse by the day. The thing is there are still wonderful people here and still wonderful things going on. They don’t cancel out the other stuff; it is almost as though there is no connection between the good stuff and the bad stuff.

NZ: Have you ever thought about returning to America?

BB: Until Trump, America served as a kind of virtual life preserver to the Americans that were here and had dual citizenship. Watching how fast America can turn into the worst of Israel, with the speed and the overarching scope of all of the things that Trump is ruining day by day, it really changes your perspective. It is no longer a life preserver, it is a version of the same thing. It may be reversible but I am yet to be convinced, especially because some of the same elements that are so weak here in the left are showing themselves in the left in America: the divisiveness and the self-criticism, which becomes paralysis.

NZ: You are emblematic of the generation of American Jews who believed moving to Israel was an expression of liberal values. Today many left-leaning American Jews would likely see the same act as a negation of their values. Looking back, does this change how you think about your decision to come to Israel?

BB: [Even when I moved to Israel] progressives said, “What are you doing? Why are you reinforcing nationalism as opposed to some kind of universalism?” And I think [that sentiment] is probably stronger now because Israel’s government has become so objectively awful. But the fact is that there were plenty of distasteful elements of the Israeli government when we came. Golda Meir was revered by some people but she was a very negative person, denying the identity of the Palestinians and rejecting any possible overtures of peace from the Egyptians, something that probably cost thousands of Israeli lives in 1973. The same problem still exists, but there have also always been people here who have been fighting for equality and for the welfare of the people who live here.

NZ: Do you have a message for these young American Jews who want nothing to do with Israel?

BB: My message, and this has nothing to do with Birthright, is: Come here and experience this place, which is nothing like you think it is, whatever you think it is. Before I came here, I had no idea what goes on here and I barely do now after all this time. I can say there is something here, something really important and compelling that the government, despite all its efforts to ruin, hasn’t ruined. It is something beyond ideology. I can’t explain what it is that gets under your skin in this place. It is the Holy Land for a reason and not only for the Jews. Maybe it is radon. It takes people and it grabs them and it changes them, very often in good ways, and all I can say is: Don’t make a decision about Israel. Just come to visit as if it was [any other] place. When you are here, try to experience as much as possible. Talk to Palestinians, talk to Israelis, be open to both sides. You will come back changed.

I totally support IfNotNow in their efforts to move Birthright and Hillel to make education about occupation an integral part of their Israel programs. I would say that at least as crucial are efforts to do outreach to young Jews who have already been to Israel on these programs and feel they want to know more. All of this is tough, and for the activists who do the work, it’s likely to feel thankless or Sisyphean. But it could have enormous importance going forward, both for the North American Jewish community, for the future of Israel, and, truly, for the future of Judaism—the essence and culture and morality of what being Jewish is going to mean for generations to come.

NZ: Do you identify as a Zionist?

NZ: Did you previously?

BB: I don’t know. I don’t think I ever thought very much of the government here—I always identified with Israel and not with its government. People should stop using the word “Zionist” altogether unless they are talking about supporting settlements. That is what [Zionism] is now.

I think the debate about whether someone is a Zionist or anti-Zionist clouds the real issue, because the real issue is: Do you think there should be a state of Israel or do you think that the state of Israel is illegitimate and should cease to exist? That is the real bedrock debate. I have no issue with anyone that says there shouldn’t be nations. That seems completely legitimate to me. I have no issues with someone who says that Israel is a terrible government and a terrible country. That is completely legitimate. Not to be cliché, but if someone says Israel should cease to exist and cannot find one other country that should also cease to exist then there is something wrong.

NZ: What’s your balance of optimism to despair right now?

NZ: What else powers your optimism?

BB: I know for a fact that there is a critical mass of people here who actually do want to see a liberal democracy and who don’t want to see these extremist minorities dictate terms—not Kahanists, not ultra-Orthodox people, not any of the extremists who have a kind of dictatorial power because of the political system. But I think that it probably will take 20, 30, 40 years before a generation arises which is able to take back the country, before the system dies of its own weight and the revolutions like the settlements die of old age. [When that happens] it will make room for the idea that Arabs and Jews are just human beings trying to live with one another, that the culture of Palestinians is rich and worth preserving and the culture of Israelis is rich and worth preserving.

NZ: You talked about this rosy view of the future on a recent Haaretz podcast. You said you don’t care that you won’t be around to see such it. Why?

BB: It doesn’t bother me in the slightest. Even if you are as leftist as the day is long, to live here successfully you have to be some kind of Messianist. It doesn’t bother me if the Messiah comes after me, if it comes in the form of a liberal democracy, it is fine. If my grandchild gets to see it, somewhere in heaven I will be happy as a clam.

Naomi Zeveloff is a reporter based in Israel and the Palestinian territories, and is the Forward’s former Middle East correspondent.