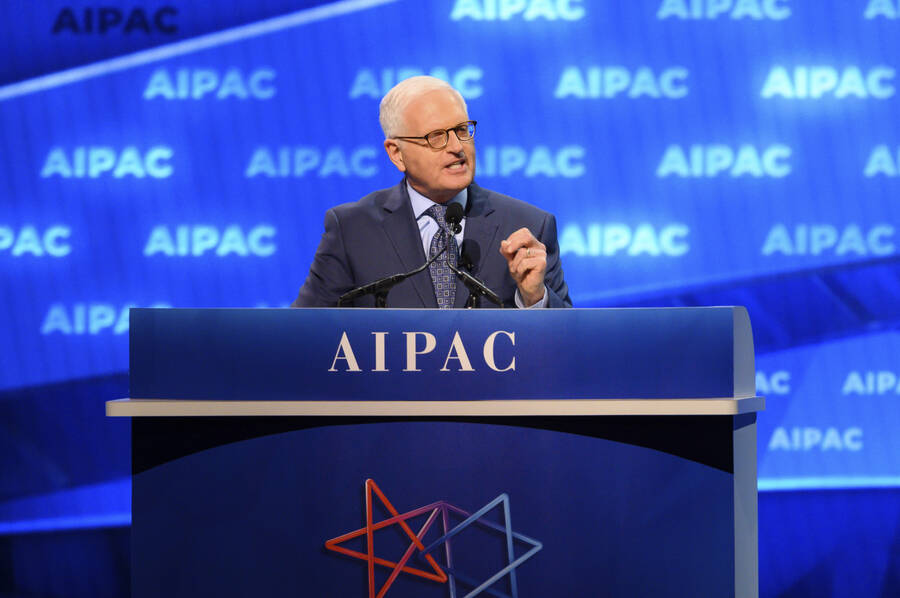 WHEN NIDA ALLAM launched her bid for Congress last November, she had reason to be confident. Allam, a commissioner of Durham County, North Carolina, and the first Muslim woman to hold office in the state, raised $700,000 in just the first six months of her campaign. The Working Families Party endorsed her in January. In April, Sens. Bernie Sanders and Elizabeth Warren, both popular among progressives in the district, endorsed her.

But then AIPAC, the most influential Israel lobby group in Washington, intervened. Allam had called for an end to “Israel’s violent, illegal occupation,” a stance anathema to AIPAC’s interests. From March to May, the United Democracy Project, AIPAC’s Super PAC, spent over $2 million on mailers and advertisements in support of Valerie Foushee, Allam’s main opponent in the Democratic primary. Such groups are allowed to spend unlimited sums of money for or against a candidate but are barred from coordinating with candidates themselves. AIPAC’s political action committee (PAC) bundled another $460,000 from individual contributors for Foushee’s campaign, constituting about 39% of Foushee’s total fundraising. Foushee also benefited from about $1 million in spending by Protect Our Future, a Super PAC bankrolled by Sam Bankman-Fried—the 30-year-old crypto tycoon and philanthropist whose multibillion-dollar fortune vaporized last week amid a still-unfolding scandal—and another $290,000 from the AIPAC-tied group Democratic Majority for Israel, among other groups. Allam, by contrast, was boosted by just $240,000 in total spending by progressive groups, and raised about $1.2 million in total, according to her campaign.

On May 17th, Foushee beat Allam by a nine-point margin. Maya Handa, Allam’s campaign manager, said the outside spending and bundling helped Foushee a lot. “The additional $4 million of outside spending that our opponent received probably was a difference maker,” said Handa.

In the wake of last week’s midterms, the impact of AIPAC’s massive campaign spending has come into full view. By dumping at least $28.5 million into the elections, AIPAC sought to keep candidates critical of Israel’s human rights abuses from gaining greater power in Congress, to replace retiring progressive incumbents with allies, and to make progressives think twice about criticizing Israeli apartheid at all.

Prior to last year, AIPAC had encouraged supporters to donate to PACs, but did not have direct control over those PACs’ operations. Then, in December 2021, AIPAC launched its own PAC, as well as a Super PAC. AIPAC’s PAC, which can give up to $5,000 to a candidate—though it can collect and donate far more by “bundling” donations on behalf of individual donors—contributed $2.5 million to the over 300 candidates it endorsed. The United Democracy Project (UDP), AIPAC’s Super PAC, spent more than $26 million either to support its preferred candidates or hinder progressive ones the group opposed. In an interview with The Washington Post in August, Howard Kohr, the CEO of AIPAC, said the group had been monitoring left-leaning Democrats, describing them as “anti-Israel” politicians. “We wanted to defend our friends, and to send a message to detractors that there’s a group of individuals that will oppose them,” Kohr said. AIPAC helped elect a number of new lawmakers to Congress that the group considers allies. In some cases, these new members are replacing retiring members who were critics of Israel’s occupation. AIPAC also rewarded incumbents who already worked with the group. But there were races where it fell short of its goals to defeat progressives. AIPAC’s Super PAC spent about $3 million in an attempt to beat Summer Lee, a Pittsburgh-area state lawmaker who was endorsed by AIPAC rival J Street, which opposes Israel’s military occupation. While AIPAC’s spending likely helped close the gap between Lee and her main opponent, Lee still won her primary, albeit by less than one point. She will have additional freshmen allies with similar views in the 2023 Congressional session: progressives who won races where AIPAC did not spend money, including J Street endorsees such as Becca Balint and Delia Ramirez.

Notably, AIPAC spent little against the most prominent progressive critics of Israel, including incumbents such as Missouri’s Cori Bush, Michigan’s Rashida Tlaib, or New York’s Alexandria Ocasio-Cortez. “AIPAC is trying to pick candidates where they think they can win. There are other candidates they could have chosen to go after that are more notably in support of Palestine, but AIPAC did not go after Rashida and Cori,” said Beth Miller, Jewish Voice for Peace Action’s political director. AIPAC’s Super PAC donated $350,000 to a separate group that ran ads on behalf of Don Samuels, who lost his bid to unseat Minnesota’s Ilhan Omar, another prominent voice for Palestinian human rights in Congress, by two percentage points. And progressive critics of AIPAC say the spending against progressive Democrats, and their fundraising on behalf of Republican candidates, is damaging AIPAC’s claim to be a bipartisan organization. It also fuels negative views of the group among Democratic voters, they say.

Marshall Wittmann, a spokesperson for AIPAC, told Jewish Currents in an email that 95% of candidates AIPAC backed won their races. In many of those races, AIPAC’s spending was not decisive; the vast majority of the candidates AIPAC supported through its PAC were incumbents who typically have an easier time being re-elected. “We are proud to lead the fight to strengthen bipartisan support for the US-Israel relationship—and that is appreciated by both parties,” Wittmann said.

But while many general election results are predictable, it is in party primaries where AIPAC’s Super PAC spending registered the greatest impact. Fewer voters participate in primaries compared to general elections, which means big donations have a better chance of swinging outcomes. UDP intervened in ten separate Democratic primaries to back centrist candidates supportive of Israel against progressives—mostly by spending millions on advertisements—and helped seven of them win. (An eighth candidate backed by UDP went on to win in the general election.) In four of those races, UDP’s spending helped replace an outgoing lawmaker who had criticized Israel in some fashion with a candidate backed by AIPAC. Foushee is taking over from the retiring David Price, a close ally of J Street. With the help of over $4 million in UDP spending, Rep. Haley Stevens of Michigan defeated Andy Levin, the author of a bill that would prevent US military aid from going toward demolitions of Palestinian homes or evictions of Palestinians. UDP spent another $2 million to boost Don Davis in North Carolina to replace the retiring GK Butterfield who was further to the left on Israel policy than AIPAC.

In the race for the newly-created 10th Congressional District in New York, UDP gave $350,000 to another Super PAC, New York Progressive, Inc. The money went toward attacking progressive candidate Yuh-Line Niou, who was defeated by the more moderate Daniel Goldman, a Levi-Strauss heir who spent about $4 million of his own money on his race.

In addition, UDP spent about $590,000 to back Kevin Mullin, who went up against progressive Democrat David Canepa; because of California’s unique rules, the spending came during the general election season, after Mullin and Canepa advanced as the top two vote-getters in the Democratic primary. Mullin will replace Jackie Speier, another J Street ally.

“[AIPAC helped] change the composition of the Democratic caucus to make sure there are more people in there who seem likely—based on how they were elected—to have some loyalties to AIPAC,” said Lara Friedman, president of the Foundation for Middle East Peace.

Friedman added that the biggest impact of AIPAC’s spending will be in producing a “chilling effect” on members of Congress. “What this election cycle is saying is, ‘hey, heads up, every time a letter [critical of Israel] comes across your desk, even if you agree with it, you better think about whether signing this is going to mean that someone’s going to pour money into your primary,” she said.

But Shahid also believes AIPAC’s spending will backfire. Democrats, he said, dislike AIPAC’s support of GOP candidates. He pointed to UDP’s spending around $1 million to defeat the Justice Democrats-endorsed Summer Lee, who nonetheless won the general election against Republican Mike Doyle. (The $1 million in the general election came on top of the nearly $3 million UDP spent to try and defeat Lee in the August primary.) That spending—combined with AIPAC’s previous endorsements of 109 Republicans who voted against certifying the 2020 election results—fueled progressive criticism of AIPAC as a right-wing lobby. “AIPAC got overly cocky with the Summer Lee race in a way that may have ruined what little reputation they have among center-left Democrats,” Shahid said. “It’s just a matter of time until AIPAC fully goes the route of the NRA, and becomes an entirely partisan right-wing organization.”

AIPAC spokesman Wittmann disagrees. He told Jewish Currents that AIPAC “supported 148 Democratic candidates, the Democratic leadership and almost half of the Congressional Progressive Caucus—demonstrating that it is entirely consistent with progressive values to stand with the Jewish state.” But there’s some evidence of Democratic alienation from AIPAC: In a poll conducted on election day, J Street found that 72% of American Jews—and 89% of Jews who voted for Democrats—disagreed with AIPAC’s endorsement of Republicans who voted against certifying the 2020 election.

“Combine how much they’ve alienated American Jews and Democrats with their support for far-right Republicans and their aggressive spending against progressive Democrats, and their standing in the Democratic Party is significantly lower than it was before the cycle started,” said Logan Bayroff, J Street’s vice president of communications. “They had some good wins. They splashed some money around. They made a big impression. But they’ve also angered people who for a long time were willing to look the other way about their activities.”

Newsletter
What the FBI’s Investigation of Shireen Abu Akleh’s Killing Won’t Resolve
The probe is the first by a US agency into the death of the Palestinian American journalist.
Alex Kane
Newsletter
Four Takeaways From the 2022 Midterms
What do election results mean for Israel/Palestine policy, youth politics, policing, and reproductive justice?
Alex Kane, Matthew Miles Goodrich, Akela Lacy, and Amy Littlefield
Sign up for our email newsletter, featuring exclusive original content
Want original reporting and analysis on Israel/Palestine?
Sign up for the Tuesday News Bulletin.