To build solidarity in this moment, white Jews should resist the impulse to highlight similarities between histories of antisemitism and anti-Blackness. 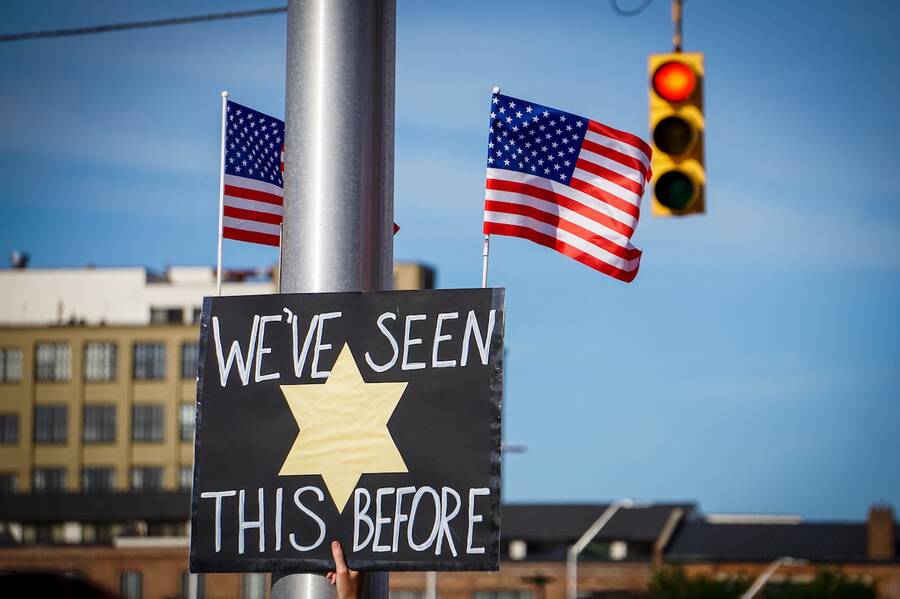 THE CURRENT NATIONWIDE UPRISING—triggered by the state-sanctioned murders of Breonna Taylor and George Floyd, accelerated by the leadership of the Black Lives Matter movement, and compounded by racial and economic crises—requires white people, including white Jews, to think carefully and strategically about their role in dismantling white supremacy. The task at hand for the Jewish community is less about cleansing individual white Jews and their communal institutions of racism than about organizing them to join the Black Lives Matter movement in attacking the white supremacist police state.

Mainstream American Jewish institutions have overwhelmingly aligned themselves with law enforcement and often maintain close relationships with city and state governments. In Los Angeles last week, police officers opened fire on peaceful protestors with tear gas and rubber bullets just one mile from the Jewish Federation building. Four days later, Federation CEO and President Jay Sanderson hosted a webinar with Mayor Eric Garcetti, whose continued inflation of the LAPD budget was itself a central cause of the protest. But Sanderson was not airing a meeting with the mayor in order to hold him accountable. Instead, he touted his own relationship with Los Angeles police chief Michael Moore—“a great friend to the Jewish community”—and praised the “positive and very supportive” relationship that Jewish communities in Los Angeles share with law enforcement. This was not atypical. The UJA-Federation of New York, for instance, recently appointed a new executive director of its Community Security Initiative, Mitchell D. Silber—a former Director of Intelligence Analysis for the NYPD and co-founder of the intelligence and security consulting company Guardian Group with former New York City Police Commissioner Raymond Kelley. On Monday, it was announced that the Anti-Defamation League was making former FBI official Gregory Ehrie its new vice president for law enforcement and analysis.

It is important to interrogate the reasons that institutional Jewish organizations turn toward law enforcement and the critical failure of imagination that such a turn reflects. But it is most important right now for white Jews to join the fight: Given their evident proximity to the police state, white Jews are in a position to use their voices and resources to not only withdraw support for it, but also to actively disrupt the preservation of the racist status quo. Young, non-Black Jews are thus facing a vital imperative to confront their white Jewish families and peers about their active implication in—that is, maintenance and reproduction of—white supremacy, raising questions about the most effective strategies for organizing and mobilizing Jews who remain shrouded in white ignorance.

More often than not, when progressive Jews attempt to mobilize their communities into solidarity with other minority groups, the strategy is one of comparison, analogy, and parallel. This tactic has mostly revolved around immigration and Islamophobia in recent years. “‘Never again’ is now,” Rabbi Danya Ruttenberg wrote following Donald Trump’s election in 2016, in response to the silence of many Jewish organizations regarding Trump’s anti-Muslim and anti-immigrant campaign promises. A recent Bend the Arc campaign against “hate and political violence” was titled “We’ve Seen This Before.” The immigrant rights group Never Again Action recently combined both messages on its homepage: “Anne Frank didn’t die in a gas chamber. Anne Frank died because she caught an infectious disease in a concentration camp. We have seen this before. We won’t let it happen again. Never again is now.”

It is only natural that Jews would follow the momentum of this tactic in relation to the current protests against the state’s anti-Black violence, and indeed some Jewish publications and prominent Jewish influencers have begun to make comparisons between this uprising and the ones mobilized by Jews in the Warsaw Ghetto—and even by the Maccabees against the Seleucid empire. If Jews can make a connection to their own suffering, this logic suggests, then they will be willing to enter into solidarity with those suffering under similar forces of oppression today. No doubt, Jewish histories of oppression give us a memory and a language with which we can perceive oppression in the present. The Immigration Act of 1924, for example, which restricted Jewish immigration to the US from Eastern Europe on racial grounds, can help us identify similar racial exclusions today. But a sound strategy right now would move in the opposite direction: White Jews in this moment should resist the impulse to highlight the similarities and instead amplify the differences.

The first comparative strategy assumes that sameness produces empathy, which in turn produces solidarity. A full-scale critique of the politics of empathy, which relies on a sentimental identification with victims in order to arouse political action, is beyond the scope of this piece. But whether or not such politics are problematic, the more pertinent point is that such “victim-bonding” may not actually produce the intended mobilization. In her critique of much second-wave feminist organizing, bell hooks argues that by “bonding as ‘victims’, white women’s liberationists were not required to assume responsibility for confronting the complexity of their own experience . . . Identifying as ‘victims’, they could abdicate responsibility for their role in the maintenance and perpetuation of sexism, racism, and classism.” In other words, regardless of the historical and personal truth of white women’s victimhood, identification as victims prevented them from seeing their role in the oppression of others.

Likewise, activating our white Jewish family members’ and peers’ identification as victims—even if only in historical terms—can, counterintuitively, make it more difficult for them to confront their role in the maintenance and perpetuation of white supremacy. Summoning memories of the Holocaust and other experiences of antisemitism invites Jews to imagine themselves as the victims of racial violence, which can foreclose possibilities for seeing themselves, today, as complicit. We see evidence of this in the way that invoking simplified comparisons between antisemitism and anti-Blackness frequently opens the door to a counterproductive litigation of differences: “But we never rioted,” “But Nazism was so much worse,” and so on. It is precisely the crudeness of these comparisons that leave them vulnerable to such litigation: The historical forms of economic exploitation and exclusion, of state and extrajudicial violence, and of ideological antagonism vary between antisemitism and anti-Blackness as much as, if not more than, they coincide.

The legacies of plantation slavery, systematic rape, convict leasing, and lynch mobs are best understood on their own terms. The current rebellion, a revolutionary refusal of the ongoing criminalization, enforced impoverishment, incarceration, and state-sanctioned murder of Black people, is a product of a long Black liberation struggle, stretching back to the first fugitive slaves who stole themselves—as property—from their white masters in a flight to freedom. None of these histories have simple counterparts in the history of antisemitism. Beginning from a place of difference, rather than sameness, shifts the focus away from Jewish victimhood and suffering and opens a greater window for listening and learning.

In 1970, South African anti-apartheid activist Steve Biko wrote in the South African Student Organization newsletter: “We are concerned with that curious bunch of noncomformists who . . . claim that they too feel the oppression just as acutely as the blacks and therefore should be jointly involved in the black man’s struggle for a place under the sun. In short, these are the people who say that they have black souls wrapped up in white skins.” Biko was responding to the white liberal insistence on a bilateral or multiracial leadership in the fight against apartheid, but his concern seems equally pertinent for white Jewish progressives, leftists, and radicals today who insist that they’ve “seen this before.” Such an insistence betrays an assumption that white Jews or their ancestors have experienced something parallel to anti-Blackness. Consequently, their present position in the camp of the oppressor—as white people—often fades from view.

Jewish communities teach themselves that their suffering is paradigmatic—the benchmark against which other experiences of suffering are compared. To continually invoke the Holocaust or other histories of Jewish suffering as a tool for mobilizing Jewish political action is to leave these comparisons open to never-ending, narcissistic dissection. But when we shift the focus away from Jewish suffering, Jewish victimhood is no longer under debate; a different terrain emerges on which white Jews can begin to consider their active implication in white supremacy. By resisting the impulse to understand anti-Blackness through antisemitism, white Jews can choose to stop abdicating responsibility and recognize their present position of complicity. In this way, we can provoke a more productive mobilization, one capable of collaborating in a serious effort to dismantle the white supremacist police state.

Ben Ratskoff is a writer, teacher, and scholar based in Los Angeles. He is the founder and editor-in-chief of PROTOCOLS.