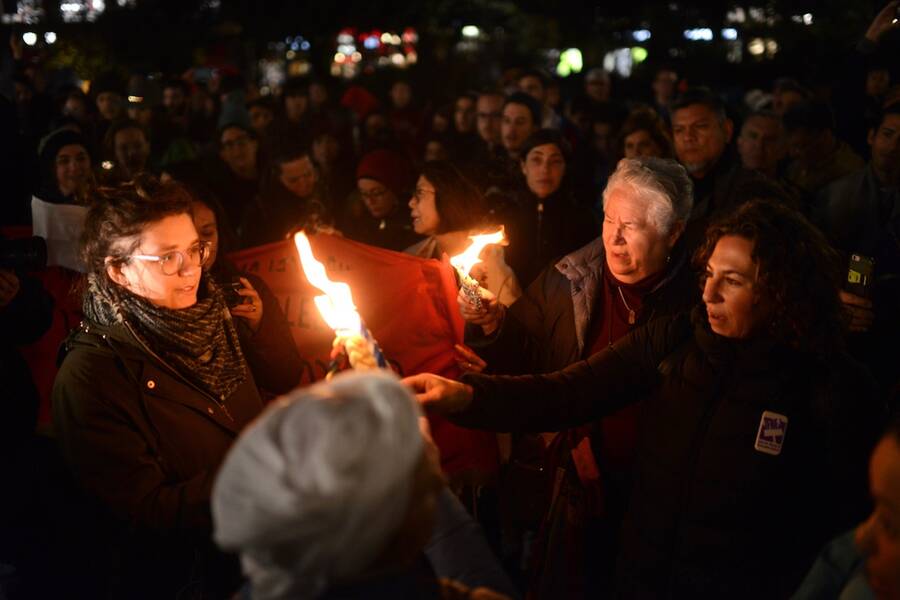 I LEARNED ABOUT the murder of 11 people at the Tree of Life congregation in Pittsburgh shortly after waking up on Saturday morning. The man believed to be behind the shooting, Robert D. Bowers, who was taken into custody after a standoff with police, was transparent about his intentions: in the act of committing the murders, Bowers reportedly yelled, “All Jews must die.” This was all made terrifyingly clear once he was apprehended, within a few hours of when news of the shooting first broke. By midday, liberal activists in New York City, where I live, had already organized a Saturday evening vigil in Union Square, set for seven o’clock.

I arrived at the vigil 20 minutes early, alternately keen and anxious to see how many people would show up. Within an hour, hundreds had arrived. By the time I left at around eight, there were at least a thousand people, faces streaked with tears and rain and twisted by anguish, eyes downcast with the disconsoling realization that the resurgence of public antisemitism over the past few years has now finally matured into that distinct, horrifying American tradition: the mass shooting.

Though the Tree of Life shooting is the most deadly attack on Jews in American history, it is merely the latest chapter in the ongoing story of American white supremacist violence. There was the 2012 murder of six people at a Sikh temple in Milwaukee, then Dylan Roof’s massacre of nine black churchgoers in South Carolina in 2015, followed by the killing of Heather Heyer at the Charlottesville Unite the Right rally last year, with too many attacks to name in between and since. Just this week, a Trump-obsessed man in Florida was arrested for mailing bombs to leading critics of the president, and it was discovered that the man who shot to death a black man and woman in a Kentucky supermarket had attempted to enter a predominantly black church before settling on a Kroger’s.

The roots of this violence go deeper than Trump, though it is undeniable that his candidacy and election catalyzed its rise; you can take the white supremacists at their word on that one. Right-wing institutions like Fox News and the Republican Party itself were constitutive in this regard, particularly with the massacre at Squirrel Hill. For the last couple weeks they have screamed George Soros’ name as they pointed fingers at a so-called refugee “caravan” coming north to the Mexican border, suggesting that the Jewish billionaire was financing and facilitating the en masse entry of Latin American migrants and asylum seekers to the United States. Robert D. Bowers claimed to have been exercised by pretty much the same thing: hours before he stormed the synagogue with an assault rifle and a handgun, Bowers posted online, “HIAS [the Hebrew Immigrant Aid Society] likes to bring invaders in that kill our people. I can’t sit by and watch my people get slaughtered. Screw your optics, I’m going in.”

The Trump administration, Republican officials, and right-wing media apparatchiks, of course, have shamelessly stayed the course. Hours after the shooting, Chris Farrell, of the influential conservative group Judicial Watch, made reference to the “Soros-occupied State Department” on Lou Dobbs’ Fox Business Network show. Though there have many solemn tweets and statements about the need to eradicate hatred, which themselves read like an algorithmic imitation of what a public figure should say (Ivanka Trump: “All good Americans stand with the Jewish people to oppose acts of terror & share the horror, disgust & outrage over the massacre in Pittsburgh. We must unite against hatred & evil. God bless those affected”), there has been nothing resembling contrition. This is no surprise.

HOW DO WE RECONCILE the contradiction at the heart of modern American Jewish life: Jews have seldom had so comfortable and so privileged a place in society, while simultaneously there has emerged the most toxic current of public antisemitism since World War II, when American Nazi sympathizers rallied in Madison Square Garden by the thousands. Upon reflection, it seems almost shocking that it took until 2018 for someone to successfully carry out such an attack on a Jewish place of worship.

Though it may be seductive to think that antisemitism has always been a part of American public life, a feature of antisemitism’s supposedly unique, eternal nature (“history’s oldest hatred,” so the saying goes), this is a misdiagnosis. The German socialist August Bebel famously quipped that “antisemitism is the socialism of fools,” a remark that brings us closer to the truth: antisemitism thrives in unsettled times, when the institutions tasked with keeping society from falling apart are themselves coming undone. We are now living in such a time.

In post-New Deal America, Jews ascended to the heights of American society. Alongside other barrier-breaking minorities, Jews became baseball stars, leading academics and politicians, and even won their own unofficial Supreme Court seat. But unlike many other minorities, Jews also won the privileges of whiteness, successfully leaving riotous and desiccated urban cores for the comforts of the suburbs, where they were able to settle, buy homes, and send their children to schools in communities that black Americans could only dream of.

But the flawed liberal social contract that emerged after the New Deal and World War II—weak-tea social democracy that lifted millions of Americans, Jews included, into the middle class and beyond, alongside substantial but insufficient civil rights reforms—is fraying. Overt racism once nominally kept in check by political and business elites has moved from the back- to the foreground, as the failure of the American right wing’s actual political program has become ever more apparent. Added to the mix is social media, corporate-run platforms of discourse whose chief bias is to encourage more time spent on social media, for which it turns out stoking race hatred and bigotry is an extremely effective, if unplanned, engagement tactic. Antisemitism, all the while, has been making its slow reentry into the public sphere.

IT IS OBVIOUSLY no coincidence that antisemitism—both its language and its practice—has reared its head at a time when nativism, racism, and far-right lunacy more generally have come into fashion. At a time when the established order of things is cracking, and “anxiety” about racial and class precarity stoked by the right wing is reaching ever-higher levels, it is natural that crackpot theories about Jewish influence would gain currency, and it was inevitable that the spike in the number of antisemitic hate crimes would translate to an increase in the severity of those crimes. But while there is nothing inevitable about what is required to turn back this rising tide of hate, the vigil at Union Square offered one path forward.

The speakers at the event, which was organized by a coterie of left-wing groups including Jews for Racial and Economic Justice, IfNotNow, and Bend the Arc, laid out a clear vision of the required mutual solidarity that is the only escape from the morass of violence and hatred in which we now find ourselves. “We will advocate for others whom we believe should be here too,” said Sophie Ellman-Golan, an organizer from Jews for Racial and Economic Justice. “Their theory is conquer by division, and we will not let that happen,” added Murad Awawdeh, of the New York Immigration Coalition, noting that a number of Muslim individuals were on hand providing security for the event, a favor that the Jewish vigil organizers pledged to return for iftar next spring.

We may only have the contours, and not yet the precise plans, for how to build successful coalitions to fight the overwhelming reactionary currents coursing through civil society. But we need to start with the commitment to solidarity demonstrated at the vigil. “They came for the Muslims, they came for the immigrants, they came for our African-American brothers and sisters, and this week they will be coming for migrant refugees,” Awawdeh continued. “I stand here today, in solidarity and in love, with you all.”