A Butterfly in Gaza

“It was just a week ago that I saw Gazan children practicing childhood the way they are supposed to, but that must have been deemed too good for them.” 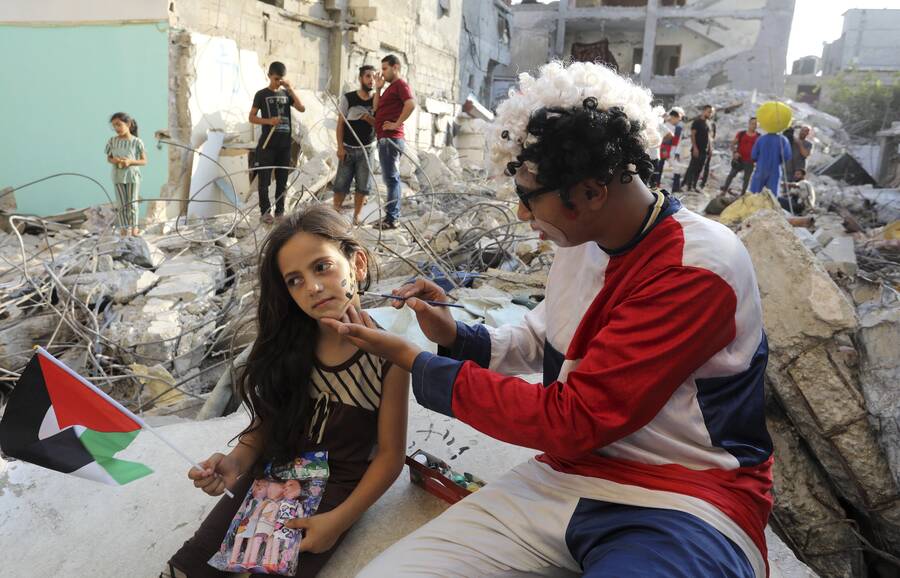 A clown paints a child’s face amidst rubble from the Israeli assault in Rafah, in the southern Gaza Strip, on August 9th, 2022.

“Kholoud,” my mom whispered. I had been up all night; a few minutes of sleep was all I thought I needed to survive. My mother’s whispering was faint, as if she didn’t really want to wake me. Even so, I was instantly snatched from my dreams. My mom looked at me with pity. Most mornings she has to call my name at least four times from her prayer mat before giving up and trying to shake me awake in time to perform the Fajr prayer before the sun rises.

Usually I fail to recall my dreams, but that morning, two days after the start of the Israeli bombing campaign on the Gaza Strip, I struggled to catch one as I was aligning my prayer mat. I stood still for a moment, trying to hold onto it, but quickly became dizzy and squirmed into the nearest chair.

Instead, I tried to recall the things I had been consumed with before I fell asleep. I remembered that I had been thinking of every child in my building, and how their fear during bombings is tolerated by those around them as just one more side effect of the attacks. I thought of Sara, colorless expressionless Sara, who spent last night painting the naked sea in her drawing book. I thought of Aisha, who’s experiencing this for the first time; of Ghazal and Khamis, who are full of life despite the bloody attacks; of Walid and Leen and Salah and Yehia; of Nour’s children Sohaib and Lara. Gina, who is 14—older than the other children I was thinking of—forced her way into my mind. She’s been insisting that I accompany her and her friend Hala to the library for her birthday in ten days. I couldn’t help but wonder if we would make it that long.

I had spent the last month with Gazan children as part of my job with the evaluation and monitoring unit of the United Nations Relief and Works Agency (UNRWA). I was part of the team in charge of evaluating Summer Fun Weeks, a summer camp-style program run out of Gaza’s schools because UNRWA lacks the budget to rent a better-suited location. Because of the limited space in the schools’ yards, half of the activities were conducted in classrooms. But none of that seemed to matter to children who have little room to play out their suppressed childhoods. When I was in the field, I saw how the crowded schools were alive with chatter and laughter. Girls squealed and jumped on trampolines and bouncy castles while their hair flew around their faces. Their happiness was contagious.

On one flaming hot day in July, not long after Eid al-Adaha, UNRWA held what it called a “Family Day” for workers, where employees could bring their own children and other young relatives to nearby schools to participate in Summer Fun Weeks activities. That day I went to the Tal Hawa school accompanied by Nour, a new colleague, and her children Sohaib and Lara, along with Jawad, a senior colleague, and his children Salma and Siwar. I left the school burdened by thought. I felt the call of the young inner me who was never set free, the young me who let go of my hand long before her time. I brought my hand to my chest as though to reassure her that it was not her fault, that she had been failed. She experienced a war. She was pulverized in the process. I have now survived four. I found myself wishing it could be like this forever for all kids here: that these children could inhabit their childhoods, free from thoughts of war.

I was pulled out of my reverie by Nour’s voice calling: “Kholoud, we are leaving! Aren’t you joining us? Jawad is driving us home.” She was already in the car, sitting next to Jawad, who was folding his hands and resting his chin on the steering wheel. I got into the car but could not speak. Nour forced some conversation that I failed to keep track of; I caught her smiling at me more than once in the side mirrors. But I couldn’t smile back. I was filled with unspoken agony for the little me, alongside a deep sense of relief for the kids who had been able to let go and have fun that day. I didn’t know which feeling to express. It was easier to pretend I didn’t see her trying to talk to me.

Nour’s daughter, Lara, who lay sleeping next to me in the car, woke up intermittently during the drive. She had been running and jumping the entire day, and her face had been painted to look like a butterfly. Why did she bother making her blank baby face a shelter for all those colors? For such a big butterfly! The orange paint had already dried on her light-brown eyebrows and wide milky forehead. Every time her upper lashes intertwined with the lower ones, she drifted out of sleep. Soon it was noticeable that the paint was breaking off into fragments. The butterfly’s wings were being trimmed; she was disappearing. I offered to clean Lara’s face, but she protested as if I was trying to steal something from her. As if setting the butterfly free would take away the happiness she had been shrouded in for the day. At that moment, I had not been able to control my own face either: I could feel it contorting in unspeakable pain for Lara and all our children of Gaza. It takes so little to bring them such feelings of loss. The erasure of face paint they get at school in summer is enough.

Before my brief sleep, I thought of the loud, dissonant screams of the children during the shelling these last two days. Of their tears. Of the just-massacred little Alaa Qadoum, Ahmed Al-Nairab, Momen Al-Nairab. Poor Gaza children, they are doomed to taste burial twice, as if once is not sufficient: First of their childhoods, and then of their bodies, swaddled in the rubble of their own homes before they are buried in cemeteries. It was just a week ago that I saw children practicing childhood the way they are supposed to, but that must have been deemed too good for them. They are Gazan children after all; the world seems to think they should be denied any of the feelings of a normal childhood. Now none of the children are playing. Reality—our reality in Gaza—was restored soon enough.

I had almost given up on remembering my dream when it returned from out of the blue. In my sleep, I saw the young me. She was flying over the trampoline, riding the air with a wide butterfly painted on her face. It wasn’t my mom’s voice that awakened me. It was her. She still has something to offer, but it’s too late to catch hold of her. It’s time to let her go.

Kholoud Balata is a 22-year-old lecturer, poet, and writer. She was born in Gaza, Palestine, where she lives.

Dispatch
Ramadan in Gaza
“Thinking that I was having a nightmare, I forced my eyes to stay shut. But then, the second bomb came.”
Kholoud Balata
Sign up for our email newsletter, featuring exclusive original content
Short on time?
Sign up for our weekly Monday roundup of everything you missed in Jewish Currents last week.