Why Is My Teacher Hanging Out With Sebastian Gorka? 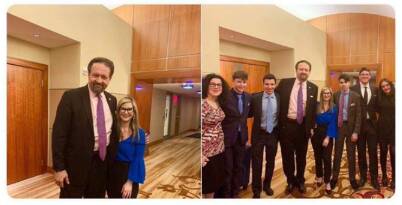 LAST MONTH, a delegation of my fellow students from TanenbaumCHAT, a Jewish high school in Toronto, attended the annual American Israel Public Affairs Committee (AIPAC) Policy Conference in Washington. They were accompanied by a teacher, Aviva Polonsky, and a vice principal. One of the many speakers who addressed them over the course of the weekend was Sebastian Gorka, former advisor to Donald Trump, who was taking part in a National Congregation of Synagogue Youth (NCSY) event separate from the AIPAC festivities. Polonsky, who is the president of the Federation of Teachers in Hebrew Schools in Toronto, took to her personal Twitter account to share a photo of her and Gorka, as well as one including a group of students. The tweet, since deleted, read: “Honoured to finally meet the great @SebGorka the former Deputy Assistant to @realDonaldTrump and expert on #counterterrorism. #students of @TanenbaumCHAT heard an inspirational talk &Thank you for taking the time to empower them to stand up to #Antisemitsim &#AntiIsraelrhetoric.”

I do not follow my teacher on Twitter, leaving me all the more shocked when Jewish Currents contributor Eli Valley’s retweet of her came across my feed. But I know who Sebastian Gorka is, and unlike many faculty and students at my high school, I understand that this is offensive and inappropriate.

Gorka is a Hungarian-born, far-right political advisor and columnist who works for Sinclair Radio, and until recently was a contributor on Fox News. He has worn a medal awarded to his father by the Nazi-adjacent Hungarian nationalist group, Vitézi Rend. Gorka has also endorsed the Hungarian Guard, the nationalist, paramilitary, wing of Hungary’s far-right Jobbik party. The former White House staffer has a history of blatant Islamophobic writings that have been condemned by the academic community. In 2016, Gorka’s contract with the FBI to give lectures on terrorism was terminated because of his anti-Muslim behavior. The Anti-Defamation League has asked Gorka to denounce his antisemitic and fascist ties, but he has failed to do so.

Within days of the original tweet, TanenbaumCHAT parents and alumni demanded an explanation for the shocking scheduling decision. A faction of former students put together an email addressed to the head of school, Jonathan Levy. After the backlash, Polonsky took to social media to respond. In a quickly deleted Facebook post, she wrote,

The students attended an NCSY event just like they attended many others. AIPAC is a political event with many views. Sebastian Gorka was extremely pro-Israel and gave a speech empowering the students to fight anti-Semitism. He had dinner with Bibi’s son yesterday here in a Washington – I guess that makes him an anti-Semite too, the left likes to bully conservatives into silence by calling everyone under the sun an anti-Semite. I will not be bullied. Sorry

The school later sent out a condemnation of Gorka, stating that he did not reflect the school's views and they would present solutions to the board to ensure similar incidents do not happen again. Unfortunately, the school had approved the itinerary before the trip, and did not see cause for concern in arranging for its students to hear from a figure who has publicly aligned himself with the perpetrators of the Holocaust.

Many students and staff came to Polonsky's support in the days following the tweet. An open letter, penned by former students who emphasized the school’s Zionist mandate, declared: “At the bare minimum, CHAT should be staunchly supportive of open inquiry and unapologetically Zionist. On Tuesday, we saw CHAT apologize for exposing their students to alternative Zionist viewpoints.” To Polonsky’s backers, Gorka being a neo-fascist who supports QAnon Ruth Bader Ginsburg death conspiracies is less troubling than, for instance, a guest whose support of Israel is less than unwavering.

Polonsky made a similar comment of Facebook: “Having heard Mr. Gorka speak out against anti-Semitism and in support of Israel on prior occasions, I understood him to be an ally of Jews and a supporter of our cause.” Both statements demonstrate a willingness to waive any concerning behavior from anyone willing to endorse Israel, no matter how odious their beliefs.

A key line in Gorka’s AIPAC speech is representative of a viewpoint that is common within the school: “I think the peace process (and this is absolutely personal opinion) is dead. And now it is time to support Israel so that it can defend itself.” Last year, in the midst of Gaza’s Great March of Return, TannenbaumCHAT mostly preoccupied itself with Israel’s security concerns, with little evident remorse for the unarmed protesters, journalists or medics who were killed. The words “occupation” or “settlement” are rarely heard from teachers—when these concepts are discussed, it is usually in the context of the great protection they provide for Israelis. Just last week, an event hosted by the Jabotinskyite Zionist movement Herut Canada was promoted within the school.

Besides the Gorka incident, TanenbaumCHAT recently welcomed Trainer Mark Vandermaas, a speaker who educates students about why Jews are “owners, not occupiers.” Vandermaas uses the 1922 Mandate for Palestine to justify Israeli control over all land west of the Jordan River. Similarly, in the school’s Jewish History course, students are taught about the myth of the Palestinian refugee, but little effort is made to counterbalance the perspective shown in videos from right-wing websites like PragerU.

It remains unclear how Gorka made his way on to the speaker’s list for an NCSY event directed at high school students. Asked for comment, Rabbi Micah Greenland, the director of NCSY, would only say, “We are currently discussing how decisions get made for speakers at programs.” Absent any further explanation, it appears that all of Gorka’s disconcerting attributes were set aside in light of his ardent and unrelenting support for Israel.

Ben Pike is a grade 11 high school student at TanenbaumCHAT, a community Jewish school in Toronto.