Why I’m Traveling to Alabama

Unions built our country. Now, we need to build them. 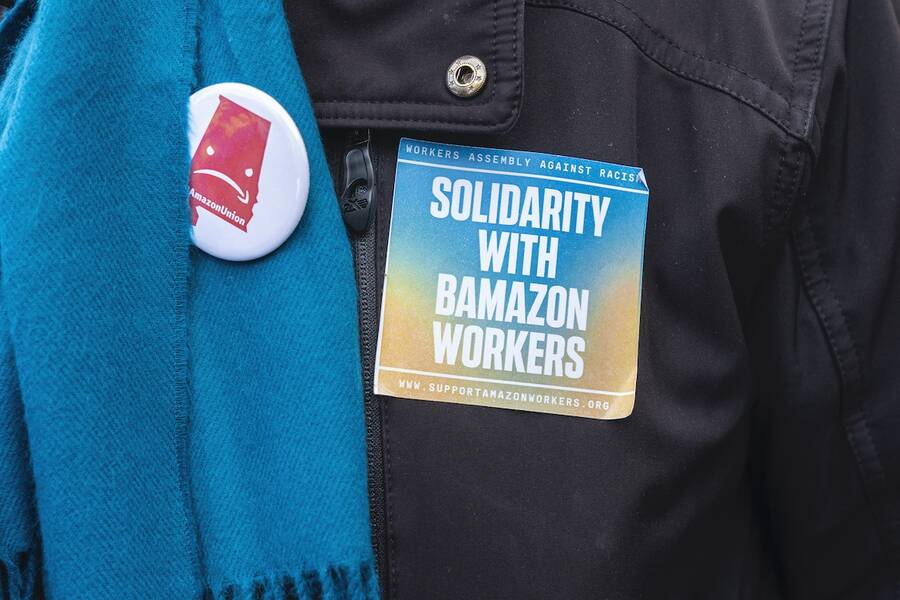 A protester at a rally in New York in support of the right of Amazon workers in Bessemer, Alabama to unionize, February 20th, 2021. Photo: Lev Radin/Sipa USA via AP Images
Tweet Copy Link Email Print

IN BESSEMER, ALABAMA a group of mostly Black Amazon workers are on the verge of making history. Some 5,800 workers at the town’s new Amazon fulfillment center, which packages and ships orders to customers across the South, are voting until March 29th on whether or not to form the first-ever labor union representing Amazon employees with the Retail, Wholesale and Department Store Union (RWDSU).

This historic effort could drastically change Amazon’s treatment of its employees, which has been notoriously awful. Scores of former employees have stepped forward to describe their appalling experiences working at Amazon warehouses; many have had to urinate in bottles because they weren’t allowed to take time off the floor to go to the bathroom, or have suffered serious injury due to ruthless, timed productivity quotas.

When workers contracted COVID-19, the company’s focus was on getting them back to the warehouse as quickly as possible, whether it was safe or not. Over and over, Amazon workers describe being treated like disposable robots instead of human beings whose health and safety the company cared for. Last month, the state of New York even sued Amazon for inadequately protecting its workers. Not only are Amazon’s practices immoral, they’re also illegal.

Meanwhile, the company’s profits have almost doubled since the onset of the pandemic. Amazon has spent some of those profits on disgusting union busting tactics; until now, it has successfully blocked workers’ attempts to unionize. Last year, reporting even revealed that the company is investing in technology to track and shut down pushes for unionization. It’s clear that Amazon knows that workers organizing to protect their rights and well-being is a threat to its business model, which depends on the endless exploitation and abuse of its labor force.

The first ever Amazon union would be a historic signal to the company, as well as to corporations everywhere, that workers are not going to accept exploitation and abuse. That’s why I’m travelling to Bessemer this week with a delegation of my colleagues. Amazon employs at least one million people, making it the second-largest employer in the US. (The largest employer, Walmart, has 2.2 million workers; Home Depot has about 400,000.) If workers in Bessemer take the incredibly brave and difficult step of forming a union and standing up to the atrocious greed of their employer, it could help catalyze the next wave of workers reclaiming their power across the country from corporate overlords.

In other words, the significance of the Amazon workers’ struggle goes far beyond their workplace, or even the company. It’s about the power of unions to remake the landscape of work. Unions deliver real, direct, material benefits to their members. Union workers on average make at least 11% more than non-union workers, controlling for education, occupation, and experience. A new wave of unionizations would also be a big step forward for racial justice. Workers of color benefit most from being represented by a labor union, and families of color with union members have five times the median wealth of families of color who are not union members.

A successful union drive at Amazon would also embolden workers seeking better conditions at other exploitative tech companies. The problem isn’t just that Amazon mistreats, underpays, and undervalues people; it’s that Amazon sells that mistreatment of workers to investors and business elites as innovation. Tesla, another company seen as an innovator, is the only non-union car company in the United States, and workers complain of a toxic culture and conditions. “Gig economy” standard bearers such as Uber, Lyft, and Doordash pay their workers as contractors—which enables the corporations to avoid providing them health insurance and other essential benefits they would receive as full-time employees.

Those practices should be seen for what they are: an assault by the management of these companies on the rights and livelihoods of their workers. But because of our society’s reverence for profit above all else, no matter how that profit is made, we revere these companies in our culture instead of shaming them. We call them forward-thinking instead of calling them inhumane. This must change.

When I touch down in Alabama, I will tell the Amazon workers I am proud of them—for taking the first step toward a union and for speaking out against injustice. We don’t have to settle for an economy that treats workers as expendable. We can build a system that respects the inherent power and dignity in every single one of us and that puts people ahead of profits. I’m standing with workers in Bessemer because the time for racial and economic justice is now, whether Amazon likes it or not.