At AIPAC’s conference, lawmakers were among Israel’s most dedicated advocates. 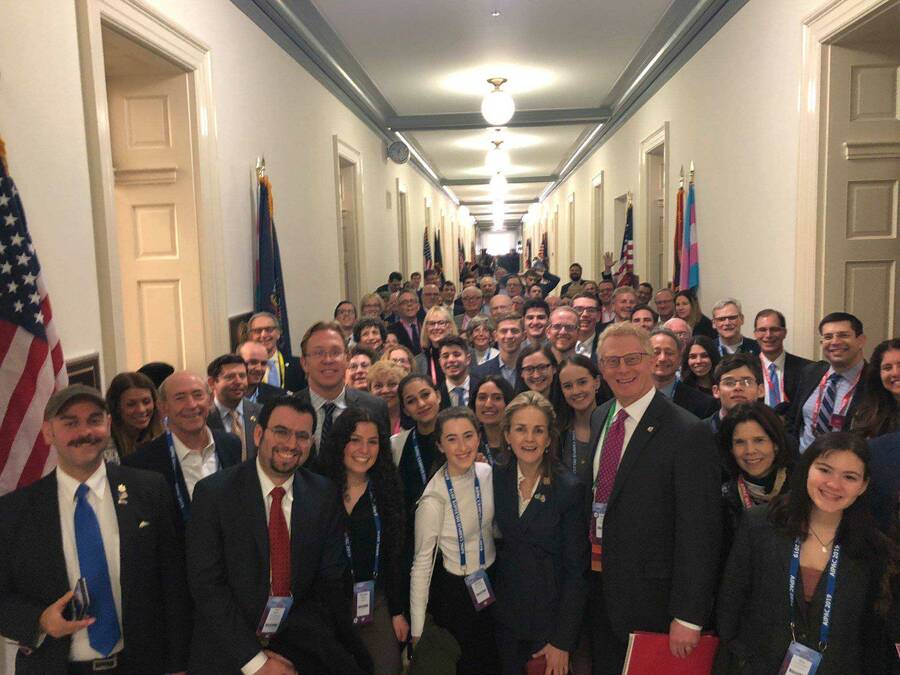 FOR THE PAST FEW WEEKS, Washington has been arguing over whether the American Israel Public Affairs Committee (AIPAC) uses money to influence Congress. The reality I saw at AIPAC’s annual policy conference last week was even more striking: the organization recruits politicians to act as its lobbyists.

Everyone present—AIPAC staffers, think tank officials, war profiteers, lawmakers, students—was on the same page. There were no dissenting voices. The same messages were hammered home over and over, echoing specific talking points provided to every conference-goer, and intended to be repeated on attendees’ visits to Capitol Hill.

In the lead-up to the event, multiple US politicians excoriated freshman Rep. Ilhan Omar for saying that Israel supporters push “allegiance to a foreign country,” after getting her to apologize for suggesting AIPAC buys influence in Congress. At the event itself, a bipartisan parade of senior lawmakers stood before AIPAC members to attack and misrepresent Omar once again, even as they plainly embodied her assertions by pledging their unconditional support for Israel and touting their work to protect the country’s interests in Washington.

On the first night of the conference, Democratic House Majority Leader Steny Hoyer pandered directly to the crowd with the reddest of meat: “When someone accuses American supporters of dual loyalty, I say ‘accuse me.’” Similar critical references to Omar were made by subsequent speakers ranging from Vice President Mike Pence to Democratic Senate Minority Leader Chuck Schumer, always to raucous applause.

With 18,000 attendees, the sprawling Walter E. Washington Convention Center was packed. AIPAC gave attendees color-coded lanyards based on how much they donate to the group annually, which enabled a shocking number of people to flaunt their wealth with lanyards indicating they give $3,600, $10,000, or more. Those numbers don’t even include direct contributions to political campaigns.

AIPAC raised $108 million between October 2016 and September 2017, according to its most recent tax return. Its charitable arm, which funds lawmakers’ visits to Israel, took in $65 million during that same time. In 2018, AIPAC disclosed spending more than $3.5 million on lobbying. But the organization’s real power comes from converting its donors and student supporters into grassroots lobbyists. Attendees were directed to promote a few primary agenda items in their meetings on the Hill, including increased US security assistance and foreign aid to Israel as well as legislation to condemn the Boycott, Divestment, and Sanctions (BDS) movement.

Reps. Nita Lowey and Kay Granger, respectively the ranking Democrat and Republican on the House Appropriations Committee, gave out their own advice on how AIPAC supporters should push for maintaining US aid to Israel. “As you’re going to the offices, you’re not asking for handouts,” Granger said. “You’re asking for continued support for one of our longest and most important allies, Israel.”

Granger advised attendees to refer to the rocket fire from Gaza into central Israel on Tuesday. “Just say, ‘look what’s happening this morning,’” she said, “I mean it couldn’t be more timely to come in and say, ‘we depend on you.’ When the attack that went on this morning that forced [Prime Minister Benjamin] Netanyahu to go back home . . . it is proof that you can never let your guard down.”

Lowey, the Appropriations Committee chair, said: “I know this year there are 18,000 citizens of the United States of America who are here, and when you come to our offices, you understand the issues, you’re well-prepared, so you have the respect of members. Sometimes there are disagreements, but when you come and share the facts, usually there’s support from both sides of the aisle, because you know what you’re talking about.”

Lowey also gave special thanks to the many students present at the conference. “What’s happening on college campuses worries me even more than what’s happening in Congress,” she noted, referring to rising criticism of Israel from BDS activists and others on the left.

The prevalence of Israel critics at universities was one of the dominant themes of the conference. A session on “Responding to Israel’s Critics” was not so much about engaging detractors of Zionism directly—indeed, the moderator recommended that audience members avoid talking with any of the protestors outside the conference—but about how parents can help teach their kids to respond to anti-Israel sentiments when they get to college.

One older woman in the audience choked up as she asked the panelists how she should react to her “wonderful” 20-year-old grandson, who attended AIPAC with her two years ago, deciding in college to support J Street, a center-left political group that advocates for a peaceful, two-state solution to the Israel/Palestine conflict.

In response, Andrea Levin, the executive director of the right-wing media monitor Committee for Accuracy in Middle East Reporting in America (CAMERA), called J Street “very disturbing” and accused the organization of running a propaganda campaign “claiming that Israel is demolishing structures.”

“We share your concern,” Levin said. “Unfortunately there are times when some of these very problematic campaigns occur, and J Street is not helpful to the pro-Israel side.”

Democratic Sen. Ben Cardin and Republican Sen. Rob Portman came to AIPAC to discuss their new resolution to target the BDS movement, which is designed to signal the Senate’s official opposition to BDS. The resolution says that BDS “undermines the possibility for a negotiated solution to the Israeli-Palestinian conflict by demanding concessions of one party alone and encouraging the Palestinians to reject negotiations in favor of international pressure.”

Portman rationalized the resolution thusly: “We shouldn’t be discriminating against Israel. We shouldn’t be trying to—as I think is happening now around the world in many places, including at the United Nations Human Rights Commission—trying to delegitimize Israel.”

Portman reminded the audience at least three times that their resolution would be introduced that afternoon, just 15 minutes after the panel; it came across like a television pledge drive, but for campaign donations. He then asked attendees for their help in building support for the legislation. “We need your support on that resolution,” he said. “We’re going to introduce it this afternoon. If you can help us with that, getting co-sponsors this week, that would be fantastic.”

On Tuesday afternoon, shortly after the conference programming ended, the narrow hallways of the Hill’s House office buildings were teeming with AIPAC lanyards and badges. A few dozen AIPAC donors and students filled the hallway outside the office of Rep. Madeleine Dean, a freshman Democrat who represents Philadelphia’s northwest suburbs. Dean met the crowd in the hallway.

“When we learned last night that it would be so many people, we hoped to find another room so that you could all be in one space ... and everything was booked,” she said. “I think that means that you and AIPAC have done a marvelous job of being here and making sure that we’re all up to speed on issues that matter greatly to our country, to Israel, and to our relationship.” Later, Dean posted a picture with AIPAC supporters on her Facebook account, and wrote: “We share a common belief that a safe and secure Israel is vital to the stability of the Middle East.”

It was a perfect demonstration of AIPAC’s power. Although the congresswoman had only been in office three months, she knew exactly what they wanted to hear.

Andrew Perez is a senior reporter for MapLight. His work has appeared in the International Business Times and the Huffington Post.