The probe is the first by a US agency into the death of the Palestinian American journalist. 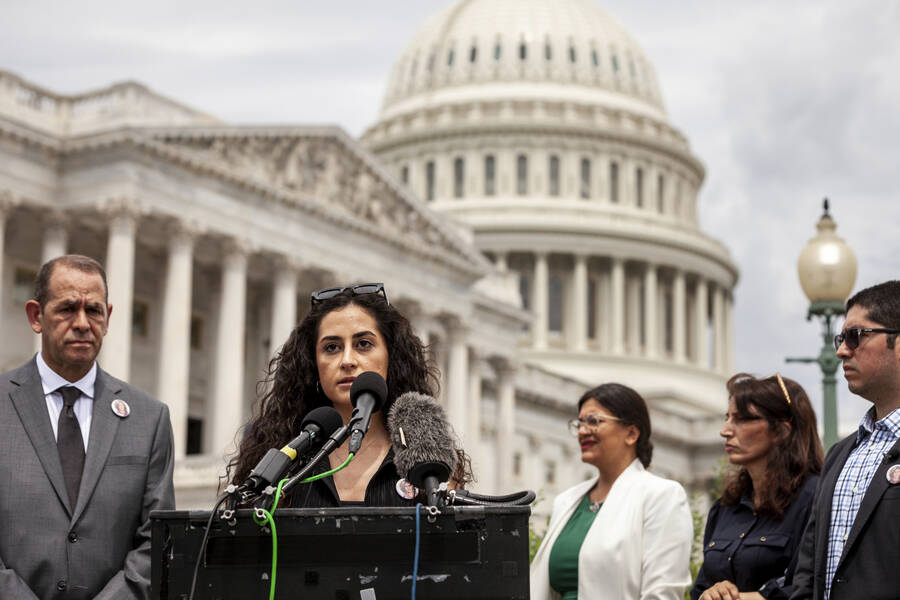 On November 14th, Israeli officials confirmed news reports that the FBI had opened a criminal probe into the killing of Palestinian American journalist Shireen Abu Akleh. This past summer, multiple investigations by major news organizations concluded that Israeli soldiers had shot and killed Abu Akleh, a prominent Al Jazeera correspondent, while conducting a raid in the West Bank city of Jenin on May 11th. Despite repeated calls from her family and the fact that Abu Akleh was a US citizen, no US agency had previously launched its own investigation into the killing. “This is a long overdue yet important step towards accountability,” said Hassan El-Tayyab, legislative director for Middle East policy at the Friends Committee on National Legislation.

But the opening of the FBI investigation won’t resolve a question that human rights advocates consider central to the case: whether Abu Akleh’s killers used US-made weapons in violation of US law, a determination that can only be made by the State Department. Israel receives an annual installment of $3.8 billion in US military aid, most of which it spends on US-made weapons; Israeli units like the ground troops that raided Jenin on May 11th regularly carry such arms. But US law prohibits the sale of US-made weapons to foreign militaries that commit human rights violations. As such, critics of Israel’s occupation have long argued that the flow of arms to Israeli military units that perpetrate such abuses is illegal.

Given the international attention on Abu Akleh’s killing—and the potential response to a finding that a foreign military used a US-made weapon to kill a US citizen—Palestinian-rights advocates hope that the case could generate the political will necessary to sanction Israel, or at least to cut off arms sales to the unit involved. But for that to occur, the US government must ascertain whether US-made weapons go to the unit killed the journalist, and whether the killing was a human rights violation. “The US has a blank check policy toward Israel that no other country in the world enjoys, and we need to know whether that has contributed or led to the killing of another US citizen,” said Raed Jarrar, advocacy director at the human rights organization Democracy for the Arab World Now. “That’s an extremely important political question, because when we show that our weapons and our money are killing our own citizens, that creates an additional motive for the US government to rethink the blank check.”

J Street, the liberal Jewish lobby that advocates for a two-state solution, also called for clarity on the role of US weaponry in the incident. “It’s important to know whether US weapons were used, because the killing of a US citizen is obviously contrary to US interests,” said Dylan Williams, the organization’s senior vice president for policy and strategy. “The Shireen Abu Akleh case has woken many people up to the fact that our government is not adequately ensuring that an allied military is using our arms appropriately.”

It’s ultimately the purview of the State Department to enforce laws relating to US arms exports. But officials at State have yet to publicly address whether US weapons may have played a role in Abu Akleh’s death. In July, spokesman Ned Price said a ballistics test overseen by US officials found that the bullet that killed the journalist had been too damaged for investigators to render a definitive conclusion about its origins. Price added that the US security coordinator in Israel/Palestine concluded that an Israeli soldier was “likely responsible.” (The State Department did not respond to a request for comment from Jewish Currents.)

Not content to wait for the State Department to act on its own, members of Congress are now applying pressure. On November 15th, Indiana Democratic Rep. André Carson introduced legislation—co-sponsored by 21 other House Democrats—that would require the FBI and State Department to submit a report to Congress identifying Abu Akleh’s shooters and determining whether they used any US weapons. “Knowing whether any American taxpayer-funded equipment was involved in the death of an American journalist is an important part of Congress’ oversight authority. I continue to encourage my colleagues to join me in this important effort to provide answers and accountability,” Carson told Jewish Currents in a statement. Lina Abu Akleh, the niece of the slain journalist, said her family supports Carson’s effort. “This bill is yet another important step toward justice and accountability, alongside a US criminal investigation,” she said. She added: “Whether any US weapons or services were used” is “something that has also really concerned us.”

Though the FBI probe satisfies one of the principal demands advanced by these members of Congress, as well as by the Abu Akleh family, the bureau has not commented on the investigation, and the probe’s specific parameters have not been made public. Israeli officials have thus far said that they will not cooperate with the investigation. The FBI’s press office had no comment in response to an inquiry from Jewish Currents.

Senate Democrats have also sought to force the State Department to investigate the incident. Their primary tool is the Leahy law—named for its author, Vermont Senator Patrick Leahy—which prohibits foreign military units that engage in “gross human rights violations,” including extrajudicial killings, from receiving US arms and training. In July, Senators Leahy and Chris Van Hollen introduced a measure that would require the Secretary of State to submit a report to Congress on whether the Leahy law applies in the Abu Akleh case. “Some members of Congress are trying to help the administration actually follow through on its commitments to uphold international and US law,” Matt Duss, a visiting scholar at the Carnegie Endowment and the former foreign policy advisor to Senator Bernie Sanders, told Jewish Currents.

In order for the Leahy Law to apply, three criteria must be met: The foreign military unit in question must have committed a “gross” human rights abuse, and must be the recipient of US-made weapons. In addition, the foreign government in question must have refused to hold the soldier who perpetrated the violation accountable. Human rights advocates argue that all three factors are present in the Abu Akleh case. In June, Al Jazeera published an image of the US-made 5.56-mm bullet that it says killed Abu Akleh. Eyewitnesses to the incident interviewed by CNN called the shooting a “targeted attack” on a clearly labeled member of the press, while an investigation by Forensic Architecture, a human rights research group, alleged that Israeli forces intentionally killed Abu Akleh, making her murder an extrajudicial killing. And in September, Israeli officials finally acknowledged that one of their own soldiers “likely” killed Abu Akleh; despite their admission, they also said they would not conduct a criminal investigation into the killing. The soldiers did not intend to kill Abu Akleh, officials said. Instead, they had only taken aim at “terrorists.”

Though the FBI investigation won’t reach a conclusion on whether US arms sales to Israel are lawful, by determining whether the killing of Abu Akleh was intentional, it could help direct the State Department’s next steps. “Once the investigation is complete, and to the extent its conclusions are made a matter of public record—or any of its material findings officially shared with the State Department—that report could be used in an overall analysis of a Leahy determination if the [Israeli] unit was being nominated for [US] assistance,” said Dan Mahanty, a former State Department official.

But Jarrar argued that the State Department need not wait for the conclusion of such a probe: There’s already a mountain of evidence in the public record about the incident, thanks largely to news organizations and human rights groups. Advocates have long complained that enforcement of the Leahy Law is lax in the case of Israel. “The Biden administration lacks any political will when it comes to holding Israel accountable,” Jarrar said. “I’m not holding my breath waiting for the administration to do anything meaningful.”