What Could Have Been

On Father of the Bride, Vampire Weekend’s Ezra Koenig speaks to the crisis of Jewish identity in the shadow of Zionism’s broken promises. 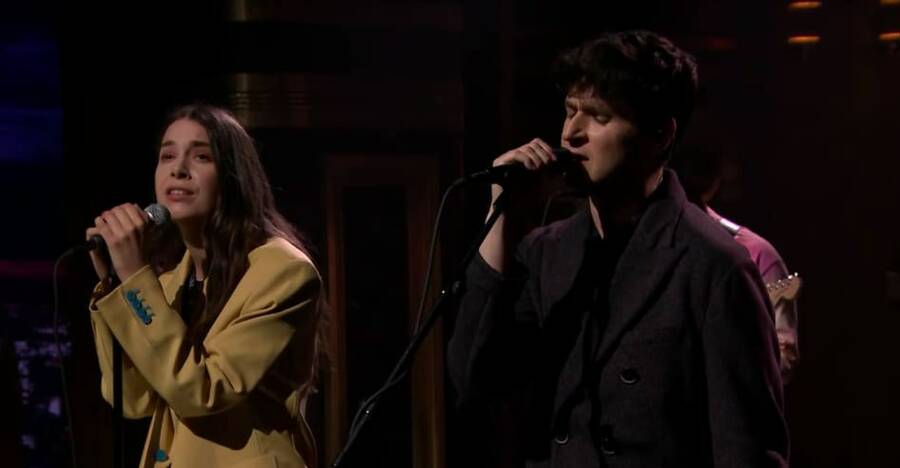 A FEW DAYS AFTER the release of Vampire Weekend’s newest album, Father of the Bride, the band performed the single “This Life” on The Tonight Show Starring Jimmy Fallon, backed by the three sisters who comprise the band Haim. Afterwards, Vampire Weekend (and one of the Haim sisters, Danielle) stuck around to play another song—the album’s melancholic final track, “Jerusalem, New York, Berlin”—as a web exclusive. (Sometime in the weeks following, NBC took down the video of this performance, and no version has yet surfaced on YouTube, making it unusually ephemeral for the digital age.) When the song begins, Koenig stands center stage, lit by a spotlight. After a short piano intro, Koenig croons, “I know I loved you then / I think I love you still / But this prophecy of ours / Has come back dressed to kill.” It was all pretty standard fare for a late-night show performance from an indie pop band, with all eyes focused on the handsome frontman—except that the lyrics he was singing seemed to engage with a subtle critique of Zionism.

The three cities named in the title are repeated twice in each chorus, allowing the listener to sit with their significance:

1917 is the year that the Balfour Declaration was signed. Here, Koenig extends the chorus’s melancholy to this event, and to the Zionist century that has issued from it. What could have been if British colonial forces had not favored Jewish settlers in their drafting of the Balfour Declaration following their defeat of the Ottoman Empire? What could have been if Zionists had not created an ethnostate in Palestine in 1948?

In light of these later lyrics, the opening lines—“I know I loved you then / I think I love you still / But this prophecy of ours / Has come back dressed to kill”—no longer seem like the stuff of simple pop songs. Rather, they seem to refer to the crisis many young diaspora Jews are facing with respect to Zionism, the beloved “prophecy” that “has come back dressed to kill.” Watching the Fallon performance, with Koenig belting the chorus, joined by Danielle Haim singing harmony behind him, I realized: I was watching two Jewish American millennials sing about the crisis of Jewish identity created by the State of Israel on a nationally syndicated television show. But in its subtletly, the performance doesn’t make a statement so much as it opens a line of questioning—starting with What could have been? and leading, perhaps, to: How do we move forward?

Though this song stakes out new thematic territory for Koenig’s music, Koenig has been less reticent to present himself as a Jewish critic of Israel on Twitter, where it’s clear that he has been questioning Zionism himself. During Hannukah in 2015, he tweeted, “islamophobia & anti-Palestinian hatred are horrifying. jewish ppl, we can’t celebrate a holiday abt religious freedom w/o addressing this.” A year later, he offered this: “my Hanukkah wish is for Bernie Sanders to decisively overtake Netanyahu as the world's most famous politician of Jewish descent.” In the years since, he’s retweeted Jewish Voice for Peace and outlets such as The Intercept, Electronic Intifada, and The Nation, all of which toe a strong leftist line on Israel/Palestine. Most intriguing to me, in March, Koenig tweeted this, in response to Meghan McCain’s claim that cartoonist Eli Valley's satirical depiction of her was antisemitic: “what does anti-Semitic even mean to you? he’s a Jewish cartoonist who has spent his career examining Jewish identity, Zionism & anti-Semitism. if this is the most anti-Semitic thing you’ve ever seen, you haven’t spent any time examining those issues yourself.” Koenig’s familiarity with and affinity for Valley’s work—which includes strong critiques of Zionism on the basis of Jewish identity—says a lot about his leftist Jewish politics.

Koenig’s politics seep through in a few other moments on Father of the Bride. For instance, the song “Sympathy” contains a reference, in the third verse, to “Diego Garcia, surrounded by the waves”—a small atoll in the Indian Ocean used as an American military base since the early 1970s, long rumored to operate as a black site, which has been used in multiple missions during the so-called War on Terror. Earlier in the song, Koenig sings: “Judeo-Christianity, I’d never heard the words / Enemies for centuries, until there was a third.” Here Koenig points to the way that the term “Judeo-Christianity” is used to exclude Muslims from a category of whiteness or Americanness. His suggestion is that Christians, after persecuting Jews for centuries, have now nominally accepted them as politically advantageous allies in the fight against “a third”—Islam. After this verse, the chorus takes on a new meaning, “Now we’ve got that sympathy / What I’m to you, you are to me / Let’s go.” In this reading, the “we” are Jews, while the “you” is the white Christian power structures in the United States and Europe that have persecuted and excluded Jews for centuries. Now that many Ashkenazi Jews have been assimilated into whiteness, people on the right and in the center have routinely used false accusations of antisemitism to whip up anti-Muslim, anti-Black, and anti-Palestinian sentiment. In “Sympathy,” Koenig seems to offer a subtle rejection of these politics.

Even as I wonder what would be possible at this moment if Koenig made explicit these subtle critiques, I feel that his lyrics are a substantive commentary. In the midst of a cultural paradigm shift, in which young Jews are increasingly questioning the unfettered support of Israel in most mainstream Jewish institutions (and in mainstream American politics), it’s important that Koenig’s music has begun to speak to these issues. Koenig is more famous, more legibly Jewish, and further left than any other Jewish musician of our generation, and when he speaks out—whether explicitly in a strident tweet, or more subtly in an oblique lyric—it’s progress.

Sophia Steinert-Evoy is an audio editor and producer working in New York City.

Conversation
Selling the Holocaust
Three writers and grandchildren of Holocaust survivors, including Plunder author Menachem Kaiser, discuss the conventions of the “3G memoir” and the commodification of Holocaust stories.
Arielle Angel

Essay
Reclaiming the Covenant of Fate
As American Jewry’s Zionist consensus crumbles, we must learn to address one another across communal divides.
Peter Beinart
Essay
The Nakba Demands Justice
Reckoning with the ongoing Palestinian catastrophe means giving the land back.
Kaleem Hawa

Conversation
There’s No Such Thing as “Free Speech”
Writer P.E. Moskowitz discusses how the left can take back the “technology” of free speech.
Sophia Steinert-Evoy
Sign up for our email newsletter, featuring exclusive original content