Toward a Candid Confrontation

On the Women’s March, antisemitism, and accountability. 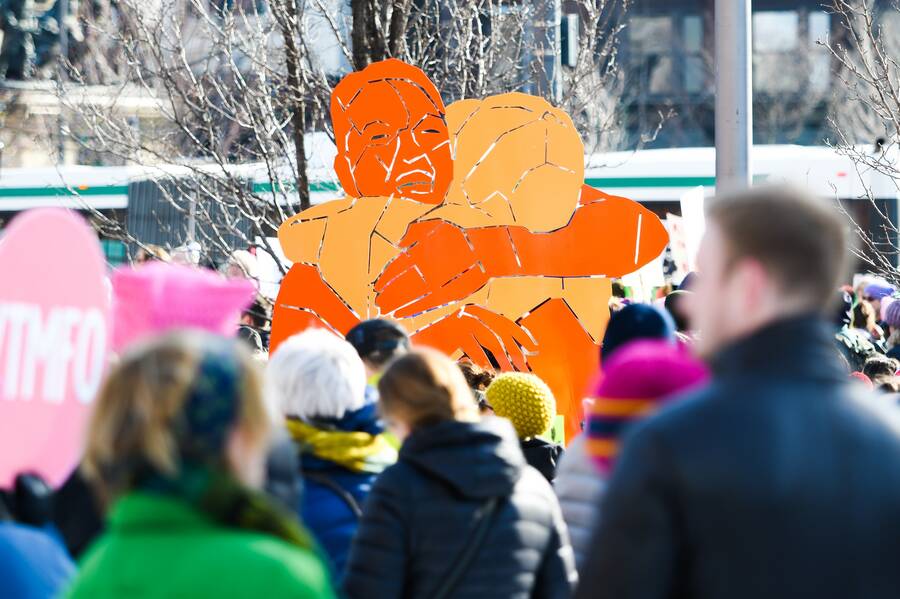 “A genuinely candid confrontation between American Negroes and American Jews would certainly prove of inestimable value. But the aspirations of the country are wretchedly middle-class and the middle class can never afford candor.”

IT IS LAMENTABLE, if not surprising, that this weekend’s Women’s March has become a referendum on the movement’s ability to sustain broad coalitions, and on the black-Jewish relationship in particular.

Much of what can be said about the complicated relationship between black people and white Jews in America has already been said, and today black Jews perhaps do the most to advance our collective thinking on a subject that should concern all of us. Few writers have tackled the subject as handily as James Baldwin did over 50 years ago in his landmark 1967 essay “Negroes Are Anti-Semitic Because They’re Anti-White.” According to Baldwin, the white Christian ruling class has allowed many white Jews to rise from destitution to partake of American bounty—an opportunity not afforded to their black neighbors, and requiring complicity and participation in their exclusion and exploitation. And while no rational person can deny the history of Jewish oppression, it is equally irrational to equate our material situation with that of the black population here and now.

As Baldwin puts it:

In the American context, the most ironical thing about Negro anti-Semitism is that the Negro is really condemning the Jew for having become an American white man—for having become, in effect, a Christian. The Jew profits from his status in America, and he must expect Negroes to distrust him for it. The Jew does not realize that the credential he offers, the fact that he has been despised and slaughtered, does not increase the Negro’s understanding. It increases the Negro’s rage.

This is an old dynamic with old hurts. So even though the Women’s March “crisis” is stoked by individuals and organizations seemingly hell-bent on tearing down the movement’s leaders, let’s assume for a moment that the accusations of antisemitism hold some truth. What does it mean for Jews, and for the Women’s March?

A little-discussed flash point in the history of the black-Jewish relationship will make this inquiry clearer. Fifty years ago, just one year after Baldwin’s essay appeared in the New York Times, a crisis roiled New York City’s black and Jewish communities. The 1968 Ocean Hill–Brownsville teachers’ strike exploded when new, black leadership of the school board resulted in the firing of a number of white teachers and administrators, nearly all Jewish. In reaction, the majority-Jewish United Federation of Teachers struck for over a month. That strike set the stage for an acrimonious intercommunity battle, where accusations of racism and antisemitism flew freely.

The conversations about the strike featured in a 1969 WABC-TV program feel ripped right out of the present. A middle-class Jewish mother whose son is being bullied at a mostly black school insists that she has never taught her child to “dislike anyone because of their race, color, or creed,” before her son jumps in to offer nakedly parroted remarks about how blacks just want a welfare handout, and the negligible value of learning about “Afro-culture.” (“We’re not really against them, they’re going against us after all that we gave them.”) On the other side, citing Jewish participation in the capitalist exploitation of black people, a black social studies teacher calls into question Jewish claims of being on the side of the oppressed, concluding that Jews have “fled our camp and joined the camp of the power structure.”

On the surface, the fight appeared to pit black people and Jews against each other as black people and Jews—that is, it seemed that the point of the fight was the bigotry itself. Yet on deeper inspection, this was actually a contest over institutional control of the community’s schools. At the time, the (largely Jewish) teachers and administrators’ union had that control and the jobs that came with it—the students’ communities did not. Like sparks emitted by friction, the bigotry spouted on both sides was a symptom, not a cause, of the underlying contest.

Was this the “candid confrontation” Baldwin was hoping for? Decidedly not. After all, what is more inherently duplicitous than bigotry, the socialism of fools that short-circuits our ability to perceive our actual common enemies? Hate endures precisely because this is its role. Maybe that’s why many neoliberals would rather raise millions in the name of “fighting” an abstract, sourceless “hate,” rather than countering the system that gives hate life in the first place—after all, this system makes them rich.

What this comes down to is the fact that the black-Jewish relationship is not an interpersonal dispute, nor is it a tribal conflict between two peoples. No simple apology or agreement can free us from the economic system that pits us against each other. The reconciliation we do need, and need badly, will take place in the knowledge that our collective house is on fire, and that our long-term survival depends on organizing toward a radically different economic and material reality that serves us all. This is all the clearer set against the Trump administration’s abetting of murderous white nationalists, and the across-the-board downward mobility of the millennial generation.

The coming reconciliation will require an organization that embodies those hopes, where rank-and-file members know that they are in control of their movement, and are led by individuals who are fundamentally accountable to that dream and that base of support. The question is: Could the Women’s March be that movement?

This question is difficult to answer because the phrase “Women’s March” means two different things simultaneously. On one level, the Women’s March is the name given to an energetic, grassroots resistance to the Trump regime. On another, Women’s March, Inc. is a nonprofit with centralized leadership and messaging, and exclusive control over its prodigious financial resources, garnered from small and large donors, institutions, and merchandising.

The potential of the people-powered mass movement we call the Women’s March is clear. It formed in a peculiar way: a viral Facebook page, started by someone without a national platform. Without discounting the labor of the founders and early leadership, it’s important to acknowledge that the march became the sensation it was—the largest single-day protest in US history—not because of a leadership cadre, but because of a visceral need to oppose Trump across broad swaths of left-of-center America. As committed progressives, we can only hope that for those millions, challenging the Trump administration is just the beginning of their entry into permanent and intense struggle to better our society at its core.

The Women’s March, the nonprofit, is more complicated. Where did this nonprofit come from? As Tablet lays out in the story that broke the accusations of antisemitic statements by some of the Women’s March leaders, the organization was convened by Michael Skolnik, a self-styled “civil rights activist” derided by the late Anthony Bourdain for “his saccharine, hashtag-driven expressions of solidarity, his messianic certainty that he is in some way a vanguard of something.” Brought to prominence by his once-good friend, the now-disgraced media mogul Russell Simmons, Skolnik played a key role in hand-picking leadership from his own nonprofit, The Gathering for Justice, where he is on the Board of Directors.

This origin story gives us good reason to be skeptical. The actual movement, the reaction to the Trump election, was already moving at the point of the nonprofit’s creation. The nascent nonprofit served to name these conditions, to articulate demands in its name, and to appoint leaders to stand at its head. The idea of centralization is not inherently nefarious—it’s helpful to have leaders. And this process isn’t remotely unique to the Women’s March. But it is inherently unaccountable. Unless you’re a major donor with big money to leverage, or you can generate enough noise to cause serious brand damage, a nonprofit with no membership or democratic organization will never be forced to listen to you. And because your relationship to it is necessarily so thin—that of observer, consumer, retweeter, marcher, but never member—neither can it convert mass mobilization into mass organization.

This problem will be familiar to any conscious member of the Jewish community. Our community is “represented,” both on Capitol Hill and intracommunally, by multimillion-dollar nonprofits over which the average Jewish person has functionally zero control. Campus Jewish organizations claim to empower students, but routinely silence the voices of students with which they disagree. With rare exception, the organized Jewish community is largely composed of these fundamentally undemocratic bodies, the playthings of well-heeled boards. Unless we expect celebrity activists and elite organizational professionals to lead the candid intercommunal conversation Baldwin desired, then under the present circumstances we have to assume that candor is not only unforthcoming, it’s impossible.

Like the back and forth of the Ocean Hill–Brownsville teachers’ strike, the crisis of unaccountable movement leadership is yet another symptom of our common disorganized and oppressed condition. But unlike the strike, what’s at stake in the contest over the Women’s March isn’t a number of jobs and control of a particular school district; it’s far larger. The fierce resistance sparked by the Trump administration needs leaders, and taking power requires mass organization across race/class divides. We cannot now, as Jews, abandon our stake or our personal responsibility. As we build, white Jews owe our POC allies constant vigilance against the racism that we have imbibed and benefited from in our racist society. Likewise, Jews deserve to be taken seriously as partners, and our fears and hopes deserve respect. Jews of color, naturally, deserve both from both.

So, should Jews go to the Women’s March? Yes. Movement leaders have certainly demonstrated the desire to do better. Privately, they’ve been meeting with Jews for Racial and Economic Justice, Bend the Arc, and the National Council of Jewish Women, who have reported progress through dialogue. Publicly, they have added Jewish women to their Unity Principles, and, in a concession to how these issues have overshadowed their organizing, the entirety of their current website homepage consists of statements acknowledging harm to the Jewish and LGBTQ communities, denouncing antisemitism and homophobia, and distancing themselves from statements by Louis Farrakhan. Meanwhile, in our own community, Jewish women of color have circulated a sign on letter, stressing the need to work toward collective liberation.

And besides, who said this was going to be easy? As Sarah Seltzer wrote in these pages in her defense of intersectionality, being uniquely concerned that leftist spaces are not comfortable for Jews belies the fact that none of our spaces—political or otherwise—are strictly “safe”:

Intersectionality acknowledges that no open space, even the most progressive or well-intentioned, is free from dominating social forces. So any person walking into a Women’s March or socialist meeting or a local Democratic canvass might experience discrimination or even hatred: a Jew, a woman, a queer or trans person, a person of color . . . The patriarchy is everywhere. White supremacy is everywhere. Antisemitism is everywhere, too.

The Women’s March is not the perfect movement for this moment. But is not our tradition about working through imperfection, about struggling toward a messianic vision of wholeness? This weekend’s march provides an opportunity to recommit to building coalitions—to being in the room despite the discomfort, and working toward the “candid confrontation” that Baldwin prescribed. It’s up to all of us to build a movement that can hold that conversation.

Responsa
Beyond Grievance
Though it may be a potent political tool, grievance can also maintain our investment in our own oppression.
Arielle Angel
Responsa
On Loving Jews
For Jews engaged in Palestine solidarity work, what might be gained by refusing excommunication from our own communities?
Arielle Angel