“They Have Never Lived One Day of Freedom”

An interview with Rep. Betty McCollum, author of a bill that would restrict US military aid in support of the occupation. 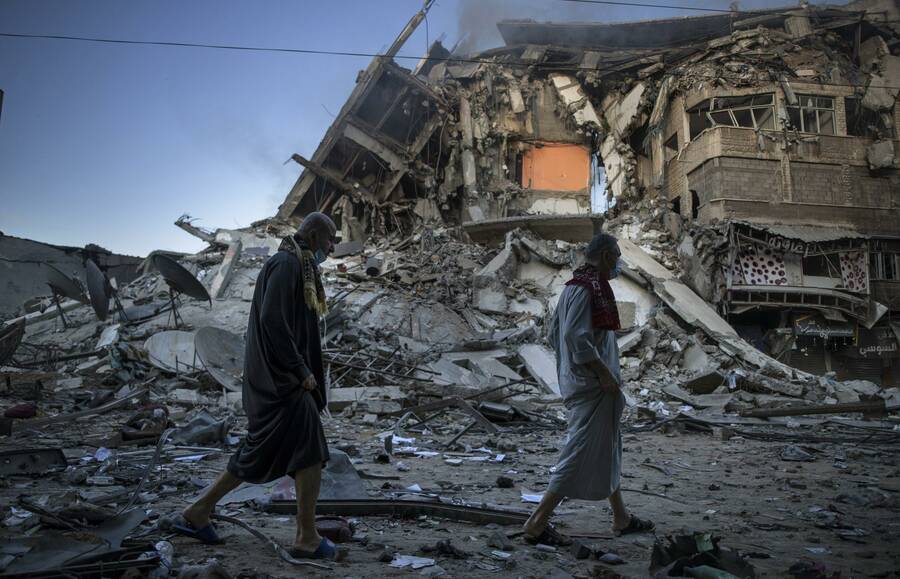 Palestinians walk next to the remains of a destroyed 15-story building after being hit by Israeli airstrikes in Gaza City, Thursday, May 13th, 2021. Photo: AP Photo/Khalil Hamra
Tweet Copy Link Email Print

Rep. Betty McCollum is a Minnesota Democrat who has emerged as one of the handful of elected officials in Washington taking meaningful steps to hold Israel accountable for the occupation. Rep. McCollum has introduced a bill, H.R. 2590, that would prevent US military aid from funding detention of Palestinian children, seizure or destruction of Palestinian property, or annexation of Palestinian territory. While there is virtually no chance the bill itself will become law, it is reflective of a wider shift in the debate on Capitol Hill.

This week, I spoke to Rep. McCollum about the ongoing violence in Israel/Palestine and how her bill could help address it. Our conversation has been condensed and edited. It originally appeared in yesterday’s email newsletter, to which you can subscribe here.

Alex Kane: What’s your response to the recent violence in Israel/Palestine? Does your legislation connect to what’s going on right now?

Rep. Betty McCollum: At its core, military occupation is a system of violence and repression that infects a society and empowers extremist elements—in this case, Jewish extremists and Palestinian extremists. The Israeli government’s decision to advance policies to evict Palestinian residents from their homes in [the East Jerusalem neighborhood of] Sheikh Jarrah because they are Palestinians is racist, discriminatory, and inherently an act of state-sponsored violence. The result is more violence—rocks, grenades, rockets, air strikes—which leads to suffering and death. When will it end? Why are US tax dollars being used to fuel the repression, violence, and persecution of Palestinians? Israel has legitimate security concerns, but does stealing Palestinian land, killing Palestinian children, and destroying Palestinian homes really advance Israel’s security? And why is Congress allowing US military aid to be used to effectively erase Palestinian society? The US is funding a repressive regime, and I believe that is wrong.

AK: A lot of people watching your work on Palestinian human rights wonder how and why you got so involved in this issue. What in your personal background, experience, or values explains your involvement?

RBM: I am a mom and a grandmother. Family is important to me. Throughout my 20-year career in Congress, I’ve always worked to ensure that the fundamental needs of children and families are being addressed. When I read the 2013 UNICEF report that outlined the systemic military detention of Palestinian children by Israeli security forces and the blatant mistreatment and abuse suffered by those children, some of them 12 years old and younger, I could not ignore it. Clearly, a powerful government using its military to target children is a human rights abuse. In this case, it is a systemic weapon used by Israel to enforce the military occupation, sow fear in families and communities, and tear apart Palestinian society. The fact that US military aid to Israel enables this system of repression and child abuse with broad support from Congress is a betrayal of our values and interest as Americans.

AK: It’s been a few weeks since your bill to prohibit US aid from fueling Israeli human rights abuses has been introduced. How has the bill been received so far in Congress? What’s your response to the attacks on the bill being waged by groups like Democratic Majority for Israel (DMFI) and AIPAC?

RBM: My bill, H.R. 2590—the Defending the Human Rights of Palestinian Children and Families Living Under Israeli Military Occupation Act—is a vehicle to inspire and mobilize people of faith, human rights activists, civil rights leaders, and policy makers to ask a simple question: Do you want US taxpayer dollars to assist Israel in imposing its military occupation and persecution of the Palestinian people? I say no. More than a hundred civil society organizations—including prominent Jewish organizations such as J Street, Americans for Peace Now, T’ruah, and Jewish Voice for Peace—have endorsed H.R. 2590.

But it is true that the overwhelming majority of members of Congress—with strong support from AIPAC, Christians United for Israel (CUFI), and DMFI—support no restrictions on US military aid, giving Israel the green light to abuse the human rights of Palestinian children, demolish Palestinian homes, and annex Palestinian land for Jewish settlements. Is Israel’s security dependent upon its military arresting, interrogating, and brutalizing a 14-year-old Palestinian child, then trying him before a military court, before sentencing him to prison? Or demolishing the homes of hundreds of Palestinian families? These are policies of persecution, not self-protection, and they systematically enforce the military occupation with US support.

AK: Your outspokenness on how US military aid to Israel subsidizes human rights violations has led to ugly blowback from AIPAC, which has labeled your policies “antisemitic” and, in a now-deleted petition, compared you to ISIS, suggesting that your threat to Israel is on par with a terrorist group’s. At the same time, some have noted that your positions on Israel have escaped the kind of sustained attention that your colleague Rep. Ilhan Omar has received for speaking out on Israel. What’s your response to the attacks you’ve faced, and do you see a difference in how you and Rep. Omar have been treated?

RBM: Rep. Omar and I are both from Minnesota, where our constituents value human rights and expect us to stand up for marginalized and vulnerable populations at home and around the world, especially when US government policies are contributing to the suffering. In politics, name-calling is used to discredit and dismiss people rather than engage in a legitimate policy debate. This is a tactic that has been used against me and supporters of my legislation. I don’t know a single Jewish colleague in Congress who would say I am antisemitic or that my work to protect the human rights of Palestinian children and families is anything but a reflection of my values. I want Israelis to live with peace and security, and I want the same for Palestinians. I promote human rights for Palestinians and their inherent right to be treated with dignity because it is absolutely necessary to achieve peace. I believe Rep. Omar feels the same way. The alternative is the status quo: dehumanization and conflict that undermines Israel and is destroying Palestinian lives.

AK: I think a lot of people reading this will wonder how they can get their member of Congress to support your bill, or at least speak up more on Palestinian human rights. What advice would you offer to those looking to convince their representatives to join you in the fight for Palestinian rights?

RBM: Palestinians want the same things we all want—freedom, equality, justice, and the opportunity to build a better future for their children. But many of my colleagues don’t want to think about the reality on the ground. For example, a 54-year-old Palestinian man or woman living in the West Bank, East Jerusalem, or Gaza has lived every day of their life under Israeli military occupation. They have never lived one day of freedom—they are stateless captives of the occupation. They need the permission from their occupiers to visit friends, to plant a tree, to go to work. No American would tolerate such treatment.

Members of Congress should be reminded: At a moment in US history when systemic racism and discrimination is being exposed, condemned, and rejected, why is Congress using our tax dollars to fund the repression and abuse of the Palestinian people? Citizens have a right to ask these questions of their federal representatives, and they have a right to an answer. Yes, Israel has a right to security, but does Israel have the right to demolish Palestinian homes, annex Palestinian land, and persecute the Palestinian people using US taxpayer dollars? In my opinion, that is not a difficult question to answer.

AK: Is there anything else you want people to know about this bill?

RBM: H.R. 2590 will likely never pass Congress. It will likely never get a hearing, even in a Democrat-controlled House. But it will be used by AIPAC, CUFI, and DMFI to demonize every courageous colleague who signs on as a co-sponsor because of their commitment to human rights. This bill speaks the truth about the policies of persecution designed and imposed by Israel on the Palestinian people. This bill will eventually transform US policy on Israel/Palestine because it is mobilizing civil society across our country to influence the debate among Democrats—the majority party in Washington. The power of this legislation is forcing a legitimate, open, transparent, and policy-focused debate while exposing the reality that the status quo is the path of endless conflict. I want a path to peace, which means telling a country we consider an ally that their systemic persecution of the Palestinian people is no longer tolerable. We can’t force Israel to stop this destructive behavior, but we can certainly stop Israel from using our money to do it!