Trick of the Light

In a film adaptation of Nella Larsen’s Passing, racial passing is about seeing as much as being seen. 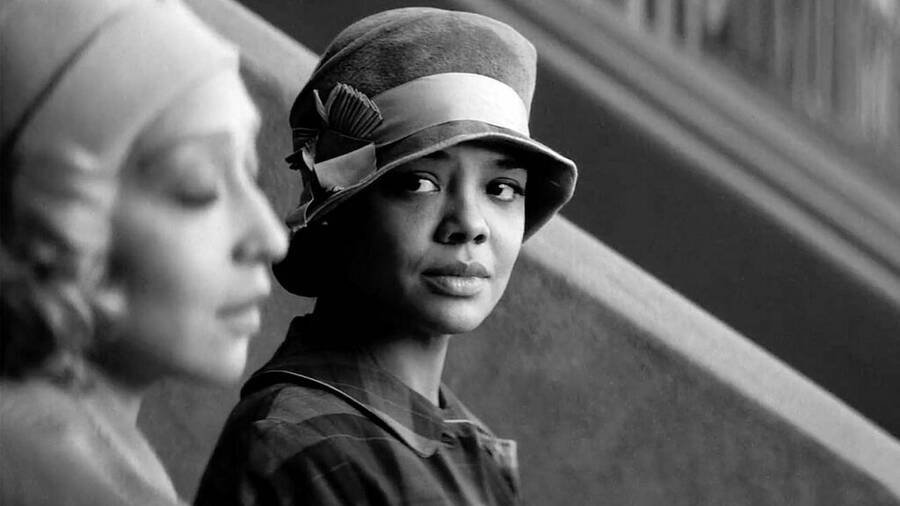 With her 1929 novel Passing, Nella Larsen sought to breathe new life into an old archetype. In court cases, reportage, and especially in fiction, Americans have long fixated on the appearances and lives of mixed-race people—particularly those light enough to “pass” as white. By the 1920s, “tragic mulatto” stories were a certifiable subgenre, coinciding with the height of public panic about the thousands of secret Negroes allegedly passing in New York City and other urban centers. Sensational fiction capitalizing on this enduring interest typically featured melodramatic revelations of a protagonist’s secret blood followed by her anguished demise upon failing to find acceptance on either side of the color line. But Larsen, herself mixed-race, pursued a new idiom for such figures. Describing herself as “warped” by the “Europeans and American moderns,” Larsen sought to emulate a more inward-looking form of fiction in which, as she wrote, “actions and words count less and the poetic conception of the character, the psychology of the scene more.” The ends her mixed-race anti-heroines meet are no less distressing than those of their predecessors, but these figures also manage to be cutting, elegant, and beguilingly flawed along the way.

Passing, set in a chic 1920s New York, centers on the intense bond between two women light enough to pass. The dutiful Irene largely refuses to do so and works hard to present herself as an upstanding mother, wife, and “race woman” devoted to the cause of Negro advancement. The vibrant and audacious Clare, on the other hand, passes as white in her marriage but spends most of the novel risking this life to secretly reconnect with Irene and her bourgeois circle in Harlem. Given its emphasis on the work involved in passing, which requires vigilant mindfulness of one’s comportment, Larsen’s novel has a cinematic sensibility from the start. Passing pays careful attention to the look of things as Irene, our guide for much of the novel, begins to suspect that Clare’s lovely surfaces may conceal deep treacheries. Larsen telegraphs her characters’ inner turmoil through small gestures and intense stares that hint at the gulf between their crafted exteriors and the feelings, motives, and desires roiling just underneath, remaining opaque even to themselves. The act of passing evokes racial trickery, but in Larsen’s hands, passing also describes the way exteriors writ large paper over the raw and messy materials of our interior lives.

Nearly a century later, the director Rebecca Hall has realized Passing’s cinematic potential in the book’s first film adaptation. Hall’s version preserves Larsen’s careful attention to poetic characterization, the slow psychology of her scenes, and the slipperiness of her surfaces. The attention the film lavishes on atmospheric details—the holding of a gaze a beat too long, the lingering caress of an arm, the pulling down of a hat—is not only for filmic effect; it also reflects the labors of racial passing itself, where maintaining a credible facade relies on painstaking attention to detail. Early in the film, for instance, Irene (played by Tessa Thompson) inadvertently passes in a downtown hotel; we experience her anxiety about the prospect of being found out as we witness her meticulous surveillance of her surroundings. So much rests on a curl being out of place, a smile unthinkingly unreturned, a sense someone is looking too hard for too long. The stakes of getting caught are high, running the gamut from the public shaming Irene risks in the hotel to the prospect that Clare and her child could be disowned or physically harmed by her racist white husband, should he learn her secret. Hall depicts the careful Irene navigating these stakes as both a strategic voyeur and someone vigilantly aware of her own appearance. Her chance meeting with Clare, a former childhood friend (played by Ruth Negga), disturbs Irene’s sense of propriety as she finds herself charmed by Clare’s boldness in working her body to achieve whatever effect she seeks.

Given the film’s sensitive approach to looking, Hall’s decision to shoot the film in black and white is not without risk. In the wrong hands, such a literal take on racial passing—a black-and-white film about characters moving between Blackness and whiteness—might prove flat-footed and gimmicky. But Hall wields the film’s color palette with surgical precision, using its muted hues to accentuate its overall tone of restrained turmoil. When Clare and Irene pass in the film, they are shot in saturating white light highlighting the charged efforts of their ruse, while in Harlem, they appear largely in shadow—a choice that reflects Irene’s more grounded life uptown, but also her growing paranoia that her husband, steadily portrayed by André Holland, is growing as enchanted with Clare as she. The film’s rich array of grays also gestures to the ambiguity of motives and events central to its atmosphere of uncertainty. Larsen’s novel famously had two endings, with its first printing offering more narrative closure in the wake of the novel’s dramatic conclusion, while its second printing—omitting the final paragraph—is more equivotating (and more satisfying). The film’s source material purposefully retreats from the surety of knowing and dwells instead in the complexities of perception’s failures, whether in relation to race or plot. Shooting in black and white visually conjures this noirish mood of unreliability while underscoring the pleasure Irene takes in Clare’s beautiful and dangerous surfaces.

The film’s color palette also helps mute the not-so-minor inconvenience that its two main performers, Tessa Thompson and Ruth Negga—mixed-race actresses who identify as Black and have been perceived by audiences as such in every other role they’ve played, to my knowledge—do not always convince as white-passing women. While this is somewhat distracting at first, we might more generatively frame the skepticism this casting elicits as a canny provocation on the director’s part. Audience members are forced to indulge in the same titillating hunt for racial evidence from Clare and Irene’s bodies as their beholders in the film—we remain hyperconscious of how they appear to us as well as to other characters. The effort of sharing this work of racial decoding with those on screen makes for a viewing experience that is both laborious and unsettling. So while Hall’s choice to film in black and white affords her a little more cover in helping viewers accept these actresses as white-passing, strategically oversaturating their features in some scenes while undersaturating them in others, it also makes us continually aware of the stylization race always entails.

While the film’s primary focus is racial passing, Hall also demonstrates how much this act is entwined with the reality of class and the performance of gender. Irene passes not only because of her physical features but because of the means she possesses to adorn them. Her darker-skinned maid, Zula, toils in the background for much of the film, freeing up Irene to further obsess about the dazzling Clare. As women, moreover, Clare and Irene both understand what it means to be gazed upon; Clare is treated like a toy by her overbearing husband (played with devious aggression by Alexander Skarsgård), while Irene struggles to maintain a facade of perfection even as the everyday brutalities of white supremacy wear down the rest of her family.

In an exchange between Irene and her husband in which they wonder why passers like Clare always seek to return to Blackness in some form or fashion, he pithily retorts, “If I knew that, I’d know what race is.” The brilliance of the film, extending from Larsen’s novel, comes from its willingness to robustly explore this question in all its complexities—what is race if it can so easily be upended, performed, put on and taken off for some, all while continuing to captivate, befuddle, and engine our desires and lives. Passing thoughtfully ponders the material and psychological life of race without flinching from the harsh realities of racism, a deathly force that casts an omnipresent shadow over the many dazzling modernist surfaces and spaces we gaze upon and move through in this stylish, studious period piece. We may never get to the bottom of what race is, the film suggests, but its inherent unknowability fails to blunt the consequences of our enduring obsession with it.

Adrienne Brown is an Associate Professor of English at the University of Chicago. She is the author of The Black Skyscraper: Architecture and the Perception of Race and co-editor with Valerie Smith of Race and Real Estate.