The Sabbath, an Island in Time, Under Attack

Finding solace in ritual after Poway and Pittsburgh. 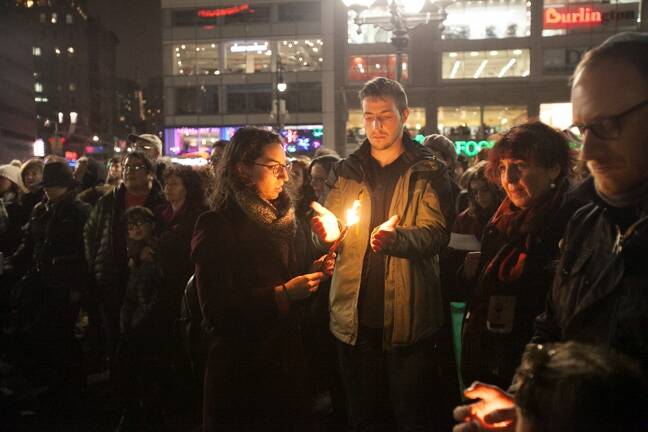 AS SHABBOS came to an end the week before last, my friends and I performed the havdallah ritual. Flame, spice, wine, song and brave words granted us the courage necessary to depart our sacred “island in time” for the messy continent of the mundane. But havdallah could not prepare us for the news coming out of Poway, California, echoing the horror exactly six months before in Pittsburgh. “There’s been another shooting,” my friend blurted, as she scrolled through her news feed, partaking in the very modern Saturday night ritual of logging back in to one’s devices to review the events of the past 24 hours. All the sweet slowness of Shabbos fled me in one bitter rush.

Tuning out once a week is an act of creative constraint. It yields “a seed of eternity,” a night and day filled with song, food, friends, rest, and love—a taste of the world as it should be. Yet there’s a helplessness in surrendering the sense of control we feel in being constantly tuned in to the news cycle. In a world that delivers one uppercut after another, it’s scary to let your guard down; who knows where the next punch might land.

Of course, there’s also a helplessness in being tuned in to tragedy, one that grew increasingly acute as more and more information rolled into my feed over the course of the week: details about the shooter and his white Christian nationalist manifesto; the hollow, cynical condemnations from President Trump; calls for Jewish communities across the country to bar their doors, hire armed guards, or move to Israel. Then there were the heroic stories of Lori Kaye, zeykher tsadikes l’vrokhe, and the pictures of her grieving family, zey tsu lange yorn.

It’s well-documented that continuous, unremitting exposure to stories of tragic violence can be traumatizing, leading not only to a state of persistent, heightened alarm, but to a sense of powerlessness and numb indifference. In other words, when we don’t take control over the ways we take in tragic information, it’s bad for our mental health. Perhaps counterintuitively, it also makes us less likely to take effective, responsive action. Self-help gurus advise that we set timed breaks from our devices in order to reconnect with our own sense of presence and feeling; bestselling Christian authors recommend the practice of regular Sabbath rest. I used to feel pretty smug about the fact that I’ve already been doing that once a week for my entire life, but after Pittsburgh and Poway I realized that disconnecting can also be a real liability.

Since the Pittsburgh shooting, a number of progressive groups, including Jews for Racial and Economic Justice, Bend the Arc, Jewish Voice for Peace, and Kavod House, have launched communal safety projects. Last week, following the Poway shooting, I participated in several organizing meetings aiming to think through ways for Jews to increase our security know-how, while building mutual protection with other groups, including Muslims, Sikhs, and Black Christians that are also targeted by white nationalists. We were determined and disciplined enough to move the work forward, but a pall hung over our meetings. I was too frightened and dispirited, or just too busy, to mourn. I knew it was unsustainable in the long-run to keep organizing from a place of numbness and fear, but I couldn’t find my way out. My heart sat in my chest like stone.

All week, I ached to mourn, so I could return to my humanity and fight from a place of love and connection. When Friday evening came around, though my mind was dull and tired, my feet led me to shul, as they always do.

We filled the room with songs of longing and greeting, from the pining thirst of Yedid Nefesh (“My soul is sick for your love/O please, o God, heal it”) to the the rousing invitation of L’cha Dodi (“Wake yourself, wake yourself!/ For your light has come. Arise, my light!/ Wake, wake, and utter song!”). Their lyrics have traveled to us from 16th century Safed and their melodies from 19th century Eastern Europe, placing us in a gorgeous web of Jewish cultures past, present, and future—that seed of eternity, expanding our hearts beyond the acute concerns of the previous week. The rabbi spoke movingly of the Omer period we are in right now, when we ritually mourn the deaths of Rabbi Akiva’s students from 2,000 years ago. The rabbi pointed out that we gain a sense of control through the stories we tell about that tragedy, and how we make meaning from them. And at the same time, we must confront the seemingly unstoppable violence of empire.

The rest of my Shabbos was filled with meals at home accompanied by friends and song. As the great Maimonides said, fulfilling the mitzvah of taking pleasure in Shabbos is its own reward. My senses, dulled by a week of worry, came to life as I ate one homemade dish after another. We mostly talked about other things besides the shooting: pieces of Torah, our jobs, our families, masculine socialization, shul gossip.

After dessert, we sang “Kah Ribon.” A 16th century liturgical poem written by Rabbi Yisrael Najara of Gaza, arguably the greatest poet of the Spanish expulsion, it is a redemption song, riffing off the biblical story of the exiled hero Daniel. Our voices soared together: perok yas anach mipum aryavasa (“save Your flock from the mouths of lions”). In the stillness afterward, for the first time since Poway, tears finally came to me. We sat together a little while in silence, thinking our own thoughts. “I’m just so sad about it,” I said to my friends. “Our people are so beautiful. I don’t know what to say other than I’m glad I’m here right now, with you.”

It’s no coincidence that the Pittsburgh and Poway attacks happened on Shabbos, when those of us who go to synagogue are most visibly and vulnerably together. In the best version of ourselves, we assert our place in a tradition, and in a shared humanity that crosses state borders; we mourn with an open heart and celebrate with an open hand. In addition to our bodies, it is this very way of being together that is under attack right now by white Christian terrorists, who regard our communities as the stuff of conspiracies, and our peoplehood as a threat to white power.

We now dwell within the terrible irony, as so many Jewish communities have before us, that the very source of our love, connection, and inspiration is becoming a site of vulnerability, fear, and violence. I refuse to turn away. If I lost Shabbos, I wouldn’t know any longer what I love, what I’m fighting for in the week ahead. I just wouldn’t be me.

Jonah S. Boyarin is a writer, anti-racist educator, Yiddish translator, and born-and-raised New Yorker. The Jewish Week named him one of 2020’s “36 Under 36.”