Jews are understandably anxious, but the main threat is toward pro-Palestine activists. 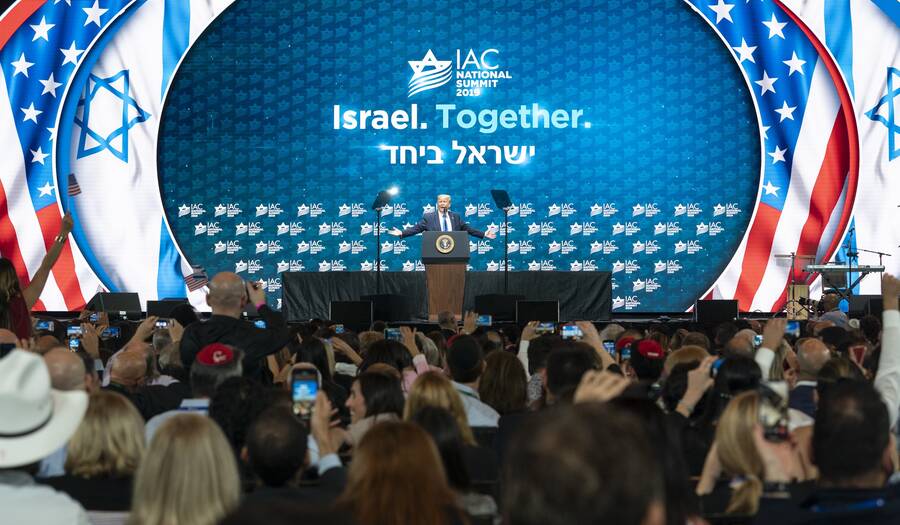 THE EXECUTIVE ORDER Donald Trump signed yesterday, purportedly intended to combat antisemitism, can only be understood in the context of a few key facts. The first is that the Trump administration is actively pursuing a post-two-state solution in Israel/Palestine, laying the groundwork for Israel’s eventual annexation of all or parts of the occupied West Bank. The second is that, as a result of more than half a century of military rule over the Palestinian territories, Israel continues to face challenges to its legitimacy, especially in the form of the growing Boycott, Divestment, and Sanctions (BDS) movement on college campuses in the United States and around the world. The third is that, despite Trump’s numerous antisemitic comments and his administration’s general coziness with white nationalists, right-wing supporters of Israel have found in him a useful vessel for realizing their territorial-maximalist aims.

Against this backdrop, the Trump administration, with the approval not only of the Jewish right but of ostensibly broad-tent organizations like the Anti-Defamation League, has issued a reworking of the US government’s definition of antisemitism. Wednesday’s executive order not only formally extends Title VI anti-discrimination protections on the basis of “race, color, or nationality” to Jews (without specificying to which of these categories Jews belong); it also further codifies the dangerous and false equivalence of anti-Zionism with antisemitism and designates criticisms of Israel as forms of anti-Jewish discrimination, by affirming the controversial International Holocaust Remembrance Alliance definition of antisemitism already in use by the State Department. The unambiguous intention of the order, as Jared Kushner himself wrote yesterday in the New York Times, is to crack down on Palestine solidarity and anti-occupation activists on campus, and on the BDS movement in particular. Under the guise of protecting Jewish students, the order also poses a clear threat to the First Amendment rights of educational institutions: if you criticize Israel, or even allow a platform for criticism of Israel, you risk losing federal funding.

The day before Trump signed the order, a New York Times report that the president was poised to define Judaism as a nationality provoked an outburst of fear and trepidation from many American Jews on Twitter. Though this response might seem overblown in retrospect, it makes sense that the first reactions to the report were visceral. It has been barely more than a year since the shooting at the Tree of Life synagogue in Pittsburgh—a year that has seen a spike in violent antisemitism worldwide. And as he has periodically done since taking office, Trump in recent days has been flagrantly employing old antisemitic tropes, increasing American Jews’ anxieties about Jewish difference and Jewish visibility in US politics.

Just last weekend, he told a predominantly Jewish audience at the Israeli-American Council’s conference in Florida, “A lot of you are in the real estate business because I know you very well. You’re brutal killers. Not nice people at all. But you have to vote for me; you have no choice. You’re not going to vote for Pocahontas [the president’s racist nickname for Elizabeth Warren], I can tell you that. You’re not going to vote for the wealth tax.” Although the crowd of Trump supporters—who constitute a small minority of the American Jewish population—vigorously applauded in response, most American Jews rightly recoiled from the leader of the world’s most powerful country loudly broadcasting crude anti-Jewish stereotypes.

The draft text of the executive order released on Wednesday turned out to be less dramatic than many feared: it contained no explicit redefinition of Judaism as exclusively a nationality; this was not a first step toward stripping American Jews of our citizenship. It is still the case, however, that the very notion that had provoked such outrage from many American Jews—not simply that Jews are a nation, but that the national home of all American Jews is in the Middle East, where most of us have never lived—remains implicit in the document’s interpretation of antisemitism: if you oppose Israel’s existence as an ethnostate, you’re violating American Jews’ civil rights.

But to focus on what this means for American Jews is to miss what the executive order is meant to do. American Jews are not the order’s target: Palestine solidarity and anti-occupation activists are. Indeed, instead of protecting Jewish students, the Trump administration is using them as a cudgel to silence their peers who criticize Israel—many of whom are Palestinians, Muslims, Arabs, and students of color, who are often themselves victims of state-sponsored forms of discrimination and surveillance. The order makes a mockery of anti-discrimination law, laying the ground for the absurd yet all-too-imaginable scenario in which a granddaughter of a Palestinian refugee expelled from the Galilee in 1948 is held to have violated a fourth-generation American Jew’s civil rights for claiming that “the existence of the State of Israel is a racist endeavor”—one of the IHRA’s specific examples of antisemitism.

As Lara Friedman, the president of the Foundation for Middle East Peace, has pointed out, the executive order is the culmination of several years of pressure by pro-Israel advocacy organizations. With Trump’s appointment of Kenneth Marcus, a veteran right-wing pro-Israel operative, to the post of assistant secretary of civil rights at the Department of Education, it was only a matter of time before an executive order of this kind came across the president’s desk. Marcus has written publicly about the need to use civil rights litigation to crush campus criticism of Israel. Now that position is US government policy. The Department of Education’s demand in September that the Duke-UNC Consortium for Middle East Studies revamp its curriculum or face defunding, in response to a conference the consortium hosted that featured criticism of Israeli policies toward Gaza, is almost certainly an indication of what’s to come.

The 24 hours of whiplash and confusion around Trump’s executive order are on one level emblematic of how half-complete reports sow fear and misunderstanding as outrage whirls through social networks. But they also reflect the fracturing consensus within the Jewish community around antisemitism and Zionism and the paradoxes of Jewish visibility and vulnerability. Never before have American Jews been so identified with an odious, oppressive administration—one most of us firmly oppose—and never before have we been so vulnerable to anti-Jewish violence in the country where we’ve lived for centuries.

If there is any upside to this executive order, it is that American Jews have been brought into a more direct confrontation with political Zionism’s core assumptions: that Jews living outside of Israel are essentially foreigners in the countries where we live; that this condition of foreignness, of diaspora, is one of physical and spiritual abjectness that should be ended; and that the way to end the abjectness of the diasporic condition is to territorialize the Jewish people, to root us in a faraway nation-state.

Sadly, these are the assumptions of the Jewish right, which not only risks endangering Jews of all political persuasions, but also seeks to crush the nonviolent movement to end Palestinian subjugation.