The Price of Living Together 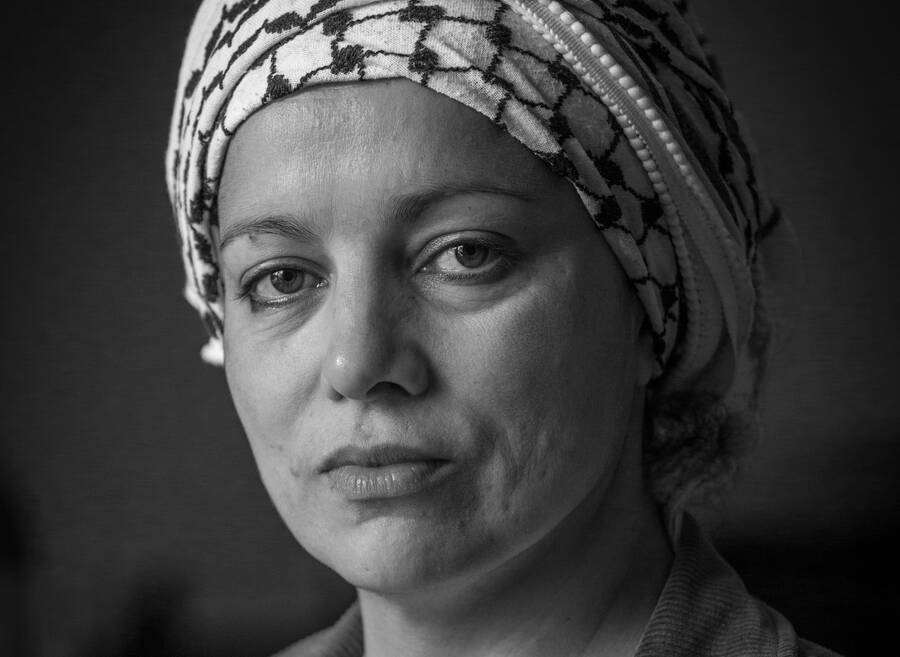 Houria Bouteldja is a French Algerian decolonial activist, writer, and founder of “The Indigenous of the Republic,” an anti-racist political party in France. Her book Whites, Jews and Us: Towards a Politics of Revolutionary Love is both an analysis of Arab–Jewish relations as well as a decolonial manifesto. It directly calls upon Jews to give up the privileges currently granted to them by white nation-states and to join people of color in the struggle against colonialism. The book sparked significant controversy on the French left, with critics accusing Bouteldja of “racist anti-racism.” A group of intellectuals came to her defense, publishing an open letter that argued that “the violence of the attacks with her in their sights is also aimed against political anti-racism as a whole, which is to say any attempt to organise and fight to put an end to oppression.”

Isabel Frey: Could you tell us a bit about your personal background and how it led you into decolonial activism?

Houria Bouteldja: I grew up in France, but I’m from an Algerian background. My parents were immigrants—labor immigrants. France is a racist country: we are discriminated against as Arabs, as black people, as Roma people, and as Muslims. After 9/11 we decided to organize ourselves, and we have existed ever since as a decolonial political party. What that means is that we are disappointed by the left, in particular the white left, because they are not effective at combating racism and Islamophobia. Sometimes they are even Islamophobic themselves. Therefore, we decided to organize outside the left. We fight the extreme right, but in a certain way, [we also fight] the left, even though we have allies there. One could say that we have a conflictual relation with the left.

IF: Your book is called Whites, Jews, and Us: Towards a Politics of Revolutionary Love. Could you explain what you mean by “politics of revolutionary love”?

HB: It means that war between us [black and white people] in a system of racism is not inevitable. We can go beyond it, but we have to pay a price; it’s not easy. Racism is a question of hierarchy and privileges. The people who have the privileges—white people—don’t want to get rid of their privileges, they want to maintain them. If you, as a white person, decide to abandon your privileges, you lose a lot of things, but this is the price for revolutionary love. This is the price for living all together.

IF: You are a French Algerian Muslim woman, and yet in your book you describe yourself as “white.” Why? What makes someone white?

HB: Whiteness for me is [about] a relationship to power, not a question of skin color. Inside the nation-state, I experience racism because I’m at the bottom in relation to white people. I’m discriminated against and not treated as a legitimate citizen. At the same time, I have privileges living in the Global North; in relation to the Global South, I’m white. Compared with the migrants who are dying in the Mediterranean Sea, I am very privileged: I have a passport that enables me to travel. I have rights in France. I have a salary. In that sense, I am “whitened.”

IF: In one of the chapters of your book you address “we, indigenous women.” How does gender fit into your analysis of race and decolonization? What does a decolonial feminism look like?

HB: Racism transforms gender relations too. From a decolonial perspective, racialized men are not the same as white men, because the gender of the racialized man is also oppressed. All women are oppressed by patriarchy, but men of color are oppressed by the white patriarchy too. Here, there is a dialectic relationship between men and women of color. When feminists say “our main enemy is men,” there is some truth to it and I can understand it. But in our situation, as women of color, this is not the case; our enemy is the white man. It is difficult for us as women to say we have to fight men of color, even if they are violent. We recognize that they are violent, but we also recognize that they are becoming violent because they are oppressed by the state. They are being killed by police, they make up the majority in prisons—they don’t have any power. And so they become violent, and this violence is directed towards women of color.

HB: I don’t think we can separate antisemitism and Islamophobia from each other, as they both emerge from state racism and the history of imperialism. On the other hand, the state does not behave the same towards Muslims and Jews. In France, for example, only the Muslims, the Roma, and black people are targeted by the police—not the Jews. At the same time, there is both a rise in extreme-right antisemitism and in a kind of “Judeophobia” in Muslim and black communities. This puts the Jewish community in a delicate situation. The state targets black people, Arabs, Muslims, and Roma, while the extreme right targets Jews, as well as all the others. In France, the Jewish community has gone through a political shift. In the past, they were leaning more towards the extreme left; they were revolutionaries. But now many of them, although not all of them, are shifting towards the right. So here the Jewish community has to make a choice, and I think if you choose the right, you choose your own oppression.

IF: The talk you gave was titled “The rise of antisemitism in France, the responsibility of the left philosemite.” What do you mean by philosemitism?

HB: Philosemitism is a new kind of antisemitism. In many European countries there is something like a “state philosemitism.” This means that the state wants to integrate the Jews into the national project, even though they will never be as white as the real white people. By “loving Jews” as a collective, the nation-state maintains itself as a white state. Additionally, the state says that it wants to protect the Jews, while simultaneously discriminating against migrants, Muslims, and black people. This is a way to provoke competition between racialized people.

If, after World War II, the Jewish community would have truly become a part of France, then I would believe that there is no more antisemitism. But in contemporary France the Jews are not white at all. The French state still behaves as if the Jews are a kind of exterior community; they are not real French. The real French are the Christians. Jews are treated as foreigners, even though many of them have lived in France for 1,000 or 2,000 years. The fact that the elites of France think that Israel is the real country of the Jews means that they don’t think they are French.

IF: One reason for this conflictual relationship between Islamophobia and antisemitism is that there is also a rise in Muslim antisemitism and Jewish Islamophobia. How do you understand these developments?

HB: When talking about the feelings of the Muslim community towards the Jews, I prefer not to use the term antisemitism, but a new kind of “Judeophobia.” For me, antisemitism is directly linked to European antisemitism and to Nazism. I think that there is an explanation for the Judeophobia of the Muslim community, just as there is another explanation for the Islamophobia of the Jews. I prefer to use another word to point out that difference.

Today there definitely is Judeophobia in the Muslim community, but it is born in colonialism. Take Algeria for example: During colonialism, Algerian Jews were made French, even though they were indigenous people. They were from Algeria, ethnically Arab or Berber. The French colonial regime gave them French citizenship as a method of dividing the people. And when the Jews became French, they chose colonialism and opposed independence. This is a historical explanation for the Judeophobia of Algerian Muslims. That would be the first explanation—understanding the colonial division between Jews and Muslims in the Maghreb.

The second explanation is the creation of the State of Israel. And the third explanation is the competition that is organized inside the French state between Muslims and Jews. The state grants privileges to the Jews in France, which makes the Muslims jealous and provokes a spirit of conspiracy: “Why are the Jews so privileged? Look, the Jews control everything.” It seems as if the Jews have a lot of power, but this is a manipulation of the state. We are currently in a phase in which the philosemitic state is protecting the Jews. I don’t know when, but I think this will change soon, and they will not be protected anymore.

IF: To me it seems that in many European countries philosemitism is especially strong because of the remembrance culture of the Holocaust, as well as a form of “Holocaust guilt.” Do you have any thoughts on that?

HB: I have to be honest, I don’t believe in this guilt. I think they say that they feel guilty, but I’m not sure at all whether that is true. This is merely a discourse. The reality is more a question of interests. I think that the geopolitical role of Israel is very important in the West. And I think it’s important for European states to [keep] the Jewish community complicit in all that.

IF: What possibilities do you see for Muslim–Jewish solidarity in today’s world?

HB: It’s a question of politics. In our decolonial circles we work with Jews as well as with white people, and that works because we share the same political vision. So it is possible, politically speaking, but it is a fight. We have to convince people to join us.

Earlier I said that I was white because of my privileges; the same is true for the Jews. But the Jews are even whiter than me, because they have even more privileges. The problem is that people who have privileges don’t want to get rid of them. So our question is: what can we offer the Jews that is better than whiteness? What is better than whiteness? It’s very difficult. We have the same problem in our communities: we have a lot of people who want to be integrated into the system. When I recognize my whiteness, it’s to get rid of it. I don’t want to become whiter than I am now. But the majority of racialized people want to be white.

I think Jews are also racialized people, but they are not on the same level as the others. Black people, Muslims, and migrants are at the bottom, Jews in the middle, and white people on top. Within the framework of integration, all nonwhite people want to become white. But we have to recognize that this is not possible in a racialized state. This analysis forms the basis of our decolonial political project: we have to mobilize all together, including the Jews, to fight the nation-state.

Isabel Frey is a PhD candidate in ethnomusicology at the University of Music and Performing Arts Vienna, a Yiddish singer, and a Jewish social-justice activist based in Vienna, Austria.

Conversation
When “Antifa” Is the Enemy
A new group calling itself “Jewish-Israeli Dissent” is challenging the German left’s unbridled support for Israeli government policies.
Isabel Frey
Sign up for our email newsletter, featuring exclusive original content
Short on time?
Sign up for our weekly Monday roundup of everything you missed in Jewish Currents last week.