For the new standard bearer of the French far right, Jewish identity provides cover for Islamophobia, racism, and antisemitism. 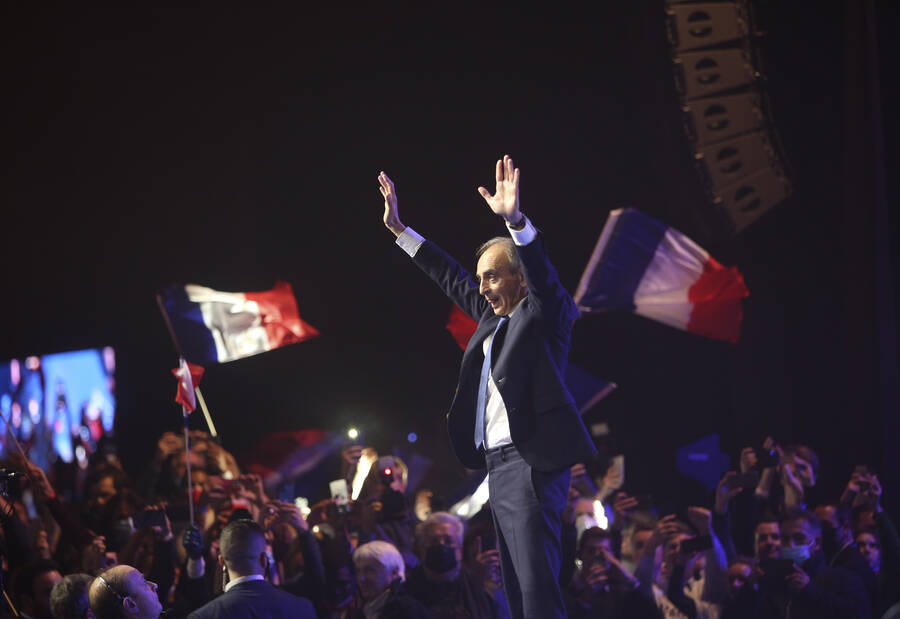 This fall, France’s political world has been turned upside down by the entry into the race of the far-right polemicist Éric Zemmour. Before officially declaring his candidacy on November 30th, he spent months touring all corners of France, spreading his racist, anti-immigrant message. He has defined rap music as “a subculture for illiterate people” and called unaccompanied immigrant minors “thieves,” “murderers,” and “rapists” who “don’t belong here.” A political novice with no party behind him, he rose from 3% to 17% in presidential polls in the space of just a few months, at times surpassing the former standard bearer of the far right, Marine Le Pen of the Rassemblement National. Though his poll numbers have slipped recently, there remains a possibility that he could be President Emmanuel Macron’s opponent next spring.

Until this year, Zemmour was not a politician, but a best-selling author of jeremiads lamenting the state of France, a writer for the right-wing newspaper Le Figaro, and a regular on France’s many political talk shows on both radio and television. Zemmour’s beliefs are typical of far-right figures around the world: He’s a misogynist whose first major book, Le Premier Sexe, was an all-out attack on feminism. He is also a racist and an Islamophobe who argues that France is engaged in a “civil war” with its non-white citizens, and has claimed that all Muslims believe that jihadists are “good Muslims.” He has been investigated for inciting racial hatred—a crime in France—16 times, and has been convicted twice: once in 2011 for asserting on TV that employers have the right not to hire Black and Arab candidates, and that “most drug dealers are Blacks and Arabs,” and once for his 2016 remark that Muslims must be made to choose between Islam and France. (He is currently on trial for hate speech again over his comments on unaccompanied minors.) He has criticized Muslims for not giving their children “French” names, a practice he intends to declare illegal should he become president, and advocated for denying individuals—that is, Arabs—the right to transfer funds to their families in the Maghreb. This latter proposition has been picked up by other candidates, including not only Le Pen but also the left-wing nationalist Arnaud Montebourg.

If Zemmour’s rhetoric is not unfamiliar, he is still unusual among ascendant right-wing leaders: He is a Jew who attended Jewish schools, from an observant Algerian Berber family. This makes his rise a surprising event in a nation where Jews were long the objects of ferocious racial hatred, culminating in the Vichy government of World War II, which first deprived French Jews of their rights and then collaborated with the Germans in deporting them to their deaths.

To understand his success, it is necessary to take account of the way Zemmour talks about Jewishness. He argues that French Jews are Jews at home and French in public, having no special rights, requirements, or protections to set them apart from other citizens. This vision of Jewish assimilation dates back to the French Revolution, when the Jews of France were the first in Europe to be emancipated, or given equal rights with gentiles. Zemmour references this history explicitly. In a televised debate with the philosopher Bernard-Henri Lévy, he defined his notion of Jewishness by quoting from a 1789 speech on emancipation: “Everything must be refused the Jews as a nation; everything must be granted them as individuals.” In Zemmour’s mind, for a minority group to stake out a special place in French politics, society, or law would mean that its members were negating their Frenchness—and Frenchness, in Zemmour’s eyes, is the most important of values.

The same opposition to any form of particularism underpins Zemmour’s Islamophobia and racism. His vision of France is consistent with the long-held view of the republic as one and indivisible. This means that no regional separatism is acceptable, and that no segment of the population is permitted any interests separate from those of the nation. Jews are not alone in being denied any special place: They are joined by women, and by all sexual and racial minorities. Under this way of thinking, the country’s Muslims, by refusing to assimilate entirely to French ways—demonstrated by their failure to give their children “French” names, or to abandon aspects of religious observance that visibly convey difference, such as the wearing of the hijab—have proven that they have no place in the nation as conceived by Zemmour and his ilk. Like the Jews in the language of France’s 19th and early-20th century antisemites, today’s French Muslims are, for the right, not just unassimilated, but unassimilable. Zemmour’s enormous popularity shows that he is not alone in feeling that they have no place in the country. And, crucially for his campaign, he may have more latitude to say so than his competitors. As much as Zemmour insists that his Jewishness does not set him apart, in reality, being a Jew provides him political cover. He not only argues that total assimilation into French society is required of all who live in France, but implicitly holds his own life up as proof that such assimilation into the most fundamentalist forms of nationalism is possible.

Zemmour’s Jewishness has also helped neutralize claims that the French far right is antisemitic. But if Zemmour is not a Jewish antisemite, how can his outrageous remarks be explained? In his most popular book—the best-selling Le Suicide Français (2014), which recasts history to show that immigrants and the left have knowingly worked to destroy the nation—he also includes statements about France’s treatment of its Jews that run counter to the facts. Zemmour famously wrote, and continues to maintain, that far from collaborating in the extermination of France’s Jews, the government, headed by World War I hero Philippe Pétain, actually defended them. (This is only one of his many efforts to rewrite France’s history of antisemitism: He also claims that the French army was justified in suspecting Captain Alfred Dreyfus of espionage, since he was “German”—though in fact Dreyfus was a native of Alsace whose family chose France when Alsace was annexed by Germany after the Franco-Prussian War of 1870.)

In addition to his historical revisionism, Zemmour is also opposed to the extensive teaching of the Holocaust that he says takes place in French schools; he argues that the Holocaust was not a major event of the war. Likewise, he denounces laws defending the memory of the Holocaust, and criticizes then-president Jacques Chirac’s 1995 recognition of France’s responsibility in the rounding up of French Jews, arguing that it was unjustified, aimed solely at inspiring guilt in a nation that was itself a victim of the Nazis. In his latest book, La France N’a Pas Dit Son Dernier Mot (France Hasn’t Said Its Last Word), he goes so far as to claim that the Jews killed in a terrorist attack on a Jewish school in March 2012 in Toulouse were “above all foreigners” because they chose to be buried in Israel. His remarks on Jewish matters have raised hackles among many prominent French Jews, most notably Lévy, who has accused Zemmour of fascism, and former government minister Jacques Attali, who has called him an antisemite. But any other politician who made statements like these would have been condemned much more broadly for antisemitism. This is indeed what occurred in 1987, when now-former National Front leader Jean-Marie Le Pen dismissed the Holocaust as a “point de detail” of World War II.

The failure in many quarters to recognize and name Zemmour’s antisemitism has allowed him to freely disseminate his repugnant views. Indeed, there are disturbing signs that Zemmour has awakened instincts the French left seemed to have abandoned after the Dreyfus Affair. In October, Jean-Luc Mélenchon, founder and leader of the leftist party La France Insoumise, committed a significant gaffe on the French channel BFMTV when he attempted to explain Zemmor’s ideas as “traditions closely tied to Judaism,” claiming that he “reproduces many of [Judaism’s] cultural scenarios,” which are “that one changes nothing in traditions.” By misunderstanding the origins of Zemmour’s ideas—which are French to the core—as distinctively Jewish, Mélenchon assigns Judaism a reactionary, even racist role. He thus inverts the classical antisemitism of the right, which views Jews as the motor of modernity, presenting the Jew as an obstacle to modernity instead. This formulation, no less deplorable than its inverse, shows that in taking advantage of frightening fault lines in French society, Zemmour has normalized a virulent racism that France had previously disguised.

Miguel Lago is the executive director of the Institute for Health Policy Studies and teaches at the School of International and Public Affairs at Columbia University and at The Paris Institute of Political Studies.

Newsletter
The Power and Limits of Israeli Dissident Cinema
The Other Israel Film Festival highlights state violence past and present, but can films funded by the government ever truly hold it to account?
Mitchell Abidor
Review
World With No Escape
In his final novel, Last Times, Victor Serge achieved the ethical vision that sometimes eluded him in life.
Mitchell Abidor
Sign up for our email newsletter, featuring exclusive original content
Want original reporting and analysis on Israel/Palestine?
Sign up for the Tuesday News Bulletin.