The Myth of Rabin the Peacemaker

The Oslo Accords were not derailed by his death; they achieved exactly what Rabin wanted. 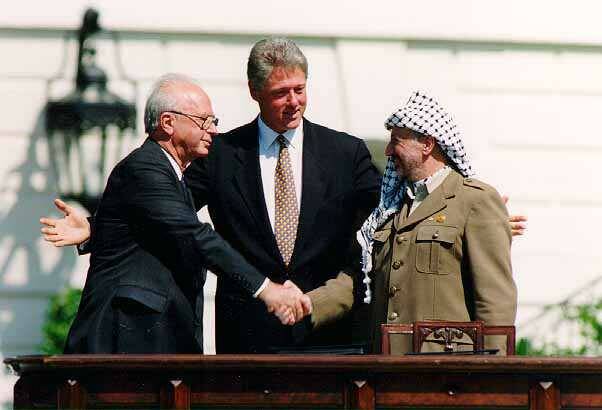 This article first appeared in +972 Magazine.

ALEXANDRIA OCASIO-CORTEZ was right to cancel her participation in an event honoring Israeli prime minister Yitzhak Rabin. After news broke that the Congresswoman was scheduled to speak at a memorial organized by Americans for Peace Now in late October, Palestinians and their allies shared historical archives and family stories on social media to explain why Rabin, who was assassinated by an Israeli right-wing extremist 25 years ago, was no man of peace.

In many ways, the saga is a tiny footnote in the story of American progressives’ shifting politics on Israel. But the response of Palestinian rights activists, and Ocasio-Cortez’s heeding of their voices, does mark a significant moment in that story. Despite pushback, Palestine advocates are setting the record straight about one of the conflict’s most harmful myths: that the Oslo Accords—and by association, Yitzhak Rabin—was a force for peace.

During the debate over AOC’s event, some commentators fairly pointed out that Rabin’s legacy was more complex than others were letting on. Rabin’s decision to stake his career on negotiations with the Palestine Liberation Organization—once an unthinkable prospect for most Israelis—was indeed daring. His outreach to Palestinian citizens of Israel to help him keep a government mandate and advance the accords was unprecedented; many Palestinian citizens supported the peace process and even mourned Rabin’s death. Moreover, Palestinian leaders were no less tainted by crimes that they had ordered or committed (though they, too, were capable of change).

These nuances, however, do not compensate for the fundamental problem with the way Rabin is revered in Israel and abroad. His persona as a “warrior-turned-peacemaker” is almost exclusively centered on the final four years of his life, five decades of which were defined by hawkish and militaristic views (Shimon Peres, Rabin’s rival-turned-ally, eventually received the same idolizing treatment). This cult of personality, dotingly crafted by the Zionist left in Israel and liberal Zionists in the United States, has particularly relied on a counterfactual argument: that had he not been killed, Rabin might have helped to bring about a two-state solution.

Ironically, the first person to dispute that narrative may have been Rabin himself. The words “Palestinian state” do not appear in the accords he signed, a fact that he and other Israeli officials were careful to ensure. A month before his assassination, Rabin told the Knesset that his vision was to give Palestinians “an entity which is less than a state”—a precedent to the “state-minus” advocated today by Netanyahu and outlined in Trump’s “Deal of the Century.” Rabin also insisted that the Jordan Valley would remain Israel’s “security border”—the very plan that drew international outcry this year, when Netanyahu pledged to formally annex the area.

If Rabin’s words were simply politicking with Israeli voters, then his government’s actions spoke more clearly. From 1993 to 1995, according to Peace Now, Israel initiated the construction over 6,400 housing units in settlements. In that time, according to B’Tselem, Israel also demolished at least 328 Palestinian homes and structures—including in East Jerusalem, which Rabin sought to keep “united” under Israeli sovereignty. The result was that Israel’s settler population rose by 20,000, and Palestinians were displaced in the thousands, while Rabin sat at the negotiating table.

All the while, Rabin’s government used Oslo not as a blueprint to end the occupation, but to restructure it and minimize the cost to Israelis. The burden of controlling the occupied population was transferred to the newly created Palestinian Authority, which quelled nonviolent resistance and targeted armed militants on Israel’s behalf. The Paris Protocol, which effectively held the Palestinian economy and their resources hostage to Israeli discretion, further cemented the economic exploitation of Palestinians. These systems are still in place today, two decades after Oslo’s expiration date.

GIVEN THE ALMOST SACROSANCT association of Rabin with the peace process, many people easily forget that he was not even the one who initiated it. It was Yasser Arafat, the PLO chairman, who made the first overtures for negotiations as far back as 1973 (and which were dismissed for years by Israel and the United States). Arafat staked his leadership—and the unity of the Palestinian national movement—on the pursuit of a state on a fraction of historic Palestine. And it was he who pushed the PLO into recognizing Israel in 1988, five years before Oslo was even signed; no Israeli leader, including Rabin, has ever recognized a State of Palestine.

Yet Arafat does not deserve a hero’s legacy, either. His authoritarian shift undermined local Palestinian resistance and broke the PLO’s tradition of debate and consensus-building. His obsessive pursuit of American patronage and consent to Oslo’s debilitating conditions effectively sold out the people he was meant to represent. His condoning of the wanton violence of the Second Intifada irreparably scarred both Palestinian and Israeli society. As instrumental as he was to the Palestinian struggle, Arafat was also a key cause of its unravelling.

It is true that many Palestinians, like Israelis, were cautiously optimistic about Oslo. But as critics like Edward Said warned, the accords were always an illusion. As the occupation became entrenched, Rabin’s death turned into a convenient tool for liberal Zionists to maintain that illusion, using counterfactuals to justify the two-state paradigm when the evidence on the ground proved otherwise. The result, as next month’s memorial event shows, is that many have yet to reckon with an important truth: Oslo was never derailed by Rabin’s death—it achieved exactly what Rabin had set out to do.

More importantly, the myths around Rabin have distracted from his most egregious fault: his belief in Jewish supremacy in Palestine, and his will to commit atrocities to pursue it. It is why, as a commander in the 1948 war, Rabin signed the order to expel over 50,000 Palestinians in the notorious “Lydd Death March.” It is why, in his first stint as prime minister in the 1970s, he did little to curb the nascent settlement enterprise in spite of his dislike of the movement. And it is why, when faced with Palestinian civil disobedience in the First Intifada, then-Defense Minister Rabin gave the army a simple doctrine: “break their bones.” When that failed to pacify the Palestinians, he had no choice but to change strategy. Oslo eventually became Rabin’s final contribution to the Zionist cause: a cloak of “peace” to disguise the next stage of colonial rule.

Amjad Iraqi is an editor and writer at +972 Magazine and a policy analyst at Al-Shabaka.