The Language of Displacement

Mexican author Myriam Moscona talks about building a legacy for Ladino in the world.

Alejandro Meter and Myriam Moscona Translated from the Spanish by Jen Hofer
December 4, 2018 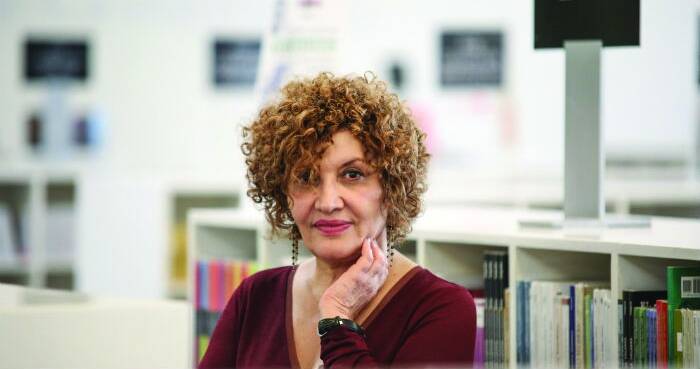 To read an excerpt from the novel Tela de Sevoya, click here.

A version of this interview was published in Spanish in Hispámerica: Revista de literatura, No. 133.

Alejandro Meter: After your remarkable career as a poet, what moved you to write fiction? Do you think your novel is in dialogue with your poetic work?

Myriam Moscona: Initially this book was a poetry project that transformed, to my absolute surprise, into a narrative work. I’d never written a creative piece in prose and I’d always thought it wouldn’t interest me much to try. It’s been so long since my first book of poetry that I’m now able to look back with some perspective. The themes appear from the very first moment, but that isn’t what’s most relevant; rather, it’s an idea of displacement that has animated my work. I get bored always doing the same thing. On top of that, I have no interest in purity or fidelity to a genre or a tone or a single channel of exploration. I’m not careful. I think that maintaining one foot outside the tradition we belong to is a good thing. And even if it weren’t, I’d do that regardless. That impulse arises from a restlessness within me that’s manifested in many ways over the years. All digressions eventually become a different peephole through which to glimpse that displacement I’m talking about. Displacement has marked my destiny: family displacement and also creative displacement. Imagine, how could you not love Judeo-Spanish (which had not appeared in my previous work): a language made from geographic, linguistic, and family displacements . . .

AM: What was the process of writing Tela de sevoya? Was it a cathartic experience? I’m thinking of what Cortázar once said with respect to his book Rayuela, when he noted that if he hadn’t written it he probably “would have thrown himself into the Seine.”

MM: No, I don’t think I would have finished myself off, but I do realize that Tela de sevoya contains, as if a kind of seed, something I’d been seeking in my other attempts. And I’m still seeking it. What I find is never definitive—that would be a pretension and an idiocy. That’s how you get writers who shout “Eureka!” after finishing a work. Not even Proust, after that creative insanity, thought that about his Recherche . . . catharsis consists in getting out from under something that’s been there constantly, buzzing around irksomely in your ear. And, when you do that, there’s a certain state of emptying that almost immediately initiates another disturbance. If it were any other way, it wouldn’t be possible to keep writing.

AM: In his book Moses and Monotheism, Freud mentions a period of latency, that is, a particular period of time that has to pass in order for a person to recover certain memories. How much time has it taken you to be able to capture some of those memories to be able to convert them into literature?

MM: If I were to respond that it took me the whole time I’ve been alive I’d sound overblown, right? Better to respond with something I wrote when this was just a proposal, or rather, a proposal of writing something in Ladino, long before I suspected that what would end up being written would be a narrative book:

The debt I have with my heritage becomes a declaration of love for what I’ve lost, as if what I have between my hands might be the possibility of reconstructing something that slumbers beneath forgetting, and to rouse it would be scary. I’ve taken a long time to revive this thing which was inside me, prior even to the presence of words, those words where I find pleasure, shelter, and a form of slippage that I wasn’t aware of during the years when I merely passed over them with fear, but also with the tremendous desire, deep inside, to touch them.

Sometimes we carry within us a larva that is there almost in a lethargic state, and it takes us years to recognize it, and then more years to want to or be able to wake it.

AM: Speaking of the importance of historical memory and the recuperation of a past that can reconcile a long family history of migrations and exiles, how do you experience this intersection in your writing?

MM: A language is historical memory. Sometimes it preserves information and turns of phrase that people have forgotten, but the language doesn’t forget. In the case of the Sephardic community, language served as a binding agent that linked men and women across faraway geographies, carrying those words like an unconscious and pleasurable way of remaining united. Many Sephardic families would talk about the key of Toledo—the key they would use to lock up their houses when they were expelled from Spain. My maternal grandmother used to refer to that key she inherited from her grandparents, which they had inherited from their faraway ancestors. I don’t know whether the story of the key of Toledo is a fiction, because, oddly, it appeared in 19th century documents, but not before then. Regardless, that emblematic key fulfills a function among those migrations and displacements. At a metaphorical level, as well (and I’m speaking here of my own writing), it plays a fundamental role, as it’s able to recuperate a combination of words that carry me, every day, toward a deeper connection with my own language, and on the other hand, with my family history. Identities can be an obstacle and a source of conflict between people and nations when they are erroneously carried like a flag. But it’s a different story when we recognize that nothing makes us better as beings in the world than our differences.

AM: I’m curious about the great number of allusions to photography, from elements that are purely technical to others that are perhaps more theoretical. What’s the reason for that? What role does photography play in your text?

MM: Your observation is astute. There are a number of scenes where photographs reveal knowledge to the lyric voice. One of the sections that repeats throughout the text is called “Focal Length,” which as you know is a term from photography. Based on how a photograph is taken, we can place an object in the foreground, or we can sweep past it so other objects stand out. Your current moment might embody a certain depth of field with respect to something or someone. And surely, that will not coincide with the impression you have, years later, about the same situation. The section of my novel called “Focal Length” groups together texts related to that which stands out in the foreground of our memories, or that which forgetting barely allows us to make out.

AM: From the time the first edition was published in Mexico, the novel has been very well received by critics, and was awarded the Villaurrutia Prize, one of the most important literary awards on the continent. What is your feeling and your experience of all that recognition?

MM: Perhaps because my literary past is in poetry—which has many fewer readers—I continue to be surprised by people’s reactions (more so than by critics’). There hasn’t been a single week that I haven’t received a new testimony from a reader. Of course that’s heartwarming. Once, when my text was still in process, I read a small fragment to my brother. It had to do with a biographical moment where he was the protagonist. He was definitely excited, but he said, “I love it, but I don’t think anyone will care about this story of a radio I gave you as a gift in our childhood and a language that no one speaks anymore.” To take revenge for his comment, once in a while I’ll send him an email with the testimony of some person I don’t know and I’ll say to him, “See? They did care.” I once heard a colleague say that a writer’s obligation is to write at least one good book. And sometimes, when I’m feeling immodest, I think that now I won’t go to writer hell. Later, of course, I torture myself thinking that perhaps I’m like “the donkey who played the flute” . . .

AM: Given that this is a novel written in Spanish but also in Ladino or Judeo-Spanish, do you think that Tela de sevoya constitutes a sort of struggle against forgetting, in terms of Sephardic culture and experience in the Americas? How would you describe the state of the language in the present moment? Does Ladino have a future, both in popular usage and in literature?

MM: Ladino is a unique cultural and linguistic phenomenon. I think that well beyond the question of community belonging, it’s tremendously interesting for any Spanish speaker. To listen to its words is like seeing your own language in its infancy, and even earlier: in a nascent state. This language was spoken for five centuries by people who were totally distant from Spanish. That is, the mother tongue of all those speakers could be Turkish, Bulgarian, Macedonian, Italian, Greek, French, Romanian, etc. Doesn’t it seem unique that they’d speak their mother tongue in the street and inside their homes they’d switch to this archaic Spanish? The biography of Judeo-Spanish is wonderful and tragic. Whether or not it has a future is up for debate, occasionally between very antagonistic positions. Listen, it’s hardly used by anyone at this point. The last speakers of the language are dying. There are many academic initiatives seeking to preserve it, and there are also isolated writers, but as you know, a language does not stay alive by decree. What is indisputable is that there should be some kind of souvenir—sound-based, literary, or poetic—marking its passage through the world. It makes me sad to talk about that. It’s as if I were beside a beloved person on their deathbed. I don’t know. There are surely other opinions on the matter. There are those who think it won’t die. I’d like for them to be right, but if there aren’t kids anymore who hear it daily, if it’s not used by anyone other than a handful of older people, how could it stay alive, then?

Alejandro Meter is Professor of Latin American Literature in the Department of Languages, Cultures and Literatures at the University of San Diego, where he teaches courses on Latin American cultural history, 20th and 21st century literature, and the Jewish experience in Latin America.

Myriam Moscona is a Mexican writer, and the author of numerous books of poetry including Las visitantes, De par en par, Negro marfil/Ivory black, and, most recently, Ansina. She received a Guggenheim Fellowship and the Xavier Villaurrutia Prize for her first narrative work, Tela de Sevoya.

Fiction
Tela de Sevoya (Onioncloth)
An excerpt from Tela De Sevoya, an elegy for Ladino.
Myriam Moscona
Sign up for our email newsletter, featuring exclusive original content
Short on time?
Sign up for our weekly Monday roundup of everything you missed in Jewish Currents last week.