Despite its attunement to the political potential of language, Ben Lerner’s The Topeka School remains trapped in reductive narratives about the Trump era. 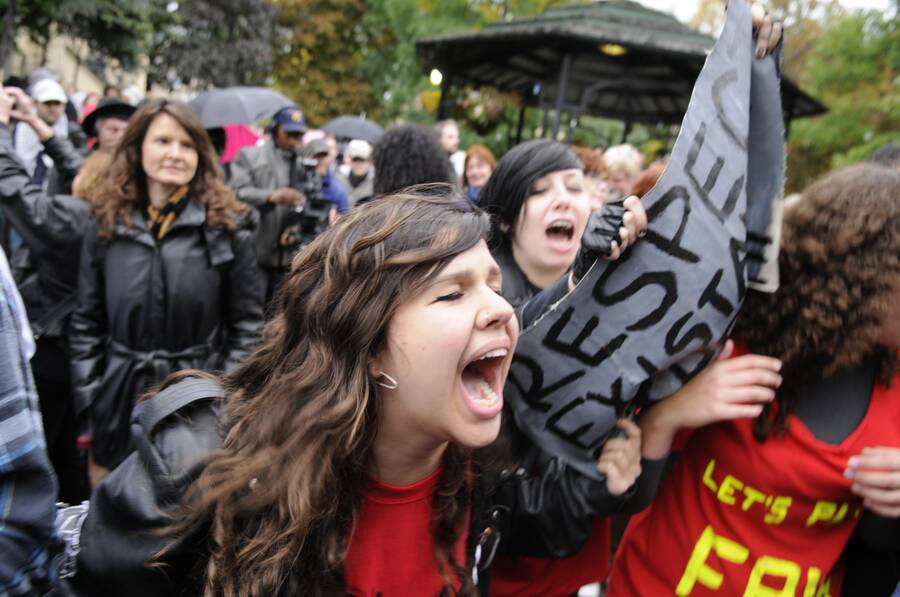 Discussed in this essay: The Topeka School, by Ben Lerner. Farrar, Straus and Giroux, 2019. 304 pages.

IN “CONTEST OF WORDS,” an essay in the October 2012 issue of Harper’s, Ben Lerner reflected on his past as a high school policy debate champion. “If you could walk the halls like an anthropologist or a ghost and peer into the rooms mid-round,” he writes, you would witness “what is nominally an exchange of ideas [reduced] to an athletic display of unreason.” This “athletic” exercise of speech against an opponent took the form of what debaters called “the spread”—a rhetorical practice in which a competitor speaks rapidly, cramming as much information and as many angles of argument as possible into the allotted time. To Lerner, these insane speeches, during which he “experienced occasional accesses of power,” resembled certain experimental poems, but they also reflected the corporate lingo of “fine print” and the side effects listed at the end of pharmaceutical commercials; all of these are “types of disclosure,” he writes, “designed to conceal” through sheer velocity. Lerner contrasts this everyday “spread” in American life with “the incredibly slow speech of politicians, of the new right in particular”—this “fetishized stupidity” of the Tea Party that marketed itself as a return to simplicity. The redemptive alternative, he writes at the end of the essay, might be found in a different kind of slow speech, one that doesn’t “attempt to cover for the spreadsheets of Wall Street or tranquilize the public”: the people’s mic, wherein protesters amplify a message by repeating a speaker’s words—the collective voice in the midst of protest.

Seven years later, the milieu into which this essay emerged (it was published on the eve of Obama’s re-election) has disintegrated. The Tea Party has morphed into the alt-right; Donald Trump is president, making every presidential speech exponentially dumber than Lerner could have possibly predicted. Occupy shifted the conversation further to the left, drawing a generation’s attention to structural inequality, before the movement dissipated, diffusing its energy elsewhere. Yet the crux of Lerner’s argument is recycled in his third novel, The Topeka School, which is, like “Contest of Words,” largely concerned with the physical act of speaking out loud. Much of the essay’s language is even reused in the novel’s first chapter, which is titled “The Spread.” The protagonist, Adam Gordon (a Lerner analogue, and the narrator of his first novel, 2011’s Leaving the Atocha Station), is a high school debate champion growing up in Topeka, Kansas, in the 1990s. Beyond debating, he explores the sonic possibilities of the spoken word with his other white Kansan friends as they appropriate hip-hop (somewhat offensively), freestyling at parties in his friends’ generic McMansions. While Adam is focused on manipulating speech in its various forms, his parents, both psychologists, dwell in the language of the subconscious. His mother, Jane, writes about relationships from a feminist perspective, while his father, Jonathan, focuses his work on the angry white boys of Kansas.

The Topeka School is the story of the Gordon family, told asynchronously and from each member’s point of view: Lerner rewinds and fast forwards, zooming into the intimacies of family dynamics as he shifts between their perspectives, creating a collage of spliced-together snippets of home movies. History flattens out as we flicker between the ’90s during Adam’s youth, the ’70s (when his parents meet), and the present. In the ’90s, both of his parents are therapists at an institution known as the Foundation, a haven where students and psychologists eat lunch, get haircuts, and play basketball together—and where those same psychologists enter into analysis with each other and carry on emotional affairs. Interpersonal transgressions between characters are matched with the novel’s own transgressions of form. Slippages in time allow multiple decades to unfold before our eyes, often overlapping.

Occasionally, other kinds of ruptures occur. In one chapter narrated by Jane, she interrupts her reverie to speak to the narrator—presumably her son Adam, whom we know, like Lerner, went on to study at an East Coast Ivy and eventually to become a poet. “[Y]ou could reproduce a slightly redacted version in your book,” she says of a sexist memo written by a colleague. These metafictional interruptions addressed to Adam (or Lerner) beyond the frame occur repeatedly throughout the book. Adam also interrupts himself in his own chapters; he is many ages simultaneously, stalking the scenes of his own personal history and haunting sites of the past.

This haunting also goes the other way, from the past to the novel’s multiple presents. In a variety of ways throughout the book, breakdowns in speech uncover past trauma, personal as well as historical: when a frightened Adam begs his parents not to send him to space camp, Jane notes that Klaus, her Holocaust survivor psychoanalyst colleague, “had suggested we think about all the resonances of the word ‘camp.’” In an earlier scene, Jane describes the experience of repressed sexual trauma resurfacing in therapy in the form of breakdowns in speech as being “like how some of the poets you admire sound to me, or I guess what Palin or Trump sound like, delivering nonsense as if it made sense, were argument or information, although I was speaking much faster than politicians speak; my speech was accelerating as if I were chasing after meaning as it receded.” The way language structures meaning is one of the book’s central concerns, as are the many ways language can be uncovered, molded, or buried to shift perceptions of truth, or even to alter reality (a young Adam refers to the elementary poems he learns as “spells”). But The Topeka School is also about language’s limits. Toward the end of the book, the style begins to change as Lerner describes Adam’s final speech and debate tournament while he rides the wave of the spoken word, the physical version of automatic writing. Words channel through him. It’s a pleasure to read: content and form align as Adam seems to enter a meditative state and “regimes of meaning collapse into the spread.”

As the novel’s interest in politician-speak suggests, The Topeka School is also attuned to language’s oppressive potential. Lerner writes that it would take Adam decades to unlearn the tactics of debate, “the verbal equivalent of forearms and elbows,” that he links to the methods of internet trolls. And in the novel’s final chapter, which takes place in the near present and in which Lerner begins to voice Adam in the first person, Adam takes his daughters to a playground and bears witness to verbal violence. A young boy refuses to allow the girls on the slide, calling them “stupid” and “ugly.” Adam asks the boy’s father to intervene; he refuses. Terrified, Adam recognizes this scene as an important meaning-making episode for the young, soft psyches of his children, the daughters of America—members of the next generation, subject to the same social inequalities as those who came before them: “I recognize that my reaction to your son is not just about your son; it’s about pussy grabbing; it’s about my fears regarding the world into which I’ve brought them,” Adam says to the “bad father,” right before knocking the phone from his hands.

But if Lerner is comfortable exploring the different political potentialities of speech, he is less adept at making sense of the contemporary political landscape more broadly. The novel’s most sustained attempt to speak to the political moment—as well as its most flawed gesture—comes in its attention to Darren, a peer of Adam’s and a patient at the Foundation, who is the subject of six short sections spread throughout the novel, each of which offers a small glimpse into the mini-tragedies of the troubled teen’s life leading up to the novel’s climax. Bullied by his peers, he slips into a rage and hurls a billiard ball at a young woman named Mandy Owen, shattering her jaw. Fast forward 20 years, and Darren turns out to have become an “almost certainly armed” Trump supporter in a MAGA hat; it’s an anticlimactic reveal. In this novel so concerned with the prehistory of the Trump era, Darren is a clear stand-in for a white working class that has succumbed to misogyny and racism, seemingly ripped right from an op-ed in a major daily. The fact that the novel offers him as its emblematic Trump supporter suggests that Lerner’s understanding of what has led to our present predicament is caught up in the reductive narratives of mainstream liberal media; both give too much explanatory power to the “white working class” as a direct cause of the Trump regime, when many wealthy, college-educated Americans voted for him as well. (In the novel, much is made of Adam being “Ivy-bound”; we’d do well to remember that Trump attended an Ivy, too.)

Presenting the final image of an adult Darren, Lerner writes, “What are the characters thinking and feeling? Tell me what led up to this scene.”  The novel itself is, in a sense, his attempt at an answer, offered out of the Arendtian belief in the political primacy of speech. It’s clearly Lerner’s preferred mode; his work has long documented his own discomfort with more direct political approaches. In Leaving the Atocha Station, Adam attends the protests following the 2004 Madrid train bombings somewhat reluctantly, aware that he is living history while letting his neurosis overtake him; in Lerner’s second novel, 10:04, the autofictional narrator houses an Occupy protester while (somewhat guiltily) not joining in himself. The Topeka School continues this tradition; it concludes at a protest Adam attends with his wife and daughter at an ICE detention center. Nothing really happens at this rally: an officer tells Adam to tell his daughter to stop drawing with chalk on government property. Adam refuses. “Do you have authority?” he demands. “Where does your authority come from again?” Is this small act of civil disobedience, in which Adam knows he is completely safe, supposed to amount to a radical gesture? This version of Lerner’s alter ego has finally joined in a protest, though he’s still awkward and slightly nervous about participating in the collective voice of “the people’s mic”—a call-back to the conclusion of Lerner’s 2012 Harper’s essay. If what Lerner has to offer in place of a more active politics is the political speech of his novels, it’s unfortunate that the content of this speech is so often uninspired, even when he continues to transgress the formal conventions of the novel itself. Despite nearly a decade of distance and transformative political upheaval, Lerner ends The Topeka School in nearly the exact same way: “It embarrassed me, it always had,” he writes in the novel’s final line, “but I forced myself to participate, to be part of a tiny public speaking, a public learning how to speak again, in the middle of the spread.” History is happening in real time, but Lerner has not caught up.

Dilara O’Neil is a writer and researcher in living in Brooklyn whose writing has appeared in n+1 and Harper’s, among others.