As tenants face impossible choices, debates emerge over how to organize. 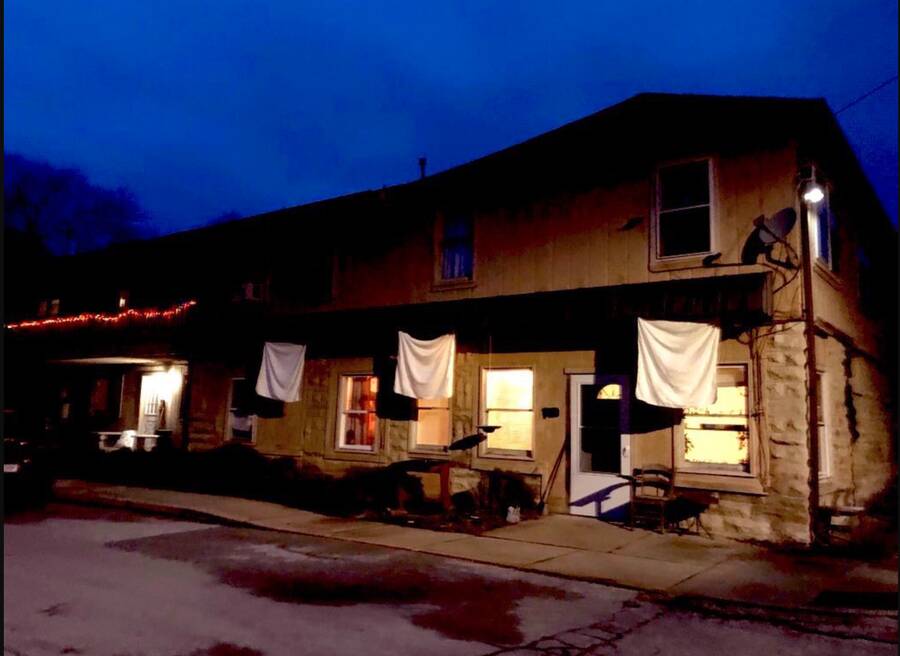 People are hanging white sheets on their homes to signal support for a rent strike. Photo via Twitter.
Tweet Copy Link Email Print

ON TUESDAY, confirmed coronavirus cases in the United States passed 160,000 and the death toll approached 3,000. Last week, 3.3 million people applied for unemployment benefits—an unprecedented number. Some economists are predicting more than 40 million people may be out of work by the end of June. And tomorrow, rent is due.

Even before the pandemic hit, many working people were living in a state of housing insecurity. About half of Americans live paycheck to paycheck, and a similar number are rent-burdened, meaning that they hand over more than 30% of their incomes each month to their landlord. The federal stimulus package passed last week halts some evictions and mortgage payments, and some states have implemented temporary moratoriums on evictions. Unless rent is canceled and back payments are forgiven for the duration of the crisis, however, housing courts will soon be overrun with landlords trying to squeeze broke tenants for several months worth of income after the pandemic passes.

In response to these conditions, housing activists have seen an upsurge of interest from newly politicized tenants across the country. Memes and imagery agitating for a nationwide rent strike are circulating widely on the internet. But despite broad agreement among organizers, politically activated tenants, and leftists more broadly that the situation is an emergency demanding sweeping action, a debate has broken out online—the only place where it is currently safe to gather—over how exactly to proceed.

On one side of the debate are those agitating for an immediate cessation of rent, effective April 1st. They point out that millions of people are currently unable to pay rent, or are choosing between rent and groceries or medicine—and that the situation thus requires an immediate, drastic response. This call has been shared most broadly via the hashtag “Rent Strike 2020,” a campaign launched by Socialist Alternative, a small leftist political organization, and the Rose Caucus, a group of socialists running for Congress in several states. The campaign’s demand is straightforward: every state should suspend rent, mortgage, and utility payments for the duration of the pandemic. If this demand is not met, it continues, tenants across the country should simply not pay. As one of the campaign’s slogans puts it: “RENT FREEZE OR RENT STRIKE: OUR LEADERS CAN TAKE THEIR PICK.”

In addition to the petition being circulated by Rent Strike 2020, which did not respond to my request for an interview, organizing guides have proliferated online, outlining the basic steps necessary to build support for a strike (step one: talk to your neighbors) as well as listing some already active rent strikes. In some cities, tenants have begun hanging white bedsheets out of their windows to indicate that they will refuse to pay rent come Wednesday. (Corporations like The Cheesecake Factory and Mattress Firm have also made it known that they will not be paying rent in April.)

On the other side of the debate, many veteran housing organizers have voiced concerns that a spontaneous rent strike would be ineffective and put tenants at risk. The eviction protections that state and federal governments have already enacted are both limited and temporary: anyone who doesn’t pay their rent this month or next, whether as a political or practical matter, faces the possibility of lawsuits and eviction once the moratoriums are lifted. “If you have no income to pay rent, then a ‘rent strike’ is an immediately attractive action. But that is not so much a rent strike as it is non-payment of rent,” the Philadelphia Tenants Union notes. “A rent strike is a demonstration of collective power, while mass non-payment of rent is collective desperation. It goes without saying that many landlords do not care if you are desperate, and neither does eviction court. If your goal is a ‘rent strike’ but you have no income to begin with, then you have no financial pressure to leverage.”

For housing organizers wary of calls for an immediate strike, the question of leverage is key. Allison Hrabar—an organizer with the Washington, DC-based group Stomp Out Slumlords (SOS), a campaign led by the local chapter of the Democratic Socialists of America—explained that when a building organized by SOS goes on strike, tenants pay their rent into an escrow account. “We’re not handing it over, we’re withholding it. That gives us leverage over the landlord,” she said. “The difference between that and someone who lost their job and can’t pay on April 1st is that there’s not a ton of leverage. It’s not motivating them to do what you want them to do—they might forgive your rent, but it’s not going to be citywide, or even building-wide. It’s not collective.” From this perspective, it’s not clear that the tactic of mass non-payment fits the demand for rent relief. If what tenants need is for the state they live in to cancel rent payments altogether for the duration of the crisis, then it is representatives of the state who ought to be targeted first.

“This idea of a nationwide rent strike is very cool, in the same way that it would be very cool to have a nationwide general strike,” Hrabar said. But she is skeptical that such a campaign would be able to get off the ground without taking into account the particularities of different cities and states. “You really have to start with what the law is locally—not that everything you do has to be legal. It just means that you have to use different tactics,” she said. In California, for example, there is no legally protected right to organize a tenants association, and those who have done so have often faced retaliation. Tenants there must be much more careful about when and where they talk to their neighbors about problems with their landlord than in New York, where tenants enjoy more protections.

In a sense, though, this kind of local calculus is precisely what calls for a national rent strike aim to circumvent. “It’s right that housing law is very local, so responses have to be very localized. But that’s also part of the problem,” said Rebecca Parson, a DSA housing activist and congressional candidate in Washington state—one of the many places in the US where rent control is banned. The Tacoma Tenants Organizing Committee is coordinating with housing organizations across the state, but Parson increasingly finds herself looking for a federal solution. “Some of these things would be best as national policies: national rent control, a national homes guarantee,” she said. “This patchwork makes it difficult to address these struggles.”

Given that the pandemic and the economic shutdown are global but hitting different populations in vastly different ways, it isn’t always easy to tell federal and local action apart. “If our governments don’t want people to get sick, then make sure everyone has a roof over their head,” Raquel Namuche, of the Queens-based Ridgewood Tenants Union (RTU), told me. “Housing is a public health issue and this pandemic is illuminating that quite clearly.” Namuche and RTU have been fighting against evictions, new luxury developments, and rising rents for years, but as the pandemic hit New York they recognized the need for a different approach, and put out a call to form a mutual aid network. “In less than two weeks we had 200 of our neighbors reach out saying they could provide support to others,” Namuche said. “Now more than ever people are realizing that what we once thought was impossible is actually within reach if we organize for it and push our governments to act.”

“A collective rent strike could help tip us over the boiling point that people are close to reaching,” she continued. “Where you once had people who were living paycheck to paycheck you now have people with no money at all—why give the last of your money to your landlord when you have mouths to feed?”

Over video calls and chat rooms, organizers are struggling to channel the energy behind calls for an immediate rent strike into something that will outlast the current crisis. “If there is not an organization, any attempt at a rent strike is going to crumble,” Timothy Schatz, an organizer in Eugene, Oregon, told me. “When panic sets in, you need the union—the safety in numbers. It allows you to fight back when the landlord starts to pressure you. There will be legal threats, and there are only so many lawyers.”

Advocates for an immediate rent strike and more cautious organizers alike agree that any successful tenant action will involve the same vital step: tenants talking to their neighbors. The particular conditions of the current crisis, however, have made preparing for collective action—whether future or immediate, legal or illegal—even more difficult than usual. Even as neighborhood-based mutual aid projects are popping up around the country, the pandemic has severely restricted people’s ability to build relationships and trust—the necessary precondition of doing something as risky as going on strike together. This is also true in terms of pressure tactics. “It’s important for the person being targeted to feel like they’re caught in an onslaught, but we can’t meet in person. We can’t occupy someone’s office,” said Parson. In Tacoma, Washington, she noted, one landlord offered a $30 discount for anyone who pays by April 5th. “It’s a slap in the face.”

In another area of broad agreement on the left, both supporters and skeptics of an April rent strike are circulating petitions lobbying local governments for a rent cancellation. The camps diverge, however, over what should happen when governors and legislatures don’t accede to this demand. “It’s valid for folks to raise caution” about a rent strike, said Amber, a member of Can’t Pay Won’t Pay in Durham, NC, who asked that her last name be withheld. “It is precarious. But at the same time, so are the lives of many people right now. We don’t know what’s going to happen, but we have to do something.” She continued: “For the people who literally cannot pay their rent, it’s not going to be a choice for them. The ‘strike’ word asks for solidarity from those who have the income to do so. Their participation will be a strike in solidarity with those who don’t have a choice.”

It remains unclear what possibilities will emerge when people simply don’t pay their rent. “Things are going to get worse,” Schatz, the organizer in Eugene, said. “You can get caught in a loop of saying what ought to be done, rather than looking for a strategy that works. It’s better to ask how we can ride the wave of crisis into growth that improves people’s lives, rather than saying, ‘Things are unjust, so let’s do a rent strike.’”

Regardless of which side of this debate one is on, the most pressing tasks at hand remain essentially the same: talk to your neighbors (at a distance) and find out how they’re doing and what they need. For the moment, no one really has an answer to Parson’s fundamental question: “When April 1 comes, and people can’t pay rent, what’s going to happen?”

Brendan O’Connor is a freelance journalist based in New York City. He is working on a book for Haymarket about immigration, capitalism, and the far right.