The amendment comes after the State Department released a waffling statement on the death of the Palestinian American journalist. 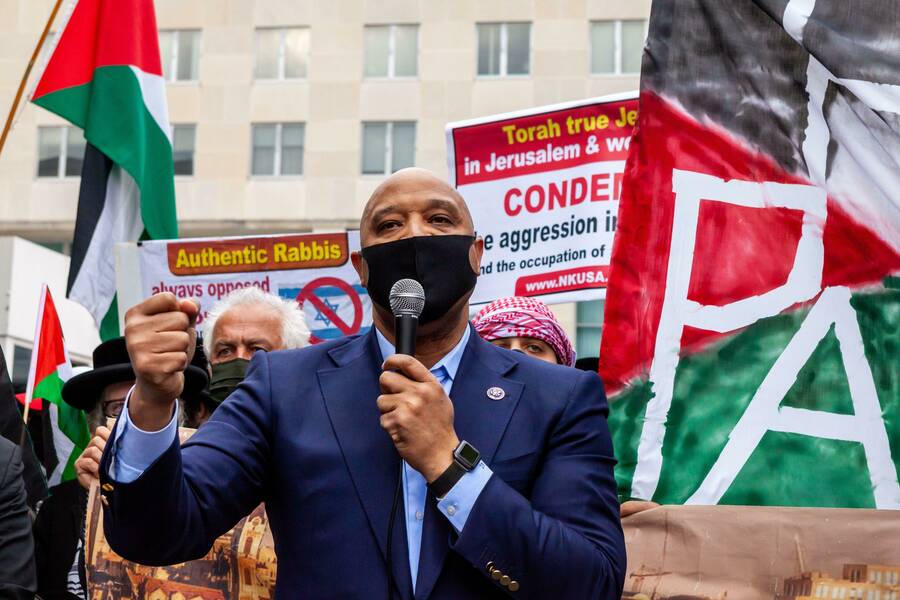 Congressman Andre Carson speaks to a crowd of several hundred at a May 2021 protest calling for the United States to stop funding violence in Palestine.

On Tuesday night, 11 Democrats introduced an amendment that would force the FBI and the State Department to investigate the killing of Palestinian American journalist Shireen Abu Akleh and determine whether US weapons were used to kill her.

Abu Akleh, a prominent Al Jazeera reporter, was killed on May 11th while reporting on an Israeli military raid in the West Bank city of Jenin. Her death attracted international outrage, including in the United States, especially because she was an American citizen. Israeli officials initially suggested that she may have been killed by Palestinian gunmen who were firing on Israeli troops during the military raid. But multiple investigations by news outlets, as well as UN human rights officials and the Palestinian Authority, concluded that an Israeli soldier killed her. (Israel eventually allowed for the possibility that its own soldier fired the fatal shot.)

The proposed congressional measure was spearheaded by Indiana representative Andre Carson, and submitted as an amendment to the National Defense Authorization Act (NDAA), the annual bill that authorizes Pentagon spending and helps set US military policy. “The killing of Al Jazeera reporter and fellow American, Shireen Abu Akleh, was not only a tragedy; it was an affront to press freedom and to all Americans. We need answers and accountability from the Israeli government,” Carson told Jewish Currents in a statement. It was introduced one day after the State Department, in its first statement attributing blame for Abu Akleh’s death, concluded that Israeli soldiers likely killed the journalist. The department based its conclusion on the work of the US Security Coordinator, an official stationed in Israel/Palestine, who examined the bullet said to have killed Abu Akleh—which US officials said was so damaged they couldn’t determine its provenance—and reviewed the Israeli and Palestinian probes into the killing. The State Department also said it relied on the work of “independent, third-party examiners,” though it’s unclear who they were. Yet the State Department also said Israel’s killing of Abu Akleh was unintentional, and that it was the result of “tragic circumstances.” Those statements angered human rights advocates, who have requested that the US conduct its own investigation, meaning US officials would look into the killing themselves without relying on other parties’ work.

“This was the State Department’s way of trying to move on from the issue,” said Yousef Munayyer, a fellow at the Arab Center Washington DC. “The fact that there is continued congressional advocacy immediately after this unfortunate and poor statement from the State Department is a good reminder that this issue is not going to go away. People are going to continue to speak out and demand accountability for the killing of Shireen Abu Akleh.”

Carson, a frequent supporter of Palestinian human rights in Congress, and his colleagues—including Reps. Rashida Tlaib, Alexandria Ocasio-Cortez, Ayanna Pressley, Cori Bush, and Betty McCollum, among others—are now attempting to escalate pressure on the Biden administration over the killing. Their amendment, and specifically the call for a US investigation, reflects human rights advocates’ distrust of the Israeli military’s ability to investigate the killing. The Israeli military police have refused to open a criminal investigation into Abu Akleh’s death—and even if they did, there’s almost zero chance of a criminal prosecution of the soldier who killed Abu Akleh, given Israel’s poor track record of holding soldiers accountable for the deaths of Palestinian civilians. Instead, Israel has conducted a non-criminal probe into the death, and the Biden administration has said they believe Israel has the capacity to conduct its own investigation into the killing, though Secretary of State Antony Blinken has also called for an “independent” investigation into the killing.

“There are so many unanswered questions about the killing of Shireen Abu Akleh,” said Hassan El-Tayyab, the legislative director for the Friends Committee on National Legislation, a Quaker peace group. “We don’t know how the State Department came to the conclusion that this killing wasn’t intentional. So it’s really critical that we make the case to House leadership to ensure that the Carson amendment gets a vote and gets adopted into the NDAA.”

But it’s unclear it will even get a vote, let alone pass as an amendment to the NDAA, given the overwhelming support Israel enjoys from congressional leadership. The amendment either has to be included by Democratic leadership as part of what’s known as a “manager’s package,” which refers to a cluster of amendments that congressional leadership attaches to the NDAA, or make it past the House of Representatives Rules Committee, which is typically unfriendly to such measures. If it gets past the Rules Committee, an individual vote on the amendment could be held. Last year, Reps. Mark Pocan, Ocasio-Cortez, and Tlaib submitted an NDAA amendment that would require the Biden administration to halt the export of certain US-made bombs to Israel for a year. The amendment, however, was killed in the Rules Committee.

Still, Carson’s amendment is among a spate of congressional measures that emerged after the killing of Abu Akleh, reflecting the depth of congressional concern over the killing of an American journalist by a close US ally. Carson was among 57 representatives to send a letter in May to Secretary of State Blinken and FBI Director Chris Wray demanding an independent investigation into the death of Abu Akleh. In June, 24 Senators pressed President Biden for “a thorough and transparent investigation under U.S. auspices.” A separate letter sent to Blinken in June calling for a “full and transparent” investigation was signed by Democratic Senator Jon Ossoff and, in an unusual move, by a Republican senator, Mitt Romney.

But Carson’s amendment is the first to echo a demand made by the Abu Akleh family: that the US should determine whether US funds or weapons were used in the killing of the American journalist. Such a finding would have implications for the flow of US military aid to the Israeli unit that killed Abu Akleh. Under the Leahy Law, named for Vermont Senator Patrick Leahy, who authored the 1997 legislation, the US must cut off military assistance to a unit found to be responsible for a grave human rights violation if the foreign country is unwilling to hold the responsible unit accountable. The Leahy Law has rarely, if ever, been enforced against Israel, in part because the State Department does not have an adequate system to track the flow of US military aid to individual Israeli army units. But Palestinian human rights advocates say the level of detail that has emerged in investigations into Abu Akleh’s death may make it possible to enforce the Leahy Law on Israel in this case. Israeli officials have revealed it was the Duvdevan unit, an elite military unit, that fired in Abu Akleh’s direction during the May 11th raid in Jenin.

“We know the unit that was involved and likely the vehicle from which the shots came from. There exists in this situation a degree of information that is not often available,” said Munayyer. “There is, potentially, a pathway to the implementation of Leahy.”

This article has been updated to include a statement from Rep. Andre Carson, and to include more information on the NDAA legislative process. This article and the headline also erroneously referred to Carson's measure as "legislation"; an "amendment" is not considered "legislation."