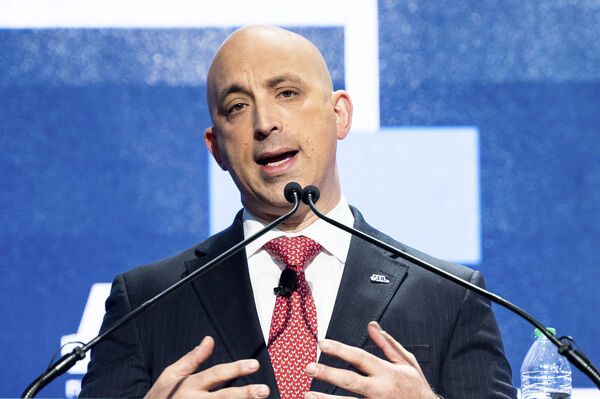 Every national conversation about American antisemitism inevitably involves one organization: the Anti-Defamation League. The group, which frames itself as a politically neutral watchdog, is generally taken as the leading authority on antisemitism. But as Jewish Currents has repeatedly shown, the ADL is far from a disinterested party. For today’s newsletter, contributing editor Noah Kulwin examines the ADL’s response to recent high-profile incidents of antisemitism, painting a portrait of an organization less interested in understanding and addressing anti-Jewish bigotry than in pro-Israel advocacy and shoring up its own future.

On October 27th, the Brooklyn Nets point guard Kyrie Irving tweeted a link to a film claiming that the Holocaust was a Jewish fiction, among other spurious and offensive allegations. Irving, who has endorsed ideas of this caliber before, came under great pressure to apologize. Initially, he acquiesced: In a joint statement on November 2nd, Irving, the Nets, and the Anti-Defamation League (ADL) announced that Irving and the Nets would each donate $500,000 “toward causes and organizations that work to eradicate hate and intolerance in our communities . . . work[ing] with ADL . . . a nonprofit organization devoted to fighting antisemitism and all types of hate that undermine justice and fair treatment for every individual.” But further on-camera pressure from the press soon revealed that Irving was not actually feeling all that apologetic, and the next day, ADL CEO Jonathan Greenblatt announced that his group was now rejecting Irving’s donation. Just a week later, Greenblatt and Adidas (Nazi-founded, by the way) unveiled a new four-year partnership to fight antisemitism, which involved the apparel company donating more than $1 million to the nonprofit. This contribution came on the heels of Greenblatt condemning Adidas for its initial silence about antisemitic statements by its business partner Kanye West (who now goes by Ye) and then praising the company for eventually cutting ties with the rapper.

With both the Nets and Adidas, it’s clear that the ADL—under the guise of battling antisemitism in the public sphere and censuring companies that permit it—is making itself available for a kind of corporate triage, providing or withholding its imprimatur as individuals and organizations adhere to or depart from criteria determined by the ADL itself. The fact that in both of these cases the guilty parties’ penance involved donations to the ADL puts the group in an awkward position to serve as a moral arbiter, since its analysis could easily appear compromised by its own interests.

The tens of millions that the ADL takes in yearly in the name of fighting antisemitism is not only used for anti-bigotry curricula. On the same day that the ADL revealed the joint venture with Adidas, they also announced their “acquisition” of JLens, a corporate governance advocacy group that led a successful campaign to force the US firm Morningstar, whose “ratings” of investment quality are essential financial data used around the world, to “take additional steps to address alleged anti-Israel bias in its ratings,” in the words of The Times of Israel. This move is only the most recent innovation in the ADL’s decades of Israel advocacy work. Greenblatt’s predecessor, longtime chief executive Abraham Foxman, refashioned the organization into perhaps the most influential mainstream pro-Israel lobby in the late 1980s: In this role, Foxman successfully campaigned to cancel talks by critics of Israel, caped for the American surveillance dragnet against Muslims, and oversaw a spy ring working with South African intelligence agents to surveil left-wing San Francisco Bay Area political activists. As an extensive Jewish Currents investigation documented in February 2021, Greenblatt’s ADL has followed a similar trajectory.

Although many of the ADL insiders who spoke to Currents for that story acknowledge that there has always been a tension between the ADL’s “civil rights” agenda and its pro-Israel maneuvering, the facts of the piece reveal an institution coming to grips with its true personality: a pro-Israel lobby with a civil rights hobby. As a result of this contradictory mission, the ADL has permeated political discourse in the worst possible manner, using its moral authority to shield Israeli atrocities from criticism while offering the public misleading information about the nature and scale of contemporary Jew hatred. By conflating critique of Israel with antisemitism, the organization obscures the actual threat antisemitism poses as part of the vast constellation of bigotries channeled by the global right and abetted by institutional power. Indeed, when confronted with genuine antisemitism, the ADL’s response is often, as in the cases of Kyrie Irving and Kanye West, to prop themselves up and profit. In addition to validating antisemites’ paranoid fantasies of a Jewish conspiracy, this grift redirects concern about rising antisemitism to the ADL’s central project of defending Israel at any cost.

Whatever sanity prevails at the ADL is inconsistent with its mission, which under the Biden administration has been to maintain dual, steadfast commitments to supporting the Israeli government and showing up in every possible news article in which the word “antisemitism” appears. Unlike Trump’s successive giveaways to Israel—relocating the US embassy from Tel Aviv to Jerusalem, shifting Israel’s alliance with Gulf Arab states from covert to overt with the Abraham Accords, kicking the Palestine Liberation Organization out of Washington—Biden and his secretary of state, Antony Blinken, have opted for saying little and doing less. While the Trump years put Greenblatt in the delicate position of praising the administration’s pro-Israel policies while tepidly castigating the president’s alignment with antisemites, under Biden, Greenblatt has spent his time positioning the ADL as a supra-political entity capable of diagnosing the antisemitism virus in an increasingly fraught political era.

All available evidence suggests that Jonathan Greenblatt has less of a personal political agenda than an ability to read and respond to the intentions of his donors and their political allies. This is unsurprising, considering that he has no previous experience with the analysis or combatting of antisemitism; he came to the ADL after co-founding a bottled water company and a stint as an aide to the Obama White House’s Office of Social Innovation and Civic Participation. His political incompetence was on vivid display during the Trump years, manifesting most often as ham-fisted hemming and hawing. Despite acknowledging, for example, that there was a problem with Trump’s hesitance to criticize his fans at the Unite the Right rally in Charlottesville—the president said there were “very fine people” among the white supremacists present—Greenblatt’s response also included this misdirecting non sequitur, captured in an article in The Atlantic published a few days after the 2017 race hate rally: “Heck, there’s Jewish grandchildren running around the White House.” His interviewer further noted that the ADL chief “argued that the backlash against Trump’s comments is not about politics—it’s about recognizing a pattern of anti-Semitism” emanating from Trump’s orbit.

Naturally, he who believes antisemitism is apolitical will have a warped understanding of the politics of antisemitism. In an interview with The New Yorker’s Isaac Chotiner this past April, Greenblatt insisted—as he has many times—that anti-Zionism is inherently antisemitic, then dissembled when pushed on the matter, offering contradictory explanations and logical fallacies, insisting that while it was acceptable for an academic to hold anti-Zionism as an abstract idea in their head, “I find that I don’t have time for that theory. I’m living with the consequences of the practice and the people who propound this idea.” (His price for “living with the consequences,” according to 2020 ADL tax filings? Roughly $1 million a year.) More recently, Greenblatt betrayed historical illiteracy by praising Elon Musk in an interview with CNBC as the “Henry Ford” of “our generation,” seemingly disregarding Ford’s infamous antisemitism. (Greenblatt later apologized for invoking Ford. For his part, Musk would go on to restore the Twitter accounts of both Ye and Andrew Anglin, founder of the neo-Nazi website The Daily Stormer, while relinquishing content moderation duties and unleashing, according to the ADL’s own data, unprecedented hate speech on the site.)

The ignominy compounds: Accompanying the ADL’s 2021 edition of its annual audit of antisemitism in the United States was a statement from Greenblatt claiming that the survey data showed “Jews are experiencing more antisemitic incidents than we have in this country in at least 40 years, and that’s a deeply troubling indicator of larger societal fissures.” On MSNBC the following month, Greenblatt was more direct, holding up the assault of Jewish diners in Los Angeles as evidence that life is “like a Charlottesville every day” for American Jews. But as Mari Cohen has demonstrated in Jewish Currents, the numbers constituting Greenblatt’s fear-mongering are shaped by the ADL’s own contemptible political presuppositions—for instance, the idea that anti-Zionist statements amount to antisemitic hate crimes—and by the media narratives around such data, which affect respondent sentiment. The ADL, perhaps more than any other single entity outside of Israel since the Holocaust, is responsible for the popular idea of what antisemitism looks like, where it originates, and what it means—and it has wielded that responsibility with a singular focus on protecting Israel and its image. Notably, after Israel’s 11-day attack on Gaza and the West Bank in May 2021, in which at least 282 Palestinians were killed, the ADL worked to redirect the discourse to center Jewish victimhood rather than Israeli brutality. (It was at this time Greenblatt made his “Charlottesville every day” comments on television.) This past May, Greenblatt rang in the one-year anniversary of Israel’s bombardment by declaring, in an extensive presentation at an annual ADL gathering, that three leading Palestine solidarity groups were “extremist” in nature, “the photo inverse of the extreme right that ADL long has tracked.”

Although Kanye West, Adidas, and Kyrie Irving are for now in the rearview mirror, the ADL has leveraged what it claims is another spike in Jew hatred into a bipartisan Congressional request for the Biden administration to develop a “National Strategy to Combat Antisemitism,” plus the creation of an interagency antisemitism czar. “What they are demanding is what ADL has long called for in our COMBAT Plan: A unified national strategy to combat antisemitism,” the ADL’s top lobbyist, ex-AIPAC executive Dan Granot told Jewish Insider. “Now is the time for a concerted, coordinated, whole-of-government strategy to address the hatred that is becoming dangerously mainstream.” The ADL’s evident influence in the Biden administration is directly connected to the successful insinuation of its flawed voice and stunted morality into the middle of every conversation about antisemitism. The cumulative effect of this ADL campaign, and that of the Israel lobby more generally, is to condition the American public to believe that Jews are unsafe in such a way that the remedy is to be pro-Israel, whether that means snooping on pro-Palestine peaceniks or sending billions in military aid, all while Palestinians suffer and die in silence, an echo chamber immaculately created by Greenblatt and his forerunners.

While it is thus insulated from critique, the Jewish state has returned Prime Minister Benjamin Netanyahu to office amid a coalition in which, as The Times of Israel reports, “right-wing stalwart Likud will find itself the left-most faction in Israel’s most hardline government yet.” This development is giving even Abraham Foxman second thoughts. “I never thought that I would reach that point where I would say that my support of Israel is conditional. I’ve always said that [my support of Israel] is unconditional, but it’s conditional,” the former ADL chief told The Jerusalem Post last week. “I want Israel to be Jewish, absolutely. But I want it to be a democracy.” Under its current leadership, the ADL issued a statement congratulating Netanyahu, while also “express[ing] concern” over the “extremists” included in the coalition. But the organization has signaled no shift in policy. On the contrary, all signs point to ADL support for Israel remaining as robust as the antisemitism racket built to sustain it.