The far-right activist and politician died in disgrace, but Shaul Magid’s new book argues that his ideas have shaped mainstream American Judaism. 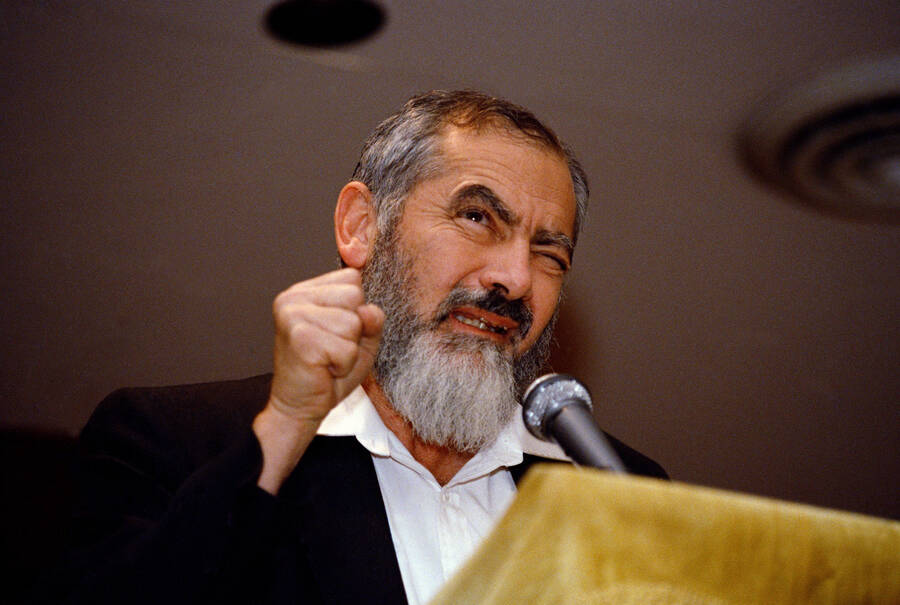 Meir Kahane, founder of the Jewish Defense League (JDL), a far-right American militant group that once boasted 15,000 members, is now mostly remembered as a marginal, unsavory provocateur. After years of promoting Jewish self-assertion, attacking liberal big-city mayors and Black radicals for supposed antisemitism, and advocating on behalf of Soviet Jewry, Kahane was convicted of manufacturing explosives in 1971, and he immigrated to Israel in disgrace. There he struggled to build a new political movement; though he was elected to the Knesset in 1984, he was barred from running for reelection for holding racist views. When he was assassinated in a Manhattan hotel in 1990, he was near the nadir of his career. Today, the right-wing activist and politician does not receive even a single mention in prominent American Jewish historian Jonathan Sarna’s canonical history of American Jews.

Yet recently, the Jewish right has grown stronger in Israel and the United States, returning Kahane’s name to the headlines. The Israeli politician Itamar Ben-Gvir, who was educated in the Kahanist youth movement and calls Kahane “a holy man,” was elected to the Knesset in March. In the US, the vulgarity and street violence of the Jewish Trumpist right recalls Kahane’s own tactics. Last year, young Orthodox men spurred on by right-wing radio host Heshy Tischler assaulted an Orthodox Jewish reporter for covering their resistance to coronavirus restrictions.

But in his new book, Meir Kahane: The Public Life and Political Thought of an American Jewish Radical, Jewish studies scholar Shaul Magid argues that Kahane’s philosophy is not resurgent, but rather has been here all along—and not only on the far right. Magid argues that even when Kahane was shunned and the violent, showy tactics of the JDL went out of favor, his ideas remained tremendously influential. Kahane helped to reshape the post-war liberal consensus’s hold on the American Jewish community by emphasizing Jewish difference and highlighting the conflicts between liberal values and specifically Jewish interests. While Jewish liberalism tends to narrate its own history as progress within a stable, contained system, Kahane’s legacy, in Magid’s telling, demonstrates how the current mainstream consensus is actually a product of tremendous turmoil and radicalism from both sides. Placing Kahane’s life and voluminous writings in the context of the cultural and political radicalism of the 1960s and ’70s, Magid contends that Kahane was a systematic and interesting thinker—one whose critique of postwar American liberalism is more cogent than has been recognized.

I spoke with Magid about Kahane’s critique of liberalism, why his ideas are appealing to Israel’s far right today, and how he helped shift the way mainstream Jewish institutions think about issues like antisemitism, intermarriage, and “Jewish continuity.” This interview has been edited for length and clarity.

Raphael Magarik: Why did you decide to write a book about Meir Kahane?

Shaul Magid: One of my Master’s students decided he wanted to do his thesis on Kahane, so we met and read through his entire corpus. I didn’t realize how enormous it was—there’s so much here! Kahane’s detractors usually consider him to be a thug who doesn’t have any serious thought. And it doesn’t seem like his supporters read him that carefully, either; there’s a personality cult. But actually reading him, I decided there was a coherent worldview. He even provided an interesting critique of liberalism from the right that in many ways overlaps with a criticism of liberalism from the left.

RM: What was Kahane’s critique of American liberalism?

SM: Kahane was adopting the notion that liberalism was the death knell of American Judaism, because it provided no guardrails to prevent assimilation [which would also eliminate Jewish difference]. It’s an anti-assimilationist argument, but in the same way the Black Panthers were anti-integrationist. In 1963, Malcolm X gave this famous “coffee and cream” speech, in which he argued that for Black people, integrating into white America is really the erasure of blackness. And Kahane felt the same way about Jewishness. So in a certain sense, he was one of the early advocates of what he called “Jewish survivalism,” which we now call “Jewish continuity”—and which has actually become part of the liberal Jewish agenda.

RM: What other pieces of Kahanism have been “mainstreamed”?

SM: All the anxiety about intermarriage. Worrying about intermarriage has become the main project of American Jewry! Kahane wrote a book on the subject in 1974, when very few American Jewish leaders were writing about it—he knew the crisis was coming. Also, the unwillingness to distinguish between anti-Zionism and antisemitism, which is a huge issue now. Kahane felt [the two were the same] after 1967, even when most American Jews still felt that there was a distinction. And then also the rising anxiety about perennial antisemitism in America: American Jewry is less convinced than it was 50 years ago that it really has a robust future in America. Kahane was instinctively able to isolate the challenges of American liberal life.

Kahane is for me almost what [17th-century rabbi and self-proclaimed messiah] Shabtai Tzvi was for [scholar of Jewish mysticism] Gershom Scholem. Here’s a heretical guy who wasn’t particularly educated, who has an incredible impact on everything that comes after him—even for people who don’t know who he is. Scholem said that Shabbtaut [the movement that emerged around Tzvi] filters through all of modern Judaism in all kinds of ways. I wouldn’t go as far as to say that about Kahane. But while there is an attempt to erase Kahane from American Jewish history—he’s persona non grata, and he’s a crazy guy—I can hear Abraham Foxman, when he was still at the Anti-Defamation League, saying exactly the same things Kahane said.

RM: The book argues that Kahane is very American. There’s a revealing line in the JDL Manifesto, where he says, “the Jewish Defense League was created, because we think that the American Dream is worth saving, and can be saved.” What does he mean by that?

SM: Surprisingly, given his later move to Israel, he was a tremendous believer in America as a project for the Jews. He felt that America was the best country for the Jews in the history of Jewish civilization. And that democracy in America was the greatest democracy in the world. In his book about the Vietnam War, he says that if America lost that war, there would be a spike in antisemitism: He absorbs the anti-communism of the 1950s.

A lot of other American Jews, many of whom were immigrants or survivors, said, “Don’t make trouble, stuff here is not any different than it was in Poland.” But Kahane said, “No, America is a different place for the Jews, and we have a different kind of role to play.” This is true of the New Left too, and a whole generation of Jews who felt American enough to stand up as Jews and protest against America. There’s a certain similarity between Kahane and someone like [Chicago Seven activist] Abbie Hoffman. When Abbie Hoffman was asked what he thought of Kahane, his response was, “I agree with his tactics, but I disagree with his goals.”

This is why I think Kahane fails in Israel. He’s thinking in very American categories. He comes to Israel, and he suddenly wants to legislate the prohibition of Arab–Jewish dating, and everyone’s going, “Who cares, we are the majority; we’re not worried about intermarriage.” He couldn’t make the shift from being a minority to being a part of the majority. Also, he had a very American view of democracy. For him, there’s only one kind of democracy: liberal democracy. Everybody must be given equal rights. That’s why, for Kahane, Israel can’t be a democracy. He cannot understand the idea of an “ethnic democracy.” In one of his books, he says that for Israel to be a Jewish state, it can’t be a democratic state.

RM: You describe Kahane as becoming a post-Zionist thinker later in life. Why do you see him that way?

SM: He feels that Israel has fallen victim to liberalism, the same way the American Jewish community has fallen into liberalism, and that the liberal Ashkenazi elite are in power and defining the project. For him, Zionism is Kahanism; there’s no other legitimate kind of Zionism. But of course, his Zionism is rejected, because of the racism law. So he comes back and says, “Oh, you’re calling me racist, but the secular Zionists, they’re the real racists. Because I believe God gave the Torah to the Jews and said, ‘This is your land,’ but if you don’t believe that, then you are just a racist, right?”

RM: When it comes to Kahane’s legacy on the Israeli right, you write about this marriage in today’s religious Zionist thinking between a messianic, utopian, mystical vision and a hard-headed, rationalist, non-utopian Neo-Kahanism. Why has Kahane’s worldview become an integral aspect of the movement in recent years?

SM: It’s easy for a romantic movement to be nonviolent when history is going their way. After 1967 [Israel’s military conquest of the West Bank and Gaza] and [right-wing Israeli Prime Minister Menachem] Begin’s victory in 1977, the settler project becomes part of the national interest. The settler movement doesn’t have to be violent; the state is doing the work for them. After Oslo, and the peace process, the [evacuation of the settlement of] Yamit in 1979, and then the Gaza withdrawal, once things start going in the opposite direction, that’s when the militarism is just waiting. Religious Zionism will always have a militant component that becomes activated when the state starts to work against its intended goal. The more you have a peace process, the more Kahanism will be activated within the religious Zionist movement. If you start to have a real pullout of thousands of settlers, then it will take center stage.

RM: It’s strange. Precisely as Kahane’s thought gradually trickles into the mainstream, he declines as a charismatic, individual leader, becoming a marginal figure.

SM: After 1987, Israel rejected him, and no one will let him speak in America anymore. In his correspondence with Rabbi Avi Weiss, his very pathetic letters are like, “Find me a place to give a talk, no one will invite me.” The irony is that as he descends into darkness, the ideas begin to settle in, both in America and in Israel. And, 30 years later, there are Kahanists in the Israeli Knesset.

Raphael Magarik is an assistant professor of English at the University of Illinois at Chicago.

Review
The Prophet with Eyes
In Olga Tokarczuk’s The Books of Jacob, based on the real life of a self-proclaimed Jewish messiah in 18th-century Poland, theological energy competes with the liberal novel’s finely wrought machinery.
Raphael Magarik
Review
Who Owns American Judaism?
Lila Corwin Berman’s new book traces the explosion of the American Jewish philanthropic sector over the past 70 years—and its corrosive effect on contemporary Jewish life.
Raphael Magarik
Sign up for our email newsletter, featuring exclusive original content
Short on time?
Sign up for our weekly Monday roundup of everything you missed in Jewish Currents last week.