Coronavirus disruptions have only intensified the resolve of striking UC Santa Cruz grad students fighting for a pay increase. 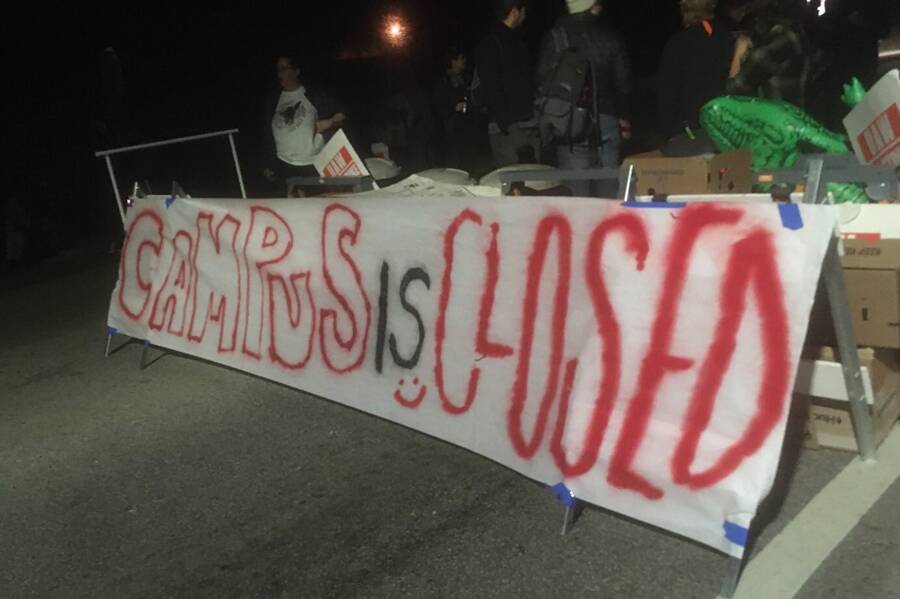 JUST DAYS after University of California, Santa Cruz announced it was suspending all in-person instruction to slow the spread of coronavirus, LuLing Osofsky, a PhD student who is eight months pregnant, wrote an open letter to university administrators asking if they were committed to leaving her and other recently fired grad students without health care “during an unprecedented global pandemic.”

Osofky is one of 82 UCSC teaching assistants who, in February, were fired from existing spring teaching appointments or barred from receiving new ones for refusing to submit students’ fall quarter grades as part of a wildcat strike—a strike not authorized by the union that represents graduate student workers—aimed at securing higher pay. After UCSC kicked off the strike, students across the University of California system soon joined their efforts: graduate workers at Santa Barbara, Berkeley, Davis, Irvine, Los Angeles, and San Diego campuses were either on strike or soon to be when administrators suspended classes in March. Across campuses, the primary demand is the same: a cost-of-living adjustment to help grad students afford the skyrocketing price of California housing.

Over the past few years, in response to worsening conditions, graduate students across the country have organized new unions and held strikes, even as universities and the Trump administration argue that the grad student work they rely on does not count as “labor.” Tensions have long festered within the UC system, as many grad students were dissatisfied with a 2018 union contract that won only a 3% annual wage increase, barely covering inflation, and was voted on during summer vacation, while many were away from school.

The onset of the pandemic has opened up new complications and possibilities within the existing crisis. In the last few weeks, higher education has faced a massive upheaval, with undergraduate students sent home and learning shifted online to avoid spreading Covid-19 on campus. For students like those at UCSC already struggling to afford housing and other living expenses, the pandemic has made the instability of their financial situations clear, especially since, due to shelter-in-place requirements, many have lost side jobs that supplemented their teaching stipends.

UC teaching assistants receive a base pay of around $20,000 per year—less than 60% of what’s estimated as a living wage for single adults in Santa Cruz County, where housing prices are steep and rising by the year. Undergraduate and graduate students at Santa Cruz and other UC campuses have been forced to live in tents or unheated trailers; others are regularly harassed by police for sleeping in their cars.

At Santa Cruz, students are demanding a cost-of-living adjustment of $1,412 per month, which, after taxes, is roughly equivalent to the monthly rent for someone living close to campus with two roommates. Such an adjustment would nearly double UC grad workers’ annual income. Over 200 teaching assistants began withholding their labor last December to demand their pay be increased. Five hundred students, meanwhile, pledged not to take teaching assistantship positions vacated by striking workers. One of the first striking workers to be fired was a single mother, who already struggled to afford the cost of UCSC’s subsidized housing for families.

The situation is especially pronounced for students in humanities and social science departments like literature, sociology, and art history, which, due to systematic underfunding, are unable to provide students with “bridge funding” that helps grad students in other fields fund their degrees. Angie Lou, a third-year PhD student in creative writing who was dismissed from her post as a teaching assistant after helping launch the wildcat strike last fall, said she has struggled to find housing she can afford anywhere near campus. “I think the motivation for a strike has been subterraneously festering for a long time,” she said. “But in this particular moment, the material conditions are at a point of desperation. People can only take so much before they rise up.”

UAW-2865, which represents over 19,000 UC student workers, has negotiated and filed grievances on behalf of those fighting for a cost-of-living adjustment, but the union’s bargaining agreement with the university (like many modern union contracts) forbids striking. To avoid legal issues, union leaders at UC Santa Cruz who favored a strike resigned from their positions the night before it began in December. When classes resumed in January, thousands of undergraduates joined grad students for rallies and roadblocks that bolstered the strike’s efficacy, frequently shutting down classes and impeding campus operations.

“We couldn’t do this without the undergraduates,” said Lou. “They’ve been with us at the picket lines every day, greatly outnumbering the grad students. We realize we stand for the same things: their tuition increases and housing expenses are part of the same issue” that keeps grad students underpaid, she says. The grad students are also working in solidarity with other campus workers, demanding that UC employees across all nine campuses, from faculty and lecturers to custodians and cooks, receive cost-of-living adjustments.

When asked to locate the source of their hardships, many UC students point to the university system’s governing Board of Regents, alleging that the Regents’ corporate-style machinations have resulted in slashed budgets, higher costs, and lower wages, while non-educational projects that generate revenue—such as parking lots, stadiums, hospitals, and dormitories—spring up left and right, creating kickbacks for industry at the expense of student learning. Many of the UC’s Regents are bankers or former business executives with few ties to education; the university affiliation allowed some to profit from brazen conflicts of interest until comprehensive reforms were passed in 2016. More recently, Regents have been accused of misusing university funds, sexually harassing students, and holding key meetings behind closed doors guarded by scores of police.

While proposals to privatize the UC by eliminating state funding have never been seriously entertained, many longtime faculty concur with students that a de facto shift toward privatization has long been underway. Governor Ronald Reagan began the shift in 1969 by pushing to increase the cost borne by students, who at the time only paid nominal fees of a few hundred dollars instead of today’s high tuition. With their tax revolt in 1978, California voters began to revoke support for funding public programs, and the state cut back on UC funding that had long been considered inviolable. By 2011, the UC was dependent on a tuition-funded model.

In a 2009 open letter to students, Bob Meister, a professor at UC Santa Cruz and then-president of the Council of UC Faculty Associations, raised the alarm about what he called the “financialization” of the university. Through his analysis of public and confidential documents, he concluded that the UC system was financing construction bonds by pledging tuition revenues as collateral, effectively using student money to raise the institution’s credit rating and lower interest rates, sidestepping restrictions on using state funding for such purposes. In order to appease the banks and lenders on which it’s come to depend, the UC now emulates private companies, investing in profitable medical, technological, and real estate projects to maintain diverse revenue streams while cutting costs wherever it can.

James Sirigotis, a striking PhD student at UC Santa Cruz who studies under Meister, says this appeasement has created bloat, with “administrators who are super overpaid doing the bidding of the Regents” while the quality of education suffers. “Keeping revenues high and wages low boosts the credit ratings, and also means I get inadequate support for my PhD,” he said. “They’re hiring fewer tenured professors and pushing more work onto grad students. It shackles undergraduate students in debt. What the movement has become is a demand for the university to return to serving its mission for public higher education. This means supporting employees, lowering or eliminating tuition—the way it used to be—and receiving high public financial support.”

Campus administrators have responded to the strike by saying their hands are tied. They simply don’t have enough funding to provide a cost-of-living adjustment, their argument goes, and students need to be more willing to compromise given the dearth of state funding. Lou balks at the implication that workers should figure out the details.

“I refuse to say where the [cost-of-living adjustment] money should come from,” she said, pointing to estimates that UC Santa Cruz spent $300,000 per day, or $5.7 million in total, on the campus police response to their picket line alone. ”All these budgets are being mismanaged, and with how much the administrators are being paid, it’s their job to figure out how to meet our demand,” she said.

For a moment, it seemed like Covid-19 could force the university to acknowledge that grad students are in crisis. With help from their statewide union, Olofsky and other dismissed workers successfully negotiated to win back their health care as UC campuses shuttered. But their movement was facing a new challenge: the UC’s sudden pivot toward online classes, with the expectation that professors and TAs alike will rapidly change how they teach.

"We see the university's turn to emergency measures as a rehearsal for a permanent shift to large scale online instruction,” the Santa Cruz grad students TAs wrote on their website, adding that this unilateral decision made by administrators could set “an alarming precedent for how a university can function without its workers.”

The pandemic has also required a shift to new protest tactics, with in-person picket lines and mass demonstrations no longer feasible. Grad student workers at UC Irvine launched a “digital picket line” that includes a mass email campaign and online meetings. Students across the system are collaborating on an intercampus website, Strike University, with free daily online events like teach-ins on the historical roots of social welfare strikes. “Our students have been attending these events instead of going to our usual sections,” Lou said in an email, “since we cannot conduct business-as-usual when students are going through food/medicine/shelter scarcity.”

At the end of March, UC Santa Cruz administrators offered to reinstate fired workers if they submitted grades in under 24 hours. Their offer limited its signatories’ right to file subsequent labor complaints. The strike coalition quickly pulled together a counter-offer, asking that the no-complaint clause be removed and that the $2,500 annual housing stipend previously given to some grad students be made available to all. They also asked that the university make a written commitment to “immediately engage in good faith bargaining” with the union for a true cost-of-living adjustment. Administrators did not respond to the counter-offer and instead moved to finalize the dismissals.

Campus organizers are supporting UAW-2865’s effort to have the university’s actions formally declared an “unfair labor practice,” which would allow the union to sanction the strike and prevent the possibility of future termination for the hundreds who are prepared to join. But some of the movement’s energy is now being diverted toward mutual aid efforts, to support students who find themselves out of a job due to the firings, the coronavirus crisis, or both. As campus workers struggle to hang on, Lou said, “The pandemic makes our precarity more visible than ever.”

Delilah Friedler is an editorial fellow at Mother Jones who lives in Oakland, on occupied Chochenyo Ohlone lands.