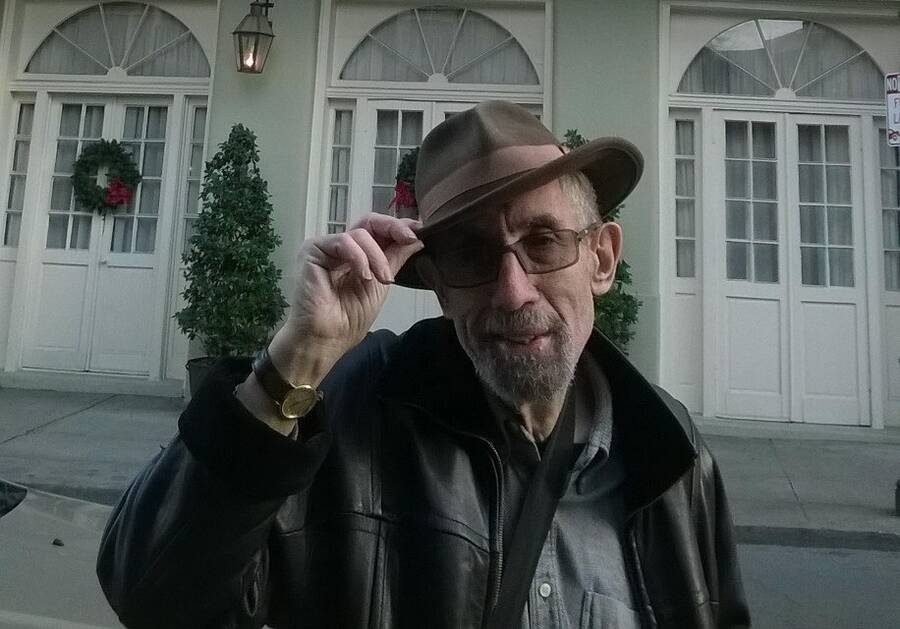 JOEL SHATZKY BEGAN LIFE as a red diaper baby, the only child of activists Benjamin and Bessie Shatzky, longtime subscribers to Jewish Currents. Born November 30th, 1943, in Vancouver, Washington, where his father worked on Liberty Ships during World War II, Joel became a lifelong fighter for racial and economic justice. The Shatzkys moved back to New York when Joel was two, and Joel grew up in the Grand Concourse neighborhood of the Bronx and studied music at his beloved High School of Music and Art. He received a bachelor’s degree in English in 1963 at Queens College-CUNY, a master’s degree at the University of Chicago in 1965, and a PhD in dramatic literature at NYU in 1970.

As a student at Queens College, Joel became involved in civil rights activism with the Congress of Racial Equality (CORE). A fearless and prodigious writer in every genre imaginable, Joel was a poet, editor, novelist, journalist, lyricist, humorist, and musician. Among his dozen published books, one became a standard reference work, Contemporary Jewish-American Novelists: A Bio-Critical Sourcebook. It was recognized by Choice magazine as an “Outstanding Book of 1997.” His writings on education, politics, and Holocaust history also appeared in The New York Times, Studies in Jewish American Literature, and Players. Joel edited the memoir of Holocaust survivors Dr. Susan Cernyak-Spatz, Protective Custody: Prisoner 34042, and Norbert Troller, Theresienstadt: Hitler’s “Gift” to the Jews. Joel and his first wife, Dorothy Shatzky, who passed away in 2004, wrote a memoir together, Facing Multiple Sclerosis: Our Longest Journey, published by the Multiple Sclerosis Society, about coping with Dorothy’s long-term struggle with that disease.

Joel’s big passions included drama, education, and music, especially when linked to social justice issues. After seeing Eugene O’Neill’s The Iceman Cometh as a child, he knew immediately that he wanted a connection to the world of theater. At 14, he recorded himself analyzing the plays of George Bernard Shaw in his best “Irish accent,” the Bronx inflection still unmistakable. He went on to write his PhD dissertation on Shaw and to become a professor of English at SUNY-Cortland, teaching drama and writing for almost four decades. Retiring from Cortland as professor emeritus in 2005, he settled in Brooklyn, where he taught literature and writing at Kingsborough Community College-CUNY for over ten years before retiring in 2018.

A talented and prolific playwright, dramaturge, and lyricist, Joel had many plays, operas, and musicals performed around the country and abroad. Beginning in 1969, he wrote close to 200 scripts and librettos, including collaborations with composers Richard Kroot (The Curious Virgin), Mark Simon (Mr. Natural and Downsizing), Lutz Mayer (Madame R, based on Chekhov’s Cherry Orchard, and the Adam and Eve retelling Damn! That Apple!, revivals of both of which are planned for summer 2020, though they may have to be postponed to 2021). His work was often humorous and satirical, as in his collaborations with Arthur Turner (The Great Impersonator) and Leonard Lehrman, whom he met at the 1987 Jewish Currents Dinner.

Joel invited Leonard, Helene Williams, and other theater artists and poets to Cortland to showcase their talents. In 1988, he was the creator, book writer, and co-lyricist with Leonard for Superspy: The S-e-c-r-e-t Musical, performed in Ithaca, Paris, Boston, and New York’s Center for Contemporary Opera, and revived at Manhattan’s Medicine Show in 2014. Excerpts from the show have been performed in Moscow, Melbourne, Tel Aviv, and across North America.

In 1992, Joel won a poetry contest with his poem, “Kalinin Bridge,” about the 28-year-old Russian Jewish architect Ilya Krichevsky, who was killed protesting the coup against Mikhail Gorbachev. Helene Williams sang Leonard Lehrman’s setting of it, accompanied by the composer at a Composers Concordance concert that year. On May 13th, 2020, in memory of Joel, they performed it again in a program for Brookline’s Center Makor.

1992 also saw the premiere of the Lehrman-Shatzky collaboration New World: An Opera About What Columbus Did to the “Indians”, which included 55 musical numbers—commissioned by the Puffin Foundation, previewed by After Dinner Opera at Lincoln Center, and staged at Heckscher Park by Ben Spierman.

Even after he was diagnosed with Parkinson’s disease in 2013, Joel continued his creative work, writing regularly for the Huffington Post and Jewish Currents, as well as appearing on WBAI. His last play, A Day in the Life, Parkinson’s, was performed at NYC’s Flux Factory in June 2019. His many other plays include The Day they Traded Seaver; Restoration: Vienna, 1938; Disconnections; Amahlia; and Baghdad Diaries, presented at Medicine Show and 13th St. Street Repertory Theatre, among other places. He was also the author of five published novels: Option Three (a satire of the corporate takeover of universities), Iago’s Tale (Shakespeare reimagined), Well of Evil (a young adult adventure), WAM! A Novel about Genius (Mozart imagined in different centuries), and Sophia: An Epic of Art, Love, War, and Revolution (the subtitle says it all).

Joel’s students uniformly praised his excellence as a teacher, highlighting his enthusiasm and commitment. Courageous in the face of adversity, and always passionate and funny—even while suffering from the debilitating challenges of Parkinson’s—Joel continued to produce his work until the end. His last play reading, Orphans, took place at Manhattan’s Westbeth Artists Community in February 2020.

After contracting Covid-19 while in rehab, near “the top of Mt. Sinai” Hospital in Brooklyn, Joel passed away on April 3rd, 2020. He is survived by his wife, Dr. Ilana Abramovitch, with whom he lived in the Kensington section of Brooklyn, as well as his son, Ben, his daughter, Judy, and two grandchildren.

To make a donation in his memory, the family is recommending these charities:

The Life You Can Save distributes philanthropic funds deemed by charity evaluators such as GiveWell to be among the most impactful, cost-effective charities in the world; their current focus is preventing Covid-19 in vulnerable communities.

The Parkinson’s Foundation is devoted to improving care and advancing research toward a cure.