A dispatch from Jewish anti-fascists in Virginia on the anniversary of the Unite the Right rally. 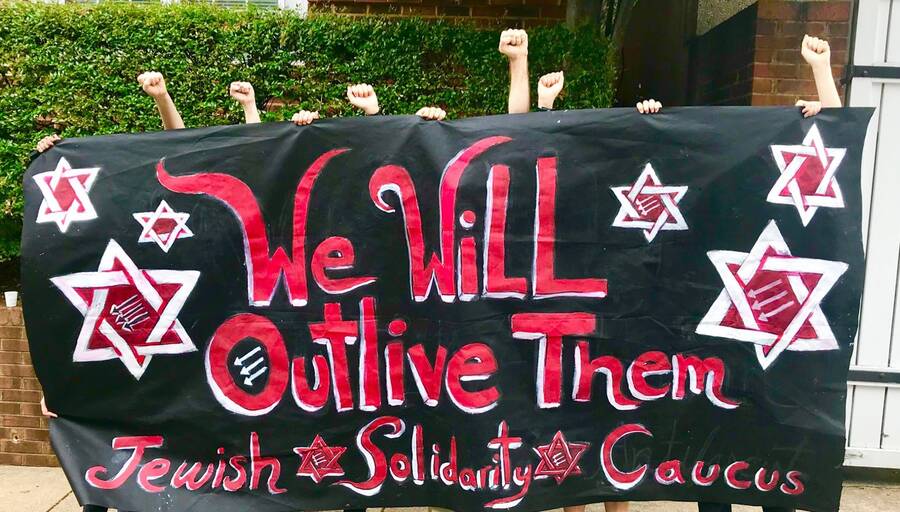 MEMBERS OF THE JEWISH SOLIDARITY CAUCUS (JSC) attended the counter-protests against Unite the Right 2.0 in Charlottesville and Washington, DC alongside the Muslim Jewish Anti-Fascist Front, Bash Back!, and Occupy ICE NYC. We feel compelled to remark specifically on our experiences in Charlottesville because of the mainstream media’s focus on the failure of the white nationalist rally in DC to the exclusion of the more complex and subtle events in Virginia.

In addition to participating in the March Against White Supremacy, the JSC came to Virginia to support and defend the Jewish community. We engaged with the members of Congregation Beth Israel, the Charlottesville synagogue terrorized by white nationalists at last year’s Unite the Right rally. We were also a visibly Jewish presence at the weekend’s anti-fascist demonstrations. This combination—joining with local Jews and with the larger coalition of counter-protestors—deeply moved us and solidified our organization’s mission of creating a Jewish socialist and anti-fascist organizing space.

For the whole weekend, downtown Charlottesville was a hyper-militarized area, barricaded by a police perimeter only accessible at two entrance points. Outside the synagogue, the city teemed with police, National Guard soldiers, checkpoints, undercover agents, and armored transports. The sound of helicopter blades beat overhead. Despite the city’s promise that there would be no unwarranted searches, downtown was in fact only accessible to those who submitted to an invasive and arbitrary search. Small objects like safety scissors were confiscated as “potential weapons,” despite the fact that stores inside the perimeter were selling some of the same items and holstered firearms were allowed. Large unmarked vans driven by police officers, presumably to enable mass arrests, prowled the city.

On Friday, August 10th, JSC members attended Erev Shabbat services at Congregation Beth Israel. We remembered the harrowing events of the prior year when the shul, wholly unprotected by police, was evacuated with the coordinated efforts of Jewish and non-Jewish counter-protestors as neo-Nazis marched outside with guns, giving the Nazi salute. This year, over 200 people attended services, including many non-Jews. The Rabbi spoke on the atmosphere of the weekend (“The opposite of hate is solidarity.”) and the need for courage in the face of white supremacy.

On Saturday morning, JSC members returned to Congregation Beth Israel. We drove into Charlottesville playing Paul Robeson’s rendition of the tribute to Warsaw Ghetto fighters, Zog Nit Keynmol, on the stereo. Once at the shul, a few of us went in for services while others stayed outside with a beautiful banner decorated with Stars of David, the anti-fascist Iron Front symbol, and the words “We Will Outlive Them.” Additionally, some of us wore Yiddish sashes and shirts from the Workmen’s Circle. We bore these signs of commitment to Jewish resistance, self-defense, and solidarity with other oppressed groups, irrespective of the risks of doing so in a town teeming with unseen white nationalists.

Those in the synagogue said the Mourner’s Kaddish for Heather Heyer and attended the oneg. Inside the temple, two topics, in particular, were discussed: the difficulty of recovery and healing since August 2017, and exhaustion with the military occupation in their town. Congregants overwhelmingly declined the armed security escort to their cars that the shul provided. On their way out, many took the opportunity to speak with us, thank us for our defiantly Jewish presence, and take photos of our banner.

Saturday evening, we attended the rally planned by student organizers from the University of Virginia, including Students United and Students Against White Supremacy. On our way there, we passed a single white nationalist surrounded by journalists, photographers and police protection. It was a testament to the media’s obsession with producing sensational click-bait about the alt-right, often uncritically providing a platform for their racist views.

Student activists rejected the narrow constraints imposed on their rally by the university’s administration (a small barricaded space, metal detectors, a limited number of attendees) by moving their rally from the Rotunda on the campus main lawn to nearby Lambeth Field. Policemen quickly swarmed the student group—cars with sirens blaring, lines upon lines of riot cops. After a brief speak-out, shouts of “March! March!” erupted from the demonstrators, and soon the group wove through the UVA campus and into the city of Charlottesville. Throughout the evening, the spirit of the group became more explicitly anti-capitalist and anti-fascist.

Despite our attempts to minimize the risks to our members and to our queer and trans comrades and comrades of color, it quickly became clear that Charlottesville was not a safe place for any of us; JSC decided to break off from the main march due to concerns about our members’ safety. Vans full of aggravated white men jeered at us when they drove by. A driver stopped near us, rolled his window down and angrily thumped the outside of his van. More than once we were followed by small groups on foot: some may have been undercover police, others we identified as attendees of last year’s Unite the Right rally. A man took photos of us before sprinting to his vehicle and speeding away. We stayed in groups at all times and eventually these people went away, perhaps in search of more isolated marks.

This weekend drove home the urgency of the task before us: to claim space to come together in solidarity with one another and with our siblings in other oppressed communities. When we took to the streets together in defiance of fascists and police, we took our safety into our own hands and showed that there is power in solidarity. It is with solidarity that we will defeat fascism. It is in the struggle for universal liberation that we as Jews we will be liberated.

A statement written by members of the Jewish Solidarity Caucus before traveling to Charlottesville and DC on the weekend of August 11 and 12 to stand with communities resisting fascist terror can be read here.

The Jewish Solidarity Caucus is an informal group of Jews organizing with Democratic Socialists of America. You can follow it on Twitter @solid_jews.