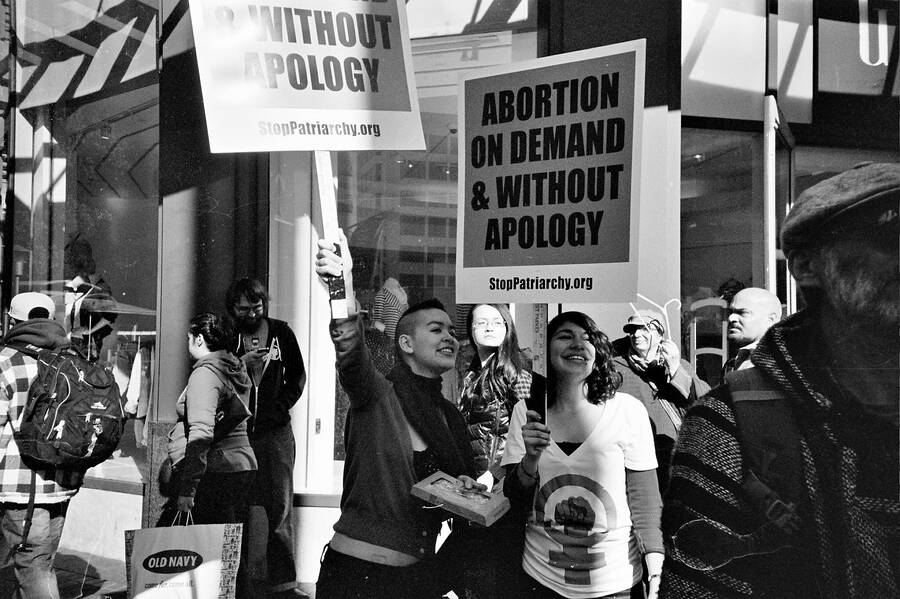 THE SUPREME COURT gave us abortion rights, and it can take them away. This is the fallacy at the heart of the uproar following the death of Justice Ruth Bader Ginsburg. It’s true that the situation is dire. Donald Trump’s nominee, Judge Amy Coney Barrett, will likely join five other anti-abortion ideologues on the Court in permitting states to restrict or ban abortion. Ten states already have laws triggering a ban if the Court permits it.

But we shouldn’t despair. The real power lies with the people, not the Court. The Women’s Liberation Movement raised consciousness, raised hell, and raised the banner for “Free Abortion on Demand” when abortion was illegal in all 50 states and considered criminal by the vast majority of the population. It was their organizing, not a wise and sympathetic bench, that led to the legalization of abortion nationally in 1973 with Roe v. Wade. We can start winning again if we rebuild our movement around the radical principles that forced the court to legalize abortion in the first place.

To do that, we must first understand how the movement’s tactics have changed since Roe was decided. Justice Ginsburg herself was famously critical of Roe precisely because she believed the decision foreclosed state and national legislative fights, and demobilized the movement that was igniting them. By 1973, the movement had already been diverted into less radical channels, but the Supreme Court decision likely pushed it further in this direction, as liberals seized on the Court’s legal arguments, replacing the bolder arguments that built the movement—such as free abortion on demand—with conservative reasoning such as “it’s our constitutional right,” and “abortion is a private decision between patient and doctor.” With this turn, abortion also became siloed from other, more radical feminist demands, such as rearranging the economy to value care work and wealth redistribution. For the last several decades, our movement has been dedicated almost exclusively to “saving Roe,” even though we’ve endured severely restricted abortion access since 1977, when the Court allowed Medicaid to stop paying for abortion with the infamous Hyde Amendment. Since then, the Court has allowed so many additional restrictions that legal abortion has been placed out of reach for millions. With Roe’s final demise on the horizon, it’s time to leave behind the apologetic language and methods of the post-Roe abortion movement, and to return to the radical strategies that gained us the most ground.

The Court based Roe in a right to privacy implied by the Bill of Rights and the Fourteenth Amendment, following its 1965 Griswold v. Connecticut decision legalizing contraception for married women. After Roe, this reasoning—and the general understanding of abortion as an issue of privacy—came to define the abortion movement. (As groups strove for respectability, they also started to avoid the A-word, replacing it with “choice.”) But the ’60s mass movement to repeal abortion laws relied on the opposite approach: taking abortion out of the private realm and making it public. The Women’s Liberation Movement wielded the slogan “The personal is political” to express the idea that personal and secret pain, for which women blamed themselves, had its roots in social structures and could be acted on in the public arena. In February 1969, after a year of consciousness-raising, during which they shared stories about their illegal abortions, women’s liberationists broke taboos when they disrupted a New York state legislative hearing on abortion reform. They loudly testifying from the floor about their own experiences, to the shock of the liberals on the panel, who went into private session and locked the activists out. A month later, the same group, Redstockings, held the first ever speak-out on abortion in a Greenwich Village church. Women’s fury and suffering burst into public view as feminists marched, picketed, and testified in public depositions about how they had been harmed by the law. By 1970, the legislature yielded to this firestorm, passing a sweeping legalization of abortion on demand in New York in the first two trimesters. The law became the model for Roe. Despite the now-dominant language of personal privacy, bold recent projects like Shout Your Abortion have taken our testimonies public again. Expanding these efforts will be essential to rebuilding our strength.

In the wake of Roe, pro-choice groups also departed from the original abortion movement by emphasizing that abortion is a matter “between a woman and her doctor.” Ginsburg considered this focus on “a doctor’s freedom to practice his profession as he thinks best” to be a flaw of the Roe decision, noting that the appeal to medical authority wasn’t “woman-centered,” but rather designed to reassure skeptics that women wouldn’t be making the decision to get an abortion alone. For the movement, meanwhile, the requirement that a doctor must perform the abortion represented a significant compromise, which drove up the price of the procedure and gave unnecessary power to doctors. Women’s liberationists were justly skeptical of medical authority. They organized self-help classes and even designed and built equipment to do menstrual extraction, a procedure that can end a very early pregnancy. It was feminist laywomen in the abortion underground who advocated the vacuum aspiration abortion method—which has become the gold standard—while most doctors were still using the more painful and hazardous dilation and curettage method. In Chicago, a collective of trained laywomen called Jane performed 11,000 safe, illegal abortions before 1973. When police raided one of Jane’s secret pop-up clinics in 1972, they kept looking around the apartment in vain for a male doctor.

Now, doctor requirements have become an obstacle to freeing up pill abortions, which account for a third of abortions in the US. Special FDA restrictions confine abortion pills to clinics; you can’t get them at a retail pharmacy, even though some experts suggest they could be safely provided over-the-counter. Shedding the doctor-centric rhetoric will put us in a better position to organize for the elimination of these unnecessary restrictions, which would make abortion cheaper and more accessible; in the meantime, we can strengthen existing underground efforts to provide pill abortions to those unable to access them, and circulate information about how to use them safely.

In another damaging concession, over the last several decades, pro-choice leaders have chosen to emphasize the most tragic cases in which abortions are necessary. This returns us to the timid strategy the abortion reform movement employed in the ’50s and early ’60s. Before the Women’s Liberation Movement burst on the scene, the doctors, lawyers, and clergy that led the reform movement focused on loosening laws in cases they assumed would be perceived as the most sympathetic and blameless: rape, health emergencies, fetal deformity. By contrast, the Women’s Liberation Movement specifically argued for repeal of all abortion laws. Abortion pioneer Lucinda Cisler argued in 1970 that it was the movement’s demand for repeal rather than reform that made it wildly popular:

Part of the reason the reform movement was very small was that it appealed mostly to altruism and very little to people’s self-interest: the circumstances covered by “reform” are tragic but they affect very few women’s lives, whereas repeal is compelling because most women know the fear of unwanted pregnancy and in fact get abortions for that reason.

Today, Planned Parenthood advertisements and state campaigns against restrictions are devoted to rape cases; cases where cancer treatments have to stop during pregnancy; and non-viable fetuses late in a pregnancy, when abortion is prohibited under Roe. But 30% of women get abortions—as do other people who don’t identify as women—and very few fall into these rarified categories. To change course, we should take a cue from Ireland. For years, Irish abortion campaigners were stuck in a similar rut, trying to get abortions for suicidal teenagers and others who might die without them. It was only when they started to raise the demand for “Free Safe Legal” abortion that their campaign took off; their organizing efforts led to the repeal of the country’s abortion ban in 2018.

A post-Roe legal environment will leave us with 21 states banning or severely restricting abortion, with 13 states and DC protecting it. Clearly, federal legislative action will be needed to make abortion available nationwide, and a Medicare for All system will be required to make that right universally accessible. But the Supreme Court could still rule any such law unconstitutional, allowing states to opt out. Ultimately, the legitimacy of the Court itself, which has always functioned as an undemocratic restraint on our legislature, must be challenged. In two previous national crises—when it defended the expansion of slavery and blocked efforts to end the Great Depression—the other branches successfully employed political attacks to override it. When it comes to that fight, our success will ultimately depend on how well we’ve built a movement base to force the political changes we need.

Jenny Brown is an organizer with National Women’s Liberation and author of BIRTH STRIKE: The Hidden Fight Over Women’s Work and Without Apology: The Abortion Struggle Now. Her work has appeared in Labor Notes, New Labor Forum, and Jacobin.