In other countries, the right clashes with the center over the basic nature of the state—but Israel’s Itamar Ben-Gvir and his rivals are on the same page about ethnocracy. 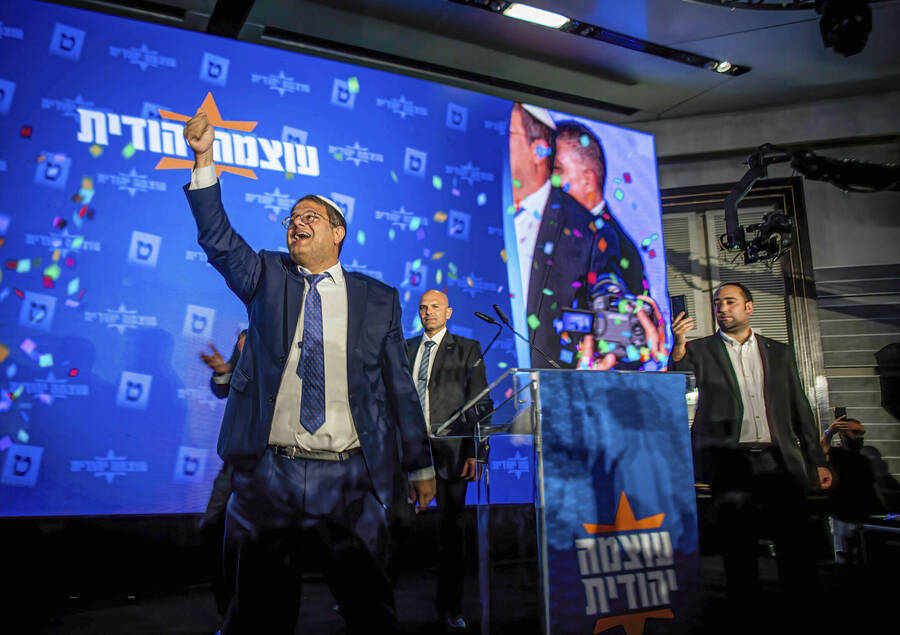 Now that Itamar Ben-Gvir appears poised to become a power broker in Israel’s next government, journalists are grasping for analogies with far-right upstarts in other lands. The Telegraph says he is “reminiscent of French hard-Right opposition leader Marine Le Pen.” Haaretz notes that “Americans are already viewing Ben-Gvir as a Trump-like figure.” According to The Guardian, “Ben-Gvir’s rise is reflective of wide authoritarian political trends around the world.”

The impulse to draw comparisons to figures like Le Pen, Trump, Italian Prime Minister Giorgia Meloni, and Indian Prime Minister Narendra Modi is understandable. Ben-Gvir—a follower of the late Rabbi Meir Kahane, whose party was banned in Israel for “incitement to racism” in the 1980s—is a media-hound and a racist; he delights in threatening violence, and he’s risen swiftly from the political margins to the corridors of power.

But these parallels are mostly wrong. Ben-Gvir is different because Israel is different. In France, the US, Italy, and India, right-wing leaders are seeking—to varying degrees—to create ethnocracies, states that define themselves as belonging to a dominant ethnic, religious, or racial group. Their centrist opponents—to varying degrees—support legal equality for all citizens. This divide creates deep ideological polarization. But Israel is not deeply ideologically polarized. It’s already an ethnocracy and no major political party wants to change that. That’s what sets Ben-Gvir apart from figures like Trump and Le Pen: His rivalry with his centrist foes may be politically fierce, but it’s not a contest over the basic definition of the state. In the global struggle between group supremacy and equality under the law, Ben-Gvir and his centrist rivals are on the same side..

To grasp what sets Ben-Gvir and the Israeli context apart, look at immigration, the signature grievance of Le Pen, Meloni, and Trump. Each has built a political brand on promising to stop migrants from the Global South from undermining their nation’s white, Christian character. Trump proposed a wall and a Muslim ban. Meloni desires a naval blockade to prevent migration across the Mediterranean. Le Pen wants to tighten asylum laws and end birthright citizenship so children born to migrant parents in France don’t gain legal equality. Immigration doesn’t enjoy the same political salience in India because it’s not as attractive a destination for migrants. But even there, Modi has tried to alter asylum laws to exclude Muslims, and thus bolster Hindu demographic dominance.

Ben-Gvir doesn’t need to propose these kinds of changes. He does fervently oppose admitting asylum seekers, but restricting migration to preserve Israel’s ethnic and religious identity hasn’t been central to his rise. The reason is simple: Israel already does that. As a Jewish state, it radically privileges Jewish immigration. Jews can move to Israel and gain citizenship immediately. For non-Jews, by contrast, moving to Israel and gaining citizenship is extremely difficult. For Palestinians whose families were expelled from what is now Israel, it’s impossible. Israel’s immigration policy is already more discriminatory than anything being proposed by Le Pen, Meloni, Modi, or Trump.

Ben-Gvir’s centrist rivals fervently support this status quo. In 2003, Israel passed a Citizenship Law preventing Palestinians from the West Bank or Gaza Strip who marry Palestinian citizens of Israel from thereby gaining citizenship themselves. The law has been extended every year since then. Last year, Benjamin Netanyahu’s Likud Party flirted with opposing the extension—despite favoring it substantively—as a ploy to try to topple then-Prime Minister Naftali Bennett’s multi-party coalition. In response, Israel’s centrist politicians maneuvered frantically to ensure that the extension passed. The Citizenship Law was vital, declared then-foreign minister Yair Lapid, because “it’s one of the tools aimed at ensuring Israel’s Jewish majority.”

This alignment on immigration reflects an alignment on the fundamental nature of the state. Lapid’s Yesh Atid Party constitutes the largest centrist rival to the right-wing coalition that now includes Ben-Gvir. But it unabashedly opposes Israel becoming a “state for all its citizens,” as proposed by Palestinian members of the Knesset, which treats Jews and Palestinians equally. Centrists like President Joseph Biden, France’s Emmanuel Macron, or Italy’s Mario Draghi may be imperfect champions of legal equality. But it’s impossible to imagine them stating, as Lapid did in 2019, “I am, and I have been, against any kind of ‘state of all its citizens’ my entire life.” In India, one of the deepest political cleavages concerns the opposition of the Congress Party—which remains, despite its waning fortunes, the largest rival to Modi’s ultra-nationalist Bharatiya Janata Party (BJP)—to Modi’s efforts to create a Hindu state. The Congress Party declares on its website that India must stay a secular state that “does not allow itself to be attached to one faith or religion.” In Israel, by contrast, the need to preserve a Jewish state is a matter of political consensus. On the virtue of ethnocracy, the right and center utterly agree.

In the past, they at least differed on where to draw the Jewish state’s borders: The right wanted to hold all the territory between the Jordan River and the Mediterranean Sea; the center wanted to leave most of the occupied territories and thus divest itself of a Palestinian population that threatened Israel’s Jewish majority. But even that division has faded. For Lapid and Israel’s other leading centrist politician, Benny Gantz, support for a Palestinian state is now almost entirely theoretical. It’s freighted with prerequisites that ensure such a “state” would constitute little more than a glorified version of the status quo, in which the Palestinian Authority performs administrative tasks while the Israeli army retains ultimate control. This means that, functionally, they support a Jewish state from the river to the sea. When the conservative political commentator Dan Senor recently noted that despite Israel’s apparent polarization, “on the actual issues there’s pretty broad consensus,” this is what he meant: No Israeli party with a shot at taking power supports the egalitarian principles that hold sway in centrist and progressive circles in countries like the US, Italy, India, and France.

That’s not to say that Ben-Gvir and Lapid agree on everything. But their disagreements are different from those between Le Pen and Macron or Trump and Biden. The most significant divide between Ben-Gvir and Lapid isn’t about immigration; it’s about deportation. Lapid does not support expelling Israel’s Palestinian citizens. Ben-Gvir, on the other hand, has since adolescence revered Kahane, who argued that Jewish supremacy could never be secure so long as Israel retained a substantial Palestinian population. A Jewish state, wrote Kahane in his 1981 book, They Must Go, requires “a permanent Jewish majority and a small, insignificant, and placid Arab minority. But the Arabs believe that the Jews are thieves who stole their land. The Arabs feel no ties to or emotions for a state that breathes ‘Jewishness.’ And they grow.”

The same anxiety underlies Ben-Gvir’s agenda today. Unlike Lapid, who believes Israel’s ethnocracy is stable, Ben-Gvir believes it is weak. It is weak because Israel’s Palestinian citizens are too numerous and insufficiently subservient. “The time,” he declared on election night, “has come for us to reassert ownership of this state.” Unlike Kahane, Ben-Gvir does not call for expelling all of Israel’s Palestinian citizens, just the “disloyal” ones. But during the campaign his party ran ads featuring the faces of two of Israel’s most popular Palestinian politicians alongside the words “May our enemies be banished.” Ben-Gvir’s notion of disloyalty is expansive. Whether or not he believes he can expel Palestinian citizens from the country, the threat serves a purpose. It bolsters Israeli ethnocracy by warning that Palestinians may face harsh reprisals if they challenge it. Lapid does not consider such threats necessary. He might even consider them counterproductive, since they could lead international observers to question the legitimacy of the Jewish state that both he and Ben-Gvir support. But ultimately, Lapid’s objection is to Ben-Gvir’s methods, not his end goal.

Analysis
For the Biden Administration, There Are No Red Lines On Israel
At the J Street Conference this past weekend, Secretary of State Antony Blinken delivered a speech fit for AIPAC.
Peter Beinart
Analysis
Progressive Groups Need a New Approach to Fighting AIPAC
Unless left-wing groups band together, Congress will grow even more hostile to Palestinian rights and other progressive priorities.
Peter Beinart

Analysis
For the Biden Administration, There Are No Red Lines On Israel
At the J Street Conference this past weekend, Secretary of State Antony Blinken delivered a speech fit for AIPAC.
Peter Beinart
Analysis
Progressive Groups Need a New Approach to Fighting AIPAC
Unless left-wing groups band together, Congress will grow even more hostile to Palestinian rights and other progressive priorities.
Peter Beinart
Sign up for our email newsletter, featuring exclusive original content
Want original reporting and analysis on Israel/Palestine?
Sign up for the Tuesday News Bulletin.