The anti-occupation group is holding the 2020 contenders accountable on Israel/Palestine. 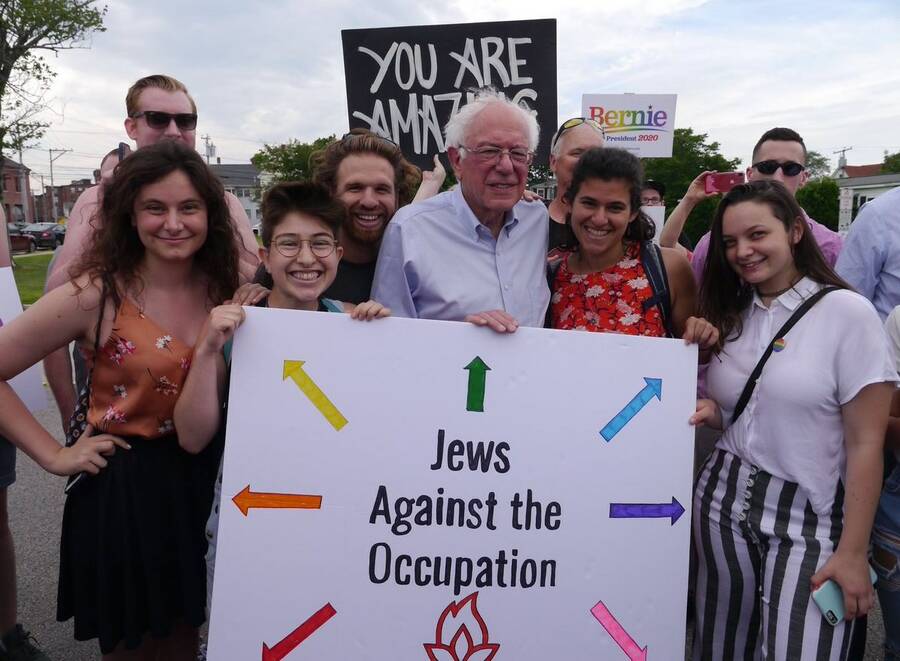 SINCE ITS FOUNDING IN 2014, IfNotNow has taken on a big target: the American Jewish establishment’s support for Israel’s occupation of the Palestinian territories. But now the progressive Jewish group has a new, even bigger target: the 2020 Democratic presidential candidates’ support for the traditional US-Israel alliance.

“There’s an opening in the Democratic Party to pursue a break from the AIPAC-created status quo and pursue policies to push the Israeli government to actively pursue freedom and dignity instead of a politics of endless occupation,” says Emily Mayer, the national coordinator at IfNotNow.

To that end, seven IfNotNow fellows are now living together in a “movement house” in New Hampshire, where they’re planning their strategy for getting Democratic presidential candidates to speak out against US support for Israel’s occupation as they roll through the first primary state.

While IfNotNow doesn’t plan on endorsing any particular presidential candidate—its membership is divided on whom to support, and they want to push all the candidates, rather than focus on one—Mayer says they might endorse congressional candidates down the line.

By moving into electoral politics, the group's leadership intends to combat the GOP’s conflation of antisemitism with criticism of Israel and to make the question of US support for the occupation a core campaign issue that Democrats must address as they look to win voters’ support.

Mayer says that IfNotNow will publicly confront Democratic presidential candidates and ask them what their plan is to address Israel’s 52-year military occupation of the Palestinian West Bank, East Jerusalem, and Gaza, as well as question them about Israeli laws that render Arabs living within Israel’s pre-1967 borders second-class citizens. However, their questions won’t touch on other core issues surrounding the conflict, like Palestinian refugees’ right of return or potential cuts to US military aid to Israel. These omissions are in line with IfNotNow’s broader strategy of focusing solely on the American Jewish establishment’s support for Israel’s occupation. Some Palestine solidarity activists have questioned this decision.

Getting Democratic leaders to challenge Israel’s occupation represents a different strategy than J Street, the liberal pro-Israel group that has directed much of its energy toward electoral politics. J Street requires candidates it endorses to support a two-state solution and the US-Israel alliance and to oppose the Boycott, Divestment and Sanctions (BDS) movement—positions in line with the pro-Israel consensus that IfNotNow is trying to disrupt. In addition, notes Mayer, J Street does much of its work in closed-door meetings with congressional staffers, while IfNotNow prefers a much more public and confrontational approach.

IfNotNow’s entry into presidential politics comes at an opportune time. Donald Trump’s tight alliance with Israeli Prime Minister Benjamin Netanyahu, alongside a recent wave of grassroots organizing, has led a growing number of Democrats to question Israeli policies—a marked break from years of no-strings-attached support for the Jewish state as it expanded illegal settlements on Palestinian land and entrenched a separate and unequal regime that tramples on Palestinian human rights.

IfNotNow got its first taste of the presidential campaign trail on June 29th, when members of the group went to a Bernie Sanders event in New Hampshire and asked the candidate to take a photo behind a sign reading “Jews Against the Occupation.”

“When we asked Bernie to take the photo, he looked at the sign, thought about it and said yes. That felt like a huge moment for me,” says Aviva Schwartz, a 27-year-old IfNotNow member who is one of the fellows living in New Hampshire for the summer. “He really believes in being Jewish against the occupation.”

The photo with Sanders, as significant as it was, might prove to be IfNotNow’s easiest victory. Sanders has stepped up his criticism of Israel in recent years, acknowledging in a 2017 speech that Israeli forces drove Palestinians from their homeland in 1948 and saying, in an address this year to the American Jewish Committee, that the “Palestinian people [are] crushed under a military occupation now over a half century old, creating a daily reality of pain, humiliation, and resentment.”

But IfNotNow has its work cut out for it when it comes to Sanders’s Democratic rivals. When speaking about Israel, most of the leading presidential candidates have either limited their criticism to Netanyahu himself or stuck to classic bromides about Israeli democracy and the need for a two-state solution. Elizabeth Warren, for instance, told the New York Times in June that “Israel is in a really tough neighborhood” and is a “liberal democracy” that is “a strong ally,” while voicing perfunctory support for a two-state solution. And in his address to the American Jewish Committee last month, Joe Biden said that the US-Israel relationship is about “the kinship, the connection, the values that Americans and Israelis share,” and placed the burden on the Palestinian leadership to support a two-state solution, even though Netanyahu has rejected an independent Palestinian state.

IfNotNow members say they’re looking to capitalize on the disconnect between, on the one hand, positions like Warren’s or Biden’s, and on the other hand, how the Democratic base feels about Israel. Multiple polls released over the past six months have shown Democratic sympathy for Israel markedly drop.

But the members currently stationed in New Hampshire are also realistic about what they can achieve in a single summer.

“I know some candidates are stuck in their beliefs and aren’t going to budge very much on this issue. But it’s my job this summer to push them,” says Emma Glazer, one of the IfNotNow fellows in New Hampshire and a rising junior at Bryn Mawr College. “I don’t have a number of candidates to talk to [in mind] or things I want them to say. But I definitely want to feel I made this issue a central issue—an issue where, for those who were not keyed into Israel/Palestine, they [now] look out for that in their candidates.”

Report
A Hebrew Teacher Called Herself an Anti-Zionist. She Was Fired.
A complaint arguing that a Reform synagogue violated New York labor law could point toward a new strategy for Palestinian rights advocates.
Isaac Scher
Report
Jamaal Bowman’s Trip to Israel Sparks Debate in DSA Over Electoral Strategy
The congressman’s divergence from DSA’s line on Israel/Palestine has led the socialist group to reexamine its approach to endorsements.
Alex Kane