A new documentary asks: Has Brazil’s democracy been merely a passing dream? 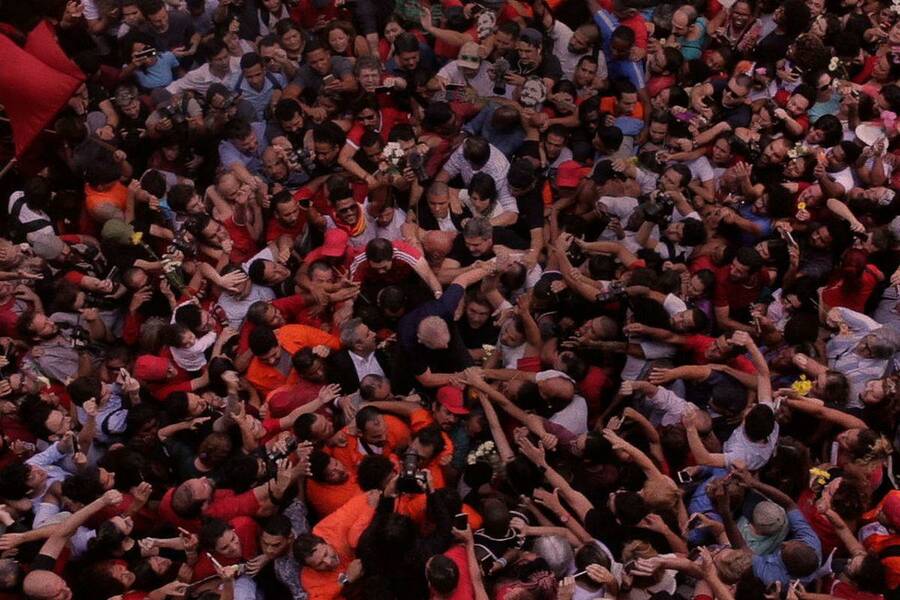 A still from The Edge of Democracy. Image courtesy of Netflix.
Tweet Copy Link Email Print

IN HER THRILLING, INCISIVE, AND THOUGHT-PROVOKING new documentary The Edge of Democracy (out on Netflix now, and with theatrical runs in select cities), director Petra Costa asks: Have the past 35 years of restored democracy in her homeland of Brazil been merely a passing dream? The events of the last few years—from the revelations of all-pervasive corruption, to the impeachment of President Dilma Rousseff, to the jailing of former president Lula da Silva, to the election of aspiring authoritarian leader Jair Bolsonaro—have sharpened her question in a way that, given the global far-right resurgence, resonates around the world.

At 35, Costa is just slightly older than the democracy that was restored in 1985, after a 1964 military coup put an end to its previous iteration, and her family history makes her perfectly situated to analyze what has happened in Brazil since the 1960s. Her parents were members of the Maoist-leaning Partido Comunista do Brasil (not to be confused with the formerly Soviet-line Partido Comunista Brasileiro). As we learned in her earlier film Elena, a poetic and deeply haunting portrait of her older sister, it was her mother’s pregnancy with that sister that saved them from participating in the disastrous Araguaia guerilla movement, which resulted in the death of almost all of its fighters. Instead, Costa’s parents lived underground for years. In The Edge of Democracy, the joy on Costa’s mother’s face in footage shot in 2002, when Workers’ Party (Partido dos Trabalhadores, or PT) founder and leader Luiz Inácio Lula da Silva—better known simply as Lula—was elected president is a touching reminder of how long and difficult the struggle for democracy was. The threat of another death of Brazilian democracy thus has a special poignancy for Costa.

The massive corruption revealed in the “Operation Car Wash” investigations—which began with a 2008 accusation, and which ultimately revealed that bribes and kickbacks to government officials were a constitutive part of obtaining contracts with the state-run Petrobras oil company, among others—made public the rot in the Brazilian political system. This revelation, beyond causing the jailing of many individual businessmen and politicians, ultimately took down the once squeaky-clean PT, and set off the out-of-control spiral of events that The Edge of Democracy so brilliantly traces. Though the PT and Lula, Costa tells us, had lifted 20 million people out of poverty and enabled millions who’d been blocked from attending schools to do so, they were now viewed by many as just another party, playing the game in the same way that Brazilian political parties always have. This shift was a critical step in the erosion of belief in Brazilian democracy.

Though Costa never underlines this fact, it is always fairly easy to guess the political opinions of those attending the various demonstrations and rallies featured in the film before they open their mouths. If they’re white, fulminations against Lula and Rousseff will follow; if they’re nonwhite, it’s a pro-PT crowd. The image Brazil has sometimes projected of being a kind of utopic, post-racial democracy is undermined by the breakdown of peoples’ reactions to the events of the past few years along familliar fault lines. It is an unspoken but important takeaway from The Edge of Democracy that the class divide in Brazil is also a racial one.

The film’s central event is the impeachment of President Rousseff. In an atmosphere poisoned absolutely by political hatred, the right ostensibly impeached her because she violated budget laws. But as the proceedings revealed, the impeachment was really based on the decline of the Brazilian economy—a use of the impeachment procedure unforeseen by the Brazilian (or any other) constitution. But hatred makes many things possible: Rousseff was soon out.

The corruption involved in the impeachment was later revealed, but regardless, it was a dangerous step in the decline of democracy, correctly condemned by Rousseff’s supporters as a coup in disguise. Indeed, her ejection from office—to be replaced by her right-wing vice president, Michel Temer, a far more corrupt politician—further emboldened the left’s enemies and increased their bloodlust for Lula, who is constantly depicted by his foes, including those in the press, as the devil incarnate. The stage was being set for the rise of Jair Bolsonaro, a retired army captain who celebrated the torturers of the likes of Rousseff and other leftist guerillas in the 1970s.

The Edge of Democracy’s tone is sorrowful, nearly hopeless. Watching the film, it’s impossible not to empathize with Costa’s despair. She has said that this film had its genesis in her viewing of The Battle of Chile, Patricio Guzman’s account of the events leading up to the military overthrow of Salvador Allende’s democratically elected socialist government in Chile in 1973. Witnessing both the enthusiasm and hatred inspired by Allende and his government—and the bloody coup—led Costa to reflect on the state of Brazilian democracy. The similarities between the two periods are striking. In both cases, the leaders of the progressive forces were far more dedicated to democracy than their opponents. In The Edge of Democracy, Lula speaks several times about how he could have achieved power through a revolution, which would have led to the suppression of the free press, but he chose the electoral path instead, in order to preserve democracy. This was a point of pride for him. Allende, too, never strayed from the parliamentary road, though he was attacked from the left for doing so. Both men, as we see in the two films, were treated as providential figures by their admirers, and as the embodiments of evil by their opponents.

This is where the differences between the two periods become important—and it’s where we can, perhaps, find something positive in The Edge of Democracy. Democracy in Chile truly came to an end on September 11th, 1973, when the presidential palace was attacked, and the president, refusing to surrender, committed suicide. In the years that followed, before democracy’s return, thousands would be killed and disappeared. The hundreds of thousands who chanted, “Allende, Allende, el pueblo te defiende” and “El pueblo unido jamas sera vencido” had been silenced.

In Brazil, despite the recent horrors that The Edge of Democracy documents, no coup occurred, and elections continued in 2018 as planned. Tellingly, too—and this is something to which we Americans should be acutely sensitive—in Brazil, demonstrators on the left continue to march loudly, freely, and en masse, a sight seen too infrequently here, where the daily horrors inflicted by Trump and his epigones generally elicit no more than grumbling, angry editorials, and the vague threaten of congressional hearings. Might it be that our democracy is more ailing than Brazil’s? Seeing The Edge of Democracy reminded me that in France, where people also don’t hesitate to take to the streets to protest government measures, every movement is a new May ’68—a case of people taking power into their own hands. Here in the US, we leave it all to the courts—or, God help us, Congress—so everything is another Watergate—that is, another top-down event in which we sit in front of our screens and hope for the best.

When Bolsonaro was elected, I wrote my friend João Moreira Salles, a Brazilian filmmaker and editor of the progressive magazine Piauí. He was, of course, disappointed by the results, though not shocked. Most importantly, he told me he did not fear for Brazil’s future. The guarded optimism of his reply came as a surprise:

Our civil society is vibrant, our press is free and fierce, the 2013 protests—in spite of all their destabilizing consequences—produced a wealth of new political movements (feminism, gay rights, black movement), and so it is not easy to do here what we see in other countries. We will not accept silently a regression into authoritarianism. That doesn’t mean that it won’t happen, just that it won’t happen without a fight.

Indeed, a fight is needed. But even as the situation in Brazil reaches depths thus far unrealized in the US, Bolsonaro’s popularity is on the wane; when the time comes for him to go, he will, it seems, be removed democratically. The ugliness he’s wrought will scar Brazil (as Trump’s presence will scar the US). But despite the setbacks and villainies Costa’s film so brilliantly and cogently lays out, democracy will (likely) still be standing, if unsteadily, in Brazil. The Edge of Democracy will have a long life as a testament to how difficult its survival was.