Who do Jewish institutions actually serve? 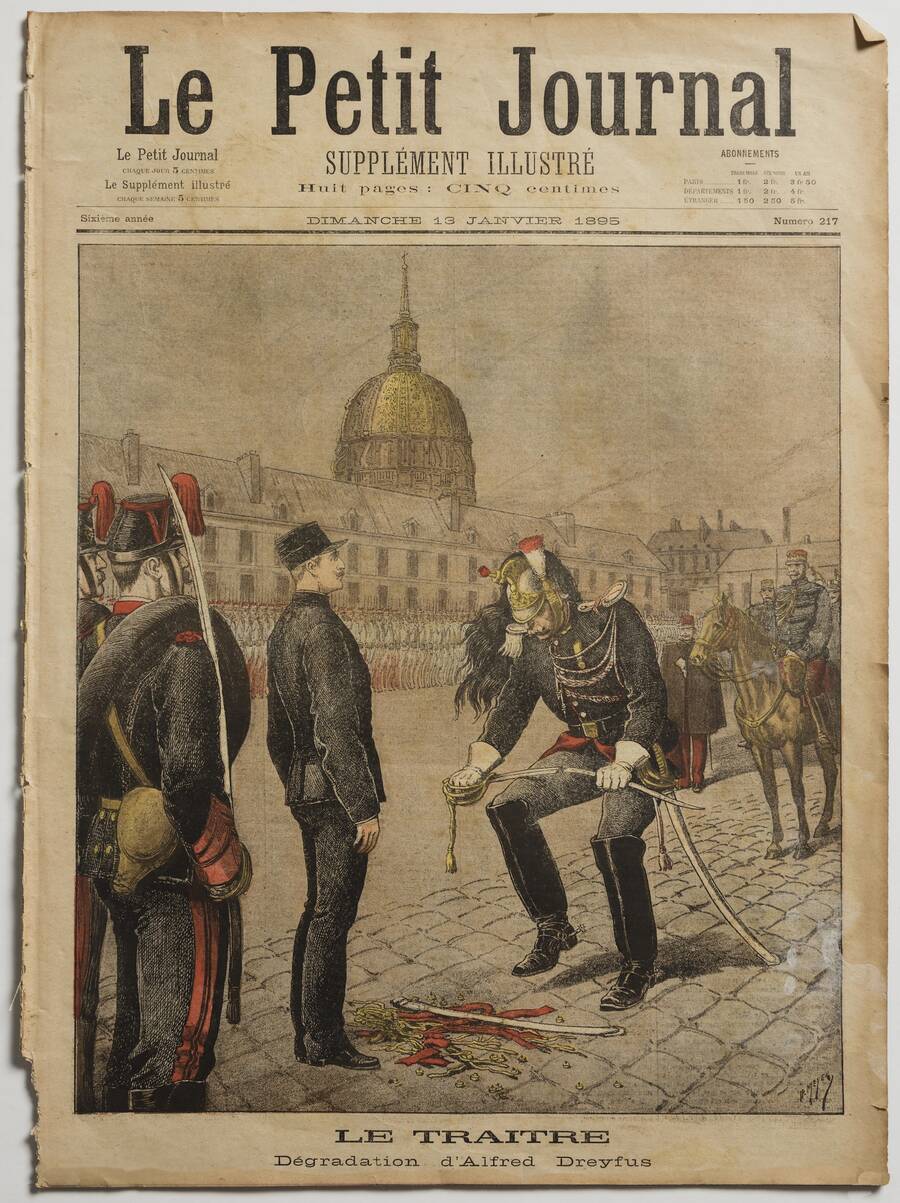 The Traitor: Degradation of Alfred Dreyfus by Henri Meyer on the front page of Le Petit Journal, January 13th, 1895.

This is the first editorial in our new column, Responsa, in which members of the Jewish Currents staff weigh in on pressing contemporary issues.

IN 2003, when I was 12 years old, I sat in a circle with a few dozen other campers at my Jewish and ardently Zionist summer camp. It was hot and muggy, as it was every summer in the Appalachian Mountains. A counselor asked us, “If America and Israel went to war against each other, which side would you be on?” I remember well the dusty wooden floor of the “Bet Ha’am,” the “House of the Nation,” where the activity was held. I do not remember thinking the question was strange, nor do I remember my answer—probably because this kind of question was asked at my camp all the time.

My comically right-wing summer camp didn’t own this line of thinking. In a recent essay on Zionism and diasporism in Philip Roth’s Operation Shylock, writer and Jewish Currents editor Ari M. Brostoff recalls being asked to perform the same exercise at Camp Ramah, a mainstream Jewish summer camp affiliated with the Conservative movement. In neither case did the activity end with a call to sedition—just the persistent implication that we could only be safe somewhere else, far away.

Antisemites have long used the idea of Jewish “dual loyalty”—to the Soviet Union, to Israel, to some kabbalistic conspiracy—to stoke anti-Jewish hatred. But sometimes the establishment Jewish community itself manufactures the accusation that Jews don’t belong. When, at a “Progressive Issues Town Hall” in Washington, DC, earlier this year, Congresswoman Ilhan Omar questioned the role of political organizations pushing congresspeople toward “allegiance to a foreign country,” she was immediately attacked by many in the media and mainstream Jewish community for resurrecting the venerable trope of Jewish disloyalty.

For many of the managers of Jewish communal and political life, it seemed of little importance that Omar’s remarks about allegiance—directed squarely at lobbying organizations and her own fellow legislators—weren’t aimed at Jews, in the collective sense, at all. In a Times of Israel blog post, American Jewish Committee Chief Advocacy Officer Daniel Elbaum creatively interpreted her remarks as claiming that “Jews buy off members of Congress” and that Omar “questioned Jews’ loyalty to America.” Anti-Defamation League CEO Jonathan Greenblatt went so far as to push House Speaker Nancy Pelosi to condemn Omar’s remarks, spurring President Trump to launch his own fusillade against the congresswoman. Perhaps predictably, speakers at the AIPAC conference just a few weeks later dedicated entire sessions to attacking her.

Fear of the charge of dual loyalty resides near the heart of the contemporary American Jewish experience—at least the version of that experience narrated by the Jewish establishment. The accusation is frightening because it reflects both something true and something false about many of us. Are American Jews in fact “dually loyal”? Granted, as my summer camp exercise indicates, many Jews—though far from all—are torn between America and Israel. Our bimas are adorned with Israeli and American flags. Our institutions are saturated with arguments about the supposed primacy of Israel in our lives. By any measure we are devoted Americans—and every morning, “Hatikvah” is sung with the Pledge of Allegiance at Jewish day schools around the country. Of course, none of this is “dual loyalty” in the conspiratorial sense; no cabal directs Jews toward sedition or violence, nor is there some grand plan to turn Jews against their neighbors. Our mainstream institutions have simply internalized the antisemitic idea that we aren’t supposed to be here.

This internalized sense of unbelonging is partly rooted in a myth the Jewish mainstream tells itself and forces on the rest of us via its educational institutions. It’s the version of our history I learned in summer camp that sought to prepare me for an imaginary American–Israeli war. The myth goes something like this: After the holdout on Masada, Jews spent a chilly millennium and a half confined in the shtetl, languishing under religious dogma and antisemitic oppression. Life consisted of potatoes and davening. Then, Jewish enlightenment thinkers walked us out of the dingy ghettos and into the shining light of rationalism and civic duty. George Washington wrote a letter saying nice things about Jews. Napoleon issued an emancipating edict. We were set free. And off we set to succeed under capitalism.

In the 19th century, the myth continues, Jewish identity became split between the European secular state and an imagined Jewish national home, a state just for us. While Jews banged on the door of liberal societies and begged to be let in, Jewish French army captain Alfred Dreyfus had his epaulettes torn from his shoulders, dishonored as a traitor despite his military service. From a mythic balcony above, Zionist founding father Theodor Herzl realized the futility of emancipation in Europe and created the foundations of a Jewish state from his dreams. Every upright and free-thinking Jew headed there immediately to at last realize the messianic values of loyalty and citizenship. Everyone who stayed behind died without even the potatoes and davening to comfort them.

This simplification of our forebears’ struggles frames only two options for the contemporary Jew: assimilate in an attempt to escape Jewishness, or embrace Jewish ethnonationalism. Option One offers Jews the same old Napoleonic bargain of civic emancipation. Napoleon himself understood the terms of that bargain better than we: “Once part of [the Jewish] youth will take its place in our armies,” he wrote in an 1806 letter to the minister of the interior, “they will cease to have Jewish interests and sentiments.” This is the cost of conscription into unmitigated national loyalty, and always has been. Option Two is suspiciously similar to Option One: the same arrangement, emblazoned with a Jewish star.

We live with the legacy of that arrangement today—including in the form of the establishment Jewish organizations that purport to know what’s best for American Jews. Institutions like the Anti-Defamation League (ADL) and the American Jewish Committee are modern-day incarnations of the Jewish Consistory, a body Napoleon assembled in order to better control the Jews of 19th-century France. The Consistory represented the Jewish population to the government and did the work of the imperial power in the Jewish community. Today, most of our community’s mainstream communal and political institutions serve essentially the same function: mediating between “the Jews” and the imperium. By prioritizing the interests of the status quo, these institutions are not designed to lead the Jewish community, but to manage it.

The problem facing our communal managerial class is that they’re stuck in the middle. Instead of either making aliyah or fully assimilating, they remain here in diaspora while operating under the anti-diasporic understanding that the myth requires: everyone is against us, and collective liberation is impossible. How is it possible for Jews to be both model American citizens and simultaneously prepared to climb back atop Masada? This incoherent duality leads some mainstream Jewish communal leaders, and their dwindling constituents with them, to ricochet between assimilation and Jewish survivalism. The common denominator between these poles is fear; in the minds of our managers we are all Dreyfuses in waiting, biding our time for the inevitable day our epaulettes are ripped from our shoulders. This paranoid perspective is why the managers of the Jewish community can look upon the faces of Ilhan Omar, or Marc Lamont Hill, or Angela Davis, and see the specter of Hitler.

Of course, if we lived in a truly free country, managerial Judaism could not exist, because there would be no imperial center or capitalist system granting it authority. And as the status quo has become less stable, things have also gotten harder for the American Jewish managers. Together, the failures of American tolerance under capitalism and the exacerbation of the Israeli occupation of Palestine weaken reverence for both countries and jeopardize the very myth that the managers rely on; more and more of us refuse to either don the epaulettes or flee to Zion. In other words, Jews are not currently under existential threat, but the managers are. If Jews make common cause not with any state, American or Israeli, but with people oppressed by both the state and by capitalism, the managers will be out of a job: after all, such solidarity prefigures a world in which they don’t exist. The precarity of their position is why they’re so fearful of any interrogation of their purpose, of honest conversation about Israel, or, for that matter, of socialism, which was villainized at this year’s AIPAC conference.

What will replace this situation? While the friendship between Trump and Netanyahu reminds us of the fact that Israel and America will never go to war, the same crises that give us the opportunity to ramp up the fight for a just future also give fuel to the extreme right. Perhaps we are on the cusp of a radical transformation. Or perhaps the tide of Jewish progressivism will give way to a more complete embrace of ethnonationalism, as has happened in Israel. Luckily, local and national progressive Jewish organizations across the US have for years been building alliances across divisions. A burgeoning avant-garde is creating new Jewish forms of life that do not rely on the old myths and self-understandings. We don’t yet know the precise shape of the communal and political institutions we are building in the rubble of the old—but we do know they must be based in solidarity, and not in fear.

Responsa
Beyond Grievance
Though it may be a potent political tool, grievance can also maintain our investment in our own oppression.
Arielle Angel
Responsa
On Loving Jews
For Jews engaged in Palestine solidarity work, what might be gained by refusing excommunication from our own communities?
Arielle Angel

Slow Burn: Quarantine Edition
Exodus: Yitro
What does it mean that we do not consent to our ethical obligations?
Jacob Plitman
Conversation
Making History, Blintzes, and Trouble
Longtime leftist activists Dick and Mickey Flacks reflect on their lives, their work, and their new memoir.
Jacob Plitman
Sign up for our email newsletter, featuring exclusive original content
Short on time?
Sign up for our weekly Monday roundup of everything you missed in Jewish Currents last week.