The Dual Conspiracies of the J20 Prosecution 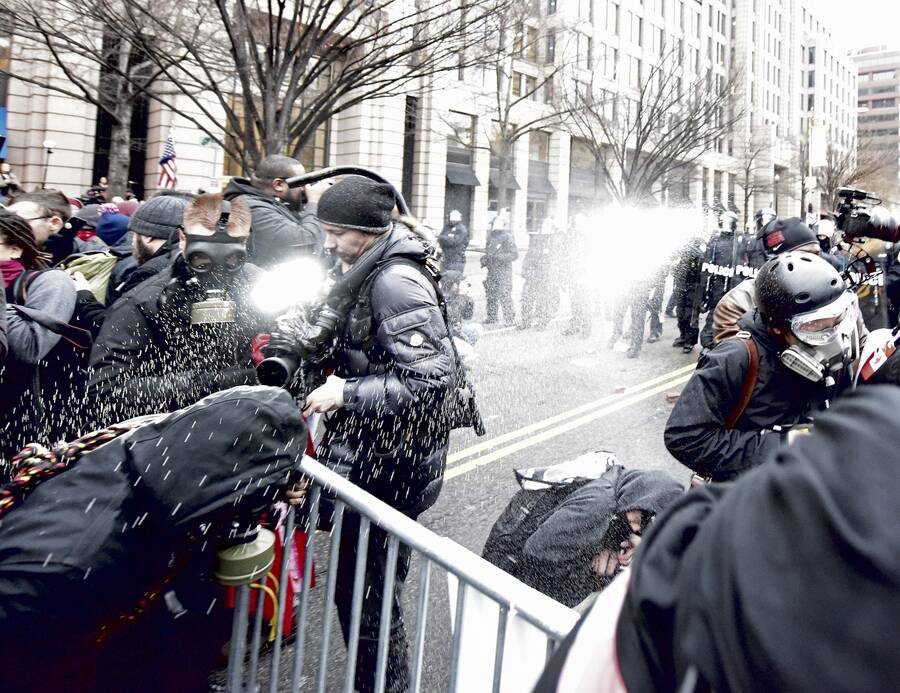 THERE ARE TWO CONSPIRACIES at the heart of the ongoing prosecution of Inauguration Day protesters, known as the J20 case. The first is the one conjured by the government in its charging documents: that of black-clad anarchists, linked by ideological and aesthetic unity, conspiring to commit acts of “violence and destruction” in downtown Washington, DC on January 20th, 2017. The other conspiracy, less remarked upon by the press, is that of the DC police, the US Attorney’s Office, and various far-right groups, collaborating to arrest and prosecute hundreds of anti-Trump dissidents.

Last April, the United States Attorney’s Office for the District of Columbia indicted some 212 people with inciting and engaging in a violent riot during Donald Trump’s inauguration. These defendants—journalists, medics, and protestors among them—were charged with eight felonies and faced 80 years in prison, all for attending a protest at which a handful of windows were smashed, some trash cans were overturned, and a few buildings were defaced with graffiti.

The original indictment is an unnerving artifact. Only a few dozen defendants are named as having personally participated in vandalism. The vast majority of those charged are only guilty by association: by “willfully combin[ing], conspir[ing], confederat[ing] and agree[ing] to engage in a riot,” the defendants are each individually liable for the unlawful acts committed by any other member of the group.

These words and their implication of collective action undergird the state’s theory of the case. Individual acts are beside the point; groupness itself is on trial. As the lead prosecutor, Assistant US Attorney Jennifer Kerkhoff, said at a hearing in July 2017, “A person can be convicted of rioting when they themselves have not personally broken a window or personally thrown a rock . . . It’s the group that’s the danger. The group that’s criminal.”

The appeal of this approach for prosecutors is no mystery: conspiracy law vastly lowers the standard of proof for scoring convictions. The actions which constitute participation in a conspiracy, “overt acts” in legal parlance, need not themselves be illegal. In the case of gang policing—increasingly conducted using conspiracy liability as well—prosecutors link individuals to a criminal conspiracy on the basis of utterly innocuous behavior: wearing particular clothes, flashing particular signs on Instagram, having certain tattoos, conversing with certain people.

An instructive comparison to the J20 prosecution took place two years ago in New York. Before dawn on April 27th, 2016, an army of NYPD officers and federal agents swarmed the Eastchester Gardens projects in the North Bronx. Sleeping children were dragged from their beds by armor-clad storm-troopers. Ultimately, 120 young men were arrested and indicted, some of whom were already incarcerated for other crimes. Deploying the 1970 Racketeer Influenced and Corrupt Organizations (RICO) Act, the Bronx 120 were held collectively liable for eight murders, and a handful of gun and drug charges. Members of the group, whose average age is 24, were linked together not by a shared plan to commit violence, but by their connections to one another: who they knew, who they hung out with, who they played cards with, who they were connected to on Facebook.

“Conspiracy law was meant to get at when people make a concrete agreement to commit certain kinds of crime, not when they join a group that’s in their neighborhood,” Babe Howell, a criminal law professor who has studied the NYPD’s internal “gang list,” told The Intercept in 2016. “You can’t exist in certain neighborhoods without belonging to your block’s crew. Unless you’re going to be locked inside all your life, and even that may not be enough.”

In short, conspiracy law takes the things that constitute belonging and reformulates them as evidence of an agreement to commit crimes. In many communities, conspiracy effectively criminalizes belonging itself.

In the case of the J20 defendants, the overt acts listed in their indictment include gathering for the march in Logan Circle, wearing black or dark clothing, covering their faces, moving together as a group, and chanting anti-capitalist slogans like “Fuck it up,” “Fuck capitalism,” and “Whose streets? Our streets.” These aren’t crimes, of course. They signal allegiance to a political ideology or identity—anti-capitalism, anarchism. In the eyes of the state, however, expressions of solidarity are admissions of guilt.

THE DIFFERENCES BETWEEN the J20 defendants and the Bronx 120 are important. The Bronx 120 are primarily black and working class; the J20 defendants are mostly white and, while not necessarily affluent, many of them have had access to resources—pro-bono legal representation, networks of support, sympathetic media—that their Bronx counterparts did not. Moreover, the crimes associated with the Eastchester Gardens raid are of a different magnitude. The violence in the North Bronx, and NYC public housing in general, is real and often deadly; some residents welcomed the raids.

But there’s a resonance between the cases that shouldn’t be missed, and has little to do with actual similarity among the defendants. Rather, it has to do with the way the state sees them. In court documents, the J20 defendants are rendered as a dark, disruptive force. Prosecutors describe them as a “sea of black” snaking through the streets of the capital, leaving destruction in their wake. Prosecutors have repeatedly sought to introduce expert testimony about anarchist extremism, Antifa, and the black bloc—rendering the defendants as members of a violent sect, with its own codes, rules, and aims.

Conspiracy charges rely on painting a sinister picture of an underculture whose norms are foreign and menacing. The group must be more fearsome than the individual, whose guilt or innocence is immaterial. Allegiance to the group is enough. Membership must signal some deep betrayal of society, of the social order, which justifies the deprivation of individual rights. Charges of conspiracy casts a spell over the liberal justice system—of which individual guilt is supposedly a cornerstone—smudging the even distinctions between individual subjects’ wills and actions.

In the case of the Bronx 120, the incantation was successful. In a press release after the the raid, Manhattan US Attorney Preet Bharara identified those arrested as members of two rival gangs: 2Fly, a subset of “Young Gunnaz,” and “Big Money Bosses” (or BMB), a subset of the citywide Young Bosses. Bharara implicated the gangs in the stabbing death of a 15-year-old, and the murder of a 92-year-old by a stray bullet. He spoke of Eastchester Garden residents “terrorized for years by the gangs’ open-air drug dealing and senseless violence.” Homeland Security Investigations Special Agent-in-Charge Angel M. Melendez said “ruthless” gangs use “violence and fear to intimidate” their neighbors. “These gangs are the epitome of organized crime today,” he said.

The spell cast by police, prosecutors, and a compliant media (The New York Times headline read, “Sweep in Bronx Tackles Decade of Gang Chaos”; The New York Post labeled all 120 “violent thugs”) sealed the defendants’ fate. All but 10 of the Bronx 120 were intimidated into taking plea deals; most are now incarcerated. No need for a trial, for a jury, for individual evidence beyond a reasonable doubt.

THE J20 CASE has played out differently. Only one defendant has served jail time (three months). A few dozen have pled to misdemeanors, and the vast majority have seen their charges dismissed. Only 36 still face trial, which are set to be conducted in groups of four to eight over the next few months. Thanks in large part to their comparative privilege, and perhaps the lesser severity of their alleged crimes, most defendants were able to resist pleas and force jury trials. And jurors, it seems, are not as susceptible to the spell of conspiracy as the state had hoped (at least when the supposed conspirators are white). As one juror told reporters after the first trial, “The prosecution admitted the morning of day one that they would present no evidence that any of the defendants committed any acts of violence or vandalism. From that point, before the defense ever uttered a sound, it was clear to me that ultimately we would find everyone not guilty.”

The legitimacy of the government’s J20 case has also suffered from the emergence of a state conspiracy: By all appearances, the US Attorney’s Office, the Metropolitan Police Department in Washington, and right-wing groups conspired to infiltrate anti-authoritarian protest groups in the lead-up to Trump’s inauguration, surreptitiously record their meetings, edit the recordings to maximize suspicion, and use those nefariously-recorded and selectively-edited videos to put activists in jail. It also appears to have been the US Attorney’s Office’s intention to conceal the nature and extent of the conspiracy, perhaps because of the unsavory profile of its co-conspirators, Project Veritas, a collection of far-right media provocateurs famous for ethically questionable “sting” operations, including recent failed attempts on The Washington Post and The New York Times.

I reported for The Intercept in May that prosecutors had unconstitutionally withheld potentially exculpatory evidence from the defense by clipping one of the videos they received from Project Veritas. In the excluded passage, an undercover cop can be heard saying, “I don’t think they know anything about any of the upper echelon stuff”—referring to protest organizers. Later, it was revealed that the government had failed to disclose 69 other recordings of protest planning meetings captured by Project Veritas infiltrators that were shared with the police. As sanction for these violations, Chief Justice Robert E. Morin prohibited the government from proceeding on conspiracy charges for the next two trial groups. It remains to be seen whether conspiracy counts against the remaining 36 defendants will also be thrown out.

The US Attorney’s Office will likely get away unpunished for suppressing evidence in pursuit of incarcerating innocent activists. The fact that the public found out about it at all is anomalous—we’ll likely never know the extent of the state’s conspiracy against the Bronx 120. “Brady violations,” in which prosecutors fail to disclose exculpatory evidence to the defense, are rampant but rarely punished in our legal system, especially in New York, where a “Blindfold Law” allows prosecutors to withhold relevant information until the day a trial begins. Just last week, reporters George Joseph and Simon Davis-Cohen revealed that prosecutors in the Bronx District Attorney’s office subjected a 27-year-old Bronx woman to a years-long prosecution on attempted murder charges before disclosing a swath of exculpatory evidence—including video surveillance corroborating her account that she herself was the victim.

The Bronx 120 and J20 cases are perhaps less anomalous than they appear. In a sense, our entire legal system is a conspiracy against the rights of the public—especially the black and brown and poor. Ninety-four percent of state-level criminal convictions are the result of guilty pleas, not trials; at the federal level, that number is 97 percent. Collective punishment, which criminalizes whole communities, is a feature of the system, not a bug. Police conspire with prosecutors who conspire with judges to mete out punishments to those the state wants to punish, a negotiation only tangentially related to facts or justice.

Sam Adler-Bell is a freelance writer in Brooklyn, New York. He co-hosts the Dissent podcast Know Your Enemy.

Investigation
Welcome to Lammville
How the Hasidic housing crisis led to the largest case of federal voter fraud in modern American history
Britta Lokting and Sam Adler-Bell
Feature
The Capitalist’s Kibbutz
WeWork sold Wall Street a fantasy of Israeli communal living with an entrepreneurial twist—until it collapsed.
Sam Adler-Bell
Sign up for our email newsletter, featuring exclusive original content
Want original reporting and analysis on Israel/Palestine?
Sign up for the Tuesday News Bulletin.