Dispatch From a Mixed City

Violence in Israel’s Jewish–Arab cities is an attack on the already fragile fabric of joint life. 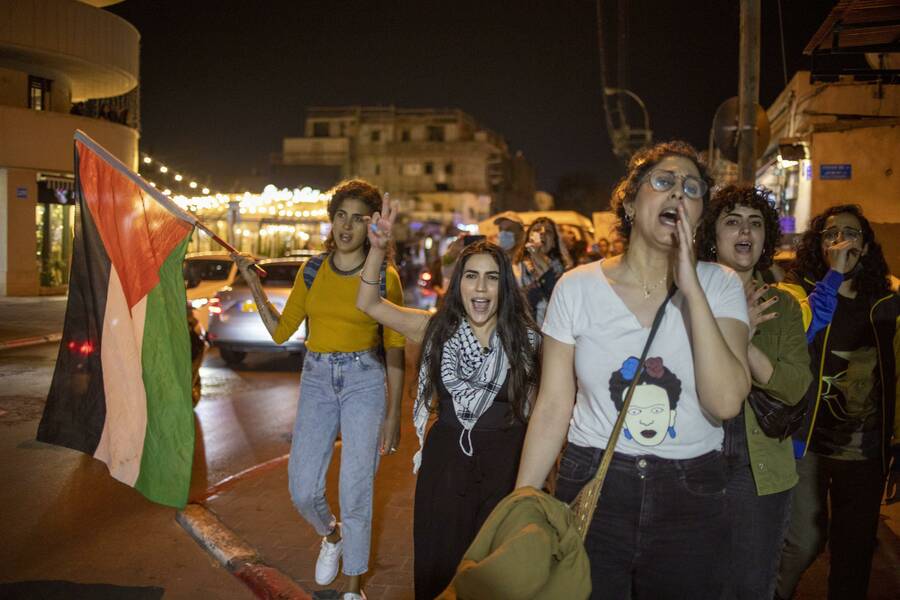 This dispatch originally appeared in yesterday’s email newsletter, to which you can subscribe here.

THESE LAST FEW DAYS IN JAFFA, the most centrally located and deeply unequal of Israel’s mixed Jewish–Arab cities, a tense quiet has prevailed. The intercommunal mayhem that engulfed mixed cities like Acre and Lod since Israel’s horrific attack on the Gaza Strip began last week has for the most part passed us by. To even speak of what might have happened, and still might, seems like courting misfortune. But if the worst is to be averted, it must be imagined and faced head-on.

The conflagration within Israel’s 1948 borders, while unexpected, did not erupt spontaneously. The Jewish residents of the mixed cities have for years been targeted for proselytization by groups of extremist West Bank settlers whose guru, Meir Kahane, is also the hero of street-brawling groups like Lehava and La Familia. The involvement of Palestinian residents in the indefensible destruction of Jewish lives, livelihoods, and places of worship as part of this violence should not be ignored or glorified. But the arrival of armed settlers in the mixed cities, Netanyahu’s framing of the troubles as Arab “terrorism,” the criminal justice system’s completely lopsided response, and the police’s naked provocations all point in the direction of a strategic agenda being served: ethnic cleansing, known euphemistically in Israel as “population transfer.” Netanyahu’s recent courting of Kahanism, through his promotion of the far-right Religious Zionism party, explicitly legitimates this agenda.

In a way, this is nothing new. The threat of “transfer” has hung over the heads of the Palestinians who managed to retain their homes in the state of Israel ever since the original ethnic cleansing of 1948. Just a few years ago it was touted by politician Avigdor Liberman—now a darling of anti-Netanyahu centrists—as a way of dealing with the Arab-majority area of Wadi Ara, which abuts the West Bank. But one should not expect the next round of ethnic cleansing to arrive in the familiar guise of camouflaged trucks and shouting soldiers. In the mixed cities, it may take the shape of further provocations by state and parastate actors, calculated to gradually destroy the texture of everyday Palestinian life, which relies on peaceable, if not always harmonious, interaction between Arabs and Jews.

The word “coexistence” is often applied to life in the mixed cities, but local activists are hesitant to use this simplistic term, which is all too often abused by romanticizing tourist agencies and see-no-evil dialogue groups. This tissue of common life is a scar over the broken flesh of previously lively urban centers, a direct result of the corralling of those Palestinians who managed to survive the Nakba into cramped ghettos. The foundational violence of 1948 has continued to mar the social life of these cities, many of which were packed after the war with Jewish immigrants nearly as poor as the locals. As in many other places around the world, here the effects of capitalism and racism are compounded through gentrification, and its slow violence has made survival even more difficult for residents of the sought-after beachfront neighborhoods of Jaffa. Braving poverty and discrimination, the Palestinian residents of the mixed cities have refused to budge, practicing sumud, the Palestinian national value of steadfastness. But here, where Arabs and Jews live in close proximity, patronize each other’s businesses, and even undertake cultural projects together, connections with Jews have been central pillars of the Palestinian strategy for survival.

The long-standing links between the mixed cities’ Palestinian communities and the Israeli Jewish left have given rise to political initiatives that play a role in protecting these communities from the combined violence of state and market. Most prominent in recent years has been the Tel Aviv/Jaffa municipal political party City for All, led by Jewish Knesset member Dov Khenin of the majority-Palestinian party Hadash (now part of the Arab-led Joint List). During its heyday as an effective opposition to the city’s neoliberal mayor Ron Huldai, City for All managed to secure an informal moratorium on the eviction of Arab Jaffans from housing that had been confiscated from Palestinian refugees and held by the public corporation Amidar. Along with a few other pockets—the higher education system, the hospitals—the mixed cities have become small islands of common living in what has become, since the beginning of the Oslo process, a sea of total segregation.

The mixed cities thus make a doubly attractive target for the far right in government and its parastate allies: Not only do their trapped Palestinian populations make for relatively easy targets, but their very existence represents the possibility of Jews and Arabs living together, a possibility these groups would like to eradicate. To an extent, they have already succeeded. As a Jew who has lived in Jaffa for over a decade, I had never felt the slightest concern about interactions in public spaces before this week. If I am now more cautious, how much more frightened must my Palestinian neighbors be, knowing that if conflict breaks out the police will not come to their aid as they would come to mine?

God willing, soon the attack on Gaza will end. But if Netanyahu’s jingoistic strategy succeeds in keeping him in power—as it probably will—then we can expect the onslaught on the mixed cities to continue, with the aim of pushing local Palestinian communities away from prime real estate and deeper into isolated ghettos, and destroying the texture of joint life. The emergency committee for self-defense established by the Palestinian community in Jaffa understands this, and has reached out to Jewish allies, who have responded warmly. The threat to sumud here is as dire as it has been in decades, but this community will not be destroyed without a fight.

A previous version of this piece overstated the specific link between garinim toraniim, or "Torah nuclei," and Meir Kahane.

Matan Kaminer is an anthropologist, a postdoctoral fellow at the Hebrew University of Jerusalem, and an activist at Academia for Equality.