Civic Religion and the Secular Jew 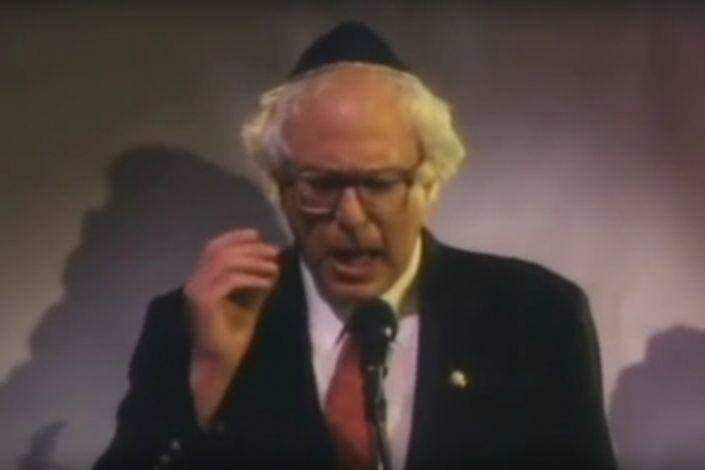 IT’S HARD TO IMAGINE Bernie Sanders’s inauguration. Not because it’s difficult to believe that Sanders could win the presidency—that seems more plausible than ever. But in the sense that it’s hard to envision what the ceremony would look like.

This is because Sanders would be not only the United States’ first Jewish president, but also—and perhaps just as significantly—the first avowed secularist to hold the office in the modern era, and inauguration ceremonies have long been explicitly religious affairs. They have typically featured multiple prayers, generally led by a range of Christian leaders—a reflection of the nondenominational Christian bedrock on which American civil religion rests. Rabbis have also occasionally led inauguration prayers, though far less frequently. Rabbi Marvin Hier, dean of the Simon Wiesenthal Center, who gave a benediction at Donald Trump’s inauguration in 2017, was the first rabbi to lead a prayer at an inauguration since Rabbi Alfred Gottschalk, then-president of the Reform Movement’s Hebrew Union College, blessed Ronald Reagan’s second inauguration in 1985.

Who would speak alongside President-elect Sanders on the steps of the Capitol Building? Who would deliver the invocations and the benedictions? Would there be more rabbis, or more pastors and priests? Would Sanders be sworn in on a Bible, a Tanakh, something else? Might Sanders, a staunch defender of the separation of church and state, object to the presence of prayer altogether?

The difficulty of answering these questions illustrates just how significant a change from the status quo the election of a secular Jewish president would be. It remains conventional wisdom among pundits and pollsters that America is a deeply religious country, and that any presidential candidate must speak—and speak authentically—about their faith in order to win. The election of Trump—who transparently has no spiritual life to speak of and who has proven utterly incapable of speaking convincingly about matters of faith—should have finally proven this idea false. Yet the expectation has persisted.

With a different kind of Jewish candidate—such as an openly observant or Orthodox Jew like former Connecticut Senator Joseph Lieberman—there would likely be fewer questions. American Modern Orthodoxy has largely conformed to the normative contours of faith in American life. But there is, paradoxically, something almost unassimilable about Sanders’s secular Jewishness.

That unassimilable quality has been reflected in recent discussions of Sanders’s religious identity. Last week, Brittney Cooper, a professor at Rutgers University and a prominent supporter of Elizabeth Warren, tweeted that Sanders is an atheist, and that this might limit his ability to connect with black voters. In response, many pointed out that Sanders has said he believes in God, and Cooper quickly apologized for “spreading misinformation” about his religious identity. But her mistake—conflating Sanders’s secularism with atheism or a lack of religious affiliation—is a common one. That same week, The Washington Post published an article that described Sanders as the “most prominent American politician who is religiously unaffiliated.”

While Sanders readily admits that he is “not actively involved in organized religion,” it isn’t quite accurate to describe him as “religiously unaffiliated.” That’s because, like many of the conventional frameworks for understanding faith and religious identity in the US, this kind of binary—religiously affiliated vs. unaffiliated—is not adequate for understanding American Jewish life. Most Jews, like Sanders, are not involved in institutional religious life; yet for many such “unaffiliated” Jews, Jewishness remains an integral part of their identities. The binary of theism vs. atheism is likewise unhelpful in understanding Jewish identity. Judaism, unlike Christianity, is not a strictly creedal religion—that is, a religion that requires belief in a fundamental dogma—and many Jews report feeling strongly connected to Jewish peoplehood, culture, and history without necessarily believing in God. Moreover, while discussions of Christianity often center around personal faith, it’s not uncommon, even in relatively observant American Jewish communities, for questions of ethics, ritual, and practice to take much greater priority than questions of faith or belief in God.

Viewed in this light, and contrary to the coverage in much of the Jewish press, Sanders’s Jewish identity is firmly within the American Jewish mainstream. Sanders does not belong to a synagogue—and he has this in common with two-thirds of American Jewish adults, according to Pew’s 2013 “Portrait of Jewish Americans.” He is part of an interfaith family, as are 44% of married Jewish adults. (Sanders married Jane O’Meara, a practicing Catholic, in 1988, when the rate of intermarriage was around 41%, but the share of Jews marrying non-Jews has since increased: roughly 60% of Jews who married after 2005 married a non-Jew.) On Israel, the self-described “100% pro-Israel” Sanders is a conventional liberal Zionist: strongly critical of Benjamin Netanyahu, still committed to a two-state solution, and willing to use US government pressure to hold Israel accountable for its actions. Most American Jews hold similar views: the majority feel positively about Israel, disagree with its government’s policies, support a two-state solution, and believe the US should exert pressure on Israel to achieve peace.

When asked about his religious beliefs in a January interview with the New York Times editorial board, Sanders said, “I believe in God. I believe in the universality of people. That what happens to you impacts me.” Such a view of God is also in line with most American Jews’ theological inclinations: roughly 70% say they believe in a God or “universal spirit,” although only a third are “absolutely certain” about this belief, and more than two-thirds say it’s not necessary to believe in God to be Jewish. Instead, when asked by Pew “what’s essential to being Jewish,” 73% said “remembering the Holocaust,” 69% said “leading an ethical and moral life,” and 56% said “working for justice/equality.”

All of these values were on display in Sanders’s most recent public statement on his Jewish identity. During a CNN town hall in New Hampshire last week, a woman in the audience asked Sanders how “[his] Jewish heritage impacts [his] vision of the world and politics” and whether he finds it to be a “help or hindrance in [his] role as a candidate.” “It impacts me very profoundly,” he answered. He described growing up in a working-class community in postwar Brooklyn around people who had concentration camp numbers tattooed on their arms. “At a very early age, even before my political thoughts were developed,” he said, “I was aware of the horrible things that human beings can do to other people in the name of racism, or white nationalism, or in this case, Nazism.”

Sanders’s response exemplifies a Jewishness that draws a commitment to an egalitarian and universalistic vision of a better world from particular Jewish experiences of suffering and oppression. It’s a form of Jewishness distinct from the inward-facing, nationalistic, even chauvinist vision that has become dominant in the American Jewish institutional world, expressed by groups like the Anti-Defamation League, the American Jewish Committee, and AIPAC. That so many Jewish institutional leaders, as well as Jewish journalists, have chafed at, second-guessed, or rejected Sanders’s kind of Jewishness says much more about their own disconnection from the great majority of American Jews than it does about Sanders.

But however familiar Sanders’s Jewishness might seem to large numbers of American Jews, his particular religious vocabulary—of trauma, solidarity, this-worldly justice—also fits uneasily into the hegemonic, Christianity-inflected form of American religious discourse writ large, which emphasizes notions like personal salvation, faith, and grace. The question remains whether journalists—as well as voters—will be willing to try to understand Sanders’s secular Jewish identity on its own terms.

AS SANDERS HAS EMERGED as the Democratic front-runner, he has begun to speak more about his Jewish identity than he did during his 2016 campaign, in public appearances as well as in an essay for this publication. In his words, the resonances of repressed and forgotten ideas about Judaism have surfaced. Sanders embodies a certain form of working-class secular Jewishness, but what he has started to articulate goes beyond that. Whether intentionally or not, he is tapping into some of the themes of the prophetic Judaism once exemplified by leaders of the Reform Movement, like the late Albert Vorspan, a founder of the Religious Action Center (and Jewish Currents contributor), who argued strongly for the importance of Jewish participation in the struggle for black civil rights and who was among the first Jewish leaders to speak out against the Vietnam War.

Those who sought to practice and promote a prophetic Judaism saw the Hebrew Bible, and in particular the Hebrew prophets, as a source of a universal vision for world peace and equality. They spoke about the universal ethical function of Jewish particularism and warned against the new forms of Jewish identity—such as messianic right-wing Zionism and neoconservatism—that were gaining strength in the postwar era, and that argued for Jews turning their backs on fighting for a more just world for all people.

Sanders’s recent remarks have begun to touch on these themes, and not only at the New Hampshire town hall. “If there is any people on earth who should do everything human possible to fight against Trump’s effort to divide us by the color of our skin, or our language, or our religion, or where were were born,” Sanders told an audience at J Street’s conference last fall. “If there’s any people on earth who should be trying to bring people around a common and progressive agenda, it is the Jewish people.” There is, of course, the risk of a certain exceptionalism in the articulation of prophetic Judaism. But the belief that the Jewish people can and should be “a light unto the nations” does not mean that other nations and traditions cannot be lights of equal brightness, working together to banish the darkness that threatens us all.

This kind of message could be a way of using particular Jewish experience to speak across religious differences—to articulate a religious morality not primarily concerned with first principles of faith. It would also enable Sanders to stay true to his secularism while demonstrating that he understands the value of religious traditions, texts, and the ethical commitments they prescribe.

Sanders’s secular Jewishness is among the most common forms of Jewish identity in the US, yet it is a religious identity that has never before appeared so prominently on the national political stage. The question of its intelligibility to non-Jews is also the question of the intelligibility of American Jewish life.