Brexit Is Bad for the Jews

A Labour win is Britain’s best chance of staying in the European Union—a guard against far-right nationalism. 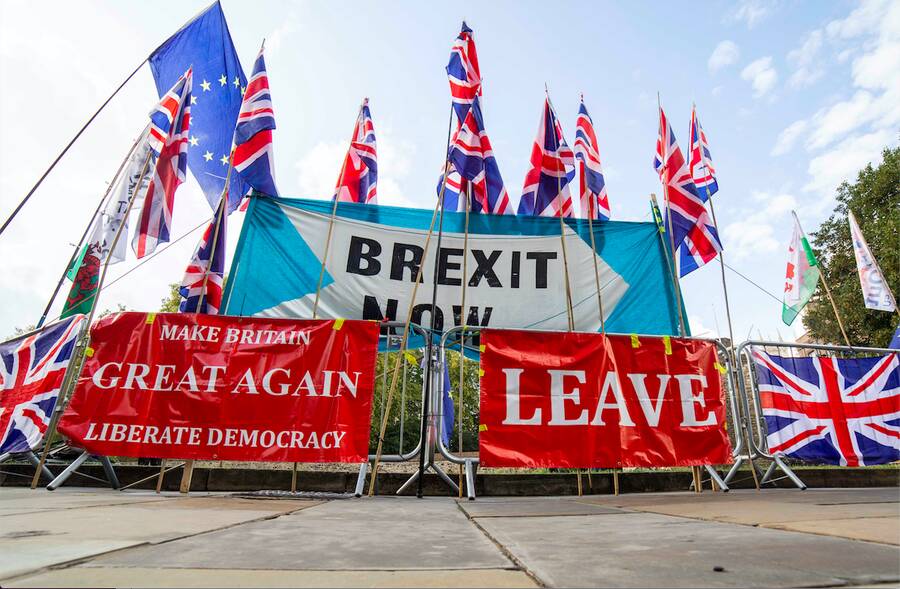 Flags and messages in support of Brexit outside the Houses of Parliament in London, October 2019. Photo: ComposedPix via Shutterstock
Tweet Copy Link Email Print

IF BRITISH JEWS want to vote for Jewish interests next week, they should vote Labour.

That might sound counterintuitive, since British Jewish institutions have declared war on the Labour Party and its leader, Jeremy Corbyn. British Chief Rabbi Ephraim Mirvis publicly wrote against Labour in the Times last week, and the London-based Jewish Chronicle ran a front-page editorial addressed to non-Jews attacking Corbyn. In September 2018, a Chronicle poll found that 86% of British Jews believe that Corbyn is an antisemite, and his every action is scrutinized for evidence of prejudice against Jews. Even his recent mispronunciation of the “s” in Jeffrey Epstein’s last name has been twisted into a strange shibboleth, phonetic evidence of his Judeophobia.

There are serious concerns about antisemitism in Labour. Corbyn was surely wrong to defend a muralist who depicted a table of Jewish-looking men playing monopoly on the masses’ bodies in 2012, and it took him too long to admit it and apologize. And some of his associates have said antisemitic things, as when Labour MP Naz Shah suggested moving Israel to the United States (she subsequently apologized).

But these legitimate issues aside, much of the expressed concern is premised on the dangerous insistence that to criticize Israel is inherently antisemitic. In particular, pro-Israel Jews have forced Labour to adopt the International Holocaust Remembrance Alliance’s (IHRA) definition and examples of antisemitism, which include “denying the Jewish people their right to self-determination” by calling a Jewish state “racist.” Corbyn’s critics have also publicly attacked him simply for being pro-Palestinian. A popular list of “51 times Jeremy Corbyn was no friend of Jews” slams the Labour leader for declaiming the influence of “pro-Israel lobbying groups” on the British government and comparing Israel to “self-styled Islamic states”—both of which are perfectly defensible arguments.

As The Nation has reported, within Labour, antisemitism accusations are being used by centrist MPs who support Tony Blair-style neoliberal austerity against Corbyn’s democratic socialism. A coordinated, cynical campaign by pro-Israel advocates and Corbyn’s neoliberal political enemies has convinced the public that antisemitism is uniquely Labour’s problem. The British public now absurdly believes that a third of Labour members face antisemitism complaints—more than 300 times the actual number. There is real antisemitism in Labour, as there is throughout British society, but the supposed antisemitism crisis in Labour has been manufactured for political purposes.

Still, there is little reason to believe that a Labour government will lead to persecution of or violence against British Jews. While antisemitic attacks are up in the UK, they are not coming from the socialist left. Antisemitic attitudes are prevalent among young white men “with affiliations to extreme right-wing groups,” a demographic responsible, the World Jewish Congress found, for 90% of antisemitic posts on UK social media. It is understandable that British Jews are frightened, given antisemitic violence elsewhere in Europe and the long tradition of polite, genteel Jew hatred in England. But if the Jewish editorials attacking Labour are as vague as they are alarmist, it’s because no one can articulate what Corbyn and Labour would actually do to British Jews.

By contrast, one of the election’s central issues—whether, and on what terms, the UK will leave the European Union—has profound and direct material implications for the future safety of European Jews. Labour, to be sure, is officially remaining neutral on Brexit and only promising a new public referendum, one in which the option to “remain” in the EU seems a narrow favorite. But the Labour shadow cabinet—that is, the senior members of the opposition party corresponding to the Conservative ministers—favors remaining. Meanwhile, Prime Minister Boris Johnson, the leader of the Conservative party and an outspoken bigot with a long list of antisemitic associates, is absolutely committed to leaving. Then there are the Liberal Democrats, who currently exist almost entirely to oppose Brexit, and who will likely gain seats in this election, but who have no realistic shot to form a government. The only chance for the UK to stay in the EU is a Labour victory.

The accusations of antisemitism in Labour largely concern the Israeli–Palestinian conflict—an issue with little concrete significance for British Jews’ daily lives. By contrast, Brexit is a central, existential concern for European Jews. Most immediately, the EU provides freedom of movement that massively benefits Jews. In a recent poll, nearly half of British Jews said they would “seriously consider” emigrating if Corbyn won. While this is likely hyperbolic—akin to American liberals claiming they’ll flee to Canada if Donald Trump wins—the point is that only if Labour wins will they have anywhere besides Israel to flee to.

Moreover, the EU consistently censures and overrules far-right European governments. In Hungary, for instance, Prime Minister Viktor Orbán embraces antisemitic propaganda; has praised Miklós Horthy, the Hungarian leader who allied with the Nazis; and has added antisemitic writers to the national core curriculum for public schools. The EU acts as one of the few checks on Orbán: the European Parliament recently initiated so-called “Article 7 investigations” into whether Orbán has undermined democracy and the rule of law in Hungary, opening the possibility of suspending Hungary’s voting rights. (By contrast, Israel under Prime Minister Benjamin Netanyahu has been one of Orbán’s key allies.) Similarly, Poland’s far-right, antisemitic government is currently being investigated by the EU for interfering with judicial independence. To remain in the EU guarantees British Jews the possibility of appeal beyond the narrow borders of the nation-state: if the nationalist right grows stronger and antisemitism does get worse, British Jews will regret having lost that possibility. More broadly, leaving the EU weakens it economically and encourages separatist, nationalist movements elsewhere, endangering Jews and other minorities throughout Europe.

At least in part for this reason, attacks on the EU across the continent are mostly led by far-right nationalists who are none too fond of Jews. The people burning effigies of George Soros dressed as an Orthodox Jew in Poland are doing so in protest of the EU. Similarly, in Britain, Brexit advocate Nigel Farage has repeatedly attacked Soros and praised Orbán. For far-right nationalists, the question of international governance is synonymous with the Jewish question. This has real consequences for British Jews: a 30% rise in antisemitic hate crimes in Britain immediately followed the Brexit referendum. Jews who give up on the EU and vote against Labour are strengthening the hands of the separatist, ultra-nationalist right.

The EU has many flaws—it is deeply undemocratic, frequently prioritizes capital over workers, and has erected a massive security apparatus to police migrants. But on the narrow question of Jewish interests, the cosmopolitan project of European integration has been unquestionably good. Things were once far worse: from Khmelnytsky’s Cossacks to Hitler’s death camps, the history of European nationalism is the modern history of antisemitism. The Jews can never truly belong in Farage’s Britain, any more than they do in Orbán’s Hungary or Mateusz Morawiecki’s Poland.

British Jews recognize the importance of the EU to Jews. They voted overwhelmingly for “remain” in the first Brexit referendum. Perhaps more tellingly, thousands have reacted to fears of an imminent Brexit by applying for German citizenship offered to the descendants of German Jews. Those British Jews are implicitly demonstrating what European citizenship means to Jews, and exactly what would be lost were the UK to leave.

This argument, to be sure, is not popular with British Jews, most of whom apparently prefer a no-deal Brexit to a Corbyn government. While this is of course their choice, it’s also the result of imagining Jewish interests in Zionist, Israel-centered terms.

The Jewish left can appeal to other issues in making the case for Labour. To vote against a Labour government is to vote not only for Brexit, but for the ongoing chipping away at Britain’s National Health Service in favor of private, corporate interests; for continued austerity and limits on social services for the poor and homeless; for Islamophobic, anti-immigrant rhetoric; and for further tax breaks for the very rich.

But above all, the EU—with its commitments to open borders, transnational institutions, and minority protections—has done an enormous amount to make Jews safer in post-World War II Europe. Deals made with reactionaries endanger Jews, and British Jews have less to fear from Corbyn’s mispronunciations than from Brexit and right-wing nationalism.

Raphael Magarik is an assistant professor of English at the University of Illinois at Chicago.

Review
The Prophet with Eyes
In Olga Tokarczuk’s The Books of Jacob, based on the real life of a self-proclaimed Jewish messiah in 18th-century Poland, theological energy competes with the liberal novel’s finely wrought machinery.
Raphael Magarik
Conversation
Meir Kahane’s Long Shadow
The far-right activist and politician died in disgrace, but Shaul Magid’s new book argues that his ideas have shaped mainstream American Judaism.
Raphael Magarik
Sign up for our email newsletter, featuring exclusive original content
Want original reporting and analysis on Israel/Palestine?
Sign up for the Tuesday News Bulletin.