Feminist City helps us dream up alternative futures, even if it doesn’t do the dreaming itself. 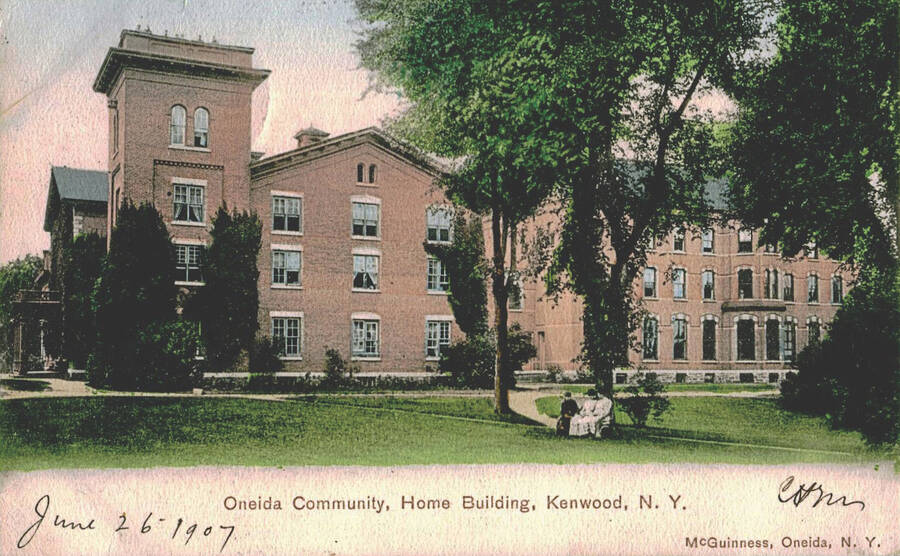 IN THE MIDDLE OF NEW YORK STATE, the Oneida Community Mansion House stands as a testament to the intersection of architecture and radical social ideals. In 1848, the same year Karl Marx and Friedrich Engels published The Communist Manifesto, a group of utopian socialists seeking spiritual perfection built a communal dwelling in the town of Oneida. Thirteen years later, having outgrown their home, they built the Mansion House, which still stands today. Three hundred men and women lived together in the house at its peak, committed to full sexual equality and practicing what they called “complex marriage,” a form of polyamory in which every man was married to every woman. Intimate relations occurred freely between all members of the family, untethered from notions of possession and private property, and children born into the community were raised collectively. The Oneida Community designed its house to reflect these communal values. They built a two-story Family Hall that could hold the entire population of the mansion for daily group events, and a children’s wing where teachers looked after the collective’s youngest members. Abundant community rooms and a library encouraged as much social interaction among family members as possible.

The Oneida Mansion was inspired by other utopian socialist living experiments, and many more followed. In the early 19th century, the manufacturer and social reformer Robert Owen built “villages of cooperation” in Scotland and Indiana, based on the premise that healthy living in planned communities could alleviate poverty. In France around the same time, the philosopher Charles Fourier dreamed up the phalanstery, a communally-owned building designed to house a self-sustaining collective of several hundred individuals. These endeavors influenced 20th-century cooperatives including Israel’s kibbutzim, the Soviet Union’s kommunalki (expropriated urban dwellings subdivided to house multiple families), and the co-housing movement in Denmark (where private homes cluster around shared common spaces). Later, architects and engineers designed microdistricts known as mikrorayon in the USSR and xiaoqu in China: massive housing complexes within walking distance to parks, health clinics, schools, and groceries, and connected by free or subsidized public transportation to universities, hospitals, factories, and offices. Today, the communal infrastructure that architectural historian Kimberly Zarecor calls “the socialist scaffold” continues to shape urban landscapes across the former socialist world, providing a fascinating alternative to the cities of the capitalist West.

Leslie Kern’s short and elegant book Feminist City: Claiming Space in a Man-Made World explores the antithesis of socialist urban planning, crystallized in what she calls “the heteropatriarchal city”: urban space designed to privilege the needs of atomized individuals (usually white, cisgender, heterosexual, and able-bodied men), rather than the needs of communities as a whole. Combining history, theory, and personal reflections on Kern’s own experiences in Western urban spaces, the book is an excellent introduction to feminist geography, a field that explores how gender intersects with physical space to structure pervasive systems of oppression. The cities that concern her here—largely North American metropolises like Toronto and New York, although London also features prominently—are constructed upon a capitalist scaffold, to adapt Zarecor’s terminology, where decisions about land use and development are underpinned by the profit motive, and zoning laws and public policies are designed to protect the property values of the wealthy. The book is an exemplary critique of the failings of these cities. Lacking necessities like on-site childcare and accessible mass transit—investments that require large taxpayer subsidies abhorrent to urban elites—such cities create particular hardships for women, whose daily lives often involve care work and other forms of reproductive labor: raising children, helping elderly relatives, managing households. The book is an exemplary critique of the failings of these cities—though it would have been enhanced by a deeper and more critical understanding of the capitalist imperatives that produce them.

Kern argues that North American city planning models have been shaped by ideologies of white supremacy and—her focus here—traditional gender roles. By imagining the “typical” city dweller as a man, these models fail to accommodate the needs of women juggling paid work along with childcare and other forms of unpaid labor. Indeed, the US suburbs that fundamentally reshaped urban architecture after World War II, bolstered by government subsidies that encouraged white flight, intentionally kept white “Rosie the Riveters”—women who had worked in factories and shipyards during the war—cordoned off at home. “Post-war propaganda was explicit about the need for women to relinquish their wartime factory jobs to returning men, and the suburban home was the perfect ‘fix’ for re-establishing normative gender roles,” Kern writes. “By providing a spatial solution to the temporary widening of women’s horizons, the public-private, paid-unpaid work divide could be ‘naturally’ re-established between the sexes.” Single-family home ownership undermined the forms of solidarity possible when people inhabit more communal living environments, including the sharing of care work. It accelerated the process of capitalist atomization, with its punishing effects on women, by means of the white picket fence.

Over the past several decades, developers and local governments have refocused investment in higher-density urban living. The spruced-up cities they have built, however, are still designed to prioritize the needs of able-bodied workers producing wealth in the formal economy, while continuing to inflict violence and discomfort on those with caring responsibilities—which overwhelmingly still fall to women. Despite the expanded possibilities for women’s lives won by feminist activism, longtime feminist dreams of housing options with communal kitchens, laundries, and play spaces for children are nowhere in sight. Instead, male architects continue to build homes that isolate and overburden individual women with unpaid work that could be more productively shared.

Using lively anecdotes from her own experiences to complement her sociological analysis, Kern reflects on the way urban planning remains ill-suited to women, describing the hostility directed toward her unwieldy pregnant body on the crowded London Tube, her struggle to navigate public transportation with a stroller in Toronto, and her discomfort at the role that motherhood plays in fueling gentrification. She also suggests some possible avenues for improvement. She reports, for example, on research finding that, as a rule, cities plow the snow from major arterial roads into corporate-dominated downtowns before they clear the side streets that women and children use to get to school or move around within their neighborhoods. As a corrective, the city of Stockholm has instituted a “gender equal plowing strategy” that concentrates first on sidewalks, bike paths, bus lanes, and other areas heavily trafficked by women and children in the early morning.

But those seeking large-scale solutions to the many problems of heteropatriarchal urban planning will find few in Feminist City. Unfortunately, Kern seems to take capitalism as a reality impervious to change. “Ultimately, I don’t think we can rely on urban policy and planning to sustain or generate the kinds of spaces that allow non-traditional relationships to flourish,” she writes in a chapter on cities and friendships. “Planning paradigms and property regimes that favor particular kinds of ownership are slow to change. Furthermore, in most cities, the private real estate market determines what kinds of spaces are built, which businesses survive, and even which services will be provided.” So why not abolish the private real estate market? Why not challenge the property regimes that “favor particular kinds of ownership”? Sadly, the book overlooks the history of alternative models of city-making from a socialist perspective, and in its conclusion seems to actively dismiss them. While Kern admits that “affordable housing, living wages, free child care, and affordable health care and education are critical ingredients for most feminist urban visions,” she is ultimately unconvinced by “Marxist and ‘critical’ scholarship and activism,” which she believes sideline “gender, race, sexuality, and disability at the margins of the struggle.”

To be sure, critics of capitalist urban planning must embrace intersectional solutions. Yet Kern’s conclusion gives only superficial guidance to those interested in “enacting visions of the feminist city”—precisely because it fails to see how collectivizing intimate living places and larger urban spaces would encourage not only greater collective solidarity, but also more attention to the very populations excluded from the heteropatriarchal city. Surely, contemporary feminist geographers should engage with the many socialist experiments conducted in the 19th and 20th centuries intended to do just that. For example, the reconstruction of East European cities after World War II followed the Soviet model, recognizing the specific needs of women who were being mobilized en masse into the formal labor force. Unlike London or Toronto, the microdistricts of Eastern Europe—with their easy access to parks, playgrounds, and mass transit systems—were specifically designed with the needs of working mothers in mind.

For better and for worse, we live in a new era of radical experimentation that has only been further catalyzed by the coronavirus pandemic. In the desert of Saudi Arabia, architects and engineers are building Neom, a city of the future complete with an artificial moon and flying drone taxis. In San Francisco and Los Angeles, corporations like StarCity are marketing adult dorms to disenfranchised millennial tech employees unable to buy into local housing markets. Meanwhile, at the University of Pennsylvania’s design school, a new generation of city planners is reflecting on the experiences of the socialist past to think—as the artist and doctoral student in architecture Elisheva Levy puts it—“beyond monogamous architecture.” In Paris, mayor Anne Hidalgo is advocating for the “fifteen minute city,” an urban design concept, similar to the old Soviet mikrorayon, that would allow residents to shop, work, and recreate within a 15 minute walk from their homes. The many global challenges of the 21st century—chief among them climate change, xenophobia, and extreme income inequality—require bold new visions of city planning, visions that necessitate a familiarity with architectural histories outside of those in the capitalist West.

Today the Oneida Community Mansion House is a museum and a guesthouse and can also be rented out for private weddings—meaning that, ironically, couples can now enact the rites of bourgeois monogamous marriage in a place constructed to support a radical alternative to the nuclear family. But just as utopian architecture can be repurposed to serve the status quo, our capitalist, heteropatriarchal cities could one day be transformed into inclusive urban centers that “recognize women’s autonomy” as well as “our connectedness, to our friends, our communities, [and] our movements.” By providing an accessible critique of current urban landscapes, Feminist City helps us dream of these alternative futures, even if it doesn’t do the dreaming itself.

Kristen Ghodsee is a professor of Russian and East European studies at the University of Pennsylvania. She is the author of nine books, including Why Women Have Betters Sex Under Socialism: And Other Arguments for Economic Independence, and hosts a podcast on the life and works of Alexandra Kollontai.