To the relief of Palestinian-rights advocates, the department’s Office for Civil Rights did not adopt the controversial IHRA definition of antisemitism this past December. 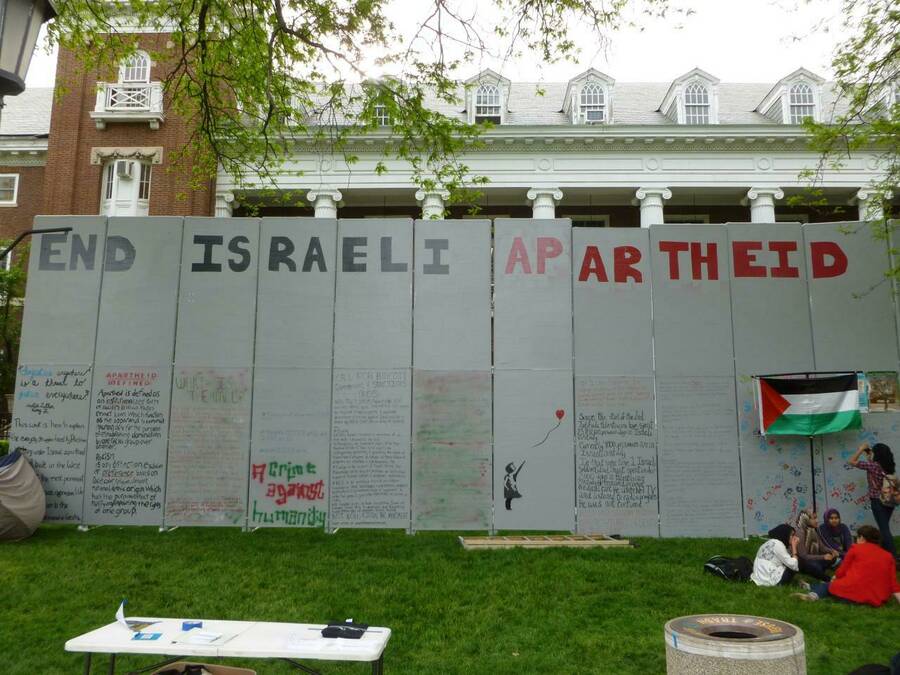 A mock Israeli separation wall erected by the group Students for Justice in Palestine at the University of Illinois Urbana-Champaign in 2012.

As December 2022 approached, Palestinian-rights advocates grew nervous. That was the month by which the Department of Education’s Office for Civil Rights (OCR) had promised to issue a new rule for assessing complaints of antisemitism, to comply with former President Donald Trump’s 2019 executive order on the subject. Advocates worried that in putting forward the rule, OCR might formally propose adopting the controversial International Holocaust Remembrance Alliance (IHRA) definition of antisemitism, which has been criticized for conflating censure of Israel with anti-Jewish bigotry.

But December came and went with no rule published. Instead, on January 4th, OCR announced that it was delaying issuing the rule until December 2023 and released a fact sheet affirming its commitment to fighting antisemitism, as well as other forms of bigotry. Jewish groups that support the use of the IHRA definition were dismayed. “We note our disappointment in the 12-month delay in the Department of Education’s promulgation of long-promised regulations to combat antisemitism,” the leadership of the Conference of Presidents of Major American Jewish Organizations said in a statement. Progressives celebrated the deferral as a small win. “It demonstrates that the IHRA definition is not being viewed as the gold standard,” said Emma Saltzberg, US strategic campaigns director for the Diaspora Alliance, a group that fights antisemitism and its weaponization, including claims that criticism of Israel or Zionism is inherently antisemitic. “It shows that the Office for Civil Rights is taking seriously the concerns that a wide range of stakeholders have raised.”

The executive order to which OCR is responding has been widely understood as an effort to encourage adoption of IHRA. The Trump administration directed federal agencies that enforce Title VI of the Civil Rights Act—which bans federally funded institutions from discriminating against minority groups—to consider how they could incorporate the definition into their work. Criticism of IHRA from Palestinian-rights and civil liberties advocates has focused on the examples of antisemitism that accompany the definition, which seem to label some forms of criticism of Israel as antisemitic, including statements like “the existence of a State of Israel is a racist endeavor.” The State Department uses the definition in its reports on antisemitism and encourages other countries to adopt it, though no other executive agency currently uses it. Israel-advocacy groups have defended the definition and its examples. “The IHRA definition is a crucial tool in properly understanding and addressing the continued rise in hate that is causing real harm to Jews, especially students on our nation’s campuses,” Roz Rothstein, CEO of the Israel-advocacy group StandWithUs, told Jewish Currents.

Although Palestinian-rights advocates breathed a sigh of relief at the news that OCR had not adopted IHRA, their clash with mainstream Jewish groups over whether the definition should be used in adjudicating civil rights claims is far from over. Trump’s executive order remains in effect, and the office could still decide to use IHRA when they issue their rule next year. “It’s encouraging for the broader fight against the adoption of IHRA that OCR saw it as too controversial to enshrine in regulations now. But that doesn’t mean they won’t make a different decision in the future,” said Saltzberg. “This is something advocates on all sides are going to keep an eye on.”

The promised rule could change the way OCR adjudicates Title VI complaints about antisemitism. Though Title VI of the Civil Rights Act does not name religion as a protected category, in 2004 acting OCR head Kenneth Marcus—who would later found an Israel-advocacy organization and serve as Trump’s appointed head of OCR—issued a “Dear Colleague” letter stating that discrimination against Jewish, Muslim, and Sikh students on the basis of “shared ethnic characteristics” would be covered by Title VI protections. The policy was later affirmed by the Obama administration. In the last two decades, Jewish groups have filed dozens of complaints alleging that universities are tolerating anti-Jewish activity on campus.

Many of these complaints cite Palestine-solidarity activism on campus as evidence that university administrations are allowing antisemitism to fester. Civil liberties advocates dispute that such activism constitutes antisemitism. By citing IHRA, Trump’s executive order took a step toward resolving this definitional dispute in favor of mainstream Jewish groups. But the language of the order only asked agencies that enforce Title VI to “consider” whether to use the IHRA definition. “Trump said to think about IHRA, and carefully consider whether its examples ‘might be’ useful,” said Liz Jackson, a senior staff attorney at Palestine Legal, a group that defends the free speech rights of pro-Palestinian advocates. “OCR is clearly grappling with the usefulness and applicability. They are free to set the problematic definition aside after considering that its examples are not only not useful, but in fact undermine OCR’s First Amendment obligations.”

In the absence of a clear rule, OCR has been inconsistent in its application of IHRA. As Trump’s head of OCR in 2018, Marcus said he would use the IHRA definition when he re-opened a Title VI investigation into whether Rutgers University had discriminated against Jewish students. Palestine Legal criticized Marcus at the time for adopting the definition “with no public notice.” The OCR has not used IHRA to adjudicate a claim since then. In September 2020, in the first settlement of a Title VI complaint concerning antisemitism since Trump issued his executive order, New York University agreed to adopt the IHRA definition, but told Inside Higher Ed that it would not be using the controversial examples. In November, in another settlement of an antisemitism complaint handled by OCR, Duke University agreed to provide a description of antisemitism in its policy against discrimination. The policy now in use at Duke employs the IHRA definition itself but does not include the examples.

Over the past year, OCR has conducted “listening sessions” with stakeholders on the antisemitism rule, focused in part on the IHRA definition. During these sessions, the office has heard from a wide array of advocacy organizations, including mainstream Jewish groups that support the adoption of IHRA and progressive and civil rights groups that oppose it, according to Lina Assi, advocacy manager for Palestine Legal. In August, Palestine Legal and 16 other organizations—including the Center for Constitutional Rights, the National Lawyers Guild, and the US Campaign for Palestinian Rights—sent a letter to OCR asking the office not to use IHRA because of its potential to harm Palestinians and their allies by categorizing their advocacy as antisemitism. “Our biggest fear is that IHRA could be wielded against Palestinian students and educators,” said Assi. The letter cites numerous instances in which the groups say that IHRA has already been used to crack down on legitimate criticism of Israel. In March 2022, for instance, student government officials at Arizona State University cited IHRA to justify refusing a student group’s budget request to host Palestinian poet and activist Mohammed El-Kurd on campus. (El-Kurd was eventually allowed to speak after Palestine Legal informed the university that “applying IHRA to deny funding based on [the] viewpoint of the speaker would violate the First Amendment.”)

For now, civil liberties and Palestinian-rights advocates are waiting to see what OCR will do about IHRA. But even if the Biden Department of Education doesn’t adopt the definition in late 2023, it remains possible that a new Republican president could use Trump’s executive order to crack down on Palestine activism. “The executive order remains on the books, and it’s only a matter of time before a new administration with a new Office for Civil Rights leadership comes in,” said Saltzberg. “The prospect of IHRA being codified into Title VI remains alive.”

Newsletter
The Harvard Kennedy School’s Anti-Palestinian Bias
The elite institution reversed course on refusing a fellowship to a prominent Israel critic, but for students, its suppression of Palestine speech is ongoing.
Joseph Leone
Newsletter
The State of Antisemitism Reporting
How America’s major newspapers have stumbled in covering a serious phenomenon
Mari Cohen

Newsletter
The International Court of Last Resort
Human rights groups are pressuring the International Criminal Court to prosecute war crimes in Israel/Palestine.
Alex Kane
Report
Palestine Is a Proxy Fight in a Fractious DSA
With a sizable gap between the left’s demand for Palestinian liberation and the pro-Israel tack of national politics, Palestine takes center stage in arguments about discipline and electoralism.
Alex Kane
Sign up for our email newsletter, featuring exclusive original content
Want original reporting and analysis on Israel/Palestine?
Sign up for the Tuesday News Bulletin.