Atrocity in the Off Hours

What can we learn from photographs of cross-dressing Nazi soldiers? 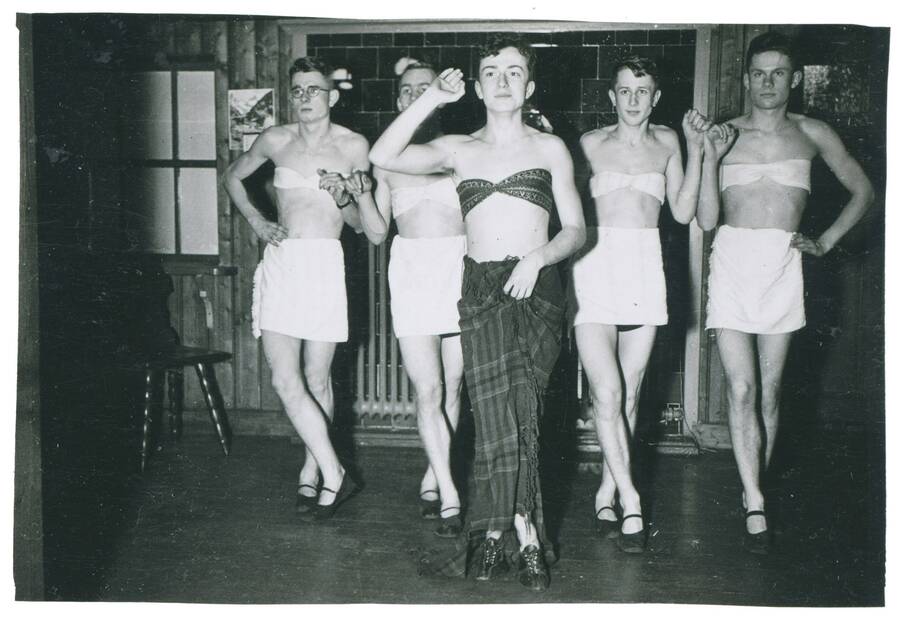 Discussed in this essay: Soldier Studies: Cross-Dressing in the Wehrmacht, by Martin Dammann. Hatje Cantz, 2019. 128 pages.

WHAT’S IN AN AMATEUR PHOTOGRAPH? According to Martin Dammann, an artist who has collected soldiers’ photograph albums since the 1990s, their pull lies in their messiness, their resistance to “clear images and unambiguous messages.” They are interesting, he writes in Soldier Studies, published this February by Hatje Cantz, because they come about “as a result of the mistakes that professionals do not make.” The ones he collects in Soldier Studies—amateur photographs of cross-dressing Nazi soldiers—are particularly intriguing.

At first blush, the idea of a cross-dressing Nazi strikes one as such a contradiction in terms that it almost seems like a joke, the kind of satire that Mel Brooks might dream up and set to music. But Dammann’s photos offer irrefutable proof: members of the unified armed forces of Nazi Germany cross-dressed all the time. Here they are horsing around in the privacy of the barracks in makeshift skirts and dresses. Here they are in military canteens, dance halls, hospitals, and POW camps dancing and laughing and putting on shows for military audiences. Dammann claims to have found photos documenting the phenomenon in every 20 to 30 wartime albums he came across via collectors and dealers in Europe and the United States.

This sort of behavior may seem incongruous with the violently misogynistic and homophobic ideology of the Third Reich, and the idealization of masculinity in the ideology and visual language of Nazism. Following the simultaneous crises of manhood and economics that followed Germany’s defeat in World War I, Nazism portrayed parliamentary democracy as emasculated and weak. But Nazi policy prescriptions, historian Christopher Dillon argues, were “nebulous,” making “image, symbolism, and cultural allure critical to the proposition” of National Socialism and the promise of a Männerstaat, or masculine state. In Nazi propaganda, young fighting men were a powerful motif, one that goes all the way back to the construct of the Sturmabteilung (SA) man, the foot soldier of the Nazi Party’s original paramilitary. Propaganda posters—and the first Nazi propaganda film, “S.A.-Mann Brand”—lionized the Brownshirt. This “sinewy and lantern-jawed” man, Dillon writes, was “a marching rebuke to the decadence and effeminacy of the Weimar political establishment.”

Might the photos in Soldier Studies, in that same vein, be a rebuke to the Nazi ideal? Dammann argues that, in dressing up, the Wehrmacht soldiers reveal themselves to be “tender and open” individuals, “abandoned to the moment and to their own desires” and yearning to transcend the Reich’s rigid masculinity. Searching for any meaningful relationship between the soldiers’ cross-dressing and the goals or ideology of Nazism, he contends, amounts to undue “exoticization.” In an essay in the book, sociologist Harold Welzer agrees, writing that readers should “avoid confusing dominant ideologies of the time” with “what motivates people to do what they do.”

Particularly in the book’s quietest photos—the portraits of individuals, where there’s no large audience around—one may, for a moment, seriously wonder if Dammann and Welzer might be right: perhaps the soldiers are documenting their private passions rather than  engaging in a consciously political act. Indeed, while Dammann reports that there is “a particular plethora” of cross-dressing images in German photo albums from World War II, such images appear in the annals of every kind of militarized, all-male setting, from US army barracks to fraternities.

But by the same token, it’s important to recall that—in any of these settings—cross-dressing occurs not in spite of strict gender roles, but precisely as a way of enforcing them. It seems like a mistake, then, not to imagine any meaning in the link between Wehrmacht cross-dressing and the Nazis’ hatred of gender deviance. While some of the soldiers do, on occasion, appear “abandoned to the moment,” it’s often clear that photographer and subject alike in these photographs are coordinating with intention to craft a particular message for the viewer. Why, after all, were these photographs made? Neither Dammann nor Werzel speculate too much. But it seems unlikely that all the photos were conceived simply as personal mementos of wartime antics. It’s more plausible that many of the photos were made for much the same reason that Nazis frequently made photos of their comrades shearing the beards of Jewish men—to create a kind of trophy, a monument to the might of the Reich.

This possibility is rendered most explicit in the photographs where cross-dressing is a key part of a violent tableau. One documents a cross-dressing soldier kneeling before a group of his shirtless comrades as they point their bayonets; in several others, the cross-dresser is being groped by some grinning senior official. Viewing these images in particular, it’s hard not to recall just how much danger cross-dressing posed for enemies of the Reich. In the Weimar Republic, those inclined to cross-dress were often issued “transvestite passes” by physicians, which kept them safe from police harassment. One of these physicians was the gay Jewish sexologist Magnus Hirschfeld, who advocated for gay rights and researched gender and sexual identity through his Institute of Sex Research. The same year Hitler became German chancellor, one of the Nazis’ first orders of business was to destroy the Institute and burn its contents. Many “transvestite pass” holders, in all likelihood, were subsequently murdered.

Perhaps some of the men in Soldier Studies were people for whom Hirschfeld might have advocated if they’d had the freedom to express themselves, and surely some would have gladly destroyed Hirschfeld’s Institute. Dammann asserts that these photos possess unusually clear evidence of “homo- and transsexual orientation,” but the claim is questionable at best. That’s what makes it hard to buy Werzel’s conclusion that Soldier Studies presents a triumphant correction to the “Aryan view of history.” In these photos, it’s possible to see evidence of ordinary men savoring an unusual glimmer of freedom. At the same time, it’s possible to see cruel men making a show of their power. The result is a kind of double vision that suggests the way Soldier Studies might most usefully be read: as an ambiguous yet compelling perspective on the banality of evil.