In Patrick Modiano’s fictions of Vichy France, collaboration is not as it appears. 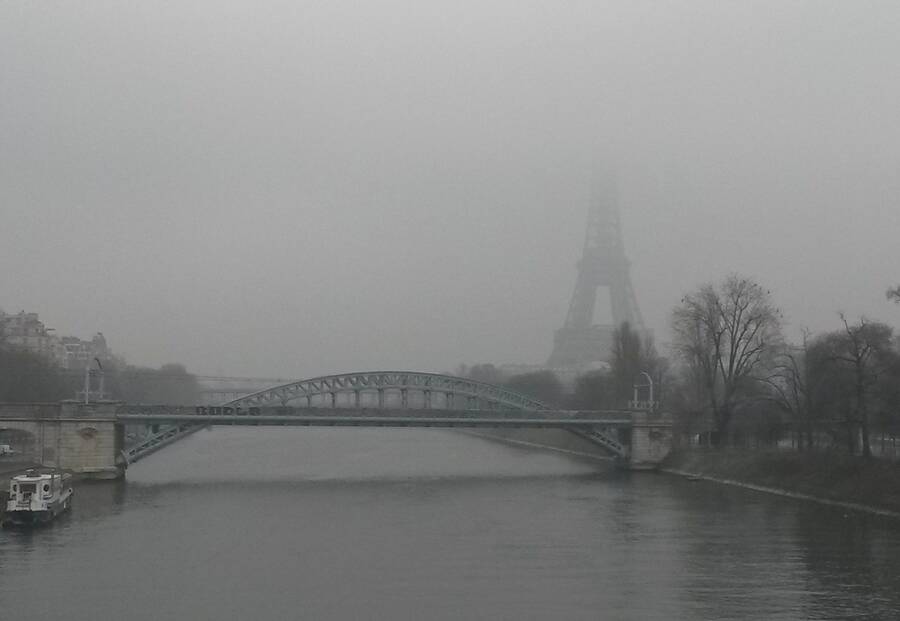 THE SLEEK, SEPIA-TONED FICTIONS of Patrick Modiano draw their melancholy from memory’s beguiling lapses. Where Marcel Proust, Modiano's countryman and precursor, wrote of the past’s involuntary return, Modiano’s work is predicated on its irrevocability. His novels and stories are set in a postwar Paris saturated with the residue of the city’s recent occupation; his protagonists search for clues that will grant them more complete access to this blurry, estranged realm. Insignificant detritus—a disconnected phone number, a half-remembered address, a scrap of newspaper—acquires the numinous fragility of religious relics. These enigmatic materials activate plots that are almost algorithmic in their limited variation. There is the teenage Modiano stand-in, the young woman in some vague trouble, the oblique criminal element, the singer or circus performer, the threat of police. The novels give off a noirish sheen—Renaults in lamplight, Glen plaid suits, shadows and silhouettes—even as they withhold the startling denouements promised by crime fiction. The expected resolution never occurs. Instead, each novel dramatizes its own inconclusiveness. Taken together, these occluded works comprise a grand, rigorously sustained appraisal of memory.

Modiano was born in the suburbs of Paris in 1945 to a Belgian mother (an actress who appeared, briefly, in Jean-Luc Godard’s Bande à part) and a Sephardic Jewish father, whose black market racketeering enabled him to emerge from the Occupation unscathed. The essential mystery of his father’s criminality—the elder Modiano never disclosed to his son the exact nature of his crimes—fogs the surface of his novels, many of which feature a small-time crook whose ill-defined though plainly nefarious dealings cast a spell on an adolescent protagonist. Modiano pursues this surrogate figure from guise to guise: Brossier in Young Once (1981), Jacques in After the Circus (1992), Aghamouri in The Black Notebook (2012), Roger Vincent in So You Don’t Get Lost in the Neighborhood (2014). They charm, manipulate, often pay handsomely, and inevitably disappoint or disappear. The hazy criminality of Vichy France’s collaborationist milieu makes it easy to overlook the fact that, in Modiano’s oeuvre, personal negligence—not political cowardice—is the original sin.

After three decades of celebrated fiction, Modiano’s later experiments with nonfiction and autobiography would prove to be derivations rather than true disruptions. The first of these, 1997’s Dora Bruder, found Modiano bypassing his usual proxies, as he documented an investigation he himself undertook into the disappearance of a young Jewish girl a half-century after the fact. This was followed by his 2004 memoir, Pedigree, an evocation of the appealingly louche Paris of his youth, what he calls “the soil—the dung—from which I emerged.” Despite the ostensible facticity of their settings and characters, these books nonetheless read like typical Modiano novels. The iterative nature of his nonfiction, like his fiction, suggests an obsessive siphoning from memory.

In its contemplative intimacy, Family Record, a collection of 15 loosely connected stories originally published in 1977 and recently issued by Yale University Press in an English translation by Mark Polizzotti, prefigures these more straightforwardly autobiographical efforts. Its seamless blend of memoir and invention is classic Modiano—made manifest in its bewitching ambience, vague menace, and muted longing—though its cumulative effects strike me as uniquely personal among his fictions. Much of this can be attributed to its loose, fragmented, album-like arrangement. The drifting, disparate stories allow Modiano’s narrators—some go by Patrick, while others remain unnamed—to cycle through various stages of youth and middle age, nostalgia and disenchantment. Each vignette’s central preoccupation is the instability of identity, the contours of which are threatened constantly by ambivalence, displacement, and the subtle revelations of family history.

Family Record begins with the birth of the narrator’s daughter, which sets in motion a simple task—that is, registering the child’s name at the Office of Records—though escalating anxieties soon make clear the outsize significance this errand holds for the new father. “The title evoked the same respect I feel for all official documents,” he explains, “diplomas, notarized transactions, genealogical charts, zoning ordinances, archival papers, pedigrees.” Legitimacy, then, is a matter not only of blood, but of authorization; for Modiano, civil validity assuages the specter of exile and his own misbegotten youth. Terrified that the office will close before he arrives, he sets out immediately after the birth, only to meet an old associate of his father’s, Koromindé, on the way. The older man trails behind him a sordid past, one inextricably bound to the narrator’s father. (Koromindé remembers how the narrator’s father had used a fake name on his marriage certificate; surely an opportunity squandered.) At the end of the vignette, the registry signed at last, there is a sense of a great cycle of ignominy having been broken. “We had just participated in the beginning of something,” the narrator says. “That little girl would in some way be our delegate to the future. And on her very first try, she had obtained the mysterious possession that had always eluded us: a civil status.”

The elusiveness of this sanction, always painfully close though rarely attainable, animates much of Family Record. In another story, a teenaged narrator meets an older man named Henri Marignan—“Sometimes he seems to be one of my father’s multiple incarnations,” the narrator writes—who tells the young man of his desire to return to China. He explains how he had lived there in his 20s, publishing a daily paper in Shanghai, and eventually serving as an adviser to the Ministry of Communications under Chiang Kai-shek. But having returned to Paris, he undertook mysterious “missions” between Vichy and Lisbon during the Occupation, “when [he] still officially existed and wasn’t the ghost [he was] today.” Like many of Modiano’s vaguely illicit elders, Marignan has inhabited the past for so long that he fails to notice the amber has hardened, trapping him there. Eventually, he asks a shadowy associate, George Wo-heu, to aid him in his bid for Shanghai. Marignan promises to bring the narrator along with him on this final adventure. But the plan inevitably stalls; Wo-heu’s contacts prove unwilling or incapable. He cannot procure the necessary documentation, which Marignan will never stop awaiting. Dragged into the undertow of his friend’s anticipation, the narrator concludes:

The days went by. We hardly ever left the café. We let ourselves be overcome by a kind of despondency. We still experienced moments of hope and elation, the certainty that we would be leaving soon. But the seasons changed. Soon there was nothing around us but a tender fog, pierced by the ever hazier contour of George Wo.

Almost 30 years before the terse reveries of Pedigree, Family Record finds Modiano in full pursuit of his parents, who show up in the stories again and again. Sometimes they appear in the usual sinister interludes—in one story, the narrator is taken on a hunting trip with his father’s criminal coterie—though these are balanced by gentler idylls. The most affecting of these comes near the book’s end, when the narrator discovers, by chance, a listing for the apartment he grew up in with his mother, father, and late brother. While visiting the river-view unit on Quai Conti under the pretense of being an interested renter, he is overcome by the depth of time the apartment contains. The sky blue paneling remembered from childhood is gone, but the wall still “bore traces of . . . fabric, remnants of the occupants before my parents, and it occurred to me that if I scraped away these bits of fabric, I’d discover miniscule fragments of still older layers.” This material representation of memory casts the narrator into dreamlike preoccupation; he peels away at temporal surfaces until he is interrupted by the brilliantined realtor, who asks what he thinks of the view. Peering through the veil of the past, the narrator is unsure how to answer.

Modiano’s Jewishness is often something of a hidden current in his work, a force of weak attraction. In the collection’s longest story, the narrator, working as a French tutor in Lausanne, recognizes a radio host, Robert Gerbauld, as the Jewish Affairs officer who once interrogated his father: “And so, right near me, sat the man who had been responsible for several thousand deportations in the years 1940 to 1944, the one who directed the ‘squads’ of Rue de Greffulhe, from whom my father had miraculously escaped.” Whereas Modiano’s first novel, La Place de l’Étoile, openly satirized the myth of a heroic wartime Republic, Family Record’s investigations of Jewish experience during the Occupation—what he called “the great primordial darkness” in his 2014 Nobel speech—are far more typically subtle, little theaters of mysterious inaccessibility. Just as the narrator is about to confront Gerbauld, he experiences a Hamlet-like hesitation over his capacity for retribution. “It would mean nothing to him anymore,” he reasons. “Memory itself is corroded by acid.”

To shore up such corrosion with reinforcing detail is Modiano’s only recourse. There is a ravenous hunger at the heart of his work, no matter how lean, how elegant the prose. It manifests as an insatiable appetite for names and dates, streets, addresses, letters, signs, anything that returns the pressure of history when uttered or touched. It is the disquiet of his fiction—the vaguely hellish quality of a movie played reel-to-reel, endlessly—that the means of his salvation is also the greatest source of his torment.

The short, final story of Family Record sees the narrator and his wife and child driving through Paris in the back of a taxi. They pass the arrondissements of his youth, the apartments, parks, hotels, and gardens all occupying two or more registers of time. He holds his sleeping daughter, whose innocence has a subtractive quality for her father, a privileged emptiness synonymous with grace: “She didn’t yet have any memory.”

Dustin Illingworth is a writer in Northern California.