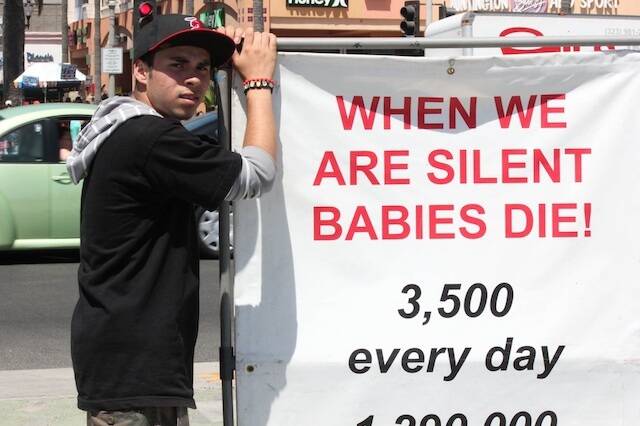 LAST MONTH, Alabama passed the most extreme anti-abortion law in the United States, effectively banning abortions even in cases of rape or incest. The law determinedly runs afoul of Roe v. Wade, and that’s the point: the anti-abortion movement hopes the Alabama law and others like it will be challenged all the way to the Supreme Court and ultimately lead to the overturning of Roe. But it does something else insidious as well, easily overlooked in this emergency climate for reproductive rights: it frames abortion in America as a genocide at a historically unprecedented scale, larger and graver even than the Holocaust. In other words, it exploits the memory of the Holocaust and diminishes its gravity at the same time—a strategy with a long, dark history in the anti-abortion movement, now codified into law.

The Alabama law opens with reminders that the state has already taken drastic measures in the direction of outlawing abortion, recently passing a constitutional amendment that recognizes “the sanctity of unborn life and the rights of unborn children,” and changing the penal code to recognize fetuses as persons in the context of prosecuting homicides. But it quickly moves on to a roll call of crimes against humanity, with abortion outranking the Holocaust at the top of the list. According to the law, “More than 50 million babies have been aborted in the United States since the Roe decision in 1973, more than three times the number who were killed in German death camps, Chinese purges, Stalin's gulags, Cambodian killing fields, and the Rwandan genocide combined.” The claim is astonishing, but it is not new. The specter of genocide, and the Holocaust in particular, have been dragged into the messaging strategy of the anti-abortion movement from its beginnings.

The Holocaust began to appear in anti-abortion messaging at the outset of the modern anti-choice movement in the years just before Roe v. Wade. Initially, the National Right to Life Committee—the oldest, largest, and most mainstream anti-abortion organization in the US, founded in 1968—tried to bill itself as part of the civil rights movement, claiming that the “abortion industry” victimized women by coercing them into a harmful procedure. When that approach failed to win converts, anti-abortion activists learned a lesson, said sociologist Deana Rohlinger: “If the debate is about women, you lose. But if the debate is about babies, you win.” Messaging was particularly effective when abortion was depicted as a crime against the unborn being practiced on a sweeping scale. Eventually, the movement began framing abortion as a modern Holocaust, and brought it to those they believed would be most easily persuaded by it: youth and students. Anti-abortion groups took their message to college campuses around the country, juxtaposing oversized images of abortion procedures with pictures of Holocaust victims and arguing for their moral equivalence. An organization called Survivors of the Abortion Holocaust declared anyone born after 1973 a survivor.

Seeing this strategy as a success, anti-choice activists quickly upped the ante. “The [anti-abortion] movement very early on insisted on showing that legal abortion was akin to the Holocaust, but also worse than the Holocaust,” said historian Jennifer Holland. “From the 1970s onward, they start calculating numbers, say[ing], ‘Look—this is even more than 6 million Jews.’ Then, they make the claim that legal abortion is worse than the Holocaust because fetuses are inherently innocent and helpless in a way that any born person cannot be. They often say, ‘At least the Jews could fight back.’”

Comparing abortion and the Holocaust also dovetailed with another strategy of the anti-choice movement: linking abortion to eugenics. Prior to the passage of Roe v. Wade, the movement attempted to portray Japan and Sweden, which had already legalized abortion, as engaged in eugenic projects, but the charge that these ethnically homogeneous states were attempting to eliminate racialized populations did not stick; indeed, this was one reason the movement shifted to portraying abortion as genocidal in and of itself. They also eventually adopted the argument that abortion rights in the United States amounted to a eugenic campaign designed to limit black population growth.

This rhetoric is still prevalent, both in the conservative mainstream (as Justice Clarence Thomas’s recent comments would suggest), and among its fringe elements. The white nationalist anti-choice group Life Dynamic’s KlannedParenthood campaign, for instance, sarcastically praises abortion providers for outdoing the Ku Klux Klan “when it comes to killing black children,” before reminding readers that “there is practically no difference” between Nazi death camps and America’s “abortion holocaust.” Other activists have circulated the perverse argument that, if the unborn are under genocidal attack, then fetuses themselves must qualify as a racialized identity group, in which case abortion is racist tout court. Such grotesque claims have helped to build a strong alliance between the anti-abortion and white nationalist movements that has become increasingly visible, with anti-abortion leaders tweeting white nationalist content after Donald Trump’s election, neo-Nazi groups attempting to join anti-abortion rallies, and congressman Steve King, a darling of the white nationalist movement, spearheading extreme anti-abortion legislation in his home state of Iowa.

Because American Jews are more pro-choice than any other religious group, with a clerical leadership widely outspoken on the topic, anti-abortion activists “often imply and even outwardly state that Jews are participating in a current genocide and were thus ideologically complicit in the Jewish Holocaust,” Holland said. Not surprisingly, deadly attacks on abortion providers by anti-choice activists have sometimes overtly overlapped with antisemitic violence. Eric Rudolph, who bombed abortion clinics in the South before becoming famous for his attempt to bomb the 1996 Olympics in Atlanta, was a noted Holocaust denier. Rudolph belonged to an anti-abortion extremist organization called Army of God, as did James Charles Kopp, who assassinated abortion provider Barnett Slepian as he walked home from synagogue one Friday night in 1998. Kopp tracked Slepian down through a website run by an anti-abortion group called the Nuremberg Files (a riff on the Nuremberg Trials). At the time of Slepian’s murder, the Anti-Defamation League said that while there was no evidence of antisemitism in the killing itself, there was a notable history of antisemitism in the anti-abortion movement, one often used explicitly to target Jewish abortion providers.

By using the Holocaust as a rhetorical device in pursuing an extreme anti-abortion agenda, anti-abortion activists and lawmakers efface the history of actual genocide in service of a religiously-backed political agenda—all of which has become fodder for the white nationalist movement. Following in the footsteps of the anti-abortion movement, white nationalists have become skilled at turning unthinkable claims into polite conversation. Today, explicitly racist, anti-immigrant, and antisemitic rhetoric has been legitimized as previously unimaginable attacks on reproductive rights are being codified. The use of the Holocaust as an anti-abortion rhetorical device has helped pave the way for decades.


Jennifer Gerson is a Maggie Award-winning journalist whose reporting on reproductive rights, women's health, and sexual violence appears in The Guardian, Teen Vogue, Cosmopolitan, and elsewhere.

Report
Progressives Introduce Amendment to Force US Investigation into Israel’s Killing of Shireen Abu Akleh
The amendment comes after the State Department released a waffling statement on the death of the Palestinian American journalist.
Alex Kane
Report
Progressive Lawmakers Demand Stop to Israeli “War Crime” in Masafer Yatta
In a letter to the Secretary of State, 15 House Democrats urged the administration to intervene against the expulsion of Palestinians from West Bank villages.
Isaac Scher

Essay
Bela’s Pilgrim
The story of my salvation
Bela Shayevich
Dispatch
The Passion of 964 Park Place
A standoff between tenant organizers and yeshiva students over the fate of a Black family’s home summoned the specter of the Crown Heights riots, and provided an object lesson in housing activism at the end of the Covid eviction moratorium.
Ari M. Brostoff
Sign up for our email newsletter, featuring exclusive original content
Subscribe