American Uses and Misuses of the Holocaust 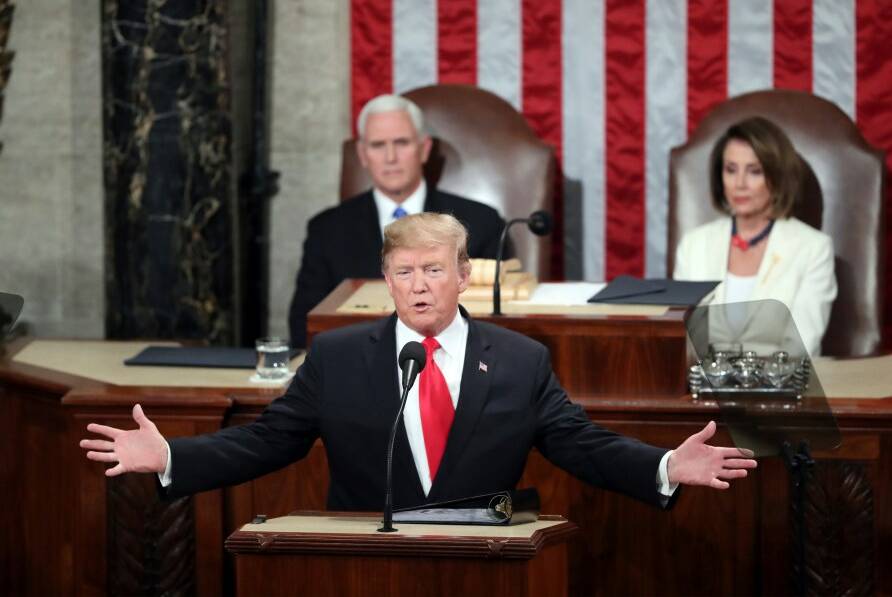 IN JANUARY 2017, a week into his presidency, Donald Trump released a statement on Holocaust Remembrance Day that conveniently omitted any mention of “Jews” or “antisemitism.” Facing blowback, the administration clarified that their wording was intentional, designed to recognize other victims of the Holocaust besides just Jews. Historian Deborah Lipstadt accused the administration of “softcore Holocaust denial,” obscuring the fundamental goal of Nazism: the annihilation of Jews. The statement was another piece of evidence that Trump was sympathetic to antisemitism, especially given his campaign’s energizing of white supremacists and his choice of Steve Bannon as his chief strategist.

Two years later, in Tuesday’s State of the Union address, the president appeared to have changed his tune. In the section of his speech on national security, Trump glided smoothly from discussing sanctions against Iran to acknowledging and applauding two Jewish Holocaust survivors, including one who also survived the massacre at Tree of Life synagogue in Pittsburgh. “We must never ignore the vile poison of antisemitism, or those who spread its venomous creed,” he said.

Some found this convincing. Following the speech, Anti-Defamation League CEO Jonathan Greenblatt congratulated Trump on Twitter: “Good to see @POTUS speak out clearly against #antiSemitism, remembering its victims and honoring survivors from the Holocaust to Pittsburgh.” Left-wing Jewish organizations were less impressed. Bend the Arc tweeted: “The legacy of the Holocaust demands that we reject state-sanctioned bigotry and welcome immigrants, refugees, and all peoples. Instead, Trump used Jewish pain & trauma to prop up his racist, authoritarian agenda.”

Dubious usage of the Holocaust by American politicians—especially to improve their standing with the American Jewish community—predates the 45th president. Jimmy Carter, for example, pushed the opening of a US Holocaust Memorial Museum in part to repair his relationship with American Jewish community representatives upset about his endorsement of a Palestinian homeland. In general, American politicians’ zeal for addressing the Holocaust has always been perplexing. Why is a country so generally bad at commemorating racist tragedy (see: Confederate monuments)—and so reluctant to address the racism that once impressed the Nazis—so dedicated to memorializing the Holocaust?

There are some straightforward reasons for the “Americanization” of the Holocaust. The United States has the most Jews in the world after Israel, and a relatively large population of Holocaust survivors. Many of those individuals have worked hard to educate other Americans about their history, especially as details of the Holocaust were relatively unknown in American culture in the first few decades after the war.

But there are other reasons, too, that a Holocaust museum was built on the National Mall decades before the Museum of African American History and Culture. In the Holocaust narrative, Americans figure in as liberators, not as oppressors. Unlike, say, the slave trade or the genocide of Native Americans, the Holocaust can be memorialized without overwhelmingly detracting from the creed of American exceptionalism. The council charged with planning the US Holocaust Memorial Museum wrote, as a justification for establishing such a museum in DC,  “This Museum belongs at the center of American life because as a democratic civilization America is the enemy of racism and its ultimate expression, genocide”—a sentiment that should be laughable for anyone casually acquainted with this country’s history.

To be fair, American Holocaust memorialization is not solely about the rosy side of American involvement in the Holocaust; it has often incorporated criticism of the United States’ lack of preventative action. In his 1979 introduction to the report of the President’s Commission on the Holocaust, Elie Wiesel wrote, “How many victims, Jews and non-Jews could have been saved had we changed our immigration laws, opened our gates more widely, protested more forcefully. We did not. Why not?” The commission recommended that an American Holocaust museum acknowledge both the United States’ success in participating in the camps’ liberation and its failures at preventing the Holocaust. But, as cultural historian Amy Kaplan argues in Our American Israel, the narrative of American guilt has had less cultural resonance than the elevation of the American GI as Holocaust rescuer. And in some cases, even the criticisms of United States’ policy have served to endorse the importance of American military might. When it opened, the Holocaust museum had an exhibit arguing that bombing Auschwitz would have saved lives (a fact that is actually debated by historians), which, Kaplan says, became a talking point for proponents of American military intervention in later conflicts.

Throughout the years, presidents who have visited the US Holocaust Memorial Museum have used their speeches to point at violence across the world. George W. Bush used his 2007 visit to the US Holocaust Memorial Museum to discuss his approach to genocide in Sudan. In a 2012 visit, Obama discussed his administration’s approach to human rights crimes in Sudan, Côte D’Ivoire, Libya, and Uganda. Keeping an eye open to international violence is crucial. But the cumulative effect is that the US is always painted as disapproving bystander, never perpetrator. State-backed crimes against humanity, these politicians suggest, happen far from America. Therefore, speeches about the Holocaust become an opportunity for patriotism.

In Ronald Reagan’s speech at a 1983 gathering of Holocaust survivors, he acknowledged that the US did not have a “spotless” record of avoiding bigotry, but went on to describe the US as uniquely responsible for guarding the memory of the Holocaust because of its superior moral standing as a nation. “Earlier, I described our country as a compact between good and decent people,” he said. “I believe this, because it is the love of freedom, not nationalistic rituals and symbols, that unites us . . . We are the keepers of the flame of liberty.”

Similarly, in a speech for the Holocaust Memorial Museum’s dedication in 1993, Bill Clinton deliberately emphasized the contrast between the hateful world depicted inside the museum and the open American society outside its walls: the presence of a American Holocaust museum would “bind one of the darkest lessons in history to the hopeful soul of America.” He added that “it is particularly appropriate that this museum is here in this magnificent city, an enduring tribute to democracy.” Clinton conveniently left out Washington DC’s long history as a slave trade stronghold and then a city under Jim Crow.

On Tuesday, Trump followed his predecessors, taking an unsubtle approach to using the Holocaust to make the US look good. He retold Judah Samet’s story of being liberated by the Americans, and quoted survivor Joshua Kaufman’s recollection that “the American soldiers were proof that God exists, and they came down from the sky.” The story placed the United States firmly in the role of savior. Trump used the Holocaust to project a benevolent image onto the American soldier while, in the same speech, calling for the deployment of 3,750 of those soldiers to the border to prevent migrants from entering.

My great grandfather left Lodz, Poland in the 1920s, chased out by worsening antisemitism. At the time, a racist, restrictive quota system prevented him from immigrating to the United States, so he went to Canada and slipped over the border into the US, living undocumented until 1946, when he was granted citizenship. Twenty more years in Poland and, more likely than not, he would have been murdered. A safe place to land saved him from the Holocaust; restrictive immigration policies doomed many others.

There are stories to tell about the Holocaust that don’t cast America in the role of godlike liberator, and there are reasons Trump isn’t telling them. It’s not hard to draw lines from the American border policies that doomed Jewish refugees during the Holocaust to the proposed border wall in Trump’s State of the Union. It’s also not hard to connect Nazi propaganda about Jews as criminals and degenerates to Trump’s racist dehumanization of migrants and refugees. Holocaust survivors themselves have described seeing echoes of their own traumatic experiences in Trump’s policy of separating immigrant families.

Trump’s use of the Holocaust to bolster American exceptionalism and ignore American failures is nothing new. But we must not fall for it. It’s time to commit to a politics of Holocaust remembrance that includes turning inward, holding the American state—its history and its present—up to the light. If we’re doing it right, we won’t like what we see.

Report
How a Giant of Responsible Investing Agreed to an Israel Exception
After a multi-year campaign by Jewish groups, Morningstar—a major firm known for socially responsible investing—is softening its approach to Israeli human rights abuses.
Mari Cohen
Newsletter
The State of Antisemitism Reporting
How America’s major newspapers have stumbled in covering a serious phenomenon
Mari Cohen
Sign up for our email newsletter, featuring exclusive original content
Short on time?
Sign up for our weekly Monday roundup of everything you missed in Jewish Currents last week.