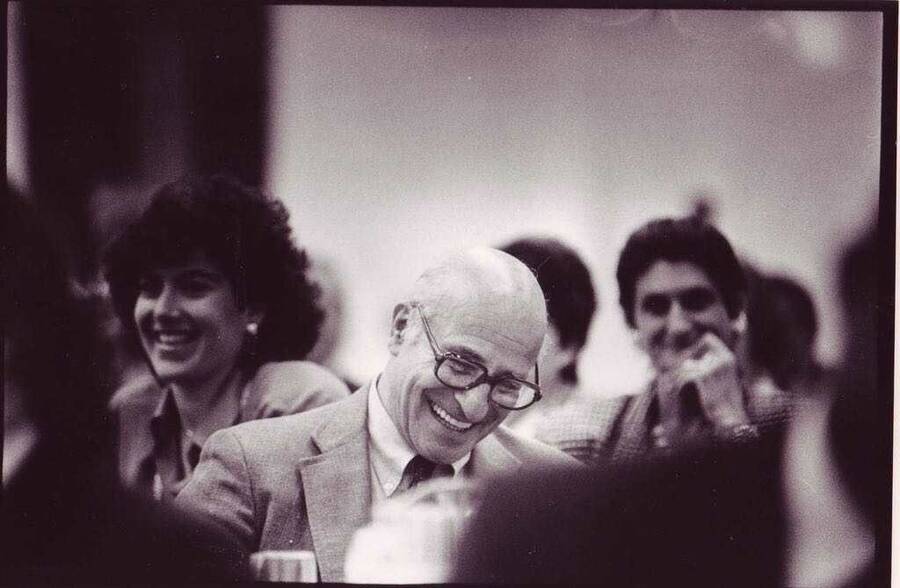 PROGRESSIVE AMERICAN JEWS have often been mistrustful and even scornful of mainstream Jewish leaders. The critique runs something like this: Their organizations are dominated by wealthy donors and overpaid executives; they claim to represent the Jewish community but are unelected and unaccountable; they withhold and actively suppress criticism of Israel’s occupation policies; and they treat the Jewish left as invisible at best, and antisemitic at worst.

Albert Vorspan, who was the vice president and social action sparkplug of the Reform synagogue movement from 1953 until 1993, was a standout exception to this portrait: He never earned a six-figure salary; he was not a rabbi and had none of the grandiloquent pretentiousness common to that profession before women came in and changed rabbinical culture; he rooted his leadership in the congregations of Reform Judaism, visiting them endlessly over the decades, and inspiring them to launch social action committees.

He also was a dissenter on Israel; a passionate Zionist since his youth in St. Paul, Minnesota, Al was appalled by Israel’s betrayal of his own idealism. In 1988, he faced sharp ostracism and broken relationships with other professionals in the American Jewish community after writing a hand-wringing piece in New York Times Magazine about Israel’s brutal crackdown on the Palestinians during the First Intifada. Hardly anyone else in the Jewish mainstream was criticizing Israel for its twenty-plus years of occupation and settlement-building, but Al saw what he described as “the political and moral bankruptcy of Israeli policy” and predicted the “danger of alienation unless there are Jewish voices of dissent that publicly address the anxieties Jews share . . . The longer this disaster continues, the greater the danger of Jews’ simply turning off and turning away from Israel.”

Though I hadn’t yet met him at the time, my awareness of Vorspan’s “difference” led me to invoke his name in a rural highway diner in New York in 1984. Burning up my unemployment insurance benefits after leaving my post as assistant editor of Jewish Currents, I was anxiously trying to figure out what my next career move might be. My wife Susan and I were sitting at the counter, with only one other customer in the joint. Susan was lobbying me to stop working as a “professional Jew” and to try to find work with a leftwing publication like The Nation or Mother Jones. “Maybe I could do that,” I replied, “but if I could take what I know into the liberal Jewish mainstream—if I could work, say, for Al Vorspan!—I would happily do that and spare myself the job search.”

That “only other customer” turned out to be Al’s brother-in-law. He came right over, dragged me to the pay phone, and we called Al Vorspan together. Two weeks later, Al and I were coauthoring a children’s book. He then handed me over to Rabbi Alexander M. Schindler, his boss at the Union of American Hebrew Congregations, who retained me as a speechwriter for the next 13 years. (“And you call yourself an atheist,” Al later said to me.)

Al himself was a terrific writer, a satirist in the vein of Mark Twain or Sholem Aleichem. His book titles included Start Worrying: Details to Follow; So the Kids Are Revolting . . .?; and I’m OK, You’re a Pain in the Neck. It was his political writing, however, that had the most enduring impact. In 1961, Al coauthored the founding documents of the Religious Action Center of Reform Judaism (RAC) in Washington, DC, creating an institution to embody the movement’s commitment to “prophetic Judaism”—and especially its commitment to the civil rights movement. Both the Voting Rights Act of 1964 and the Civil Rights Act of 1965 were drafted at the RAC. Al himself attended numerous civil rights actions in the South and tried to nudge Southern Jewish Reform congregations to support the anti-racist movement. Arrested in St. Augustine, Florida in 1964, where Al joined 16 rabbis who had been invited by Martin Luther King, Jr. to help undermine segregation, he collaborated on a jailhouse letter that declared that “injustice in St. Augustine, as anywhere else, diminishes the humanity of each of us. We came as Jews who remember the millions of faceless people who stood quietly, watching the smoke rise from Hitler’s crematoria . . . ” Later in the 1960s, Al was among the first “professional Jews” to write in dissent against the Vietnam War.

But my favorite of his writings was quieter, more personal. “My Wife Has Alzheimer’s, But She’s Great in Bed,” which Al wrote at 92, and which we published in Jewish Currents, was a poignant piece of rhyming verse that described his wife Shirley’s decline into the disease, and how lying with her, holding hands in their bed, would keep her calm whenever her evening terrors descended:

Sometimes I simply lie there and cry
While she prays, she says, that I won’t die
The night is long, the sleep arrests
Our terrible sense of hopelessness . . .

By then I was visiting Al about twice a month at Woodland Pond, a continuing care facility near my home, which he described as his “Last Resort.” Al’s mentshlikhkayt (full humanness), which I had observed over the years I was speechwriting for Schindler, had aged like the proverbial fine wine: He was still brimming with fantastically entertaining stories and jokes, but his chastening trials—his wife’s Alzheimer’s, his own prostate cancer, his uncertainty about paying the bills for this expensive Last Resort, his dependence on his children, his loss of professional status—had leavened his personality with introspection, elevated generosity, and emotional accessibility. We shared lots of laughs, lots of “shop talk,” and several very intimate conversations. I fell in love with the old man, and I was delighted to accept his invitation to help him produce his final work, Dying at Ninety-Five Is the Least of My Worries, a forthcoming scrapbook of writings (he was still producing new material) and photographs that span a remarkable life of striving for social justice.

At Al’s funeral service this week, Rabbi David Saperstein, whom Al mentored and hired to lead the RAC, recounted how at many of Saperstein’s appearances, people asked him to send their personal regards to Al Vorspan. This came, Saperstein said, from people who had met Al only once or twice, but felt the power of his attention, his energy, his humor, his mentshlikhkayt, and therefore felt certain that Al would remember his encounter with them.

Al clinched my devotion to him after his beloved wife of 72 years died last August. I left on a two-week road trip before the funeral, and I failed to make a condoling phone call. Within days, Al was calling me—not to upbraid me for neglecting him, but to make sure I was okay. I was floored by his assumption of my own mentshlikhkayt, and by his concern for me in the midst of his mourning. I pledged to myself that I would start fulfilling the mitsve of gemilut khasadim, lovingkindness, more diligently in this life; I told Al that I loved him and that I would be back at work on his book very soon.

Lawrence Bush is editor emeritus of Jewish Currents and the author of PINKO JEW: Essays and Artworks.

History
How Jewish Currents Covered the Soviet Jewry Movement
Even once the magazine accepted the evidence of Soviet antisemitism, it continued to distrust the politics of the mainstream campaign.
Lawrence Bush
Blog-Shmog
JEWDAYO Rocks: Jewish Rock and Roll Dates for August
Lawrence Bush
Sign up for our email newsletter, featuring exclusive original content