A Threat, Not an Offer

Trump and Netanyahu’s so-called peace plan is designed to be unacceptable to Palestinians, to justify the repression that will follow. 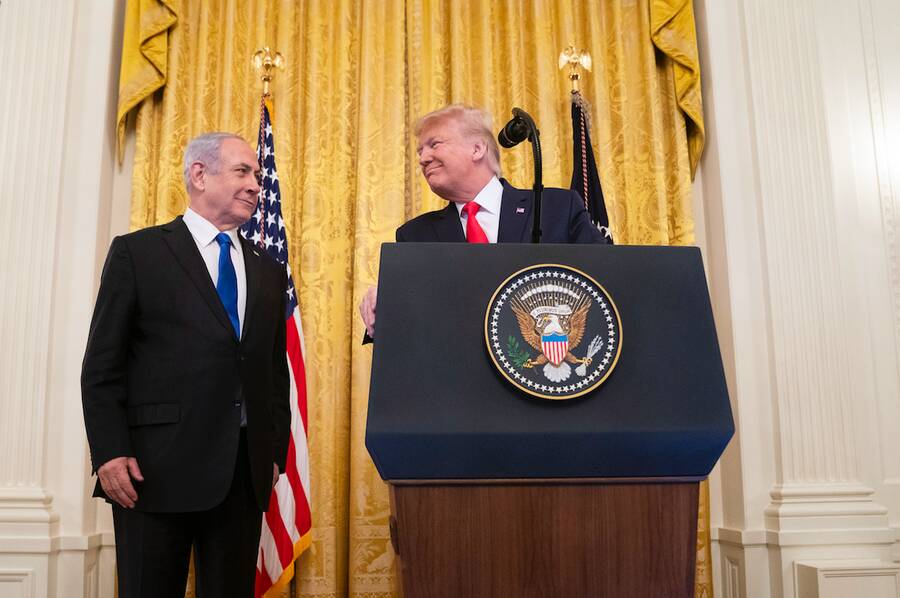 DONALD TRUMP released his long-awaited plan to resolve the Israeli–Palestinian conflict yesterday during a joint address with Israeli Prime Minister Benjamin Netanyahu. “Today, Israel takes a big step toward peace,” Trump told the right-wing and establishment Jewish leaders, Republican donors, and evangelical Christian pastors who had gathered in the East Room of the White House. “My vision presents a ‘win-win’ opportunity for both sides,” the president continued, “a realistic two-state solution that resolves the risk of Palestinian statehood to Israel’s security.”

Yet to accept that the Trump administration’s proposal actually contains a viable two-state solution or constitutes a “peace plan” would be to take at face value the doublespeak that has become a hallmark of the Trump era. The proposal—or “Vision,” as the 181-page document calls itself—is not principally about peace: its main purposes are to guarantee Israeli control over the maximum amount of territority and to guarantee Palestinian subjugation in perpetuity.

It is also not a plan in any real sense, for it is not intended to be implemented. The details of the proposal suggest that the Trump administration all but certainly expected the Palestinian leadership to reject it. Indeed, they already have. “We say a thousand times over: No, no, no,” Palestinian President Mahmoud Abbas said following the plan’s release. “Trump and Netanyahu declared the slap of the century, not the deal. And we will respond with slaps.”

The Trump administration’s proposal is one that no Palestinian leader could accept. It gives the Israeli government the green light to annex the Jordan Valley and nearly all Israeli settlements in the occupied West Bank. Despite misleading early reports that the plan would include a Palestinian capital in East Jerusalem, it recognizes Jerusalem as the “undivided” capital of Israel and suggests several Palestinian neighborhoods east of Jerusalem, beyond Israel’s separation barrier—Abu Dis, Kufr Aqab, and Shuafat—that could be renamed “Al Quds” (Arabic for “Jerusalem”) and designated the capital of a future Palestinian state. And while the proposal outlines such a nominal Palestinian “state” on the remaining territory of the West Bank, it would not be a geographically contiguous state, but instead a scattering of Palestinian enclaves connected by, in Trumpian business argot, “state-of-the art infrastructure solutions,” such as an underground tunnel connecting the West Bank and Gaza.

The proposal disingenuously frames Israel’s relinquishing of claims to the land on which the hypothetical Palestinian state would be built as “significant Israeli concessions” (the implication is that Israel has the right to that land and is magnanimously conceding it, which is not the international community’s consensus on the status of the occupied territories). Provided the Palestinians were to accept the proposal as the basis for negotiations, it entails additional “concessions” that Israel is unlikely to make, such as a four-year freeze of new settlement construction outside of the areas already slated for annexation. And as supposed compensation for Israel’s annexation of West Bank settlements like Ariel, which sits on major water resources, the Palestinians would also receive scraps of the Negev desert south of Gaza along the Egyptian border.

But while the Trump proposal is in some ways unprecedented—no previous US president has ever given explicit approval of formal Israeli annexation of parts of the West Bank—it is less a break with the status quo than its unmasking. The style of Tuesday’s announcement may have marked a stark contrast with the older, more dignified mode of American diplomacy (after Trump and Netanyahu’s speeches, “What a Wonderful World” played over the speakers), but the “Vision” document is not wrong in its claim that what the Trump proposal contains is not so different from what US and Israeli leaders have long referred to as the two-state solution. A demilitarized, rump Palestinian state (or “state-minus” as Israeli Prime Minister Yitzhak Rabin once called it); Israeli sovereignty over the large settlement blocks and the Jordan Valley; Israeli military control over everything else, from the air, to the roads, to the energy infrastructure—these have been the de facto goals of bipartisan US administrations over the past several decades.

The Trump proposal is also consistent with the logic that has guided nearly all earlier US attempts to resolve the Israeli–Palestinian conflict, including the Oslo Accords: an absolute commitment to the primacy of Israeli security paired with an at best tentative committment to the full realization of Palestinian human rights. Supporters of a two-state solution have always claimed to be opposed to the permanent subordination of the Palestinians, even as they allowed steady Israeli settlement construction without any economic or diplomatic consequences. On Tuesday, Trump, whether intentionally or not, called their bluff, revealing the two-state solution and Palestinian dispossession to be one and the same.

Of course, for all the continuities between the Trump proposal and previous US-led peace plans, there are significant discontinuities. In addition to giving Israel full control of Jerusalem, including oversight of the city’s holy sites, the plan includes a provision that would allow Jews to pray at the Temple Mount/Haram al-Sharif, which would constitute a significant and provocative rupture with the status quo. Although Jews can enter the Temple Mount complex under certain regulations, they are not permitted to pray there or to display Israeli nationalist symbols. In recent years, religious Zionists, arguing that Israel should have complete control over the site, have increased their efforts to enable Jews to pray there, leading to violent confrontations with the Muslim religious authorites who operate the site, as well as Muslim worshippers.

When it comes to the status of Palestinian refugees—the descendants of the roughly 700,000 Palestinians who fled or were expelled from their homes in 1948—the plan stakes out an even more anti-Palestinian line. It absolves Israel of any responsibility for the Palestinian refugees and proposes to dismantle and terminate the United Nations Relief and Works Agency for Palestine Refugees in the Near East (UNRWA), which provides crucial aid to more than 5 million Palestinian refugees. The plan even gives Israel ultimate authority over which refugees will be allowed to return to the hypothetical Palestinian state.

The Trump plan also raises the disturbing possibility that the “Triangle Communities,” a predominantly Arab region in northern Israel, could be transferred to a future Palestinian state in exchange for territory elsewhere. A land swap of this kind, which would also constitute a population swap, would almost certainly entail stripping the roughly 300,000 Arabs living in the “Triangle” of their Israeli citizenship. (This idea was, not coincidentally, a pillar of the racist, anti-Arab campaign run by former Defense Minister Avigdor Lieberman’s right-wing Yisrael Beteinu party in the 2015 elections.)

But given that this plan is unlikely ever to be implemented, the details are ultimately less important than the political response, which remains uncertain. Although Netanyahu appears poised to begin the annexation process, Tuesday’s announcement of the Trump proposal also coincided with the announcement of Netanyahu’s indictment on corruption charges in three different cases (Netanyahu is the first sitting Israeli prime minister to be indicted). Planned in close collaboration, Trump and Netanyahu’s joint announcement intended to distract from their respective political and legal struggles—Trump currently faces impeachment proceedings in the Senate—but Netanyahu’s criminal indictment could hamper his plans perhaps as much as they could fuel them.

Much also depends on the Palestinian leadership. While Abbas has promised a dramatic response to the Trump proposal, it remains unclear what that response will entail. Over the past several years, Abbas has, in periodic bouts of exasperation with Israeli intransigence, pledged to end security cooperation with Israel, but he has never followed through on a permanent basis. De jure annexation could be the final straw that forces Abbas to end security cooperation, which is perhaps the most significant form of leverage the Palestinian Authority has over Israel. Without such cooperation, the status quo in the West Bank would be unsustainable. And if Israel moves forward with annexing nearly all of its settlements in the occupied West Bank, it would likely provoke significant protest and unrest across the Palestinian territories, as well as beyond them (for instance, in Jordan).

The overarching message sent by Trump and Netanyahu on Tuesday—a message reinforced by Jared Kushner’s appearances on cable news yesterday and today—is that this was not a peace plan but a threat directed at the Palestinians: accept the terms of the proposal—a $50 billion investment in a farce of a state—or reject them and risk losing everything. Trump admitted as much in his characteristically blunt remarks. “Today’s agreement is a historic opportunity for the Palestinians to achieve a state of their own,” he said. “After 70 years of little progress, this could be the last opportunity they will ever have.”