Six detainees’ dramatic escape from a maximum-security Israeli prison has sparked demonstrations across the occupied territories and shifted Palestinians’ sense of what is possible. 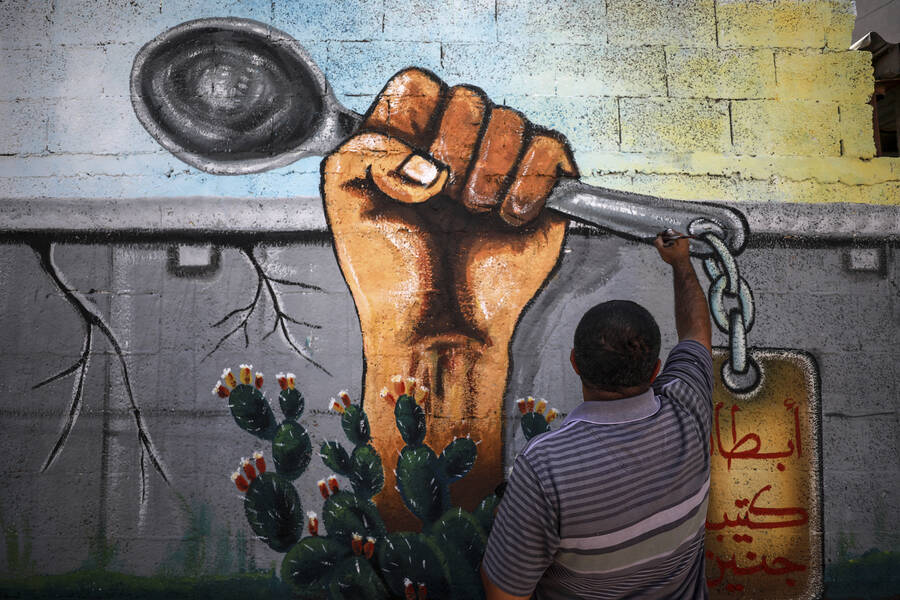 AFTER SIX Palestinian detainees escaped the maximum-security prison of Gilboa in northern Israel on September 6th, mass euphoria reverberated across the occupied Palestinian territories. Celebrations erupted in the West Bank cities of Jenin and Hebron as well as in Gaza: People on the street waved flags and handed out sweets while drivers honked their horns in jubilation. To many, the prison break was a symbolic victory over the occupation and its infrastructure, and a thumb in the eye of the Israel Prison Service (IPS), which has said that Gilboa’s prisoners are more securely guarded “than the money in Bank of Israel safes.” On social media, people posted pictures of spoons, in reference to the ones the escapees reportedly used to dig a 20-meter tunnel out of Gilboa. They also shared memes of Zakaria al-Zubeidi, one of the six fugitives—formerly a leading figure with the al-Aqsa Martyrs Brigade, the largely defunct armed wing of Fatah, the dominant political faction in the West Bank—photoshopped into a poster for the American TV series Prison Break. Online, many prayed for the escapees’ safety. In Jenin, leaders of the militant political movements Hamas and Islamic Jihad called on anyone who encountered the escapees to provide them with food and shelter.

The next week, after four of the six detainees had been recaptured inside Israel, the mood among Palestinians was somber. In the West Bank city of Ramallah, a taxi driver told me that his mother had spent the night crying. A sign posted on a nearby store—shuttered at midday on a Monday—explained simply: “I’m too depressed to work today.” Anger and disappointment rippled across social media amid calls for mass protests in the West Bank. On September 17th, demonstrations broke out in downtown Ramallah, at the Qalandiya checkpoint, and in Hebron’s al-Fawar refugee camp. At the al-Jalamah checkpoint near Jenin, several hundred Palestinians protested, setting fire to tires and hurling stones and Molotov cocktails at Israeli soldiers.

Israel’s imprisonment of Palestinians has long been a galvanizing issue across the occupied territories and inside Israel. While Israelis tend to label detainees as terrorists, Palestinians view them as political prisoners resisting an illegal occupation that imposes its will through systemic violence: Many of the Palestinians in Israeli prisons are there for infractions like throwing stones at Israeli security forces, or for their membership in Palestinian political factions that are banned by Israel. According to Palestinian Authority (PA) statistics, Israel has detained more than 805,000 Palestinians since 1967—amounting to 20% of the total Palestinian population in the occupied territories. Today, according to the prisoners’ rights organization Addameer, there are approximately 5,000 Palestinians in prison, including 173 children and 14 elected members of the now-defunct Palestinian parliament. Addameer reports that 145 of these detainees are being held without charge or trial in what’s known as administrative detention and 494 are serving life sentences. Reverence for these prisoners is such an integral part of Palestinian society that posters bearing their names and faces paper the walls of every city, town, and village, and when prisoners stage mass hunger strikes for better conditions—as they did from within six prisons inside Israel in 2017—Palestinians often hold protests and shut down businesses in support. 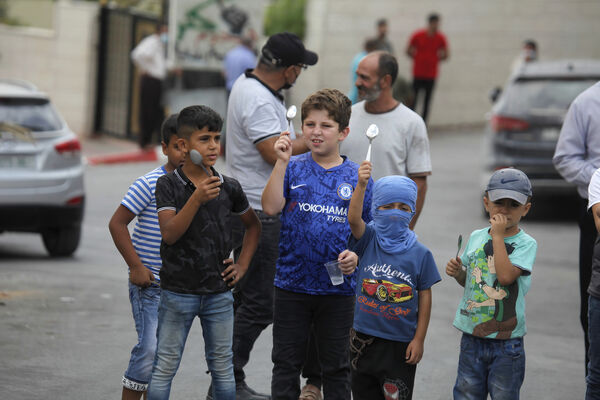 In the wake of this escape, however, political unity has been complicated by rumors that the first two detainees were recaptured after Palestinian citizens of Israel informed police that they had seen two suspicious men in the northern Israeli city of Nazareth. The rumors turned into reports circulated by Israeli news outlets, and eventually by international media as well. Many Palestinians in the West Bank have expressed doubts about this narrative, calling it an effort to sow division between them and their compatriots on the other side of the Green Line. In one representative comment, Issam Aruri, director of the Jerusalem Legal Aid and Human Rights Center, wrote on Facebook that “every irresponsible exchange based on the Hebrew press may stir up strife.”

Even after the last two men were recaptured on September 19th, details of the escape have continued to leak out in the press, cementing the prisoners’ folk hero status and shifting Palestinians’ sense of what is possible. In the Palestinian political imagination, “this issue hits two nerves—one of empathy with what prisoners face, and another, metaphorical connection to what their situation symbolizes,” said Fadi Quran, campaigns director at the activist network Avaaz, who took part in a few of the vigils in Ramallah to support the detainees. “You can see why this prison break created a tidal wave of hope for Palestinian society. The miraculous breakout from Israel’s most high-security prison showed that freedom, even in the darkest of circumstances, is possible with persistence and ingenuity.”


THE ESCAPE also prompted a crackdown within Israeli prisons that has not ended with the six men’s recapture. Even prior to the jailbreak, conditions in the prisons were dire: As Addameer has reported, detainees are rarely allowed access to public phones, and are generally limited to receiving visits only from close relatives, and only once a month; visits can also be canceled without explanation. On September 9th, the Red Cross, which facilitates family visits to detained Palestinians, reported that Israel was barring such visits in all prisons until the end of the month. The suspension drew widespread anger and accusations that Israel was engaging in collective punishment, in violation of international human rights law. Palestinian political factions, including Hamas, called for a “Day of Rage” in protest, urging Palestinians to take part in marches and “clash with settlers.” Though Israeli authorities ultimately reversed the no-visit policy on September 15th, they tightened security in other ways, placing some detainees in Gilboa and other prisons across the country in solitary confinement, and increasing searches of cells along with the number of guards in each prison.

In response to the crackdown, detainees set nine cells on fire across two different prisons—Ketziot in the Naqab (Negev) desert and Rimon in southern Israel—and vowed to wage a mass hunger strike if Israeli authorities did not reverse policies that were put into place when the six men escaped. The hunger strike has since been called off pending talks with Israeli prison authorities about the prisoners’ demands.

Most of all, Israeli authorities seem intent on disrupting coordination among prisoners. Inside, detainees organize themselves according to political affiliation, and each wing has an elected representative who speaks for the group in front of the IPS. After the prison break, authorities broke up these representative systems, transferring 400 political prisoners—who, like all of the escapees except Zubeidi, were affiliated with Islamic Jihad—to different prisons.

“The prisons are major hubs of political activity,” said Diana Buttu, a former legal advisor to the Palestinian Liberation Organization. She pointed in particular to “prisoner initiatives that attempt to break the impasse between the Palestinian political parties”—such as talks within prisons to reconcile the sparring factions Hamas and Fatah—and “movements that challenge the occupation.”

For many Palestinians, prisoners’ political resistance stands in sharp contrast to the collaborationist strategy of the PA. The PA’s most visible response to the escape has been to dispatch letters to the parties of the Fourth Geneva Convention—countries that have ratified international legal standards that deal with civilians in armed conflict and occupied territories—calling for the prisoners’ protection. But the authority is not otherwise expected to intervene in the crackdown, since Palestinian President Mahmoud Abbas has made security cooperation with the Israeli military a bedrock piece of his politcal strategy. Abbas relies on the Palestinian security services, including both police and intelligence services, to cement his grip on power by brutal physical force and intimidation; the same forces work actively with the Israeli army to coordinate arrests, detention, and interrogation. The PA’s security forces have also detained activists formerly imprisoned by Israel, such as Khader Adnan, who was imprisoned in August while protesting the murder of prominent PA critic Nizar Banat.

“It’s not only Israel that’s imposing prison bars. It’s the PA that’s actually enforcing them,” said Amjad Iraqi, a policy analyst with Al-Shabaka, a Palestinian think tank. “Their job is to use security forces to try to prevent confrontations between Palestinian protesters and the Israeli military. It’s to try to undermine any attempt by Palestinians in those areas to resist. The goal is to keep people in their cages.”

The escapees themselves have been beaten and brutalized since their recapture. Zubeidi, who was detained on September 10th, is now suffering from broken ribs, as well as face and head injuries, according to his legal counsel. “Zakaria is in a difficult situation,” said his brother Jibril Zubeidi. “He has been subject to horrific treatment, such as long interrogations, sleep deprivation, and physical assault, and isn’t allowed to make a phone call or to have any family visits.”

Though it is too early to predict the long-term political effects of the escape, there is no doubt that the prison break has pierced Israel’s seemingly impenetrable security and surveillance network. This network, which anthropologist Jeff Halper has termed a “matrix of control,” is pervasive in Palestinian life, determining where people can live, what schools they can attend, and, in some cases, whom they can marry. Evading such all-encompassing domination, even briefly, was worth the price, according to the prisoners themselves. Escapee Mohammed Al Ardeh’s lawyer said his client wandered Israel, trying to feel a sense of liberation—both from prison and from daily life under occupation. “I went around the areas of Palestine occupied in 1948,” he is said to have told his interrogators. “I was looking for my freedom and to see my mother.”

Dalia Hatuqa is a journalist who specializes in Palestinian and Israeli affairs.

Report
In Protests, the Naqab Affirms Its Palestinian National Identity
In the Naqab region of southern Israel, as in East Jerusalem, the struggle over land is at the heart of the Palestinian question.
Dalia Hatuqa
Sign up for our email newsletter, featuring exclusive original content
Want original reporting and analysis on Israel/Palestine?
Sign up for the Tuesday News Bulletin.