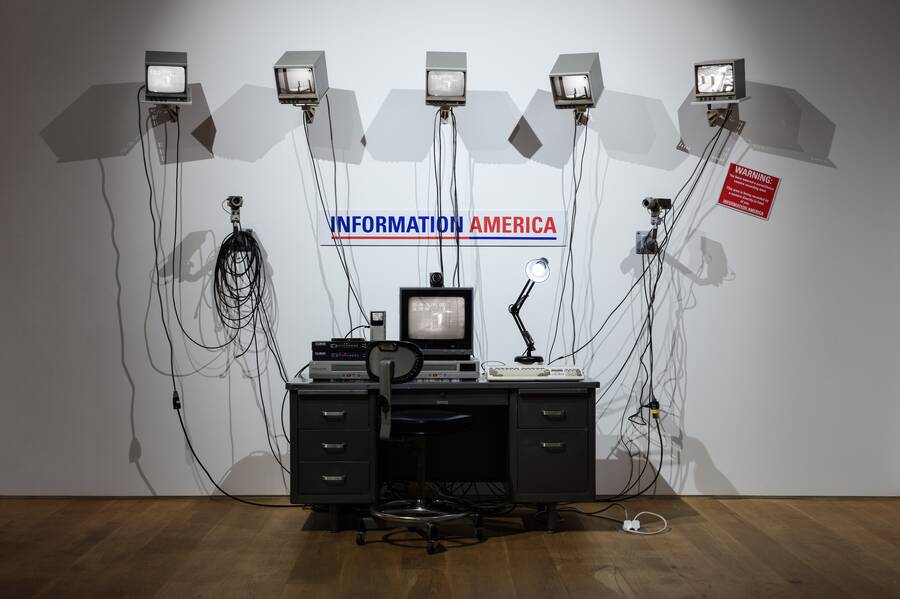 AT ORTUZAR PROJECTS, a gallery in New York, a cube-shaped monitor hangs from the ceiling. It's one component of Mothers Under Surveillance, a 1993 work by the Hollywood-born, Cologne-based artist Julia Scher. Supported by a metal apparatus, the monitor tilts downward, as if addressing the viewer below. Looking up, one notices another object perched atop the apparatus’s carriage: a security camera, likewise pointing down. The viewer expects to see her body on-screen, a sight familiar to anyone who’s shopped at a convenience store. This expectation is fulfilled, but only for a moment. The screen quickly cycles through two other feeds: a sterile, empty hallway; a group of older women in what looks like a retirement facility. All three scenes are stamped with the current time and date, suggesting a sort of co-presence, but in reality, the work’s titular “mothers” were filmed in another time and place—New Jersey in the early 1990s.

Mothers Under Surveillance is one of nine works on display in Julia Scher: American Promises, the artist’s first solo exhibition in New York since 2002. Spanning much of Scher’s underrecognized career, they employ a variety of media—from monitors and cameras to marble and mattresses—to address a fairly focused set of questions about surveillance. How does surveillance affect self-perception, or shifting definitions of safety and security? What about the boundaries between public and private, reality and simulation? In Mothers Under Surveillance, it’s this last inquiry that preoccupies the viewer. “What was always scary to me was that people mistook or misread fake as real and real as fake,” Scher said in an early-2000s interview with the writer Lynne Tillman. Yet Scher encourages such misreadings in her own work, prompting the viewer to appreciate her position in determining surveillance’s “truth.” What can we learn from the shared experience of being watched—and from watching the watchers?

BORN IN 1954 to a failed-actor father and a gift-wrapper mother, Scher absorbed postwar Los Angeles’s visual culture: the proliferation of moving images on film and TV; the queasy interplay of the city’s hyperreal built environment and its diverse natural landscape. In the early 1980s, as a young landscape painter studying art in Minneapolis, Scher was inspired by a photograph of El Salvador by photojournalist Susan Meiselas, in which, as Scher would later recount, “no human figure was visible, and yet it was clear that the scenery was being monitored.” She incorporated this observation into her own “empty” landscapes; in an early piece, she affixed a camera to a painted canvas, a move toward the multimedia art she has been making ever since.

Though wary of state surveillance, Scher became interested in personal security. While working as a janitor at an aerobics studio, she used her growing knowledge of home- and business-security technologies to install systems for some of the studio’s patrons. In 1986, she started her own short-lived security company, Safe & Secure. The enterprise was in part an effort to help local women feel safe and in part a reckoning with her own childhood, one marked by parental neglect (she has described her father as “the guardian who couldn’t guard”). Scher speaks candidly about her upbringing in Discipline Masters (1988), the earliest work on display in the exhibition. The piece is a lengthy proto-vlog in which Scher discusses her childhood, taking breaks to dance and lip sync for the camera—a thirtysomething roleplaying as a teenager. In one sequence, Scher parses The Police’s stalker anthem “Every Breath You Take.” “Every move you make: motion detector,” she tells the camera matter-of-factly, as if her word association reflected an obvious exegesis. “Every bond you break: polygraph.” In another scene, she dances unabashedly (and without commentary) to U2’s “Pride”; taken together, the moments summon the typical teenage experience of listening to music in one’s room, switching between self-satisfied critique and carefree enjoyment.

In the early 1990s, Scher moved to New York and became part of the city’s downtown art scene. By then she had put the security business aside, instead fully embracing its technologies both as artistic materials and objects of critique. Like Andy Warhol, who got his start in advertising, or Gretchen Bender, whose critical video art coincided with commercial work (and who, like Scher, is currently the subject of an overdue New York exhibition), Scher brought specialized knowledge to burgeoning artistic concerns. The piece in the exhibition that most clearly illustrates Scher’s technical expertise is Information America (1995), which comprises a desk, monitors, cameras, cables, and other security accoutrements. “WARNING,” a wall-mounted sign proclaims. “You have entered a surveillance camera recording area.” Like Mothers Under Surveillance, the piece shuffles across feeds, offering views into unknown sites as well as multiple perspectives of the gallery space. A viewer looks at the camera on the left expecting to see her face in a nearby monitor, but instead sees her profile, captured by a camera on the right. Such palpable experiences of surveillance’s totalizing reach are less familiar today, since surveillance now connotes invisible data collection rather than visible bodies. In the age of automated facial recognition, one needn’t see her face reproduced in an iPhone to know that someone else can access the image.

Scher, an early adopter of the internet (she produced net-based artworks in the mid-1990s), appreciates the evolution of the meaning of surveillance, and has continued to employ new technologies in her work. But she also continues to engage with older, screenless methods of surveillance. Two pieces in American Promises don’t include monitors or cameras at all: Girl Dog (Hybrid) (2005) and Glückshaube (2006) are marble sculptures depicting, respectively, a muscular watchdog and a security guard’s cap. These objects activate “security” simply by sitting there, heavy and inert. Michel Foucault famously argued that a guard doesn’t have to be physically present in a prison watchtower in order for the watchtower to enforce obedience among prisoners. As viewers walk through Ortuzar Projects, they can escape the view of a given camera, but the dog and “guard” remain visible, standing in for the authorities behind the lenses.

Glückshaube also references Scher’s series Security by Julia, in which the artist outfits exhibition spaces with boutique security systems overseen by pink-uniformed guards wearing (non-marble) hats of the same design. The sculpture originally comprised part of an installation that mapped the path Jews walked toward a train station in Wiesbaden, Germany, en route to the death camps. There, rather than identify a particular institutional employee, the hat stood as a monument to the lasting effects of surveillance’s infrastructures. In Discipline Masters, too, those effects breed trauma: Scher often returns to stories of her neglectful if not abusive parents, of growing up “in a place where I was being watched but wasn’t being protected.” Scher elaborates throughout the video: her mother—both voyeuristic and cross-eyed—was able to look in two directions at once, like a proto-CCTV. In Scher’s work, the desire to be protected gives way to a demonstration—through references to camps, prisons, the Patriot Act, the NSA—of the ways in which “watching” almost always persecutes rather than protects the watched.

WHILE SCHER might be the contemporary artist most focused on surveillance, she’s far from the only one. There’s Bruce Nauman, whose rigged CCTV systems were on display this year at MoMA and whom Scher counts as an influence. Right now, at the New Museum, an even earlier piece—Marta Martajín’s pioneering La Menesunda (1965)—includes real-time surveillance footage as part of a totalizing spectacle, while at the Whitney Biennial, Nicole Eisenman is broadcasting the museum’s top-floor gallery to a monitor on a patio below. Besides playing phenomenological tricks, surveillance art often levels an institutional critique, subverting the hidden or neutral gazes of art spaces by turning viewers’ eyes to things they’re not supposed to see. Scher is critical, too, but as her works—and her erstwhile business endeavor—make apparent, she also has a vested interest in security’s enforcement.

The newest piece in American Promises is North to South (2019), a site-specific sound installation in which Scher’s disembodied voice guides visitors through the gallery. Some of her statements are matters of fact (“You are at column number three”), but others editorialize, pointing out that, while many forms of surveillance are indefensible, everyone still wants to feel safe. “You love the dogs when they protect you,” she says. “You love the information when it proves you’re here.” For those of us who grew up with the internet and after 9/11, Scher’s work attests to a longer history of surveillance anxiety—and to the pleasure we take from its mechanics. Seeing one’s face on the monitors is thrilling, and many viewers seem inclined to take the thrill even further by posting surveillance selfies to Instagram. We know the hazards, but we still rely on surveillance to make us feel like we’re here.

In 1994, two years before the internet lifecaster Jennifer Ringley set up her webcam, Scher initiated the series Surveillance Beds, which underlines the kinship between discipline and pleasure. “You love the bed even when it hurts,” she says in North to South. Near the speaker, one of the final manifestations of the Beds series, Mama Bed (2003), is cast in red light, with cameras and small monitors attached to the bed, a whip lying atop it and VHS tapes stashed underneath. An assemblage of signs that signify pleasure and pain, security and danger, Mama Bed offers the possibility of surveillance as a kind of analogue to BDSM, in which each individual can determine whether a camera, a whip, or leather straps, make her feel “safe” or not. Despite the trauma her mother inflicted through surveillance, Scher suggests, Mama gave her a complicated gift by conditioning the artist to likewise create her own peculiar system of watching. In her work, Scher passes that vision along to us: looking at her surveillance cameras, one embodies the position of both watcher and watched. The question is whether, as with a “safe word,” we can delineate what feels secure.

Joe Bucciero is a writer born in Chicago and based in Princeton, New Jersey. 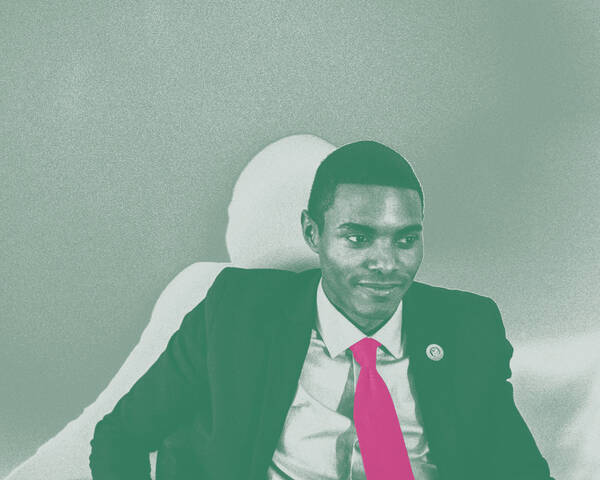